I hear you. While the growing research and awareness of advanced metrics has brought the fantasy community closer to understanding the beautiful randomness that is the NFL, it has also given birth to some dangerous analysis and predictions. Statistics can be improperly used to confirm biases and support false narratives, while data has grown to the point of overflow, making it difficult to determine what actually matters.

College Target Share is a recent addition to PlayerProfiler’s list of advanced metrics for running backs, but it’s not just another number. Instead, it provides valuable insight into the expected role of NFL running backs.

The accuracy and ease of fantasy predictions grows when we know, or at least have an educated guess, what a given player’s role will be. For example, consider the NFL role and production of a rookie running back. Metrics like College Dominator and SPARQ-x can obviously shed light on that player’s NFL potential and range of outcomes, but it still might not be clear how that player will be utilized by their team. This is a significant concern, because the difference between and an early-down back, a third-down back, and a workhorse back could be a drastic amount of fantasy points. By looking at a player’s College Target share, or the percentage of all passing targets directed at a particular player in college, the picture becomes much clearer.

Considering football’s glory days were dominated by iconic running backs, it’s hard for the fantasy community to shake their habitual infatuation for two-down grinders. It’s understandable. Who doesn’t love watching Eddie Lacy bowl over defenders, or LeGarrette Blount leap over a safety? Those types of plays generate excitement. But the league continues to lean towards the passing game, because of its higher efficiency. This is precisely why running backs with catching ability have become valuable assets in fantasy.

The following chart shows the top 20 Production Premium scores among running backs in 2015, along with their College Target Share. 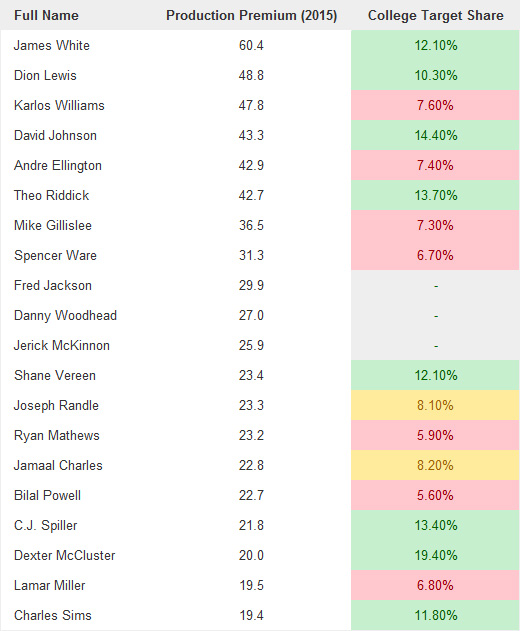 If a stranger on the street was asked to name the most efficient running backs in the NFL, chances are Adrian Peterson or Le’Veon Bell would be among the names listed. James White or Theo Riddick? Probably not.

This isn’t to say a player like Adrian Peterson isn’t good—he most definitely is. But when it comes to efficiency, the players with the highest scores are the pass catchers, or “space-backs.” Catching the ball out of the backfield simply provides running backs the ability to work with more space, which increases their chances of creating higher-yardage plays. It’s why Shane Vereen, Bilal Powell, and Dexter McCluster are among the most efficient backs in the league, even though they aren’t highlight-reel regulars.

So How Do We Use This?

Where College Target Share truly shines is its ability to recognize pass-catchers who may not otherwise be thought of as pass-catchers. For example, it should come as no surprise to see players such as Dexter McCluster, Giovani Bernard, and Theo Riddick with College Target Shares above the 90th-percentile. They’ve played featured roles in the passing game since entering the league. But what about other players in the running back landscape? Are there hidden gems with the capability to dominate the workload in the backfield? Or, on the reverse end, are there backs with only two-down skillsets fooling people into thinking they are a workhorse?

Below is an interesting list of running backs and their College Target Shares, followed by individual analysis of each player. 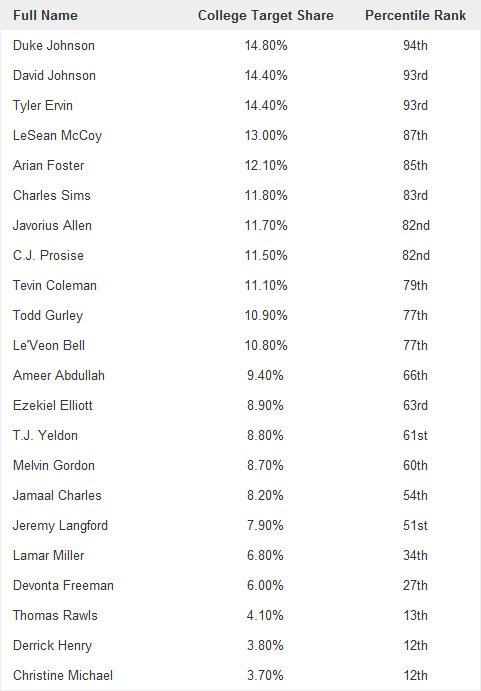 1) Charles Sims is another player with all the traits of a workhorse back, and now Doug Martin is scheduled to miss multiple weeks with a strained hamstring.  Sims’ efficiency in all facets of the game puts in instantly in the fantasy RB1 conversation heading into week 3.

2) The first player to immediately stand out is David Johnson. With ridiculous, upper-percentile measurables in seemingly every category, it’s completely obvious he will be a workhorse for the Cardinals—and a dominant one, at that. His Snap Share, Opportunity Share, and production in week one clearly demonstrated this.

3) LeSean McCoy, Arian Foster, Le’Veon Bell, and Jamaal Charles are shown simply for reference purposes. They’ve been bell-cow running backs throughout their careers, and they’ve been consistently known for their prowess in the passing game—something foreseeable, considering their College Target Share values are all above the 50th-percentile.

4) Duke Johnson is a very good receiver. And while he hasn’t shown well as a runner thus far, Isaiah Crowell hasn’t been any better. Should Cleveland decide to lean their RBBC more heavily towards Johnson, he could reach RB1 status.

5) The Texans backfield is interesting. Rotounderworld Radio has consistently mentioned how Lamar Miller is a fake bell-cow.

6) If you’re still convinced Thomas Rawls or Christine Michael can be workhorses in Seattle, you clearly forgot about why the Seahawks drafted C.J. Prosise in the third round.

7) Viewing the stats of the week 1 game between the Falcons and the Buccaneers is like sweet bliss. Tevin Coleman (79th-percentile College Target Share) lead Atlanta in both receptions (5) and receiving yards (95), while Devonta Freeman (27th-percentile College Target Share) hauled in 4 catches for 20 yards. It’s a full-on RBBC, folks, and Coleman is the back to own. (Now if only Devonta Freeman were to slip and fall in the shower…)

8) Todd Gurley might be even better than we suspected. He proved to be an effective runner at both the college and NFL level (albeit, for one season), and it shouldn’t come as a surprise if he becomes more heavily involved on passing downs. Unfortunately, the Rams are already looking like the worst team we may ever witness.

9) With the news that Ameer Abdullah sprained his foot in week 2, the fantasy football world turns its attention to Theo Riddick and Dwayne Washington.  Both efficient pass catchers who are nifty in space, but at 223-pounds, only Washington has the requisite size to be a primary NFL ball carrier.

10) T.J. Yeldon will be the main space-back in Jacksonville, but if/when Chris Ivory misses time (like he did in week one), Yeldon is in play as an RB1-RB2.

11) With no one capable of challenging him, Jeremy Langford’s stronghold on the Chicago backfield isn’t going anywhere.

12) Ezekiel Elliott and Derrick Henry appear to be who we thought they were, as Elliott looks to be a workhorse, and Henry looks more like a two-down back. It’s possible that Kenyan Drake’s effectiveness simply limited Henry’s chances to prove himself as a pass-catcher at Alabama, but the data shows the odds are stacked against him becoming a bell-cow.

13) Javorius Allen had some impressive fantasy performances in 2015, thanks to his work in the passing game. His 82nd-percentile College Target Share shows his worth in a Ravens’ backfield that is somehow currently being led by Justin Forsett and Terrance West.  If Allen remains a gameday inactive, don’t be surprised if he soon resurfaces on a different RB-deficient NFL depth chart.