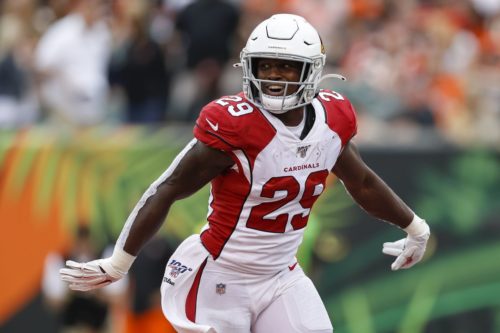 A key to winning consistently in fantasy football is using advanced stats and metrics to identify potential breakouts before they happen. Stashing players that would become hot adds with a big game before others have a chance to acquire them is a winning strategy in any format. Pinpointing these kinds of hits with any consistent success is inherently difficult. Entering any given week, these widely available players have enough obstacles to overcome on the path to consistent fantasy relevancy to keep the general public off of them. Still, with 12 regular season weeks remaining, there’s plenty of free meat to pick from the proverbial fantasy football bone.

Chase Edmonds was a popular late round flier at the end of drafts this past summer. The thought process was that if Kliff Kingsbury and his Air Raid squad planned on breaking the record for plays run per game, then Edmonds would have some standalone fantasy value while spelling David Johnson. That hasn’t come to fruition, with Edmonds only mustering a 22.4-percent (No. 61 among qualified running backs) Opportunity Share to this point in the season. Dropping him after the first few weeks was understandable, though he now needs to be rostered in all formats given Johnson’s back injury.

Though Johnson is likely to suit up against Atlanta, there’s still a chance that he sits. This scenario would make Edmonds a seasonal league smash play and a DFS lock. Even if Johnson plays, there’s reason to believe the team will continue to give Edmonds increased opportunities. One reason is their opponent. The Falcons may have a good run defense on paper, but it’s hard to ignore the fact that Houston just dropped 53 points on them. There’s also the fact that the Cardinals rank No. 1 in rushing DVOA per Football Outsiders. There’s also the high likelihood that Johnson will split more work with Edmonds than usual, paving the way for the latter to improve on his season-high 11 touches from last week.

With bye weeks and injuries taking more of a toll on fantasy teams by the week, there are a few plug-and-play options available for teams that need wide receiver help. One that immediately comes to mind is Albert Wilson. A RotoUnderworld favorite, Wilson only played six Week 1 snaps before suffering a calf injury that has sidelined him since. In those six snaps, he mustered four targets and a rush attempt. The four targets give him an absurd 57.1-percent Hog Rate, albeit on the tiniest of samples. Rookie Preston Williams has been impressive, but this game will go a long way towards telling us who is the wide receiver to roster in Miami. Though Wilson being projected to match up against Fabian Moreau, PlayerProfiler’s No. 104 ranked cornerback, certainly helps his cause.

Coming off a 100-yard performance, Byron Pringle stands out as another plug-and-play option in a game with the week’s highest implied point total. Pringle played more snaps than Mecole Hardman and out-targeted both Hardman and Demarcus Robinson after Sammy Watkins left Week 5 with an injury that will sideline him again this week. With Tyreek Hill likely to be on a pitch count/used as a decoy if active, Pringle should see five-plus targets and has splash play upside.

Making his second Tomorrow’s Newspaper appearance of the season, his first since Week 1, is KeeSean Johnson. The ankle and hamstring injuries suffered by Christian Kirk and Damiere Byrd will render them game-time decisions, though Kirk is not expected to suit up. This makes Johnson an autoplay, especially given the juiciness of the matchup against Atlanta. The possibility of Byrd (if he plays) and/or David Johnson being limited is enough to lead us to believe that KeeSean can threaten double digit targets for the first time since Week 1. Kyler Murray‘s rapid improvement will help lead Johnson to an eventual breakout game. Make sure he’s on your roster when it happens, which may be this week.

Teams with winning records can focus more-so on stashing wide receivers with longer term upside. One wide receiver that has both long and short-term viability is Jake Kumerow. Davante Adams‘ turf toe injury may sideline him for longer than anticipated. We already know that Aaron Rodgers trusts Kumerow, which is half the battle. Against the Cowboys in Week 5, Kumerow played 48 snaps and ran 20 routes. He only drew two targets, but one was a deep target and he was tackled at the one-yard line on the other. The pride of UW-Whitewater makes for a fine desperation dart throw against the Lions on Monday Night Football. One with potential longer-term viability.

Marquise Brown hasn’t practiced all week due to the ankle injury he suffered in last week’s game and is in danger of missing Week 6. Between this and the dreaded Lisfranc injury that prevented him from participating at the NFL Combine, it’s time to stash Miles Boykin. Though his college efficiency metrics were middling, his athleticism is off the charts. The Ravens haven’t yet needed to utilize his skill-set on a consistent basis. Regardless, he has already translated this elite athleticism to on-field efficiency when called upon. The odds that the Ravens lean on the run against the lowly Bengals keep Boykin in stash territory for now.

The schedule doesn’t let up for the Cleveland Browns until a few weeks after their Week 7 bye. Although it’s fair to assume that the return of Rashard Higgins will help the offense in general. Antonio Callaway is not equipped to be the third option in this team’s passing game. Higgins, meanwhile, ended 2018 with a +35.1 (No. 2) Production Premium and a +31.7-percent (No. 10) Target Premium while averaging 2.19 (No. 12) Fantasy Points per Target. The play calling must be better in order for any contributions he makes to matter. Still, it’s fair to wonder whether the return of Hollywood Higgins will help in that regard.

Justin Watson‘s time is coming. Breshad Perriman is out for Week 6 and, if you know anything about this series, you’ll know I won’t be recommending Bobo Wilson or Scott Miller as stashes. Rather, the 91st-percentile SPARQ-x athlete with the 98th-percentile College Dominator Rating should be the player on the radar of fantasy gamers as Tampa’s ultimate upside stash. He hasn’t yet seen meaningful playing time, but all it takes is one blowup performance in the event of a down game for Mike Evans or Chris Godwin for the fantasy world to finally get woke to Watson.

It’s been rough sledding for those who weren’t fortunate enough to come away from their drafts with an elite tight end or a late round breakout such as Mark Andrews or Darren Waller. Those who need a Week 6 plug-and-play at the position can do worse than Jeremy Sprinkle. With Vernon Davis out and Jordan Reed on injured reserve, the Washington tight end with the 105.0 (79th-percentile) Speed Score makes his third Tomorrow’s Newspaper appearance of the young season. Right in time for a game against a Miami team allowing +2.02 (No. 6) fantasy points above the mean to the position. Sprinkle’s impressive metrics include 2.04 (No. 4) yards of average Target Separation, a 91.7-percent (No. 6) Catchable Target Rate and an 11.0-percent (No. 22) Hog Rate in the face of a 40.8-percent (No. 56) Snap Share.

Those who don’t want to stomach the thought of rostering a Washington player can consider Jacksonville’s Geoff Swaim. With James O’Shaughnessy on injured reserve and third-round rookie Josh Oliver out with a hamstring injury, Swaim projects to see a near every-down role for the Jaguars against New Orleans. The matchup is middle-of-the-road, but the opportunity should be enough to provide a reasonable Week 6 floor.

Those in leagues that start two or more tight ends that want to play the long game should consider adding Green Bay’s Robert Tonyan. Jimmy Graham has seen more playing time in Davante Adams‘ absence. Tonyan, a converted wide receiver, would be the high-upside stash over Marcedes Lewis in the event that Graham begins to wear down and/or suffers an injury of his own as a result of his increased usage. He’s already seeing a 10.5-percent Hog Rate despite his measly 23.8-percent (No. 76) Snap Share.