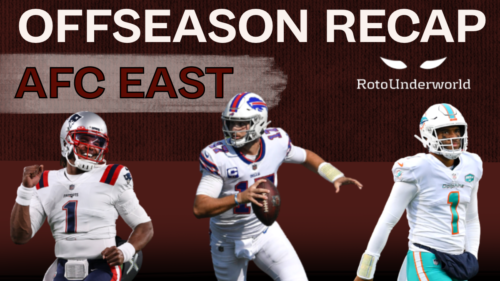 In the few short weeks since the conclusion of Super Bowl 55, the NFL landscape has changed drastically, with many teams taking entirely new forms. PlayerProfiler is a one-stop shop for all major moves, power rankings, and honest expectations for all 32 NFL teams heading into the NFL Draft and training camp.

Each team will be broken down as follows:

Overall Ranking: No. 4 (Above Average)

I have no love for the Buffalo Bills, but I can’t find any significant shortcomings for this team. Josh Allen is an upper-tier quarterback, the offense can score at a high level, and the defense has enough talent to finish games. Sean McDermott enters his fifth year as head coach, and both coordinators enter their fourth year. The team has no notable departures to move the needle on total wins/losses.

Many fans will cite Baltimore’s regression from 2019 to 2020 as the model for what to expect this year from the Bills. That is a lazy take. Buffalo will continue to succeed because unlike the Ravens, they succeeded through the air with an emphasis on Allen’s arm talent, not his rushing ability. The Bills will be the hardest team to beat on Sundays outside of the league’s elite. I will note the Bills were 4-1 in one-score games last season, which contributed to their bloated 13-3 record. I’ll add two losses due to W/L regression and settle this team at 12-5 in 2022.

Fantasy Implication: Target all those tethered to Josh Allen, i.e. his pass catchers, not the running backs

The Dolphins are well aligned to be 2021’s biggest riser IF Tua Tagovailoa is the league’s next breakout quarterback. Miami is creating an environment for Tua to thrive. He has a new weapon in Will Fuller and more to come in the 2021 NFL Draft. The team returns most of their offensive linemen and should have the option to draft a top tackle at the No. 6 spot. With Brian Flores entering his third year, and with promotions from within to fill the offensive coordinator role, the coaching staff continues to grow together. The defense carries enough talent and coaching consistency to remain efficient.

The only major question is Tagovailoa himself. I believe in Tua. It was not that long ago when fans were chanting “Tank for Tua” at Hard Rock Stadium. He had a devastating injury entering the NFL and still managed half a season of meaningful reps in 2020. His confidence in his body will return in time, and I believe enough time has passed. Miami’s soft-ish schedule should help bloat the win total.

Fantasy Implication: Target the primary weapons if they are available at value, but don’t reach on a dream

Bold Prediction: Tua breaks out and Miami wins the division with 11-plus wins

With a difficult schedule in 2020, and a roster devoid of talent, New England’s fall from grace was swift. Bill Belichick overhauled the talent on this roster with a historic free agency spending spree, loading his team with multiple interior players on both sides of the football.

The New England Patriots finished 27th in Scoring in 2020

They have added 4 weapons in the first 24 hours of Free Agency!

Are the Patriots back? ? pic.twitter.com/kabkWw97rl

The coaching remains unchanged, and the interior talent will give Belichick the kind of edge on Sundays that he is used to. Cam Newton is polarizing, but he brings a winner’s mentality to the field every day and has serious upgrades around him. The football product will improve, but the wins will remain average. Impressive as it was, one offseason of spending cannot heal Newton or bring Tom Brady back.

Fantasy Implication: Newton will be the only reliable weekly option. The rest will present good value later in Underdog Best Ball drafts

Overall Ranking: No. 26 (Below Average)

Tell me if you’ve heard this one before: “Things are looking up for the Jets after a god awful season.” It’s true, the Jets are once again in a great position to improve upon an otherwise unwatchable football product. The bar is low after playing at a collegiate level in 2020, but the hope may be genuine this time around. Joe Douglas’ 2021 offseason moves boast the analytics-driven philosophy that helped build a Super Bowl roster in Philadelphia in 2018. Robert Saleh (hopefully) will bring forward-thinking game planning that utilizes his players’ strengths.

Who will be Quarterback for the Jets in Week 1? pic.twitter.com/uY8WvyMJrn

The chance to improve at quarterback with the NFL Draft’s No. 2 selection places the Jets firmly on the path to relevancy. The notable difference between 2021’s free agent haul and that of previous failed years is the emphasis on upside. Rather than overspending on overhyped names like Le’Veon Bell, C.J. Mosley, and Trumaine Johnson, the Jets targeted undervalued pros (Sheldon Rankins, Corey Davis) and potential breakout stars (Carl Lawson). Keep the expectations low in Saleh’s first year and just pray this team is watchable on Sundays.

Expectation: Be competitive at a professional level and win 5-7 games

Fantasy Implication: In a “tryout” year for the Jets, I would only target cheap guys who could climb the depth chart, so mostly any rookies they may draft at WR/RB

The AFC East is the division of potential in 2021 with a looming Tua Tagovailoa breakout, some new faces in New York, and an entire Patriots organization hanging on the edge. The division matchups for 2021 include the NFC and AFC South divisions. The strength of schedule should be average with eight games against two divisions on the downslide. Both opposing divisions are loaded with fantasy football studs, but present three teams each that could finish sub-.500 records.