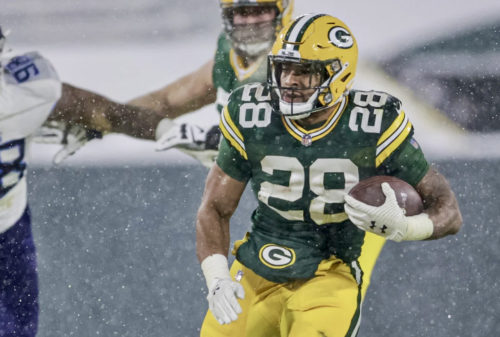 The 2020 fantasy football season is in the books. It was quite a ride. Regardless of whether or not a fantasy title was won, we have to be grateful for 16 full weeks of exciting NFL action. Stay in tune with the dynasty market this offseason and good luck in building those 2021 contenders. PlayerProfiler’s advanced stats and metrics will be here to help.

With Jamaal Williams out and Aaron Jones hindered by a hip issue, A.J. Dillon got his chance to show what he’s capable of. He saw a season high 58.1-percent Snap Share and rushed 21 times for 124 yards and two touchdowns in a Week 16 win against the Titans. He hauled in his lone target for five yards. Executing a successful Lambeau leap seemed to be the only real challenge for the rookie on his impressive day.

With Williams and Jones scheduled for free agency this offseason, Dillon becomes an intriguing dynasty asset moving towards the NFL playoffs and offseason. He gained a whopping 30.86 Lifetime Value points to vault 35 spots to RB26 on the dynasty rankings.

Before a two-score performance in Week 17, Jeff Wilson had two games this year with a Snap Share over 50-percent; Week 7 at New England (58.1-percent) and Week 17 at Arizona (71.2-percent). In these games, he handled 17 and 22 carries, producing 120 total yards (three TDs) and 204 total yards (one TD). The take-home message is that when the 49ers give Wilson a sizeable workload, he produces.

Jeff Wilson was successful as a rusher despite facing a light box (6-or-fewer defenders) on only 1 of 22 carries, the 5th-lowest rate (4.5%) in a game this season (min. 20 carries).

With 524 (No. 34 among qualified running backs) rushing yards and eight (No. 17) total touchdowns, Wilson was the team’s leading rusher entering Week 17. He also led the backfield with a 4.8 (No. 7) True Yards Per Carry average. Jerick McKinnon and Tevin Coleman are both pending free agents. This leaves the 25 -year-old RFA Wilson, and 29-year-old Raheem Mostert under contract. Wilson climbs 19 spots to a rank of RB46. He makes a decent stash for dynasty managers looking for RB depth.

Mike Evans exploded for 181 yards and two touchdowns on 10 catches against a porous Lions defense in Week 16. This was the second straight game where he produced over 100 receiving yards, a mark he hadn’t eclipsed since Week 4. Entering Week 17, he led all Bucs pass catchers with 67 (No. 25) receptions, 105 (No. 23) targets, 943 (No. 19) receiving yards and 13 (No. 4) touchdowns. Tampa’s all-time receiving leader set a new single-season high for touchdowns in Week 16 and ended 2020 with his seventh consecutive 1,000-yard season. With Chris Godwin set for unrestricted free agency in March, Evans gained 10.85 Lifetime Value points to move up to WR17.

Entering Week 17, Laviska Shenault had logged 52 (No. 46) receptions on 70 (No. 58) targets for 532 (No. 63) receiving yards and three (No. 57) touchdowns, the receiving yardage mark good for No. 8 in the 2020 wide receiver class. In Week 16 against the Bears, he had five catches for 48 yards and one score. For fantasy purposes, his 15.8 (No. 21) fantasy point total tied his season-high mark set in Week 13. This gave him seven games scoring double digit fantasy points before a two-score Week 17 showing.

Could Laviska Shenault be the next A.J. Brown?https://t.co/u7TVIgXd7P

Clinching the first overall pick in the 2021 NFL draft, a quarterback upgrade is on deck for the Jags. Shenault is poised to make an even greater impact in his second season and will surely be hyped as a sophomore breakout candidate. The 2020 second-rounder gained 14.57 Lifetime Value points to move up two spots to WR26 on PlayerProfiler’s dynasty rankings.

Josh Allen and the Bills made a statement versus their division rival New England Patriots last Monday night. He completed 27 of 36 pass attempts for 320 yards and four touchdowns in the Week 16 rout. He tacked on another 35 yards on the ground on four rush attempts. His strong performance resulted his first game of the year as the fantasy’s top QB of the week (he does have six other games in the top three at the position). This is fitting since his Week 16 performance crowned him the QB1 in fantasy football for 2020. His breakout campaign saw him rank No. 3 among qualified quarterbacks with 4,322 passing yards, a 79. 5 QBR and eight rushing touchdowns entering Week 17. Allen’s dynasty stock has been rising all season and climbs another spot to QB5.

With Clyde Edwards-Helaire shelved due to a leg and hip injury, veteran Le’Veon Bell was not the answer for the Kansas City Chiefs running game. He carried the ball seven times and earned three targets for 39 total yards in Week 16. Darrel Williams out-snapped Bell by a margin of 71.2-percent to 28.8-percent, saw six targets, and nearly doubled him in total yards.

Bell has been an underwhelming addition to the Chiefs roster, topping out at 64 yards (Week 15) and 53.2-percent of snaps (Week 13). He has scored just one touchdown. He slides eight spots to move down from RB33 to RB41.

Week 15 sensation Salvon Ahmed was given the early opportunity against the Raiders in Week 16, but failed to produce. It did not take long before teammate Myles Gaskin regained his workhorse role, registering 14 carries and five catches for 169 total yards, and two touchdowns. As at the University of Washington, Ahmed reverted to being Gaskin’s backup posting only six carries and one reception for three total yards. Ahmed drops from RB58 to RB65.

Right when we all start to trust Corey Davis as a lock in our fantasy lineups, he hands us another goose egg – his second of the season. After a solid run of production, Davis has been boom or bust over the last few weeks. Since Week 13, he has alternated top 10 WR performances with games of 4.4 and 0.0 fantasy points.

Entering Week 17, Davis had logged 60 (No. 30) receptions for a career-best 945 (No. 18) yards and five (No. 32) touchdowns in 13 games. His 14.0 Fantasy Points per Game slotted him in at WR25. Davis’ dynasty stack was at rock bottom at the start of the year, but his 2020 year has helped recover value. With contract uncertainty coming this offseason, the smart move may be to sell while the value is still relatively high. He falls six spots to WR42 in the most recent rankings update update.

Damiere Byrd has delivered some sporadic fantasy value this season, but in recent weeks has not connected with struggling quarterback Cam Newton. He saw three targets in Week 16, catching one on a screen pass for a seven-yard gain. He also dropped an easy touchdown pass that ricocheted off of his face mask.

Despite a healthy Snap Share, Byrd was held under 50 receiving yards in six straight games to end the season, not reaching the endzone since Week 11. He exceeded 100 receiving yards just once this season. With his one-year deal with the Patriots set to expire, the 28-year-old plummets 32 spots from WR98 to WR130 on the dynasty rankings.

Jordan Akins remains somewhat involved in the Texans offense, but is locked into a time share with Darren Fells, Pharaoh Brown and Kahale Warring. In Week 16, Akins played on just 34-percent of the snaps, a low since Week 9. He caught all four of his targets on the way to posting 39 receiving yards, a better than average outing for him. As part of this TE committee that has three of four members signed through 2021, the 28-year-old Akins has limited upside. He drops seven spots to TE38.