Without further ado, let’s what the Giants and Chiefs have in store for us this week.

Daniel Jones has quietly been a solid fantasy quarterback. In his six full games, he’s finished in the top 15 four times and in the top 10 twice. Jones is truly a boom-or-bust quarterback, with 14 (No. 8 among qualified quarterbacks) Money Throws and 17 ( No. 4) Danger Plays. His efficiency is below average, but his high attempt totals and rushing upside make up for it. Jones should be in starting lineups in 2QB/Superflex leagues against the league’s second-worst defense against quarterbacks.

Devontae Booker is doing what he can in Saquon Barkley‘s place. He’s been viable in fantasy thanks to his 9.0-percent Target Share in the last three games and three total touchdowns. He’s shown flashes of efficiency as a runner, posting a 55.7-percent (No. 2) Juke Rate.

Don’t expect much more than what you’ve gotten so far out of Booker tonight, but is worth the nod in the Flex spot.

Sterling Shepard is likely to return tonight after injuring his hamstring again in Week 6. Hamstrings are always tricky to deal with, but when Shepard has been in the lineup, he’s dominated. In his three full games, he’s averaged 19.8 Fantasy Points per Game. He also contributes a large amount of the teams total receiving production, displayed by his 39.6-percent (No. 7) Dominator Rating. Shepard is startable, but carries detrimental risk with his health issues.

Kadarius Toney is also set to return tonight. It appeared as if Toney was a bust to start the year, but here he is now with a 18.3-percent (No. 13) Hog Rate, 176 (No. 14) Yards After Catch, and a monster 189 receiving yard performance two weeks ago. We are now at the point where Toney is an auto-start in PPR leagues, especially against this porous Chiefs defense. 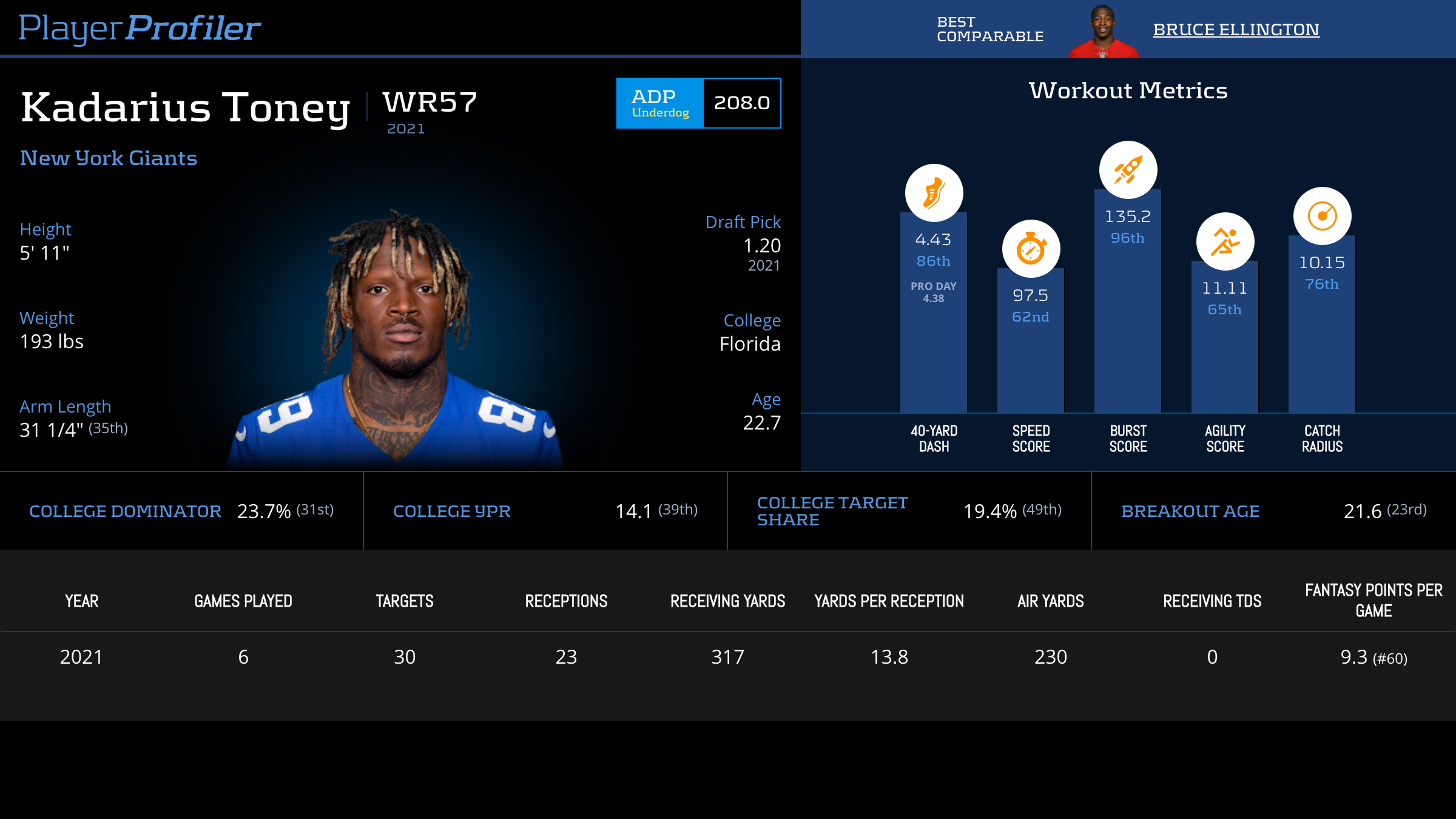 While John Ross filled in during his injury hiatus, Darius Slayton is the third option for the Giants. He’s earned a hefty amount of targets, averaging 7.33 targets per game in his three full games. These targets haven’t led to much production, but Slayton has big play ability and will be throwing at a high rate. Slayton gets the “emergency Flex” tag tonight.

Evan Engram has been disappointing this season, averaging 7 (No. 24) Fantasy Points per Game. He’s done nothing to show he belongs in starting lineups. Don’t start believing in him now.

Despite the recent offensive struggles, Patrick Mahomes has still been an elite fantasy option, averaging 24.4 (No. 6) Fantasy Points per Game. For Mahomes the interceptions may matter in real life, but they don’t matter in fantasy. He’s in no danger of having to leave your starting lineup.

Darrel Williams is in the perfect rebound spot. Two weeks ago, he racked up 89 total yards and two touchdowns on 24 touches. He’s also earned a 9.56-percent Target Share in his 2.5 games of being the starting back. He disappeared in the beatdown vs the Titans, but should stay in your lineups in what will be a positive Game Script matchup.

Tyreek Hill has had an up-and-down start to the season, but still checks in with 21.5 (No. 3) Fantasy Points per Game. His opportunity metrics, as usual, are off the charts. Those of which to note are his 756 (No. 7) Air Yards and his 19.5-percent (No. 7) Hog Rate. You’re starting Hill as usual tonight.

Unsurprisingly, Travis Kelce has been smashing this season. He’s in the top 10 in nearly every PlayerProfiler-featured Opportunity and Productivity metric, most impressively his 23.6-percent (No. 3) Target Share and 277 (No. 1) Yards After Catch. Kelce is going to explode yet again tonight.

Byron Pringle and Demarcus Robinson both see too little opportunity and produce too sparingly to be started. Mecole Hardman is the bottom of the barrel for this team. He’s quietly, and I mean very quietly, earned a 14.5-percent (No. 66) Target Share that’s turned into 259 (No. 55) receiving yards. He has big play ability, so you can start him if you’re in a tough spot, but he isn’t likely to contribute much to your rosters tonight.

As much as I think this is a rebound game for the Chiefs, the Giants are a tough out and a 10.5-point spread is too rich for my blood. I hate myself for it, but I’m taking the Giants to play scrappy enough to hang around and cover as underdogs. From a fantasy perspective, trust the Chiefs elite playmakers to go back to being just that. Consequently, trust the high octane matchup to create bountiful opportunities for Giants playmakers to score fantasy points

As for the total, it’s set at 52 total points. The public money is on the over, and that’s where mine is going to. Neither defense is particularly impressive and both offenses play at a fast pace. It’ll be a lower unit play for me, but I’m taking the over.

As an added bonus, I’ll note that I also like the over on Tyreek Hill‘s 81.5 receiving yards and Travis Kelce‘s 6.5 receptions. Hill has only hit that mark twice, but this is a “remember who we are” game for the Chiefs offense and Hill has a nice matchup vs James Bradberry. Kelce has hit 7 receptions in four of his seven games.