Welcome to the newest edition of Thursday Night Showdown. Similar to what the Salary Cap-tain brings you on Monday nights, I’ll be guiding you through the important aspects to watch in each Thursday night matchup.

Without further ado, let’s see what the Houston Texans and the Carolina Panthers have to offer us this week.

Christian McCaffrey will continue to prove why he was the auto 1.01 in non-superflex leagues. He’s averaging a whopping 162 scrimmage yards per game to start the season. His 50.6 (No. 1 among qualified running backs) Weighted Opportunities and 22.1-percent (No. 2) Target Share are otherworldly. Play CMC in all formats. My bold prediction is that CMC hits 100 yards through BOTH the ground and the air.

Robby Anderson and his 21.0 (No. 2) Average Target Distance are back in the truest form, a boom/bust vertical threat. With Sam Darnold throwing 7 (No. 17) Deep Balls thus far and Anderson’s projected matchup Vernon Hargreaves posting a dismal -23.3 Coverage Rating, the stars look to be aligning tonight. He’s a high upside flex play in standard leagues, but his $11,700 DraftKings price makes him a solid captain play.

Terrace Marshall has had a slow start to the season. The target shares of his teammates, ultra-positive Game Scripts, and slow Pace of Play will keep Marshall untrustable for the foreseeable future. He’s a wait-and-see player for now, even in DFS formats.

The LEGO-man, Sam Darnold, has been above average to start the season. This offense suits him. It’s methodical, supported by the run game, and it doesn’t put him in many tough situations. His current 99.8 (No. 13) True Passer Rating and 76.9-percent (No. 11) True Completion Percentage are on pace to be career highs.

Alas, he doesn’t put up enough fantasy points to break the bank. He’s been serviceable, but Christian McCaffrey‘s usage will prevent him from going nuclear.

Houston needs a miracle to win tonight. The Carolina Panthers haven’t trailed during a single snap so far this season. Carolina’s lethal defense leads the league in total yards allowed, points allowed, expected points contributed, and QB Pressures (per Pro Football Reference). Their defense is worth DFS consideration, but beware that they will likely be a chalk play. I’m going with a BOLD prediction of 3+ turnovers and a touchdown for the Panthers’ defense tonight.

The Texans shocked everyone with their performance with Tyrod Taylor at the helm. With Taylor now on IR, Davis Mills steps in to lead the offense. Carolina is a brutal draw for the rookie’s first start. Houston’s offensive line offered Taylor only a 68.9-percent (No. 28) Protection Rate. No one in their right mind is starting Davis Mills in any format. 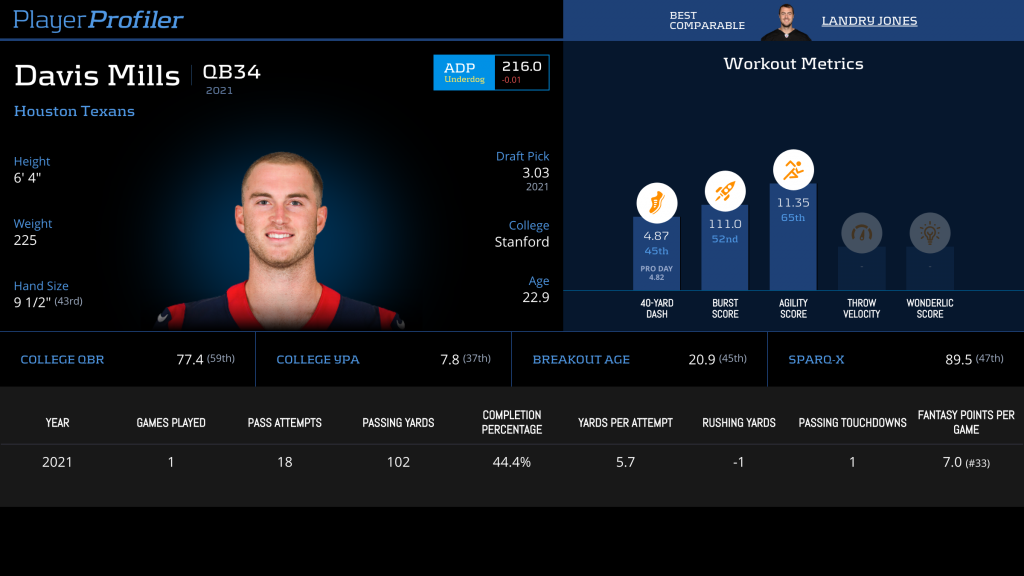 The only worthwhile play on this side is Brandin Cooks.

Cooks has crushed all opportunity and productivity metrics thus far. While he’s talented, his 53.8-percent (No. 1) Target Rate and 55.0-percent (No. 2) Air Yards Share primarily come from lack of competition. The Texans will be far behind all game, and consequently Cooks will see another 7+ targets, especially with the team also being sans Nico Collins. Davis Mills locked onto him last week, so don’t worry too much about the QB change.

Since they’ll be playing from behind for most of the game, don’t trust any Houston running backs. David Johnson is the only pass catching back worth consideration in DFS formats, but even then that is risky. He leads the backfield with 14 (No. 45) Routes Run, and is undoubtedly the lead pass-catching back.

Vegas has the total set at 43.5 points. Houston will struggle to score points tonight, and because of that I (barely) like the under. What I love on this slate is Carolina’s spread set at 7.5 points.

To finish up my trifecta of bold predictions, I’m calling for Houston to not score a touchdown tonight. That means I’m slamming the under of Houston’s team total of 16.5 points.

From a fantasy perspective, Carolina’s studs and Brandin Cooks are the only players I would trust.