Welcome to the first edition of Thursday Night Showdown (yes I missed Week 1, sue me). Similar to what the Salary Cap-tain brings you on Monday nights, I’ll be guiding you through the important aspects to watch in each Thursday night matchup.

Without further ado, let’s get right into the preview for two of the NFL’s premiere teams *check’s notes*…the Giants and the Football Team (queue sad game show noise).

Daniel Jones was anything but his nickname “Danny Dimes” on Sunday vs Denver. While Denver boasts a solid defense, Jones’s 6.6 (No. 29 among qualified quarterbacks) Accuracy Rating, 73.3-percent (No. 17) True Completion Percentage, and five (No. 1) Danger Plays leaves much room for improvement.

New York’s matchup is going from bad to worse in a short week, so it’s tough to expect much from anyone in this offense.

Darius Slayton and Sterling Shepard are facing the No. 7 and No. 23-ranked cornerbacks per PlayerProfiler’s cornerback rankings, and Washington finished No. 3 in expected points contributed by all defense in 2020, per ProFootballReference (not to mention their horrifying front-seven). 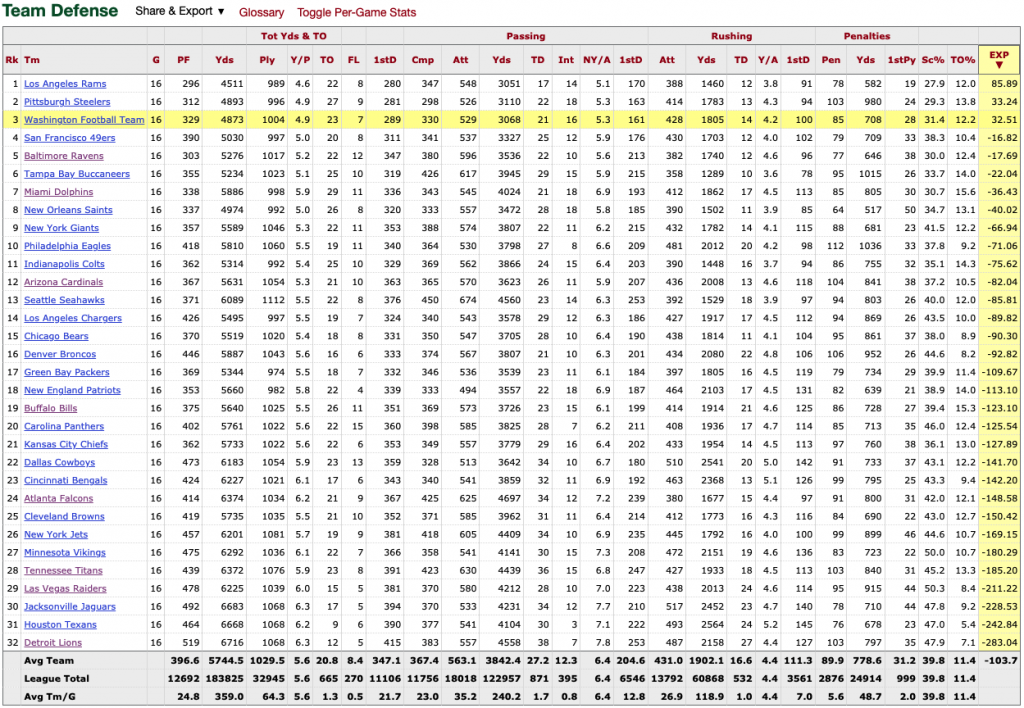 Expected Points Contributed By All Defense via ProFootball Reference

The return of Saquon Barkley forged predictions of a revamped offense, but his Week 1 opportunity can hardly be dubbed a “return.” His 47.5-percent (No. 30) Opportunity Share and 65-percent (No. 16) Snap Share left fantasy gamers hoping for much more. Guard Shane Lemieux is listed as “out” for Thursday, crippling an already porous run-blocking offensive line. Nevertheless, his talent and upside requires you to lock him in your starting lineup.

This presents quite the predicament in terms of who to start. Shepard, with his 9-123 performance in Week 1, appears to be the go-to target in this offense and should be heavily considered in DFS lineups, but is nothing more than a risky flex play in other formats.

Don’t be silly and sit Saquon Barkley. Start your stud, and be very cautious with anyone else.

Taylor Heinicke, the near-playoff hero, gets the nod for the Football Team in lieu of Ryan Fitzpatrick‘s recent IR designation. While that doesn’t tickle many ears, Heinicke’s miraculous playoff performance vs Tampa Bay and his Week 1 efficiency metrics show that he isn’t as bad as his name value would say he is.

Antonio Gibson looks to rebound from a mediocre Week 1 performance against a quietly stout Giants run defense, which held him to 20 and 30 rushing yards in their two meetings last season. He’ll still see a high volume of snaps and passing work, but with Washington clocking in at a 2.04 (No. 17) Pace of Play, he may not see a high carry total for the second straight week.

Scary Terry McLaurin matches up against James Bradberry (No. 16 per the cornerback rankings) this week. McLaurin hasn’t had much trouble vs Bradberry in the past, posting 14.4 (No. 22) and 24.5 (No. 10) fantasy points in their last two get-togethers. McLaurin’s monstrous 41.2-percent (No. 3) Air Yards Share and 25.4-percent (No. 11) Target Share last season reminds us that he’ll be heavily targeted and trustable in fantasy lineups every week.

Dyami Brown has an enticing matchup vs No. 51-ranked Adoree’ Jackson. As the de facto WR2 in Washington, we know the breakout game is coming soon. He’s not startable in non-DFS formats yet, but his $1,400 DK salary is too cheap to pass up.

While Brown is the WR2, Logan Thomas is the secondary target in Washington. He posted a mouth watering 14.3-percent (No. 19) Target Share, 20.6-percent (No. 8) Air Yards Share, and 28 (No. 3) Slot Snaps last week, while the Giants gave up a combined 11-78-1 to Noah Fant and Albert Okwuegbunam. Expect plenty of usage for Thomas tonight, and don’t even think about benching him.

I’m very confident in Washington covering the 3.5-point spread in this matchup. The Football Team has a much better roster on both ends of the ball.

This game is more murky from a fantasy perspective. With Washington posting a bottom half Pace of Play and likely playing with a lead, the upside on stars looks to be limited. However, it is still important to trust your studs and attack the favorable matchups unless a much better option is on your team’s table.

The 40.5-point total is extremely low, and even then I’m not super confident in the over. However, given my prediction of Washington leading early and forcing the Giants to ramp up the offense to force points on the board, I think the over barely hits (life’s too short to bet the under). This heavily relies on New York surpassing its 16.8 Implied Vegas Points.