In case you missed it, PlayerProfiler has debuted a few shiny new DFS tools. On top of our usual GPP Lineup Genius, we’ve added a Cash Game Optimizer and an Underdog Pick Generator. The final two additions to the DFS tools roster, and the focus of this weekly piece, are the UPSIDE FINDER and VALUE FINDER tools. The VALUE FINDER generates a Value Rating based on a player’s salary and projected point total on either DraftKings or FanDuel. The UPSIDE FINDER generates an Upside Rating based on a player’s salary, projected point total, AND their Upside Projection on either DraftKings or FanDuel.

Each week, you’re cordially invited to join ya boy Double R, Ray Ray Marz (editors note: your new hero, your party host, and your Editor in Chief here at Underworld Enterprises) as I take you through some of the best Week 2 DFS plays highlighted by the UPSIDE FINDER and the VALUE FINDER.

With a salary of $5,800 and a projected 23.5 DK point total, Danny Konami represents the VALUE FINDER’s favorite play this week. Cheap QBs with rushing upside projected will usually rank near the top of this list. We even have GPP LINEUPS built around two of them in Daniel Jones and Justin Fields. The third is Jacoby Brissett, set to start against a Raiders team that we still need to see more from defensively before shying away from a matchup that should see Will Fuller make his long-awaited Dolphins debut. Of these three, Jones faces the worst defense and has shown the most rushing upside to this point, a large part of the reasons he currently ranks as the QB5 (!) in Fantasy Points per Game. Now he draws Atlanta’s “defense.”

YOU know what to do (editors note: this is MY schtick, Larky! Don’t think I don’t see you popping it at the end of some tweets ;>). 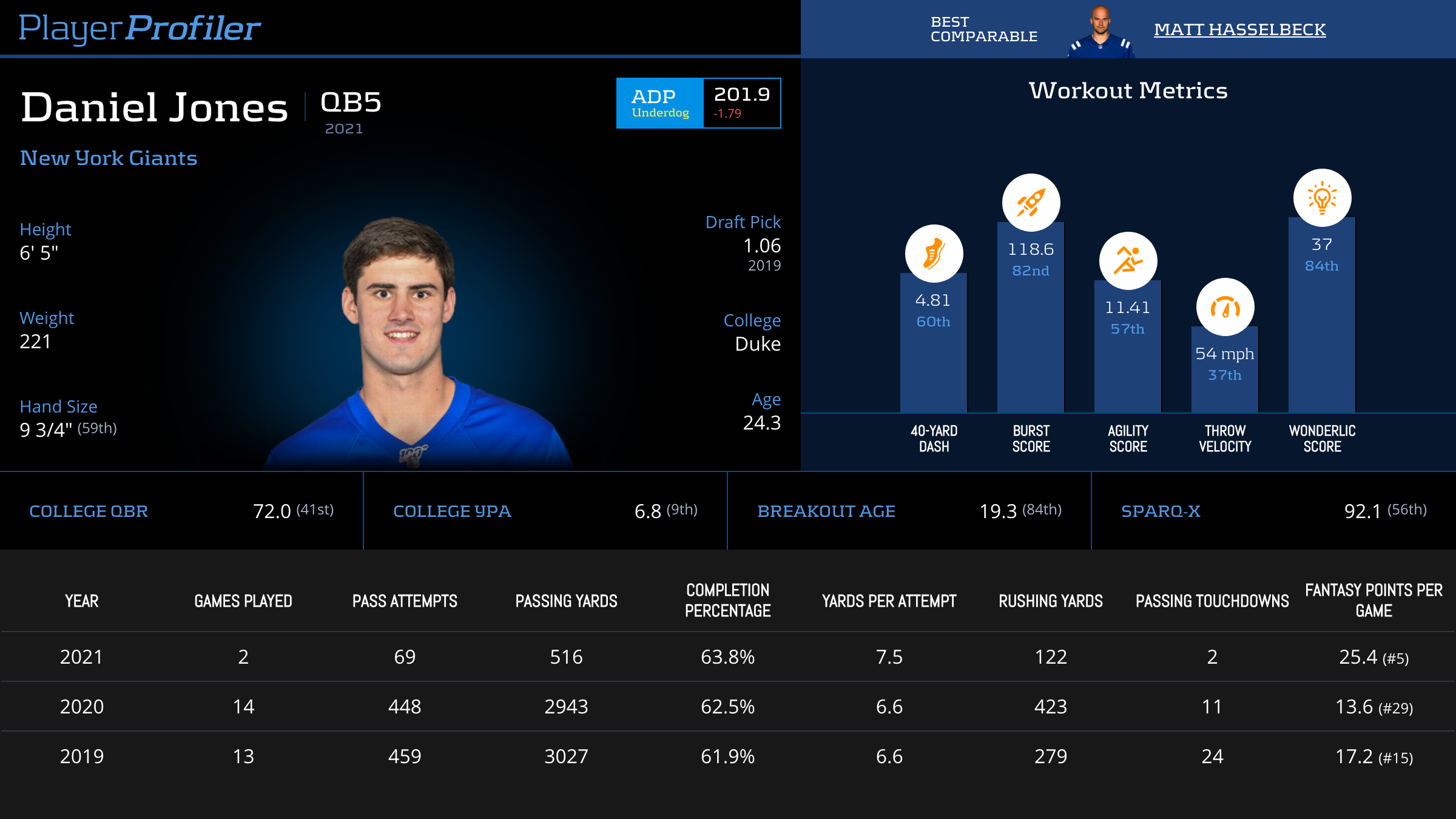 With 13 of the top 16 players on this week’s VALUE FINDER list being QBs, it’s fairly obvious that you want to play as many of these matchups as possible. Of the non-QBs, Mike Davis represents a tremendous value against the Giants, especially if the game shoots out (editors note: they’re retiring Eli Manning‘s jersey at halftime, and against the team he made his first career start against at home. DO NOT underestimate the chances of the Giants offense overdelivering for that reason). Anthony Schwartz being the fourth-highest ranked non-QB despite scoring ZERO fantasy points last week also stands out.

Of the other QB plays near the top of this week’s list, THE biggest value is 100-percent Trevor Lawrence, whose $5,500 salary, matchup against Arizona, and 19.9 projected DraftKings points net him the a 3.62 VALUE RATING, the No. 6 mark on the week. He has the game environment fit for a professional coming out party and fantasy point-scoring bonanza. And I have to think he’s going to try and take his Clemson Tigers being upset by NC State this week out on an Arizona defense that let up 33 points to Minnesota last week.

Odell Beckham is back, but Anthony Schwartz is also back. Back at the top of the UPSIDE FINDER list, only this week he takes THE top spot. Despite last week’s goose egg, he should still be on the DFS radar as a punt play to save salary. His routes may have dropped last week, but his snaps increased. If these two numbers can meet in the middle, and Schwartz can haul in a deep bomb for at least one score, he may be on pace to nail his UPSIDE PROJECTION of 18.06 DraftKings points (at a $3,200 salary). He did have 126 Air Yards (No. 10 among WRs) in Week 1. 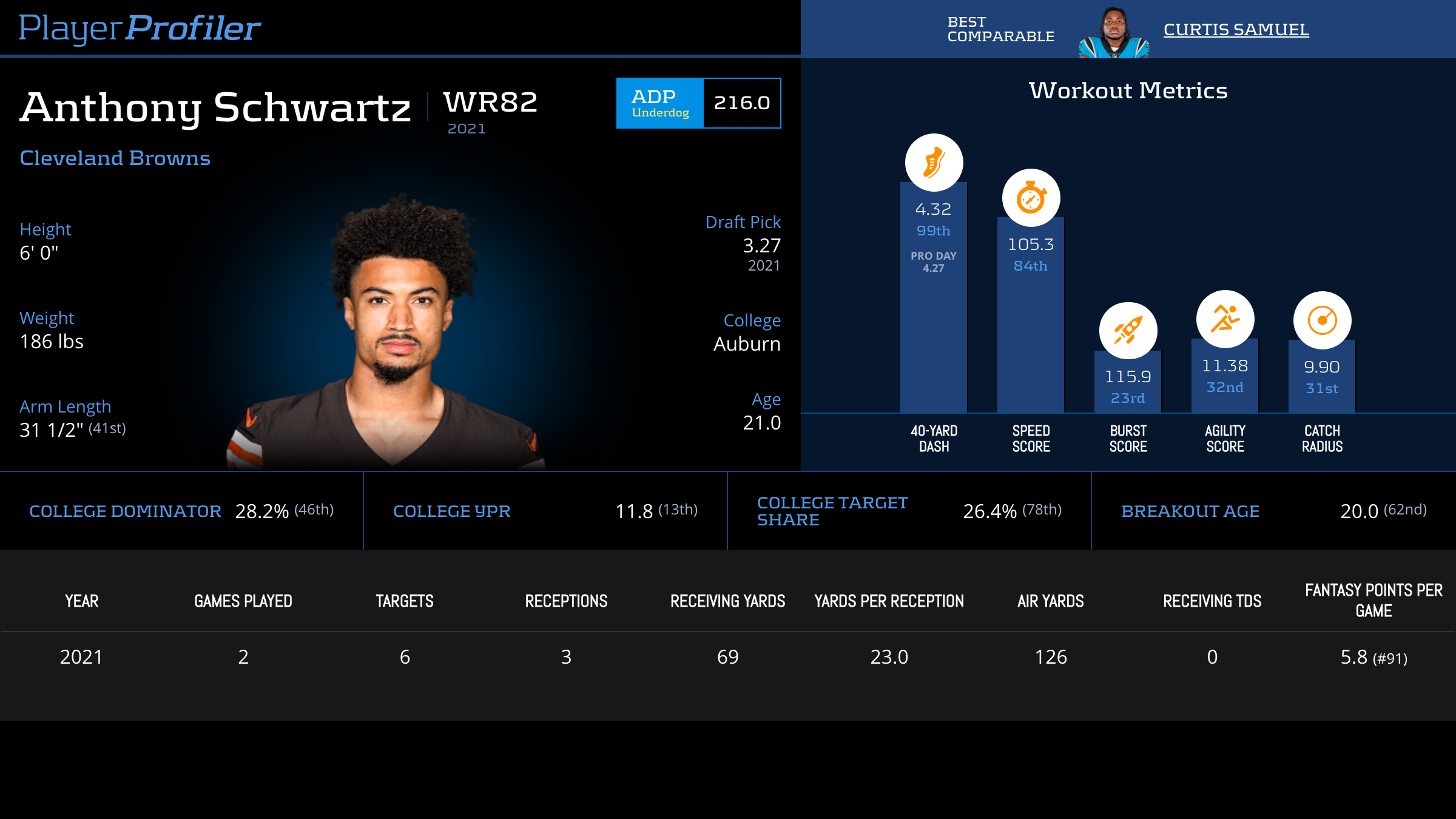 In a given week, QBs are likely to have the highest UPSIDE PROJECTIONS. Kyler Murray sits atop this week’s list with an UPSIDE PRJECTION of 34.29 DraftKings points. Though his salary being all the way up at $8,300 plays a large part in keeping his UPSIDE RATING outside the top 70 (!) players.

This week, the UPSIDE RATING feature again LOVES cheap, underrated options that project to come in with super low roster percentages. Specifically, the QBs we mentioned in the VALUE FINDER section in Justin Fields, Daniel Jones, and Jacoby Brissett. All have matchups and players around them that can see them break the slate relative to expectations.

The other players who break an UPSIDE RATING of 5.0 include many players we love at UNDERWORLD ENTERPRISES in Laviska Shenault, Leonard Fournette, and Marvin Jones. But one name stands out. A QB who is trending towards being among the least rostered in all of DFS. This through no fault of his own, rather the fact that the matchup doesn’t project to shoot out. And though picking potential weapons to stack with and run-backs to use would be tricky, it’s crazy to think that our computers didn’t pick up on a computer-like QB in Mac Jones. Don’t brush off the possibility that Bill Belichick will want to unleash Jones on New Orleans in advance of next week’s meeting with Tom Brady and the Bucs.