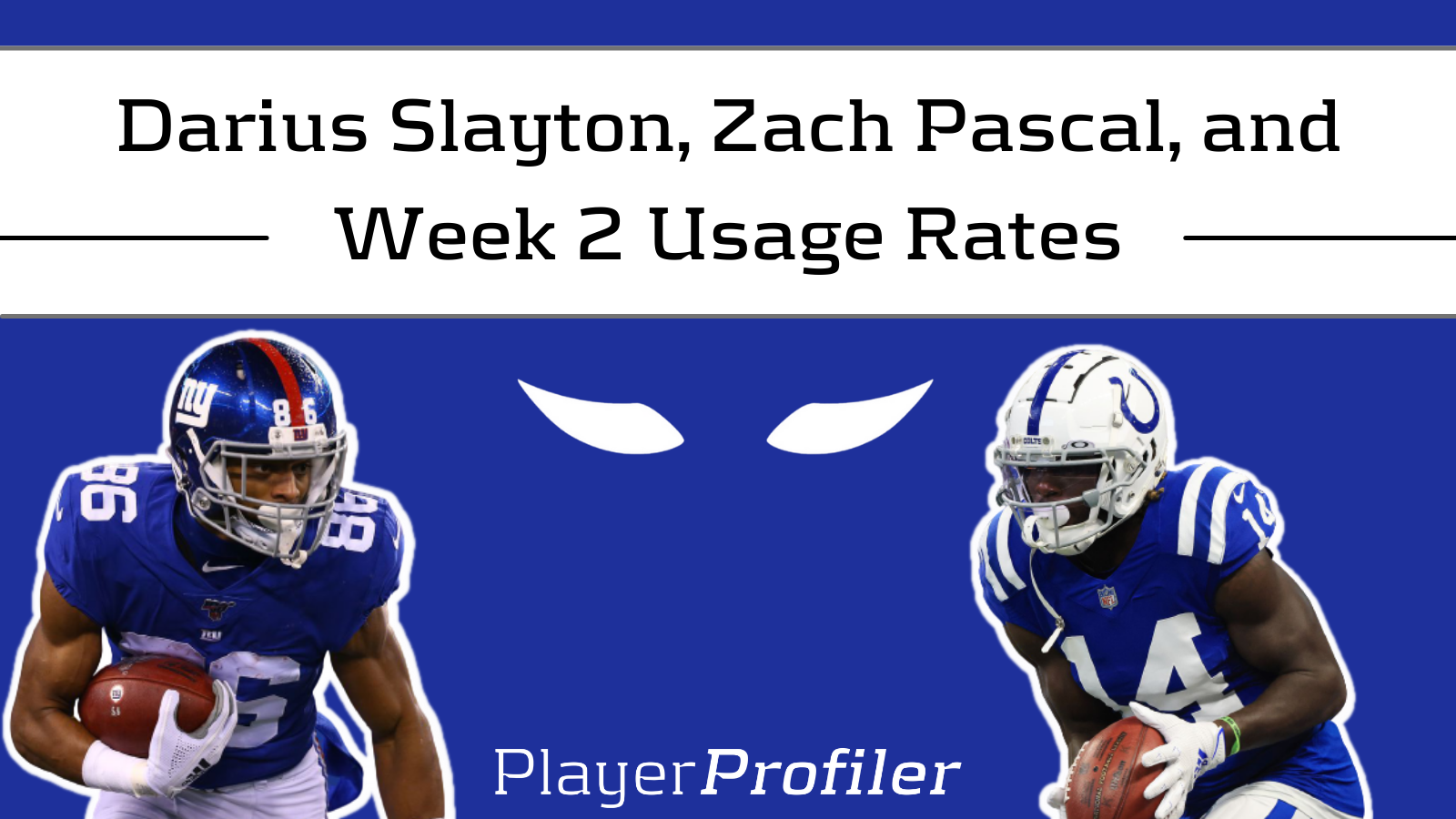 If you’re not familiar with this weekly piece, click here.

While this is not a start/sit or sell high/buy low piece, we know the biggest question you is who to Flex. So, we provide you a handful of players to target specifically for the week at the position. This week, Darius Slayton headlines our fantasy football recommendations because stats don’t play favorites. If you’re looking for more players, watch our weekly Undercoverd Opps show.

Darius Slayton‘s totaled 13 targets in his past two games, including six-plus in each. Now, Kenny Golladay is a game-time decision for the Giants-Falcons game. Either way, the Falcons defense allowed eight[!] passing touchdowns in its first two games to start the season. While the implied point total sits at a lowly 47.5 points, the Falcons defense rank fourth-worst in Pass DVOA. The Falcons offense rank 11th-fastest in situation-neutral pace of play as well, which could lead to the Giants increasing tempo if the Falcons jump out to an early lead. Slayton is just ahead of Golladay in targets in the first two games, although Sterling Shephard paces both. With a 29.3% Air Yards share and an average target distance of 15 yards, Slayton’s an all-or-nothing Flex play. He can finish with 3-65 or 3-65-2.

Zach Pascal‘s totaled 11 targets and three touchdowns in his past two games, including five-plus in each. Newly-acquired QB Carson Wentz is active as well. Pascal faces off against the Titans this week – a pass defense that’s allowed six touchdowns in its first two games. The damage includes 36 receptions and 572 yards. The Titans defense rank 10th-worst in pass DVOA as well, while the Colts defense rank ninth-worst. Basically, this matchup has shootout potential based on both defenses not being able to contain the pass – a resume for points. That’s a reason to take the over on the implied point total of 47.5 here.

The downside is that the Colts’ offense rank the slowest in situation-neutral pace of play, while the Titans rank seventh-slowest. That could lead to an unusually low total of plays for the game. The Colts average just 37 team pass plays per game as well. Pascal, though, totals a 90.4-percent Snap Share, a 74.8-percent slot rate, and a 100-percent Route Participation mark. But he also totals a lowly 15.9-percent Target Share and a 14.9-percent Target Rate.

Sammy Watkins is among all Ravens pass-catchers with 15 targets the past two games, including seven-plus in each. Just one shy of the team-lead of 16 with Marquise Brown. On a Ravens team averaging just 28 team pass plays per game, Watkins’ route participation clip sits at 100%. His target share is an impressive 29.4-percent, while his Target Rate sits at a 25.4-percent clip. Watkins’ Air Yards Share is a whopping 33.5-percent as well.

The downside is the Ravens are 7.5-point road favorites over the Lions, meaning the Ravens could go up big early and Watkins is game scripted out of the game. But the implied point total is one of seven matchups to eclipse 50 at 50.5. The Lions defense rank eighth-worst in pass DVOA as well. While Brown is most likely not openly available on waivers, Watkins is an intriguing option if you buy this more than the early-season turned-up version of Watkins.

While we shouldn’t rely on rookie QBs to support no more than one pass-catcher in fantasy, Mooney should benefit from the efficiency boost at the game’s most important decision with Justin Fields in the lineup. That and Mooney’s 15 targets – seven-plus in each outing – the past two games has his stocks up heading into this week. The Bears offense only averages 31.5 team pass plays per game. But Mooney totals a 100-percent Route Participation clip, a 23.8-percent Target Share, and a 35.5-percent Air Yards Share. His Target Rate sits at 23.4-percent as well.

The downside is the Bears-Browns implied point total of 44 and that the Bears and Browns are eighth- and fourth-slowest in situation-neutral pace of play. That said, the Bears are 7.5 dogs, so passing volume should be in the cards for the Bears’ offense. The Bears defense rank sixth-worst in pass DVOA as well, so that may portend to increased passing volume as well. It’s not the best spot for Fields to debut, but it can be worse. Mooney’s 6-66 stat line from last week isn’t a bad outcome this week – if a touchdown’s attached to the end of it. The Browns defense allowed just two in its first two outings of the season, though.

With Sterling Shephard pacing all New York Giants pass-catchers with 19 targets the past two games, my thinking is fellow middle-of-the-field target Evan Engram potentially gets funneled over some of those targets. Engram is a play for those streaming TE. That said, he’s only a play for TE streamers who literally punted the position until the double-digit rounds of drafts. Again, the Falcons defense allowed eight[!]  passing touchdowns in their past two outings, including three to the TE position.

The downside is Engram is eased back into action in his return week or that the middle-of-the-field theory is just wrong.

This may be the last week to add Cordarrelle Patterson off waivers. For that reason, he’s worth a speculative add at worst. From a macro point of view, betting against Mike Davis this season was an easy bet. It’s twofold: Davis could play horrible and cede playing time to his backups like Todd Gurley last season. Or Davis could play league average, but a backup plays exceptional. While Davis’ usage is fantastic, we are seeing both bear cases against Davis pan out.

The downside is that the Falcons coaching staff likes limiting Patterson’s touches to where they are now through two games. Week 1, Patterson totaled nine touches, then he jumped to 12 last week. The bull case is that Patterson continues to see his touches rise, while the bear case is that he’s simply a complimentary piece. Patterson totals just a 34.6-percent Snap Share, a 37-percent Opportunity Share, and he’s created 21 Weighted Opportunities. That said, he totals the fifth-highest [1.48] fantasy points per opportunity clip. Juxtaposing Patterson’s number with Davis, the latter totals a 66.9-percent Snap Share, a whopping 62.7-percent Opportunity Share, and he’s created 34.8 Weighted Opportunities. Unlike Patterson, though, Davis is not efficient – totaling a 0.64 (No. 41) Fantasy Points Per Opportunity clip. Heads gotta roll. There truly is no downside to Patterson, as he’s a speculative add. But there are ranges of outcomes where he doesn’t unlock his hidden potential.

Sharp fantasy gamers drafted Justin Fields and Trey Lance in the double-digit rounds of their drafts. That said, Fields is still available in just over 45-percent of ESPN leagues. QB streamers need to apply within. With his rushing upside providing a strong floor, Fields is a high-floor, high-ceiling commodity. The Browns’ defense allowed five passing touchdowns in its first two outings of the season. After this week, Fields has juicy matchups against the Lions and Raiders, respectively.

The downside is Fields is not NFL-ready and does not do enough as a passer to unlock his league-winning ceiling outcome.