Without further ado, let’s see what the New England Patriots and the Atlanta Falcons have in store for us.

Michael McCorkle Jones (Some call him Mac Jones) has been the best rookie quarterback of his class. He’s as accurate as advertised, boasting a 8.0 (No. 3 among qualified quarterbacks) Accuracy Rating and 17 (No. 10) Money Throws. There have been rookie moments, but he is getting better every week. The game is slowing down, and Jones is beginning to better connect with his deep threats down the field. He is going to shred the laughable Falcons defense, who allow 21.5 Fantasy Points per Game to quarterbacks.

Damien Harris is off of the injury report and should go straight back into your lineups. The Rhamondre Stevenson show was nice for one week, but let’s not get ahead of ourselves. Harris is leading the backfield whenever he’s playing, especially when it comes to the red zone. He totals 29 (No. 8) Red Zone Touches, and 7 (No. 7) Total Touchdowns.

The Patriots have a knack for playing with a lead. When they do, they give the ball to Harris.

Jakobi Meyers finally scored a touchdown, and the masses promptly celebrated. He’s seen 76 (No. 15) targets, but has only turned that into 11.0 (No. 45) fantasy points. His -30.6-percent (No. 102) Target Premium shows that the problem is fantasy-relevant targets. The highest producing receiver has been Kendrick Bourne. Forget Nelson Agholor. Bourne has been doing it all, highlighted by a +24.3 (No. 2) Production Premium and 2.63 (No. 2) Fantasy Points per Target. There are better streaming options out there, but both Meyers and Bourne offer low floor/high ceiling flex plays. 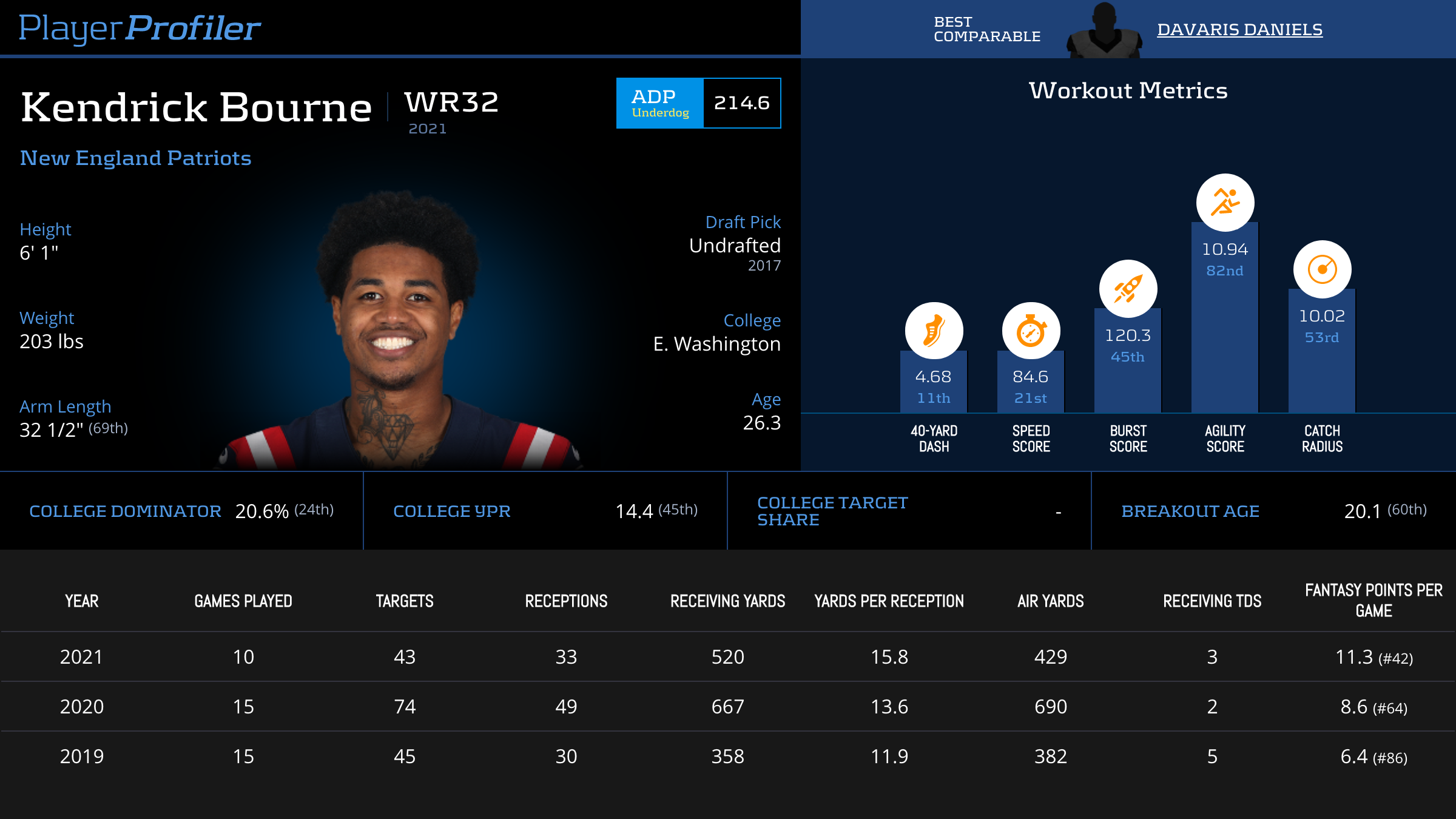 Hunter Henry has been the cemented receiving tight end, and is having a monster stretch. He’s scored a touchdown in six of the last seven games. Henry has become a viable weekly streaming option.

Matt Ryan has been the definition of average this season. Call him Matty Lukewarm. He checks in with 16.7 (No. 19) Fantasy Points per Game, a 7.7 (No. 12) Accuracy Rating, and a 88.1 (No. 18) True Passer Rating. He’s been mostly unreliable in fantasy, and finds himself against an elite pass defense without Cordarrelle Patterson and Calvin Ridley. Yikes.

Wayne Gallman is the next man up in the Atlanta backfield. Yes, I know Mike Davis isn’t hurt. It’s clear by now that Davis is  taking a backseat from here on out. Gallman thoroughly surpassed expectation in relief of Saquon Barkley last season, dropping six straight top-18 performances. He managed to earn 8.6 (No. 34) fantasy points and 76 total yards on a 43.8-percent Snap Share.

The Patriots are beatable through the ground, and Gallman is a weekly play with Patterson sidelined. 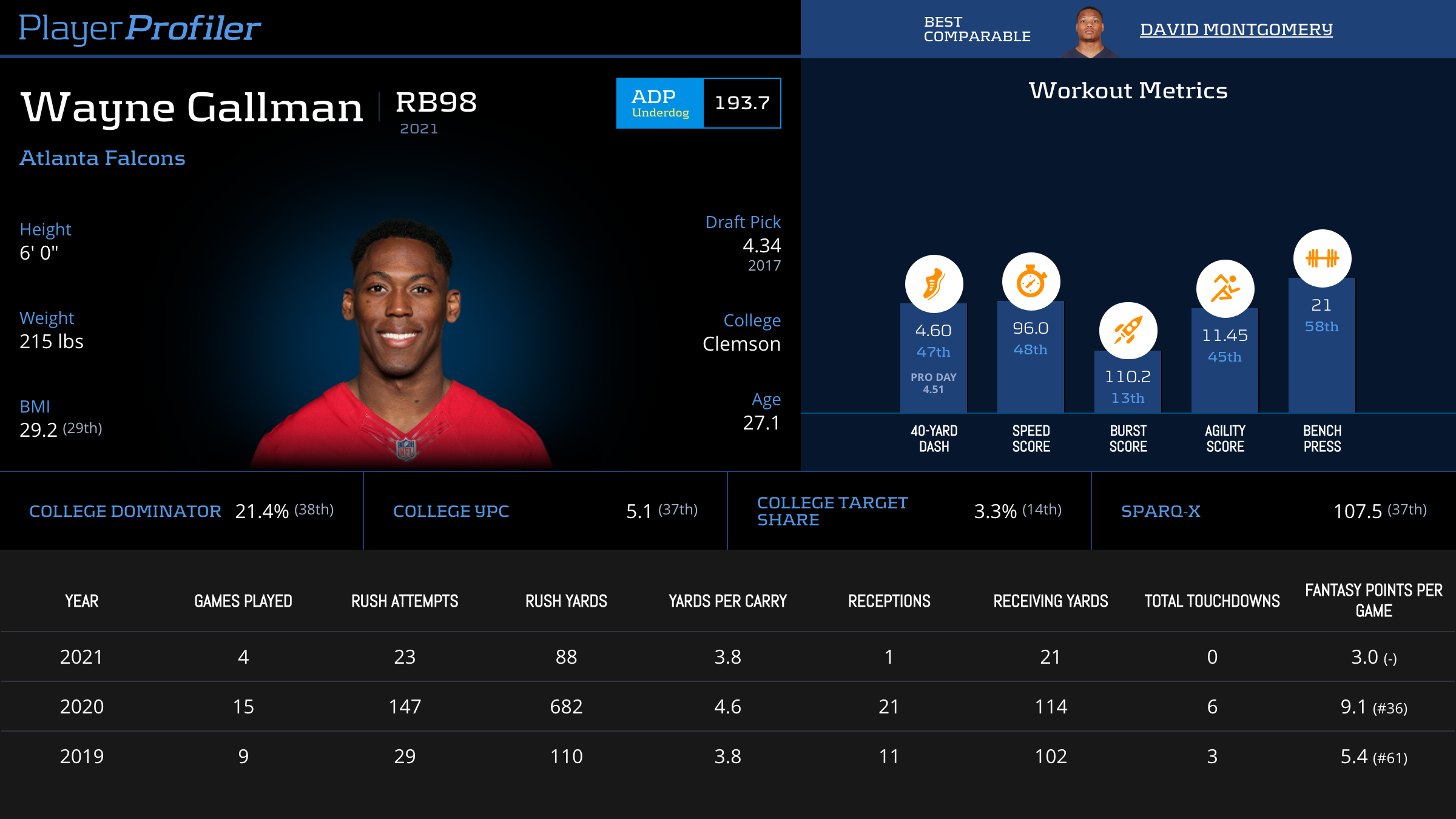 The last of the fantasy-relevant Falcons is rookie sensation Kyle Pitts. As advertised, he is a special athlete. The nature of the Falcons offense is why his 11.8 (No. 7) Fantasy Points per Game isn’t higher. He certainly sees enough opportunity to be a top-three tight end, earning a 20.1-percent (No. 6) Target Share, 29.5-percent (No. 1) Air Yards Share, and 15.9-percent (No. 1) Hog Rate. The Falcons will keep finding ways to get Pitts the ball, and you should keep finding ways to get him in your lineups.

Neither Russell Gage nor Olamide Zaccheaus are the answer to your fantasy teams problems. They both have weekly 20 fantasy point upside, but a near-zero floor. Both of their Target Shares are inconsistent and undesirable. Now they have to face J.C. Jackson and the New England secondary on a short week. Stay far away from both of these Falcons receivers this week.

The Patriots are a good football team, and they’re on a roll. The Falcons, well, have seen better days. The Vegas line is set at 7 points in favor of the Patriots, and I expect the Patriots to cover. The Falcons are struggling on both sides of the ball, and are missing important playmakers. The Mac Jones debut tour is set to rack up another win.

The point total is set at 47 points. Thursday night games have been a friend of the under, but that’s not what I’m riding tonight. The Mac Attatck is going to roll into Atlanta and rack up points. This is going to be a rout, but Atlanta will still manage to get points on the board. I’m taking the over tonight.