2022 free agency has seen some of the wildest offseason moves in some time. Star receivers on the move, quarterbacks in new places, and key signings and trades all over the place have changed the look of the NFL. Underneath the fluff of signings and flurry of trades, however, are some under-the-radar signings that can impact the fantasy football landscape.

The return of Jameis Winston to the Saints brings several different fantasy implications, not only for him, but for the team’s skill players. As a starter for New Orleans last season, Winston averaged 17.2 fantasy points per game with 14 passing touchdowns to just 3 interceptions in seven games. He also tacked on 166 rushing yards, showing he has the rushing potential to be impactful in fantasy. Winston had two top-5 weekly fantasy finishes in that time. However, he had four games under 15 fantasy points, showing he was a very volatile option on a Saints team with limited receiving options. 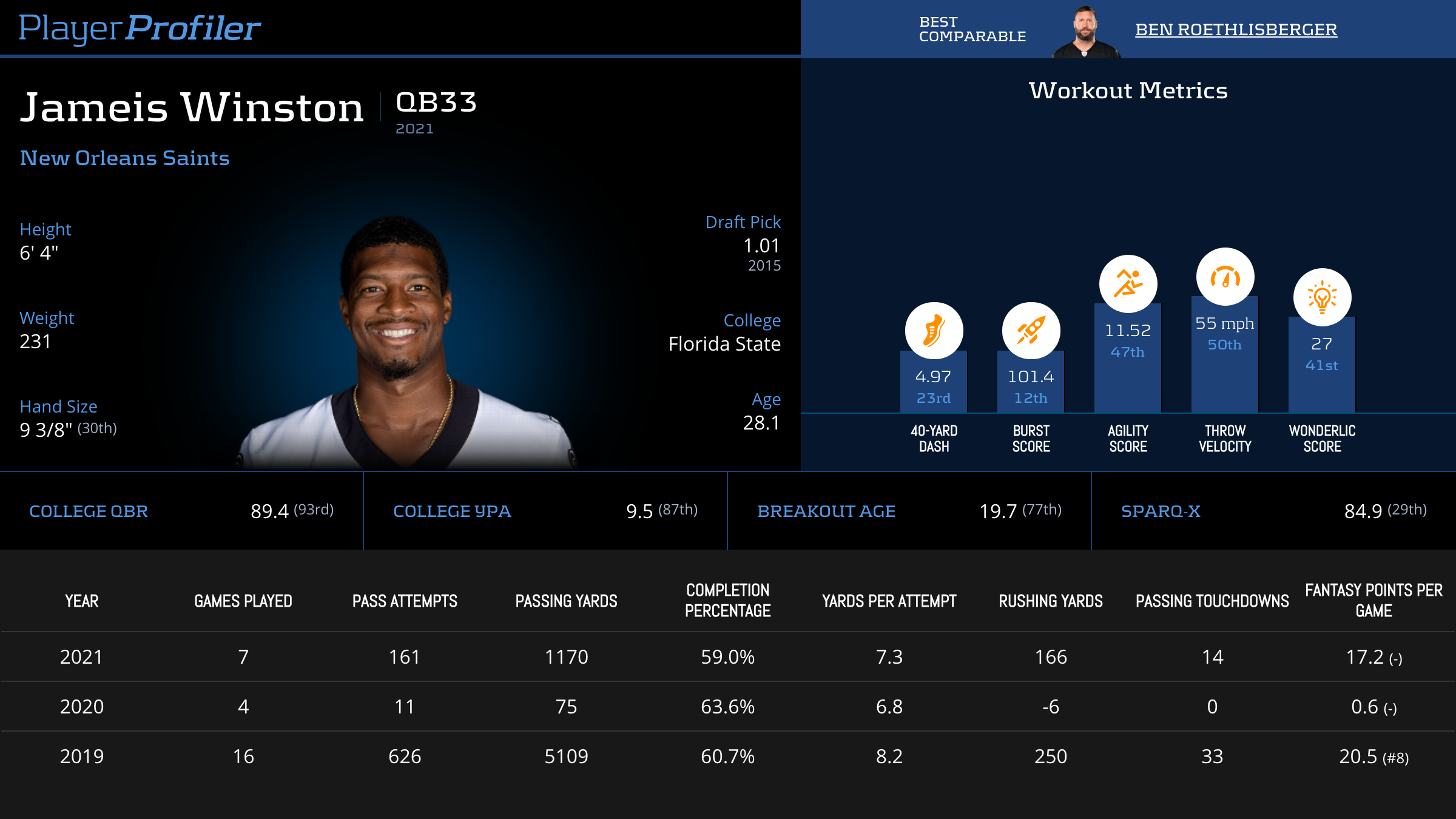 With Winston starting, Alvin Kamara averaged more fantasy points, targets, and receptions per game last season. Michael Thomas did not play with Winston, but he looks to perform better under Winston and his higher passing pedigree, as opposed to Taysom Hill. No other Saints players invoke confidence for fantasy purposes, but Winston’s return boosts the primary duo of Kamara and Thomas, compared to the alternative of Hill.

Ultimately, Winston gets his best receiver to throw to as a Saint in Thomas, a boost from the mediocre supporting cast behind him. He now has a true No. 1 receiver with sure hands to feed the ball to. Both Thomas and Kamara get boosts from Winston’s return, while Winston himself profiles as a solid redraft fantasy option with top-12 QB potential.

After releasing Cole Beasley, the Buffalo Bills went out and signed Jamison Crowder. Crowder (whose Best Comparable is Beasley) has spent the majority of his career as a slot receiver. Last season in twelve games, he took 334 (No. 17 among qualified wide receivers) Slot Snaps at a 66.8-percent Slot Rate. In Buffalo last season, Beasley had an 82.1-percent Slot Rate with Isaiah McKenzie filling in the slot as well. With Beasley out, Crowder’s role will almost certainly be as Josh Allen‘s slot receiver, a position where Beasley saw over 100 targets each of the last three seasons. 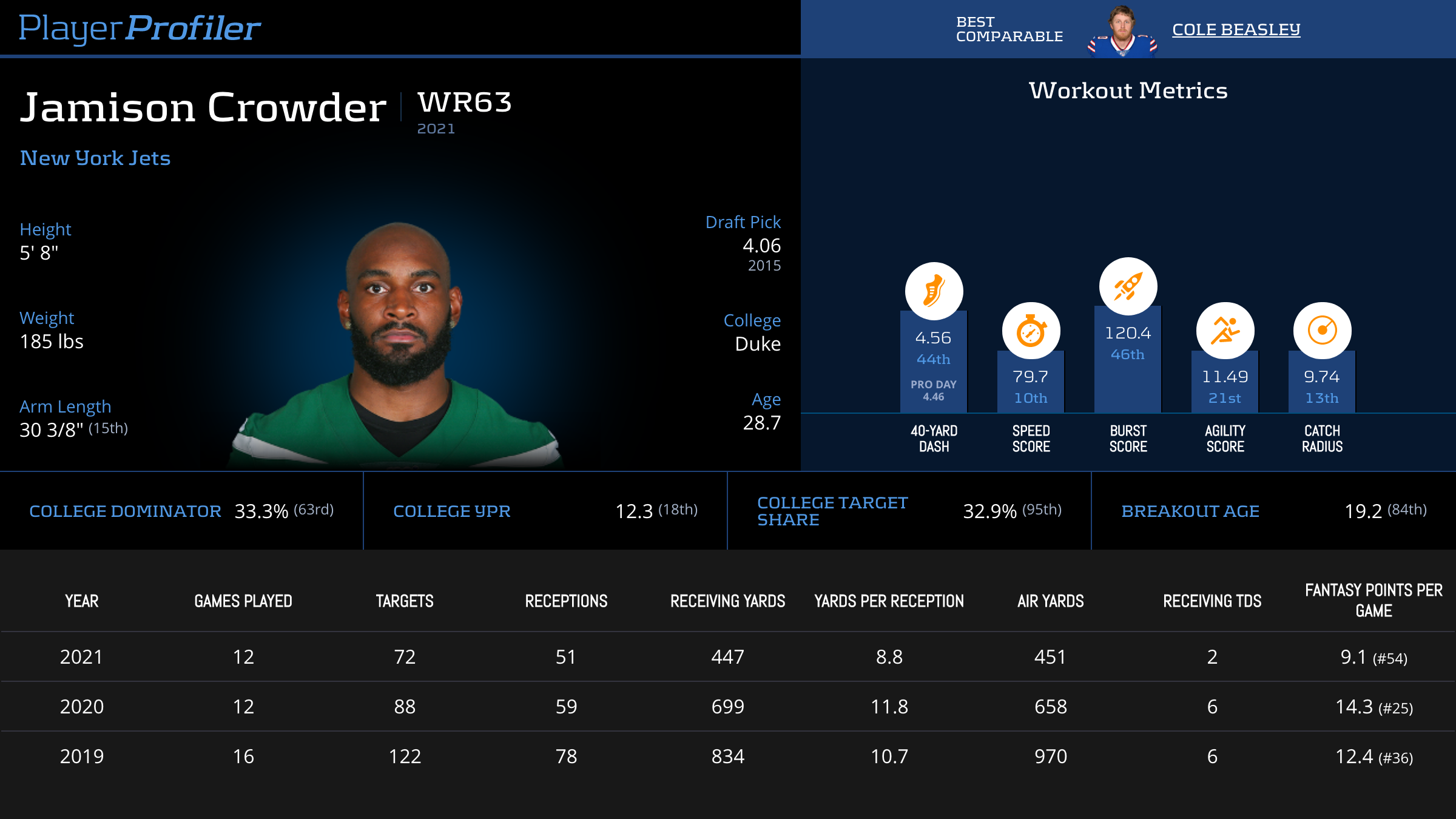 As a Jet last season, Crowder averaged 9.1 (No. 54) fantasy points per game on a 16.9-percent (No. 55) Target Share. These numbers seem underwhelming, but the Jets’ QB situation was hardly stable during Crowder’s time there. In both 2019 and 2020, Crowder earned Target Shares over 24-percent, averaging double-digit fantasy points both years. In Buffalo, Crowder will see the approximate 20-percent Target Share that Beasley saw and will be in the fantasy relevant mix as a result.

The addition of Crowder will impact lower depth chart receivers like McKenzie but should continue to keep Allen as one of the top fantasy QBs. He will compete to be the second-most fantasy relevant receiver in Buffalo behind Stefon Diggs and should be eyed in the later rounds of redraft leagues. Crowder will be a volume-based late-round flier with WR3 weekly potential in 2022.

Jamison Crowder: 140 slot receptions since 2019, 9th most among all Wide Receivers🔥 pic.twitter.com/UMAFOOony0

The Lions added D.J. Chark to an underwhelming receiving corps for Jared Goff, and his addition does have an impact on fantasy football. Chark joins a team with Amon-Ra St. Brown, T.J. Hockenson, and D’Andre Swift as its top receivers, so there is volume to be had. He will take the role of Goff’s primary outside receiver, a position that was in flux for Detroit last season. Kalif Raymond, Josh Reynolds, and Quintez Cephus all took turns on the outside last season, and while you weren’t drafting any of them before Chark, none of them are fantasy relevant now. St. Brown plays out of the slot, so his usage will not be affected to a great extent. 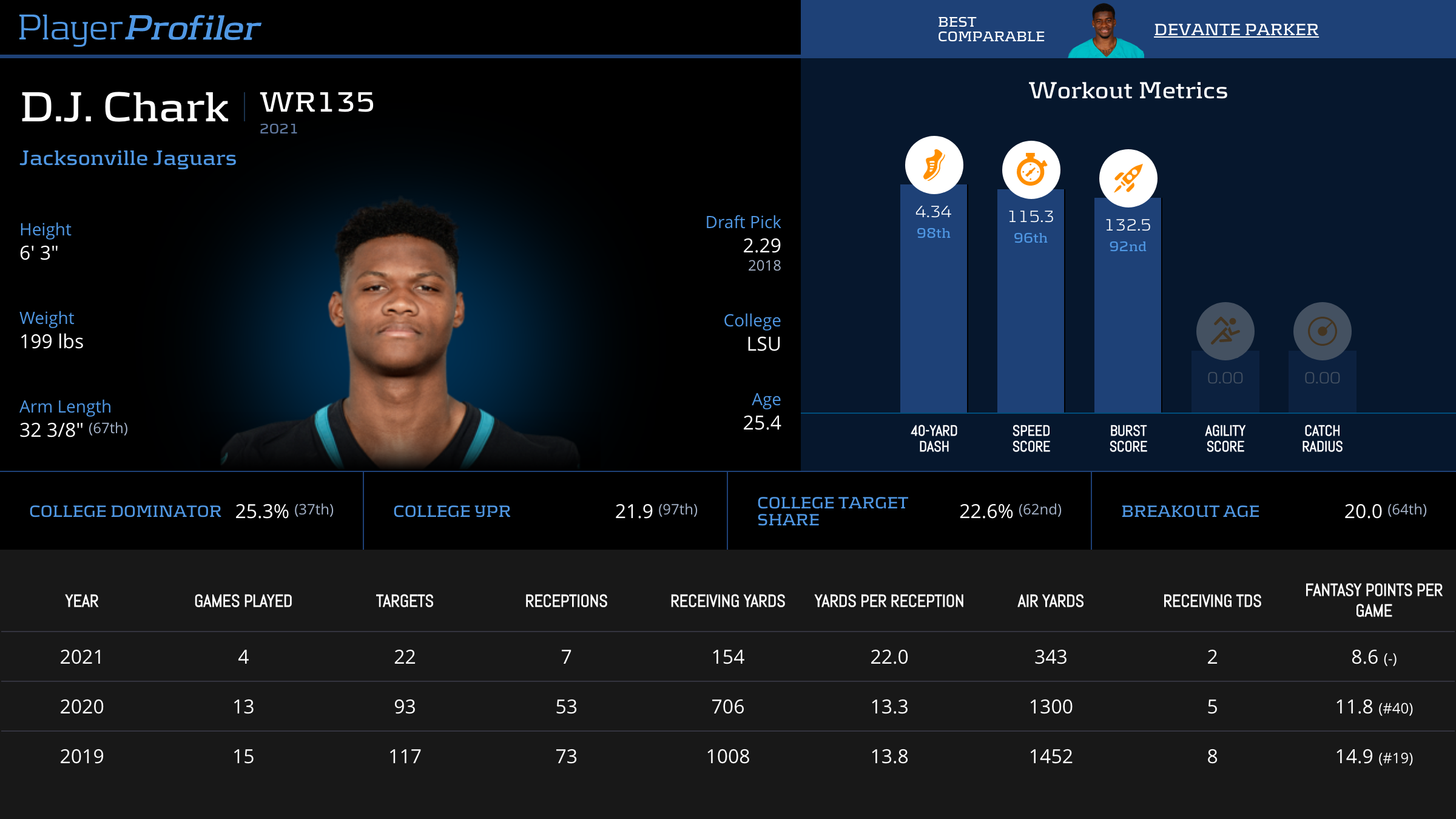 Chark was hurt most of last season but was often a deep threat for Jacksonville. He ranked top-15 among qualifying WRs for total deep targets and team Air Yards Share in both 2019 and 2020. Chark also adds speed to Detroit’s receiving corps, with a 115.3 (96th-percentile) Speed Score and 132.5 (93rd-percentile) Burst Score. Raymond was a speedy slant receiver while Reynolds was more of a deep target for Goff last season. Chark will bring stability to those aspects of the game while stretching the field. Detroit can spread its offense past the short looks of Hockenson and Swift.

With nearly no competition among the outside WRs of the Lions, Chark has an open path to deep targets and sideline throws at the chains. The only questions will be if Goff can make those field-stretching plays to keep Chark relevant. Chark’s addition gives Goff a slight boost on the fantasy landscape, but he’s still likely unplayable in all but deep leagues. While his success will hinge on Goff’s abilities, have confidence that Chark will be a WR3 with limited target competition in Detroit.