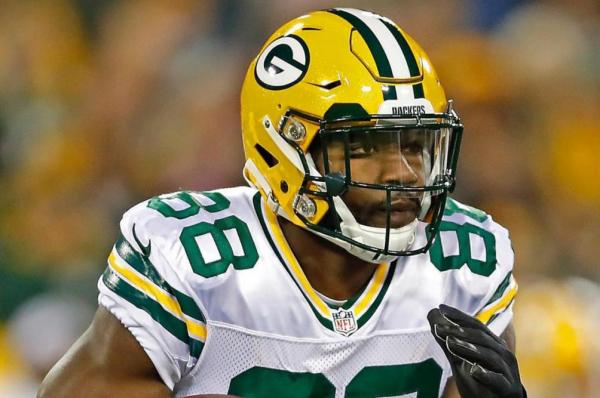 Ty Montgomery’s transition from a marginal wide receiver prospect to fantasy football RB2 status in 2016 represents the natural evolution of the modern day NFL. As previously detailed by Ben Gretch passing in the NFL is at an all-time apex of volume and efficiency. Correlated to this increase in passing volume and efficiency is the decrease in rushing attempts per team. This trend continued in 2016 where the league averaged 571 passing attempts per team completing 63-percent of all passes while attempting to run the football, a 16 year low, 416 times.

On average an NFL team will throw 6.5 targets per game to the running back accounting for 19-percent of the average team’s target share. These numbers have remained consistent since 2007 meaning that as running back carries continue to decline, a running back’s fantasy production will be intertwined to that running backs ability to excel in the passing game.

No player personifies this trend more so than Ty Montgomery. Initially listed as a wide receiver on the Packers depth chart in 2016, injuries and  the ineffectiveness of Eddie Lacy, James Starks, and Knile Davis, forced the Packers to make a move that they should have made sooner, converting Montogmery to running back.

Montgomery’s athletic suitability to the running back position smoothly translated to on field production in 2016. Since his conversion to full time running back, starting in week 5, Montgomery averaged 12.9 fantasy points which would have placed him as RB 22 on a per game basis for the season. Montgomery saw an average of 5.1 targets per game including initial target outputs of 12 and 13 in weeks six and seven. During that time period Montgomery only averaged 6.8 rushing attempts per game, only exceeding 10 carries once in week 14. Montgomery was also extremely efficient producing a +21.8 Production Premium (No. 13 among NFL running backs) and having a 34.7-percent Juke Rate (No. 3). Montgomery’s efficiency was a result of his ability to exceed in space and against  light fronts as opposed his ability to produce as a grinder. Ty Montgomery is the analogue of the current trajectory of the running back position, in that in a pass heavy league teams should be more concerned with their running backs ability to produce as a receiver  and less concerned about their running backs ability to create yardage on the ground.

Missing the majority of the 2016 season, Shane Vereen is a in a prime position to be an undervalued asset come fantasy draft time. The Giants were top 10 in passing plays in 2016 and are in a position to duplicate that performance in 2017. Giants running backs as a group saw 114 total targets in 2016 (19-percent target share and 7.1 targets per game)  With its top two target leaders at the position in Rashad Jennings and Bobby Rainey no longer on the team, Vereen is first in line to see those targets and can capitalize on the opportunity.

Shane Vereen has shown prior efficiency in the passing game in New England and his success did translate to the Giants in 2015 where he averaged 1.12 fantasy points per touch and sported a +21 Production Premium (No. 12).  While health has become a concern with Vereen, after he missed most of last season due to tearing his triceps tendon twice, Vereen’s 11.23 Agility Score (60th-percentile) and prior success in the passing game will make him a potential steal in upcoming drafts.

If Shane Vereen is unable to capitalize on this opportunity, the Giant’s off-season moves certainly indicate that they will be making a commitment to the passing back. First, they resigned Orleans Darkwa, whose 125.8 Burst Score (83rd-percentile) and 11.19 Agility Score (68th-percentile) compare similarly to Ty Montgomery, meaning he possess the athletic skill set to become an elite pass catching running back. Add to this Darkwa’s 10.4% college target share, and it becomes inevitable that Darkwa will be able to capitalize if Vereen succumbs to injury in again in 2017. In addition, the Giants also signed former 49ers satellite back Shaun Draughn, who posted a positive Production Premium in 2016 as the target leading running back in the 49ers offense. Both Darkwa and Draughn are names to monitor if Vereen again falls victim to injury.

Like Shane Vereen, Lance Dunbar also has his history of injuries woes as he missed the majority of the 2015 season and parts of 2016. Also like Vereen, Dunbar has shown productivity as a pass catching back. In 2015 Dunbar displayed an ability to be a target monster out of back field averaging 7 targets a game when healthy with Tony Romo under center. His opportunity share drastically decreased in 2016 as the third running back on the depth chart behind the highest draft capital investment at the running back position since Trent Richardson, in Ezekiel Elliot, and as a passing catching back on a team throwing the least amount of passes for the season with a rookie quarterback in Dak Prescott, under center.

Some may view Lance Dunbar signing with the LA Rams as a descending fantasy move as he is still behind a high draft capital investment in Todd Gurley on his teams depth chart, and has a far worse quarterback prospect under center in Jared Goff . However, Dunbar finds himself in a Sean McVay system which resulted in Chris Thompson, whose best comparable player is Dunbar, amassing consecutive fantasy seasons with a positive Production Premium and top 10 finishes in fantasy points per opportunity. Dunbar, and his 10.94 Agility Score (92nd-percentile) posses the athletic ability to make defenders miss in the open field, and has already displayed the ability to be used like Thompson was by McVay the past two seasons. Dunbar will most likely go undrafted in redraft, like Montgomery was last yea,r and has the potential do be a difference maker due to his pass catching acumen.

Daniel Lasco underwhelmed last season on the Saints, unable to beat out Travaris Cadet as the Saints main passing down back. While Lasco appeared primed to inherit Cadet’s target share, when Cadet appeared to be leaving the Saint’s in free agency, the Saints ultimately resigned Cadet muddling the situation a bit. While Cadet was resigned, the Saints let Tim Hightower walk. Hightower  saw about 30-percent of all fantasy running back opportunity on the Saints last season as well as 26 targets. While some fantasy prognosticators may see Ingram reclaiming the opportunity void presented by Hightower off the roster, the Saints clearly do not view Ingram as a feature back as evidenced by his timeshare with Hightower last season in which Ingram’s opportunity share decreased from 63.8-percent in 2015 to 49.4-percent in 2016. With Hightower gone, Lasco is in the pole position for an even backfield split with Ingram and could out produce the former Alabama standout because of his athletic suitability to the passing game.

Daniel Lasco dwarfs Ingram with respect to athletic ability. Lasco’s 4.46 40 time (86th-percentile) and 105.6 Speed Score (78th-percentile) compared to Mark Ingram‘s bottom percentile 4.62 40 time and 94.4 Speed Score. Further, Ingram is not even in the same universe when it comes to Lasco’s burst. Lasco’s PayerProfiler-best 138.1 Burst Score (100th-percentile) should translate to taking advantage of the holes opened up in space and an ability to break away from slower linebackers when running routes out of the backfield. While Ingram was efficient with the ball last year from a receiving standpoint, Lasco has the ability to dial up that efficiency to 11 and can be utilized in ways Ingram can only dream of, with the potential to make the Saints backfield remind fantasy footballers of the the Big Easy’s Reggie Bush and Darren Sproles eras.

Currently on the Kansas City Chief’s depth chart as a wide receiver, Albert Wilson, like Ty Montgomery circa 2015, has produced marginal NFL statistics up to this point in his career as a wide receiver. He is, at best an afterthought in a low volume Chief’s passing attack seeing only 51 and 57 targets the past two seasons and failing to produce with the little volume he has seen thus far amassing a negative Production Premium the last two seasons.

A conversion to the running back position could only be seen as a boon to his NFL career and fantasy production in 2017. Albert Wilson’s measurable would convert to the running back position similar to Ty Montgomery, as his 125.3 Burst Score, and 11.21 Agility Score would translate to an elite measurable combination instantly. Weighing in at over 200 pounds and sporting a BMI of 29.8, Wilson also has the body frame to hang as a of a modern day NFL satellite back.

Wilson as a running back on the Chiefs roster would make him the preferable passing option among Charcandrick West and Spencer Ware.  While Ware displayed uber-efficiency in the passing game on a yards per catch basis (13.5) he displayed poor elusiveness in the open field with a 21.9-percent Juke Rate (no. 42 overall). Wilson would also have no problem surpassing Charcandrick West on the depth chart. West rightfully saw a reduction in opportunity share in 2016 (31.1-percent vs. 50.4-percent in 2015) and his opportunity would bottom out with Wilson in the Chiefs backfield. West was worse than Ware in evading tacklers sporting a putrid 18.1-percent Juke Rate (no. 59). A conversion to the running back position for Wilson would add a dynamic receiving running back to the Chief’s offense without the expense of draft capital in the 2017 draft. Wilson would be the low average depth of target safety value that a QB like Alex Smith (6.8 average attempt distance, no. 33 overall) needs for success in the NFL.

Eric McClung recently profiled Curtis Samuel as a wide receiver prospect, however, Curtis Samuel‘s future in the NFL is best suited as a running back. Samuel is no stranger to the backfield as he toted the rock 97 times last season for  771 years and 8 touchdowns. Samuel also flashed big play ability lining up out wide and smoking the Big Ten, catching 74 passes for 865 years and seven touchdowns. Samuel, like Ty Montgomery was utilized all over the field in college, but unlike Montgomery was even more productive and dominate during his time playing Division-I Football posting a 29-percent College Dominator Rating (46th-percentile) compared to Montgomery’s 18-percent College Dominator Rating (20th-percentile).

Not only was Samuel more prolific in college compared to Montgomery, but he is also a superior athlete when comparing his 119.9 SPARQ-x Score (88th-percentile) compared to Montgomery’s 116.8 SPARQ-x Score (64th-percentile). Samuel’s speed, already elite for a wide receiver, would make him one of the fastest backs in the league. His 11.42 Agility Score ranks near the bottom for NFL wide receivers would place him near the average of NFL running backs, while his 122.4 Burst Score places him in elite company at the running back position. Samuel should see this athletic ability translate to fantasy success in 2017 if the right team, willing to make Samuel a full time running back, gives the card to Rodger Goodell come draft time.