There has been much talk about Evan Engram changing positions once he arrives in the National Football League. Many scouts and NFL Draft analysts believe he would be a better wide receiver than tight end. Which makes sense if you think about it because he stands 6-3 and weighs in at 234 pounds. The list of successful tight ends around this size is fairly short. In fact a quick glance at the top 25 tight ends in fantasy points per game in 2016 had three players under 6-3 and two players under 240 pounds.

Conversely, If we look at the top 25 wide receivers there are 12 players that are over 6-2 but only two that are over 230 pounds. That being said, I would imagine that with Evan Engram playing tight end in college he was trying to bulk up. If he were to make the switch to wide receiver I presume the coaches would instruct him to slim down a little. If he were to take off 5 to 10 pounds, that would put him in the same weight class as dominant big men like Julio Jones, Brandon Marshall, and Allen Robinson. Or in other words, Alpha dog territory.

So now that we have established that he has the body type of an elite receiver, lets look at his athleticism. He basically sets the standard at the tight end position. Ok, that’s a stretch, he isn’t Vernon Davis, but he isn’t very far off. We wanted to see how he would stack up as a wide receiver so we flipped his position in the playerpofiler.com database just to see. The results were…. Impressive.

As we all know, production is the be all end all of fantasy football analysis. There are very few successful pros that were not dominate in college. Here is a comparison of his production metrics at each position.

This is where it starts to get really exciting. What if we combine his wide receiver athleticism metrics with his tight end production metrics? There is no perfect way to compare players of two different positions, because with production we are comparing two players that were asked to do different things, but with athleticism it doesn’t matter which position he plays, he will still be the same athlete. So I took his tight end production metrics and his wide receiver workout metrics and combined them into the profile below. 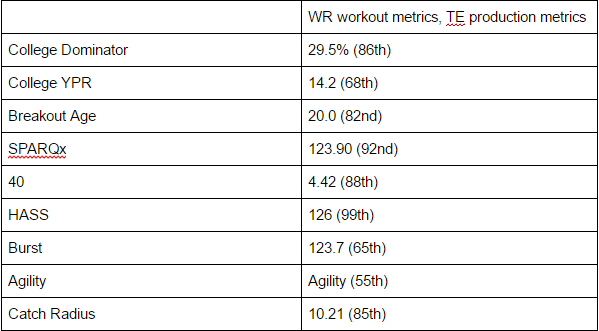 If this was his actual profile as a wide receiver, where would he rate among wide receivers on your draft board? I can’t see any argument to have him lower than the #3 wide receiver, and I can definitely make an argument that he would be in the running for not only the #1 wide receiver in the draft but also potentially the #1 player overall in dynasty rookie drafts.

We can day dream all we want about the possibilities of combining his profile, but what if we just left it as is and flipped the switch on him to wide receiver, who would we get for comparables? These are the five players that he matches most similarly with as a wide receiver:

Marques Colston is the closest comparable and it makes perfect sense. Marques Colston also played tight end in college but was deemed ‘too small’ for an NFL tight end so he made the transition. In 10 seasons he accumulated 9,759 yards to go along with 72 touchdowns. That is incredibly consistent production for an average of 976 yards and 7.2 touchdowns per season. In all, he amassed three WR1 seasons, three WR2 seasons, and three WR3 seasons.

Most NFL Draft prospect ranking services have him ranked second to fourth with the majority ranking him third behind O.J. Howard and David Njoku. Here are the college metrics for each of the top-4 tight end prospects in the 2017 NFL Draft. 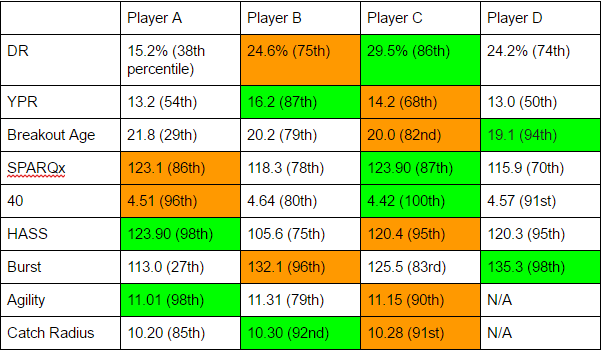 The color coding really illustrates which of these players is most impressive from a production and athleticism standpoint. The grand reveal is:

Let’s go back to Evan Engram’s size again. This is literally the only thing holding him back. If he was 6-5 and 250 pounds he would easily be the No. 1 tight end prospect. Alas, he isn’t. But, there is precedent for undersized tight ends being productive at the NFL level. This isn’t pioneer territory. We talked about it earlier, there were a couple of undersized tight ends that were productive as recently as last year. In fact, the most productive tight end in fantasy points per game was Jordan Reed. The same Jordan Reed that Evan Engram is most commonly compared to. But that is a lazy comparison. The only things they have in common is their size and position.

Let’s get back into discussing his current competition in rookie drafts. O.J. Howard is the consensus No. tight end prospect, projected by most analysts to be selected in the top-15 players in the NFL Draft. I don’t dispute that Howard is the best all around tight end in the draft. My only reservation is that O.J. Howard strikes me as a player that is going to be an exceptional NFL player, but an average-to-good fantasy producer.

Now that we have established that a conversation should be had about where we are ranking Evan Engram amongst this year’s tight ends. Lets talk about where he should rank amongst the wide receivers in this draft class.

When drafting players you should take into consideration both the ceiling and the floor of the players in question. Evan Engram’s floor is as a very high end TE if you think he can overcome his size disadvantage. His ceiling is very high end WR if you think he will make the transition. There is no other player in the 2017 class that has that kind of safety and potential.