Introducing first, in the RED CORNER: representing the Jacksonville Jaguars, standing 6-3 and (allegedly) now weighing in at 210-pounds: “THE FLASH” DARRELL CHARK JR.

His opponent, in the BLUE CORNER: representing the Carolina Panthers, standing 6-0, and weighing in at 210-pounds: “SLEEPY” DENNISTON MOORE JR.

Two receivers destined to break out both face an intriguing fourth year in the NFL. After catching balls from subpar quarterbacks for their first three years, both have new starters at the helm. Both D.J. Moore and D.J. Chark had breakout campaigns in 2019, which set the bar high for 2020. While Chark wasn’t able to stay on the field, Moore disappointed as the third receiver on his team in terms of fantasy points.

Moore has been the darling of The Underworld; Meanwhile, Chark has seen his value fluctuate. Which 24-year-old is the proper buy low? While it seems like this is an easy answer, there’s a lot more to dive into than what meets the eye.

D.J. Moore has been the far more consistent player thus far. He has two consecutive seasons with over 1,100 yards while still compiling 788 in his rookie season. He did this catching passes from seven different quarterbacks who threw ten touchdowns to 21 interceptions when targeted. His situation has been far from ideal, but he’s still given you something. The most impressive aspect is the way he produced.

Moore went from a system with coach Ron Rivera, where he had an 11.3 (No. 53 among qualified wide receivers) Average Target Distance mark, to Joe Brady, who helped him to a 13.4 (No. 21) Average Target Distance. For Rivera, he played closer to the line of scrimmage where he could capitalize on volume, securing 21 more receptions in 2019 than he did last season. Although the end-of-year results were similar, the consistency was not. How much fault should be laid on the quarterback?

Although Moore had fewer targets, he saw more downfield opportunities. He ranked No. 8 with 818 Completed Air Yards and 757 Unrealized Air Yards. He had a 5.9 (No. 39) Target Quality Rating while seeing a 6.89 (No. 83) Target Accuracy Rating. With Sam Darnold coming to Carolina, can we expect those numbers to increase?

Using a quick-striking pass attack, the Panthers were able to spread the field out and reduce pressure. This was highlighted in Curtis Samuel’s 7.2 (No. 98) Average Target Distance and Robby Anderson’s 9.6 (No. 64) mark. If Darnold can deliver the ball efficiently, the concern for Moore will then shift to his usage.

The signing of Robby Anderson led many to believe he would be Carolina’s deep threat while D.J. Moore assumed his alpha role, but those roles were reversed. Moore acting as the deep threat made him highly volatile. He had six finishes where he didn’t hit double-digit fantasy points in 2020, doubling his mark from 2019. After losing Curtis Samuel, we could see yet another position change for Moore in 2021.

The Panthers invested the No. 27 pick in the NFL Draft’s second round on LSU wide receiver Terrace Marshall. Samuel and Marshall couldn’t be more of a polar opposite in terms of physical profile. While Samuel is more of the typical slot type, Marshall is a big play receiver who averaged 15.2 yards per reception while bringing in 10 touchdowns during 2020. Marshall can work as a big slot receiver, but in 2021, Carolina will most likely use him in a field-stretching role on the outside, the role Moore played in 2020. There is a narrative about Marshall falling into a role which was assumed by Michael Thomas when Joe Brady was the offensive assistance for the Saints. However, he only played 20-percent and 25-percent of his snaps in the slot during those two seasons; Moore shouldn’t be affected.

D.J. Moore doesn’t belong as a deep threat. Although he wasn’t terrible at the position, signs pointed to him belonging as the short to intermediate route runner. Last year he had 10 (No. 2) drops, a 75.9-percent (No. 94) True Catch Rate, and a 50.0-percent (No. 38) Contested Catch Rate; all were significant drops from his 2019 marks.

Using Terrace Marshall on the outside would allow Moore to get more work in the slot. Having more targets closer to the line would decrease the volatility we saw in 2020 by increasing his catch percentage and letting him work after the catch. Curtis Samuel‘s fantasy production edged out Moore’s in 2020, but what if Moore is better? He’s bigger and more athletic, with an earlier Breakout Age and a higher College Dominator Rating. As Moore continues to develop in every facet of his game, it seems he is poised for a massive year.

Following the 2018 season, it looked like another year of disappointments and wasted picks for the Jacksonville Jaguars. Their second-round receiver out of LSU couldn’t stay on the field and didn’t show much promise even in his 11 appearances. While only corralling 43.8-percent of his targets, he amassed a disappointing 174 yards and zero touchdowns. D.J. Chark knew he wasn’t long for the NFL if his rookie season repeated, so he took massive strides to progress during the 2019 offseason.

Chark started 2019 on fire, putting up 485 yards and five touchdowns over the first five games. Quarterback Gardner Minshew played efficiently, logging at least a 97.2 QBR in all five. As teams started to figure out the Jacksonville offense, and more importantly Minshew, they began to limit Chark’s effectiveness. Minshew only saw his QBR hit 97.2 three times the rest of the season, while he only completed more than 60-percent of his passes to Chark once.

While those stats leave most unimpressed, looking at what he had to work with makes one wonder what could have been. Although the playcalling allowed him to have a 6.5 (No. 24) Target Quality Rating, he had a measly 6.82 (No. 66) Target Accuracy mark. The poor quarterback play not only led to 26.5-percent of his targets being contested, it also resulted in only recording 281 (No. 31) yards after the catch.

Last year only got worse. Jay Gruden took over as the playcaller and the Target Quality Rating dropped to 5.4 (No. 64). Jacksonville added Laviska Shenault, which arguably took away from Chark. They attempted 27 more passes, yet Chark saw almost one less per game. The combination of Minshew, Mike Glennon, and Jake Luton produced even worse than 2019 as Chark’s Target Accuracy fell to 6.54 (No. 98). He then closed out 2020 missing three games.

However, the most critical decision throughout the 2021 offseason was Meyer deciding to add Darrel Bevell to his coaching staff.

Bevell was the offensive coordinator who helped Russell Wilson achieve a 7.8 Adjusted Yards Per Attempt average while he was in Seattle. He then goes to Detroit, where Matthew Stafford only hit 7.8 once in ten years. Stafford went on to beat that mark in two consecutive years. Although he has seen wild success with quarterback efficiency, he has been asked to run offenses which feature the run. There have only been five offenses which weren’t in the bottom half of the league in pass attempts since taking over as the Vikings offensive coordinator in 2006.

Meyers’ offenses in college also tended to operate through the run game. There’s one significant stat to note. Both Meyer and Bevell’s defenses have been dominant. Outside of Bevell’s time with Detroit, there’s only been one time where his team’s defense wasn’t in the top half of the league in points allowed. As for Meyer, the worst his defense has finished was No. 33 of 120. They won’t have the same luxury with a rebuilding Jacksonville defense. Expect the Jaguars to throw early and often with one of the best prospects coming out at the quarterback position.

Where is Each Player Drafted in Dynasty?

Most would take D.J. Moore and run without a thought. His continued production, physical profile, and health give him an evident hand up. However, Moore is going as WR13 in dynasty as the No. 36 pick overall, versus D.J. Chark as WR30 at No. 66.

I’m proposing a handicap for this fight.

Value is so vital while weighing two options. As mentioned above, Chark and Moore were back to back in fantasy finishes in 2019. If Chark received consistent quarterback play from Weeks 6 to 17, he would have blown Moore out of the water. The fact Chark can be had four rounds later and see a similar fantasy output is enticing.

Is Taking a Receiver Early the Best Investment?

When drafting, making the correct selection is the most critical; However, how you invest is essential as well. While D.J. Moore might entice you, it’s important to note the dropoff for a secondary or even tertiary receiver’s fantasy points scored doesn’t evaporate nearly as much as a running back’s. 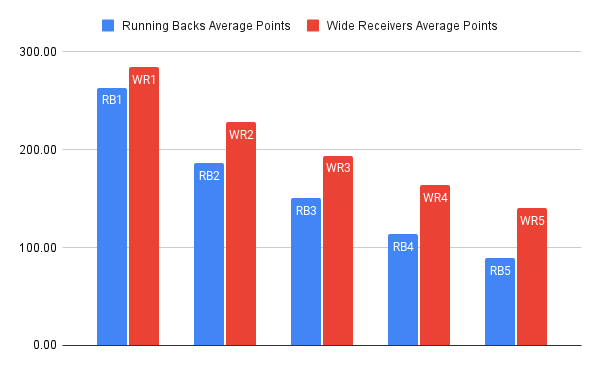 Although there is a dropoff for wide receiver, the average of WR13-24 still produced over 80-percent of WR1-12 production in 2020. Comparing the RB2’s average points to what the RB1 produced, the drop-off was almost 30-percent. Zooming out, the difference in output is virtually identical to where D.J. Chark is being drafted (WR30) versus Moore (WR13) at 30.4-percent.

The value lost is tremendously more crucial if you draft a WR1 over an RB1.

In addition, receiver is among the most challenging positions to identify success at. According to Fantasy Football Calculator, only three wide receivers who had an average draft position in the top 12 finished as a WR1. Compared to the seven of 12 at the running back position, drafting a receiver early could be consequential to the success of fantasy teams.

How Are They Valued? 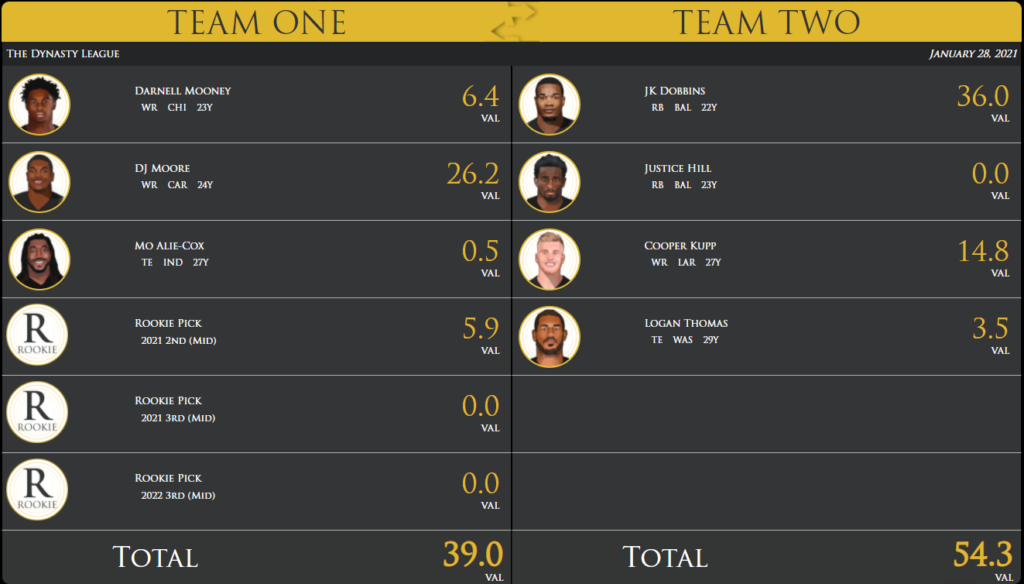 The value given up for him is astronomical.

As mentioned, giving up a top-tier running back is never ideal, especially one who had a late breakout campaign. The most exciting part about the trade above is the addition of Cooper Kupp, primarily because you can get D.J. Chark and a third-round rookie pick for him.

It might not have been a clean fight. It turns out what you thought was a boxing match turned into WWE. Just when you thought D.J. Chark would be down for the count, J.K. Dobbins came off the top rope with an elbow drop on D.J. Moore. However, we must take value into context. Even without Dobbins’ random outside interference, there is a case to be made for Chark. With solid quarterback play, could we see a repeat of the first five games in 2019?

Trevor Lawrence and Gardner Minshew should never be compared. Lawrence is a generational talent who passed for 1,800 more yards and 28 more touchdowns on 30 fewer attempts in his collegiate career. Minshew will forever be a legend, but there’s a reason he was picked in the sixth round. To think he is the best quarterback Chark has played with at the professional level makes the arrival of Lawrence so much sweeter. Lawrence’s 9.0 (78th-percentile) College YPA has The Flash shareholders eager to get this season started.

Although Sam Darnold does signal an upgrade at quarterback in Carolina, there’s no comparing to the upside Lawrence offers.

The Winner: “The Flash” D.J. Chark