Terry McLaurin’s 2019 breakout campaign caught the attention of every fantasy gamer last season. He was an extreme value, often going undrafted in seasonal leagues. What made him such an incredible value, overlooked prospect, and absolute stud in fantasy drafts? Where can we find the nextoverlooked stud? PlayerProfiler’s advanced stats, metrics and analytics can help us identify breakout candidates in 2020.

McLaurin’s biggest downfall was the perception of poor quarterback play drawing gamers away from this offense entirely. The uncertainty from Case Keenum to Colt McCoy, to Dwayne Haskins made fantasy players uneasy. While quarterback play does matter in player evaluation, truly talented wide receivers will emerge regardless. Allen Robinson and DeAndre Hopkins can attest to this. McLaurin’s value was further suppressed by the perception of target competition from teammates Paul Richardson, Trey Quinn, Jordan Reed, Derrius Guice, and fellow rookie Kelvin Harmon. His lack of production at Ohio State with no true Breakout Age led many to pass on McLaurin in fantasy. In reality, McLaurin was a low cost, high-upside player in a weak receiving room.

Our parameters for finding the next McLaurin are: perception of bad quarterback play, a “crowded” offense, and a low ADP.

N’Keal Harry is the best candidate to be the next low risk/high reward wide receiver in fantasy drafts this season. His current FFPC ADP puts him in the 16th round (low ADP). Though all New England skill position players are devalued due to Jarrett Stidham and Brian Hoyer being the quarterbacks (perception of bad QB play). Lastly, Harry is perceived to have stiff competition from Julian Edelman, Mohamed Sanu, and James White (crowded offense). Nobody should be surprised when Harry outperforms all three of these guys in 2020.

Do not forget that Harry was a talented prospect, a top 5 rookie selection in dynasty leagues and a first round pick in the NFL Draft. He has an 18.7 (95th-percentile among qualified wide receivers) Breakout Age with a 43.9-percent (89th-percentile) College Dominator Rating. He displayed above-average athleticism with a 109.8 (90th-percentile) Speed Score, a 126.5 (78th-percentile) Burst Score, and a 4.53 (56th-percentile) 40-yard dash. It is easy to rationalize his lack of production in 2019 due to injury and difficulty learning the Patriots playbook. His early career learning curve has suppressed his ADP, making him a value in 2020 drafts. He also spent plenty of time working with the second team offense and incumbent starter Jarrett Stidham.

The final bit of evidence for Harry to have ample volume comes from the team’s difficult strength of schedule for 2020.

A better way to consider 2020 strength of schedule is by using projected 2020 win totals from the betting market.

Using odds from multiple sportsbooks updated as of today…

The 2019 season presented the Patriots with a historically easy schedule. Expect that to change in 2020, and expect more passing plays from the offense.

While on the subject of negative game script and difficult strength of schedule, the New York Giants and their respective passing offense jump off the page as screaming values. Darius Slayton, Sterling Shepard, and Golden Tate are all values at their respective ADPs. Slayton is an easy selection with the highest ceiling of the group.

Slayton performed well at the 2019 NFL Scouting Combine, posting a 4.39 (95th-percentile) 40-yard dash, a 102.3 (75th-percentile) Speed Score, and a 11.15 (60th-percentile) Agility Score. His college production metrics are good, with 19.1 (90th-percentile) college yards per reception and a 20.7 (46th-percentile) Breakout Age. His athletic profile offers more upside than oft-injured 27 year old Shepard, and aging YAC monster Tate. When looking deeper into the 2019 opportunity metrics, these receivers are more similar than meets the eye. 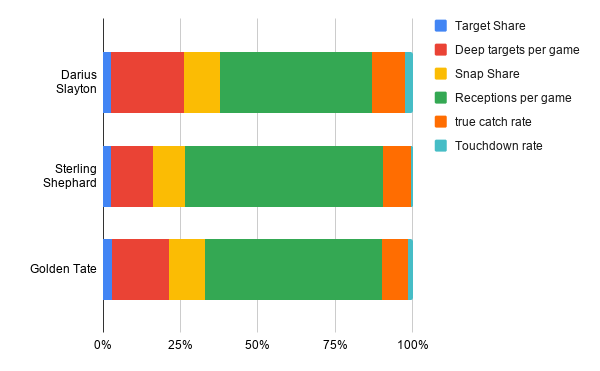 None of these players played the whole season. All three commanded significant opportunities when healthy. Slayton offers the most upside on deep targets and in the red zone, the areas of the field where the most fantasy points are accrued. Shepard has the higher floor in this offense, but Slayton has the higher ceiling. His deep threat ability and red zone potential make him a value at his cost, being taken outside the top 100 players. Saquon Barkley is extremely talented and has a defined role, but his presence will not impede an alpha from emerging. The same can be said for Evan Engram, the most fragile tight end in football. Slayton’s player profile and rookie year production place him directly on path to emerge as the lead target in the Giants passing game.

Why not Denzel Mims? Sam Darnold has not produced top numbers, but has shown that he is a true gunslinger with upside. Mims has above average athleticism across the board with a 115.6 (96th-percentile) Speed Score, a 4.38 (96th-percentile) 40-yard dash, a 131.0 (90th-percentile) Burst Score, and a 11.09 (67th-percentile) Agility Score. He owns an 85th-percentile College Dominator Rating with a 60th-percentile college YPR and a 67th-percentile Breakout Age. His Best Comparable Player is Chris Godwin. Mims showed up at the Senior Bowl, performed admirably at Baylor, and has a clear path to be a significant contributor in his passing game. 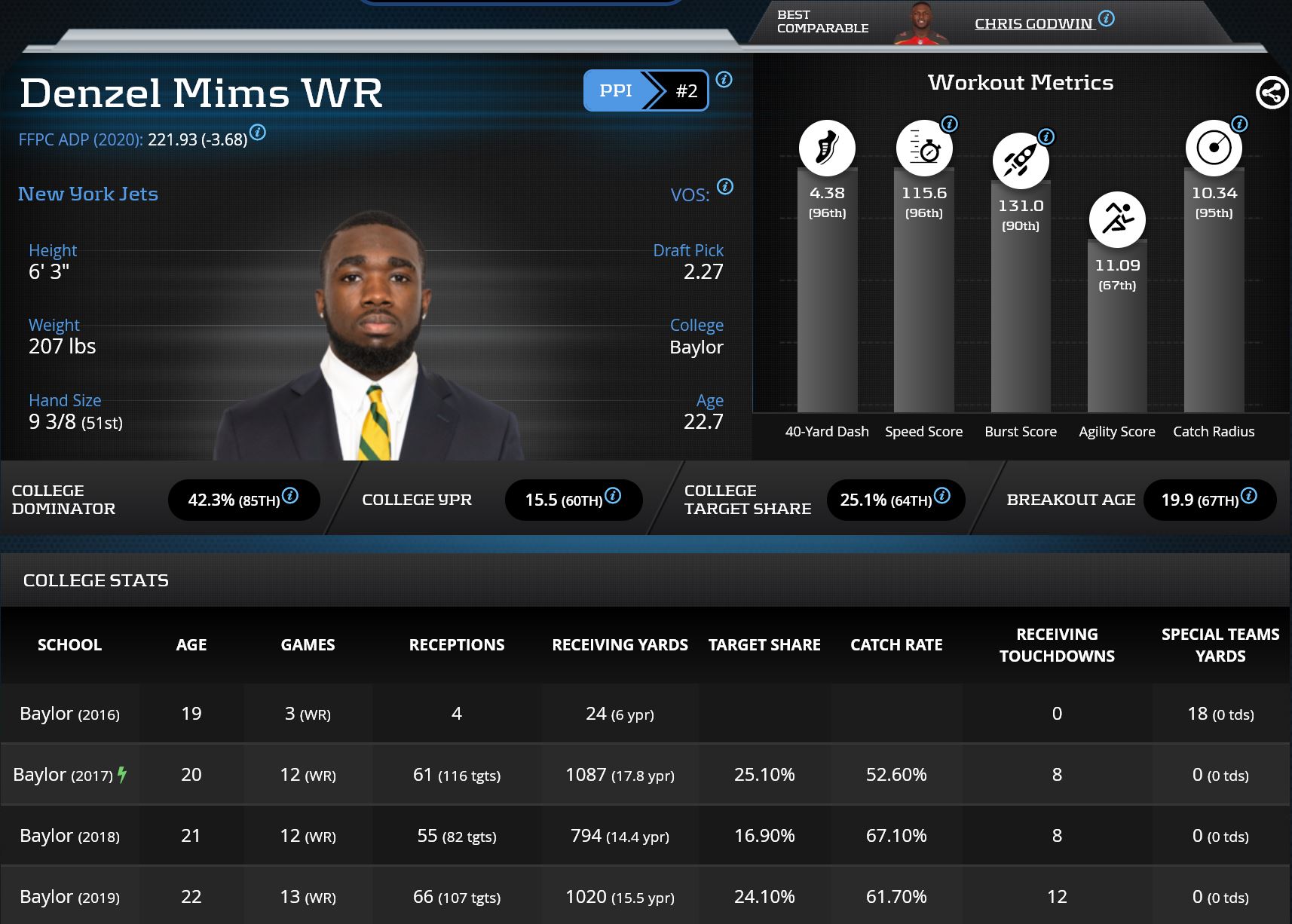 There will be some productivity out of the Jets offense despite a difficult schedule, and Mims has an easy depth chart to climb. His competition includes first round bust Breshad Perriman and slot receiver Jamison Crowder. In 2019, Crowder had 78 (No. 16) receptions but only averaged 12.4 (No 36) Fantasy Points per Game. He’s not the definitive No. 1 in this offense given his lackluster efficiency in the face of high volume. Darnold simply had nobody else to throw it to.

Perriman’s value when active came entirely from scoring six touchdowns. He had only 521 (No. 37) Completed Air Yards and averaged 17.9 (No. 6) yards per reception. This all occurred under the helm of erratic deep ball passer Jameis Winston, and only when both Chris Godwin and Mike Evans were injured. Perriman will play a role on this offense by replacing Robby Anderson as a deep threat. Anderson was not a profitable player to draft in 2019 and his production last season is Perriman’s ceiling for 2020. There is a clear role available for Mims from day one and he’s being drafted well after his teammates.

Overall, N’Keal Harry, Darius Slayton, and Denzel Mims are all high upside prospects with low ADPs, questionable quarterback play, and an easy path to WR1 status on their team. When it comes to late round fliers, these are the cheapest players with the highest upside. Draft all three if you can, but you will regret leaving your draft with none of them.