No Dak, No Gain

On the heels of a straight-up embarrassing romp of the Washington Football Team, Dak Prescott and the Cowboys host the Cardinals. After a string of subpar outings, Prescott broke out in a big way for his best game of the season (330 Passing Yards and 4 Passing Touchdowns for 34.3 DKPt). Although everyone certainly will want a piece of this offense after watching the prime-time blowout of the WFT, his ownership will naturally shrink based on the sheer number of games (14) on the slate. 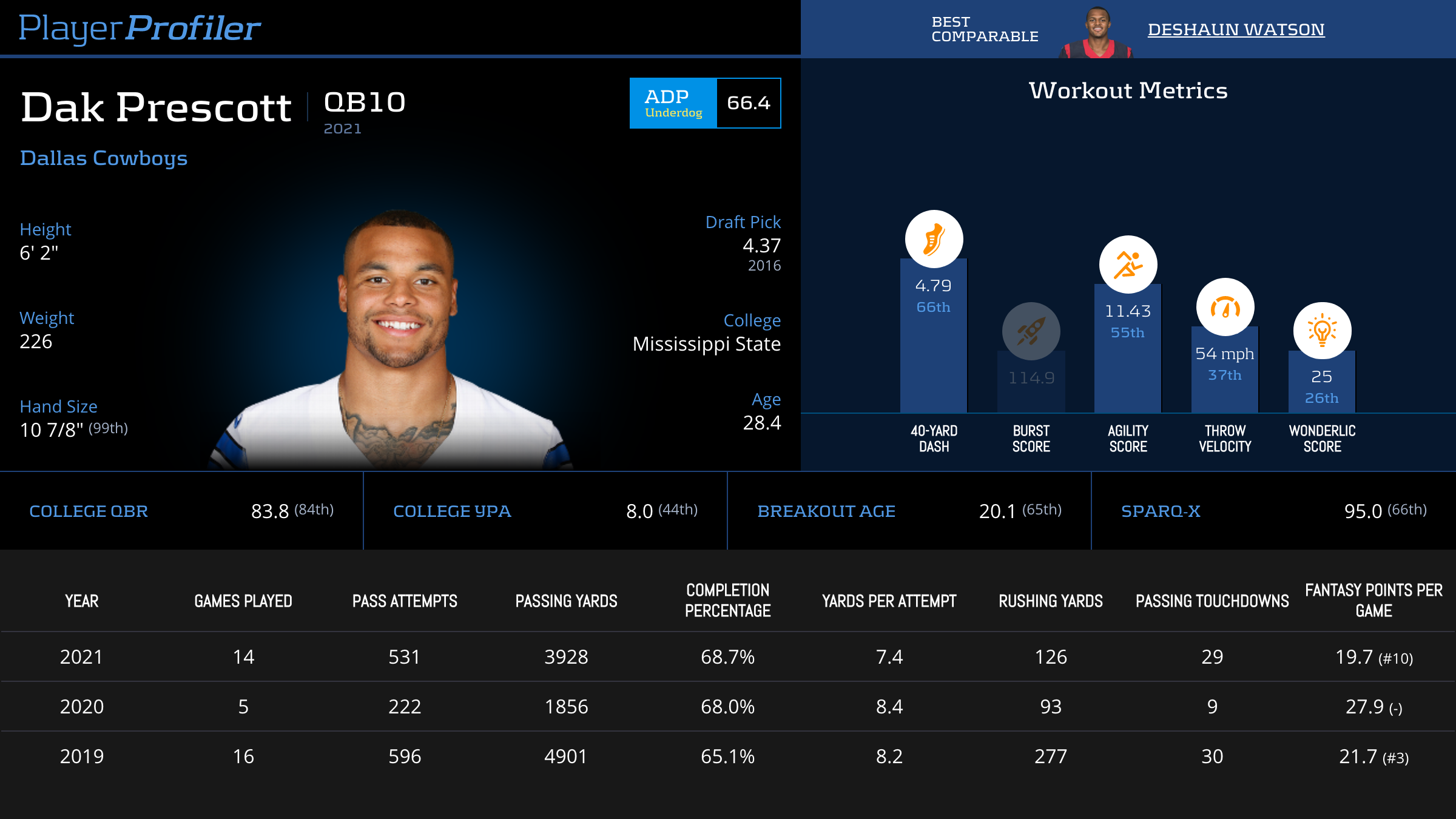 The Cowboys/Cardinals game should provide a natural environment for an abundance of fantasy points. The game owns the highest Vegas over/under on the slate (51), ranks No. 1 for Pace of Play and will be played indoors (a boon to offenses in these frigid weeks where weather becomes a factor). Although the Cardinals have been stout against the position (No. 28 in fantasy points allowed to quarterbacks), they do allow a 75-percent Passing Touchdown rate (No. 2 worst) where Dallas scores a nearly equal 71-percent of their offensive scores (No. 4). Over the past four games, Arizona has allowed the No. 7 most fantasy points to opposing quarterbacks. Pair Prescott up with Amari Cooper, who led the team in Week 16 with a season-high 27.5-percent Target Share.

Josh Allen‘s ceiling is sky-high in Week 17 (check the Upside Finder). Fantasy football’s QB1, Allen gets his shot at an overmatched Falcons defense that allows the No. 3 most fantasy points to quarterbacks. The Falcons also rank dead last in a number of notable defensive categories including Pressure Percentage (24-percent), Sack Percentage (2.8-percent), and Clean Pocket Percentage (72-percent) (h/t Rotogrinders). Although it appears negligible after Isaiah McKenzie went nuclear, Allen should also get Gabriel Davis and Cole Beasley back from the COVID/Reserve.

With Jimmy Garoppolo listed as doubtful, electric rookie Trey Lance looks to make his second career start against the Texans. Though his first start left something to be desired, Lance’s outlook for Week 17 is encouraging. In Lance’s first start, he was without star George Kittle and faced a much stronger (at the time) Arizona Cardinals defense. This week’s opponent, the Texans, have been vulnerable on the ground. They have allowed the No. 2 most Rushing Yards Per Game (132/gm) and the No. 1 most rushes of 10-plus yards (64). Lance should be the chalk quarterback option but is tournament viable because his cheap salary allows you to stuff in studs such as Jonathan Taylor and Cooper Kupp. Run him naked or pair him with Kittle plus a Cooks run-back.

…And a RoJo New Year

With Leonard Fournette shelved on IR with a hamstring injury, next man up, Ronald Jones looked like an adequate fill-in. Jones’ 16 DKPt effort was fine to 3x his cheap salary last week, but his role and matchup should out-produce that effort in Week 17. 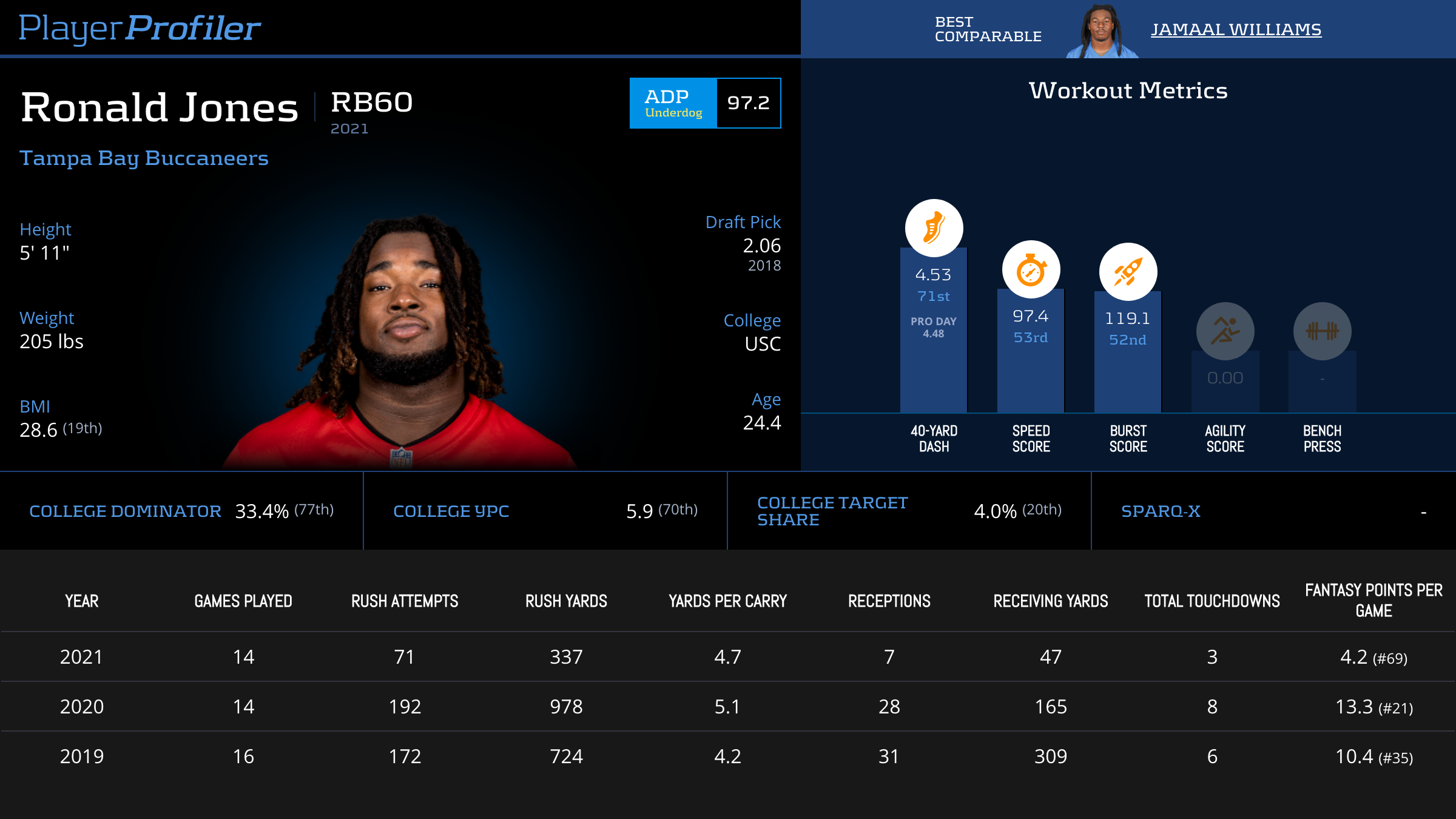 The Buccaneers hold a slate-high 29.5 implied Vegas team total. Expect a lot of these points to come via the ground, as teams run on the Jets at a league-high 45-percent clip. Jones saw a solid 53-percent Snap Share and 20 Rush Attempts (to seven carries for Ke’Shawn Vaughn) in his first spot start. Pair Jones with Antonio Brown as a correlated secondary stack as they should account for a bulk of the Bucs’ fantasy output.

With no major news at the running back position, David Montgomery looks like the slate’s best point-per-dollar play at running back. Even as the Bears have been mathematically eliminated from the playoffs, his workload appears secure. In Week 16, for example, Montgomery handled 21 Rush Attempts and saw a team-high 25-percent Target Share. No other running back on the slate has a higher Opportunity Share (80-percent) than Montgomery. The Giants allow the most Yards Before Contact (2.29/avg). Get different elsewhere and eat the Montgomery chalk.

As the Bills implied Vegas total creeps around 30, it’s time to consider rostering a Bills running back. Devin Singletary has spent a lot of the season on the “banned-list” because of the cloudy situation at the position and the obstacle that is his quarterback. However, with such a massive total, all the Bills skill-position players could over-achieve in this spot against a run-down Falcons defense. Singletary himself has started to separate from the pack in recent weeks, logging a notable 83-percent Snap Share over the past three weeks. He should keep his touchdown streak alive (having scored in back to back games) against a Falcons defense that allows a 52-percent Rush Success Rate (No. 6 worst).

Cooper Kupp‘s expensive salary looks to be putting a bit of a dent in his projected ownership (15-percent looks like light chalk) despite being the clear cut WR1. His accolades are next-level as he chases receiving records in the waning games of the season.

Jalen Ramsey hopes Cooper Kupp “goes crazy this week” and breaks every record he can this season. https://t.co/PUHr32Rchm

Expect more manufactured touches for Kupp to fit this narrative. His 33-percent Target Share and 3.37 Yards Per Route Run rank No. 1 among all wide receivers. Note that over the past month, no team allows more fantasy points to rival wide receivers than the Ravens.

The wide receiver situation for the Bucs remains murky but as it stands, Antonio Brown looks like the best bet to succeed. Coming back from injury/suspension Brown wasted no time in taking control of a dire situation. In Week 16, Brown accounted for a ridiculous 51-percent Target Share (on 15 Targets) and 55-percent Air Yards Share while posting 23.1 DKPt. Mike Evans has yet to be taken off the COVID-19/Reserve list so we could see another healthy dose of the Brady/Brown connection.

Buoyed by an unexpectedly competent David Mills, Brandin Cooks has now eclipsed 20 DKPt in back to back games. Although he missed Week 16’s stunning upset win over the Chargers while on the COVID-19/Reserve list, he has since been activated and has returned to practice. Among Week 17 wideouts, Cooks ranks No. 3 with a 40-percent Air Yards Share and No. 4 with a 27.3-percent Target Share. The 49ers have allowed the No. 10 most fantasy points to opposing receivers this season.

Projecting at only 1.2-percent ownership, Dalton Schultz looks like the most overlooked piece from the Cowboys side of the ball. Schultz gets a great game environment in a weather-controlled dome in a game ranked No. 1 in Pace of Play. Schultz has shown tournament-winning upside while surpassing 20 DKPt in back-to-back games. The Cardinals have been suspect within 10 yards of the LOS allowing a 55-percent Pass Rate in that area where Shultz mostly operates. 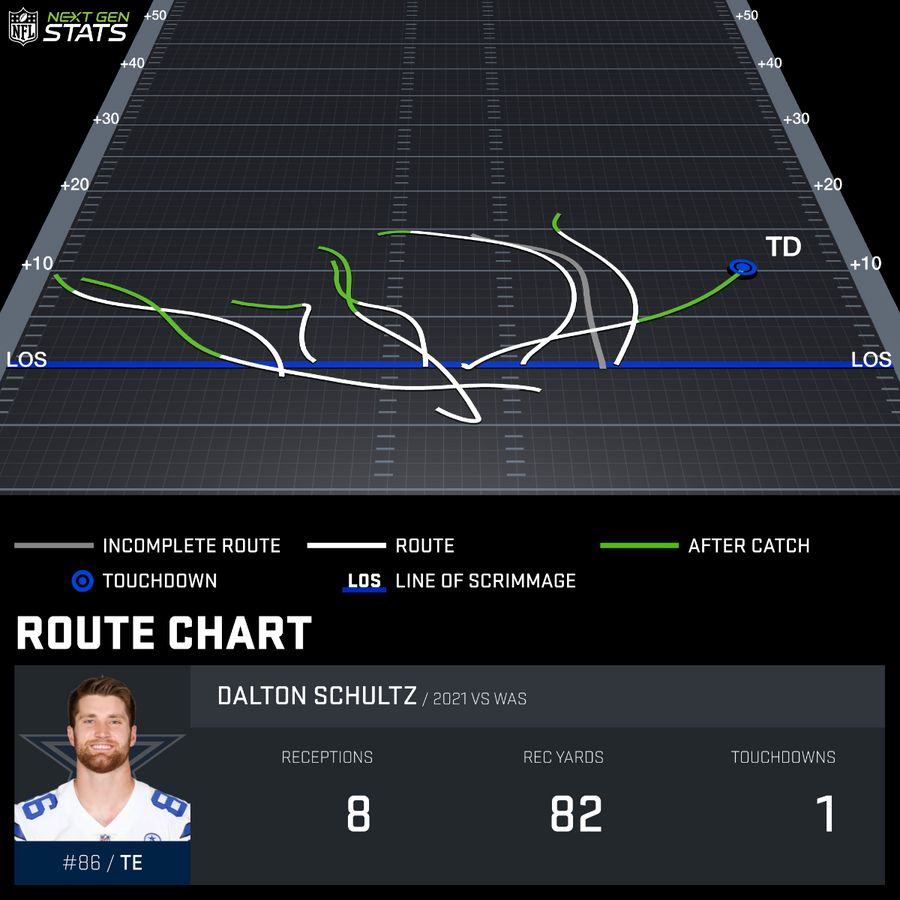 It’s hard not to go back to the well with Rob Gronkowski despite ghosting fantasy gamers in Week 16. It looks like we’re getting another week without Chris Godwin and potentially Mike Evans (monitor this). With these key pieces of the Bucs offense missing, expect Brady to find ways to get Gronkowski more involved in what should be a manageable matchup against the Jets. Gronkowski is a close second to Mark Andrews with 1.10 Deep Targets Per Game (that’s more than you might think). Teams are taking deep shots against the Jets too as evidenced by them allowing a 12.42-percent pass rate for passes of 20-plus yards (ranking last for the category).