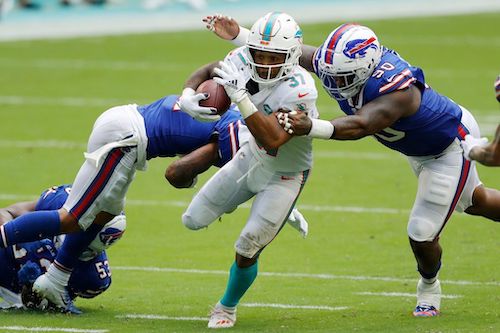 The Weighted Opportunities DFS Value Index identifies undervalued running backs in daily fantasy. Each week, we will compare Weighted Opportunities Per Game and Opportunity Shares against FanDuel salaries at the running back position. Slight adjustments will be made to the final ranking to account for projected personnel changes, matchups, Game Script, and other information the value metric cannot capture on its own. The focus will be on players at or under $6,500 salary on FanDuel. The best lineups can and should be based around the true workhorse RBs, but these value plays can be useful to differentiate GPP lineups or find sneaky values in cash.

Week 5 was not as fruitful as Week 4, but we still got solid value over cost from Myles Gaskin and Devonta Freeman. David Johnson, Kenyan Drake, and Antonio Gibson were serviceable, but not difference makers. On the other hand, Malcolm Brown, Devin Singletary, and Duke Johnson did not deliver. Singletary was particularly disappointing with the Bills offense looking out of sorts apart from the excellent play of Stefon Diggs. Let’s roll on to Week 6 plays!

Damien Harris was the smash value play that never happened last week due to the game cancellation. Now, his salary has been bumped up to match his increased expectation. He still has a decent value rating though, and upside to boot.

The Belichick backfield carousel is the primary concern, but Rex Burkhead and James White are less likely to take touches in a positive Game Script situation. Harris is in a smash spot in a game the Patriots are heavily favored to win against the Broncos.

Antonio Gibson has a chance this week to finally see better Game Script with the Football Team facing off against another bottom dweller, the New York Giants. Gibson is the leader of the backfield committee in Washington and sees the largest percentage of their goal line work. On the surface, this is a good spot for him, but the quarterback problem clouds the situation. It is probably best to avoid Washington skill players until they find a starter that can reliably move the offense downfield.

The Giants offense finally came alive last week, as most teams do against the Cowboys. Devonta Freeman continues to see a majority of the team’s opportunities. His Snap Share stayed relatively stable from Week 4 to Week 5.

Moving forward, we can expect Freeman to receive slightly over 50-percent of both the opportunities and snaps. At $5,600, that will be good value when the Giants score points. A matchup with Washington and their fearsome front seven will limit his upside for this week.

At some point, the Lions will move away from giving half of their Opportunity Share to a 35-year old running back. Still, Adrian Peterson will be a weekly value with reasonable touchdown upside as long as he is getting the touches. He is also seeing the majority of the high value looks with 12 (No. 18) Red Zone touches on the year. Peterson deserves consideration as a low-owned GPP play in a potential shootout against the Jaguars.

David Johnson continues to be a weekly value based on his 83.4-percent (No. 3) Snap Share and resulting 80.4-percent Opportunity Share. Even with Bill O’Brien out of town, Johnson continued to see a high share of the Texans offense last week. Houston will have to put up points this week to keep up with a Titans offense that has been rolling. Johnson is a good play in cash due to his high usage floor.

Coming off his best game of the season in Week 5, David Montgomery still has a reasonable price tag this week against the Panthers. Carolina has played surprisingly well on defense this year, but allowed Todd Gurley to go off for 121 yards and a touchdown on the ground last week.

Montgomery has been on the field more since Tarik Cohen’s injury and should continue to see touches in a competitive game. He has both a high floor and a high ceiling, making him playable in all formats.

Frank Gore looked like a clear avoid after posting only nine carries and a 36.1-percent Snap Share last week against Arizona. Now that the Jets have waived their former marquee back Le’Veon Bell, Gore becomes much more interesting. The veteran back saw 21 and 15 carries respectively in games against the 49ers and Colts where the Jets got absolutely plastered earlier this year. As long as Gase is running the offense, Gore has a decent floor. He should hit value against Miami at $5,000, but has limited upside due to the lack of receiving work he sees at this point in his career.

James Robinson had his worst game of the season last week against the Texans, but still managed to put up a decent stat line with 70 yards on 18 touches. Minshew has shown a reliable penchant to target his running backs and Robinson is seeing the majority of the passing down work. 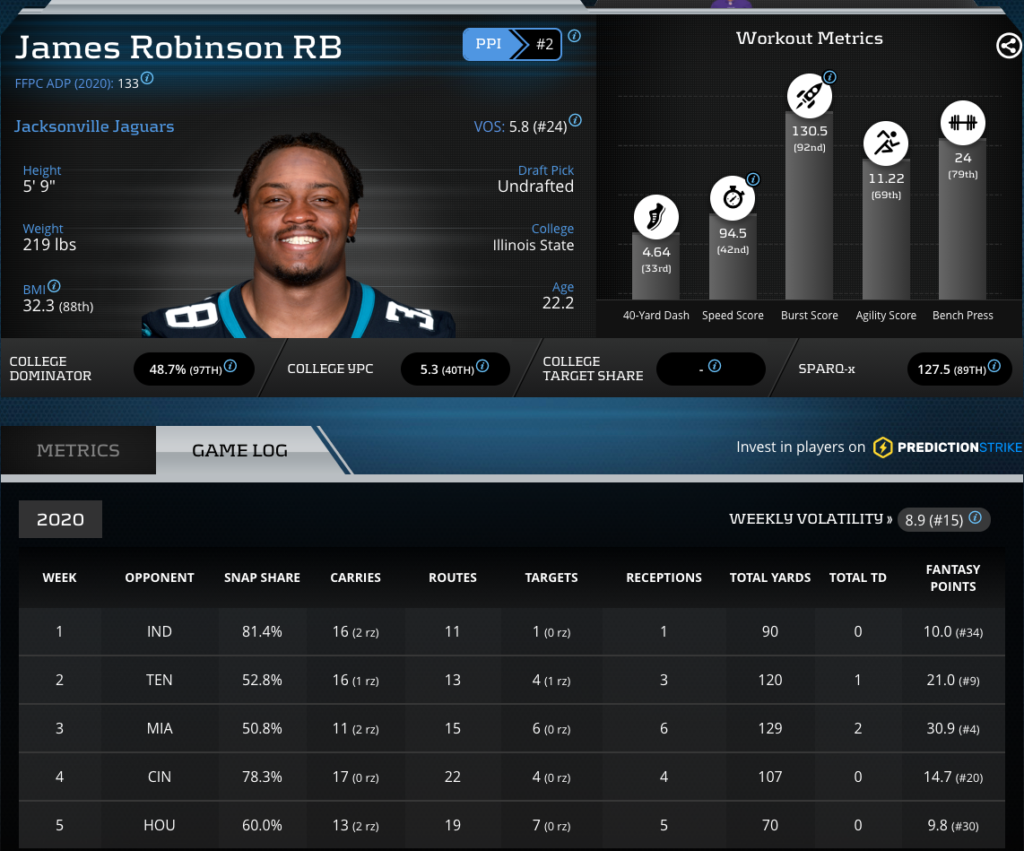 In a possible shootout against the Lions, Robinson can be used in all formats with confidence.

Myles Gaskin has come from out of nowhere to lead the Dolphins backfield, but it does not seem that will change any time soon. Gaskin is a legitimate NFL starter and is still being priced in the range of committee backs. Until FanDuel increases his price, he should be a weekly part of winning lineups. In addition, Gaskin draws a great matchup this week against a Jets defense that has been torched all year.

Two things can be true. Ronald Jones will not maintain his 51.9-percent (No. 26) Opportunity Share with Leonard Fournette returning from injury. Yet, Jones is still a value this week against the Packers, with his cost adjusted to match the lower expectations. James Robinson and Myles Gaskin are better plays, but Jones is a decent pivot for diversity or if their ownership levels are too high.