A player’s source of value when drafting in a Best Ball league is derived from their ADP and value over replacement at that position. Most Best Ball drafts include at least 20 rounds of player selections, and the FFPC Main Event involves a 28-round draft. The title of late round sleeper is applicable to almost every player in late rounds because positional value over replacement is diminished. Every year, late round breakouts are the best value picks and help us win championships. That being said, not every dart is worth throwing. Here are a few players the advanced stats and metrics suggest avoiding along with suitable replacement options. The goal is to identify late round fades; if you are interested in some early round traps, then check out this article by Craig Gerein:

Devin Funchess offers near-zero upside in the Green Bay Packers offense. His FFPC ADP sits at 276.5: within the top 300. Funchess enters his age 26 season fresh off a clavicle fracture that limited him to one game in 2019. With Green Bay, he forms a committee at WR2 alongside Allen Lazard and Marquez Valdes-Scantling. He serves no specific role in a run-first offense with an established alpha. His efficiency and productivity metrics in 2018 were deplorable, but he did lead the league in one category: drops. Funchess’ 75.9-percent (No. 90 among qualified wide receivers) True Catch Rate and 13.9-percent (No. 1) Drop Rate do not mix well with Aaron Rodgers‘ well-known lack of tolerance for drops. 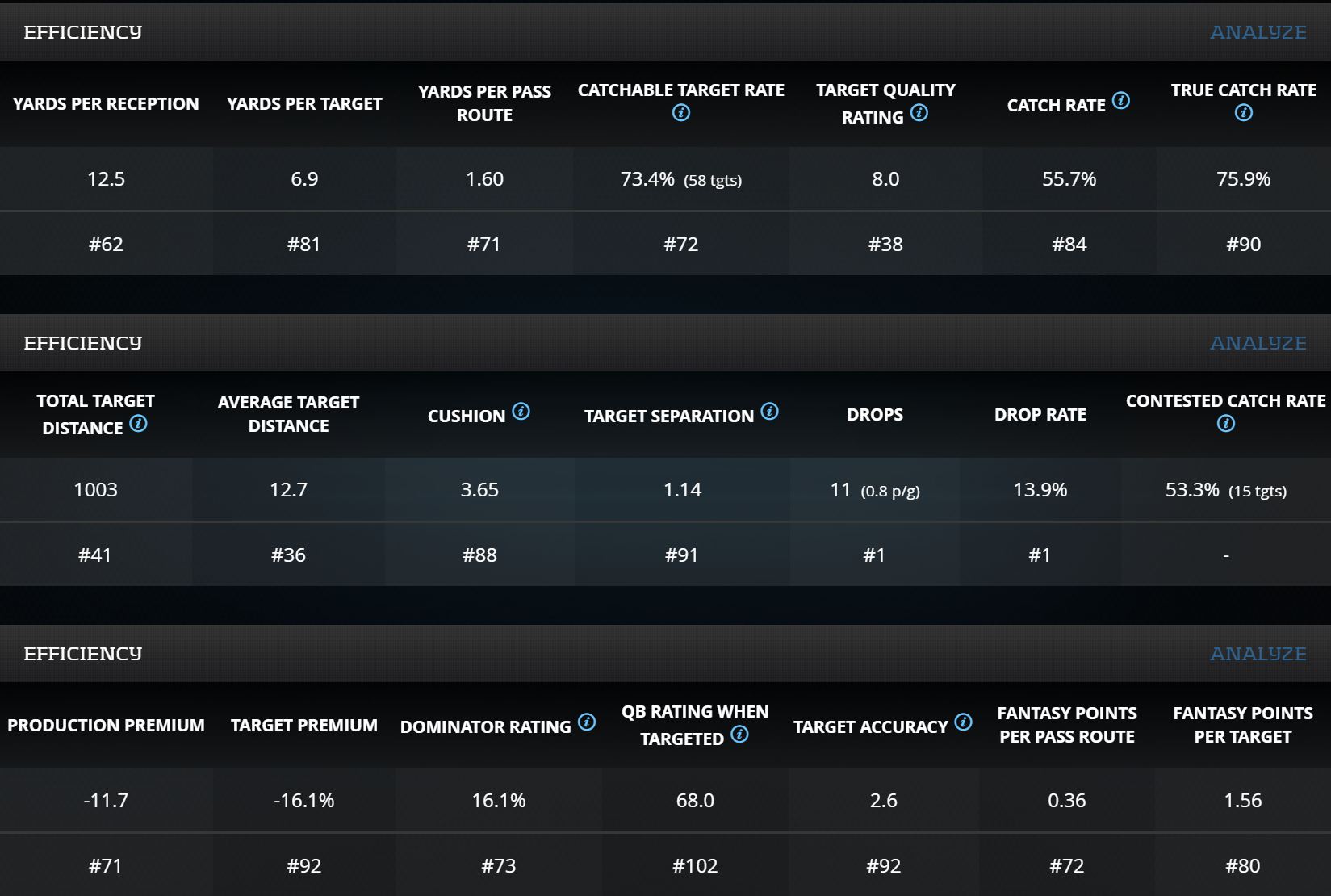 Forget Funchess and instead draft Russell Gage (ADP: 266.13) or a high-upside deep threat such as Andy Isabella (ADP: 301.21). For a full breakdown on Gage’s upside and other late round receivers to target in Best Ball, check out this piece written by Jovani Lore.

Mohamed Sanu is nearly flatlining, and for many good reasons. However, high stakes players have taken it upon themselves to pump the breath of life into his fantasy value. He remains a blip on the fantasy radar with an ADP of 285.67. He is taken before high-upside dart throws such as Andy Isabella and Demarcus Robinson. Sanu enters his age-31 season playing behind target hog Julian Edelman and breakout candidate N’Keal Harry, the No. 3 receiver chair far from promised. He faces competition from Jakobi Meyers, Damiere Byrd, and Marqise Lee. For those who desire a late-round target with a high floor, pass on Sanu and say yes to Adam Humphries (ADP: 326.54).

Sanu has no established floor and no upside. Humphries has little upside, but an established floor. Humphries is two years into a four-year, $36 million contract and the team added no pass catchers of consequence. This makes him a starter with a financial investment that guarantees reps. His role is further solidified by Corey Davis‘ gradual slide out of Tennessee with a declined fifth-year option. Humphries is operating at the Age Apex for receivers (27) and boasted a 90.2-percent (No. 9) True Catch Rate in 2019. Sanu is a wasted pick, whereas Humphries offers tangible value at his ADP.

The Pittsburgh Steelers succeeded this off season in obliterating the role Jaylen Samuels enjoyed in 2019. Samuels failed to capitalize when called upon each time James Conner suffered an injury. He is in a touch squeeze with Benny Snell and fourth-round rookie Anthony McFarland. He faces additional target competition from second-round pick Chase Claypool and free agent addition Eric Ebron. Samuels is no longer a late-round committee receiving back who is an injury away from monster fantasy weeks. Those looking for 2019 Samuels should throw their dart at Dare Ogunbowale (ADP 323.13). Both players served similar roles in 2019, but Ogunbowale maintains a strong position on his roster. Ronald Jones and Ke’Shawn Vaughn are in competition for lead back duties, leaving Ogunbowale in competition with seventh-round rookie Raymond Calais. 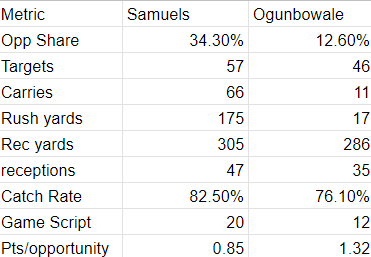 Sameuls and Ogunbowale enjoyed similar 2019 seasons from a receiving standpoint. Samuels did play a significant role in 2019, commanding a much higher Opportunity Share and more total carries. Ogunbowale has more upside at his ADP given their similar recieving production. Samuels was blessed with opportunity in 2019, whereas Ogunbowale’s big break is yet to come. With Ben Roethlisberger back, the Steelers will see more neutral Game Scripts; and with Tom Brady in town, expect more running back passes in Tampa. Neither player offers a high ceiling in fantasy drafts, but if you need running back help late, go Ogunbowale over Samuels.

Late-round dart throws need to be reserved for players with a true path to opportunity and real upside in 2020. Stop wasting late picks on falling players solely on brand value alone. Mohamed Sanu, Jaylen Samuels, and Devin Funchess are names we all recognize, and faces we will recognize at the unemployment office in 2020. Pivot to late-round role players who enter the season with true roles in their offense.