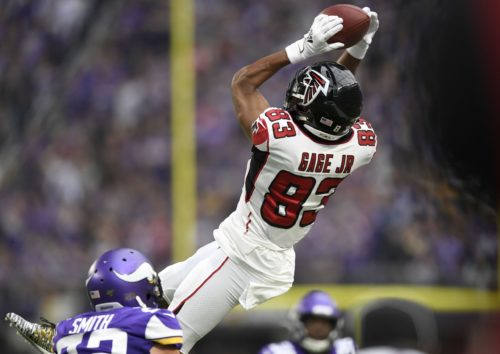 Championship worthy best-ball teams require the perfect blend of safety and upside. Too many high-risk players and your team will struggle to produce on a week-to-week basis. With many fantasy gamers approaching drafts this year with a robust RB approach, being able to identify the late-round wide receivers that can provide stability to your team while also producing boom weeks is crucial. Players who have high Snap Shares on high-volume offenses are great targets to search for late in drafts. Listed below are three players that will have high Snap Shares, and whose advanced stats and metrics suggest that they’ll outperform their current ADP. These late round WRs can keep best-ball squads alive if bitten by the injury bug or when higher upside players strike out for the week.

Russell Gage went from having a 17.9-percent Snap Share in Atlanta’s first seven games to a 62.1-percent Snap Share over the final nine after Mohamed Sanu was traded to the Patriots. In those nine games, Gage averaged five catches, 44.7 yards, and 0.1 touchdowns per game which, over a 16-game stretch, would equate to 80-715-2. That stat line would have given him 163.6 PPR points for the season, putting him at WR39 in between Christian Kirk and Diontae Johnson. Per FantasyPros, his current best-ball ADP is WR84.

Atlanta leads the NFL in Vacated Targets this offseason, with 258 up for grabs. The team brought in Hayden Hurst and Todd Gurley to try and offset the losses of Austin Hooper and Devonta Freeman, but with a shortened offseason and no wide receivers added to the roster, expect Gage’s Target Share to rise. The defense ended last year below average, ranking No. 20 in overall DVOA, and spent free agency scrambling to find replacements for the players they lost. Vic Beasley and Desmond Trufant both walked in free agency and the team reacted with the addition of Dante Fowler and first round draft pick A.J. Terrell. The NFC South is chock full of explosive offenses, and the Falcons will be forced to throw the ball to keep up. Gage will have an enormous opportunity to produce in this pass-heavy offense and should demolish his current ADP.

Steven Sims finished his rookie season at WR66 in PPR scoring, but right now can be obtained for the measly cost of WR87. His 36.8-percent Snap Share ranked No. 152 among qualified wide receivers, but he finished his rookie season strong with a 67.2-percent Snap Share over the last five games. In those five games, he put up a 23-259-4 stat line. He produced fantasy point totals of 15.5 (WR27), 25.3 (WR4), and 18.5 (WR14) in the last three games, proving that he can provide boom weeks.

Washington expects a second-year leap from Dwayne Haskins, and the competition the team added through the draft came in the form of Antonio Gandy-Golden and Antonio Gibson. Gandy-Golden projects to battle with Kelvin Harmon on the outside, while Gibson projects to move around the formation and take snaps from multiple positions. This leaves the starting slot position role to Sims, who averaged 1.90 (No. 10) yards of Target Separation as a rookie. Look for this offense to improve in efficiency, to improve on their 33.1 (No. 28) Team Pass Plays per Game, and for Sims to develop into a safety blanket for Haskins. Buy him now before his price rises.

Now entering his third season, Allen Lazard took a while to get jumpstarted but came alive last year when given his first opportunity in Week 6. He ran eight routes in the game, but still managed to produce a 4-65-1 stat line, showing off his 6-3 frame and 107.9 (87th-percentile) Speed Score on an impressive 35-yard touchdown. With this performance, Lazard propelled himself to the Packer’s No. 2 wide receiver chair for the rest of the year, ending with a 61.0-percent (No. 93) Snap Share in the 11 games he played.

Finishing the season with the second-most receiving yards on the team despite not playing until Week 6 is an amazing accomplishment. Even more impressive are the 1.71 (No. 26) yards of Target Separation and 1.98 (No. 26) Fantasy Points per Target that Lazard posted. These abilities create a nice floor, but he also demonstrated his 125.6 (74th-percentile) Burst Score by posting weeks with 16.5 (WR16), 19.3 (WR12), and 16.9 (WR19) fantasy points. The Packers went into the offseason with a razor thin receiving corps and managed to leave the deepest wide receiver draft in recent memory without drafting a single one, ensuring Lazard’s starting role. Considering his athletic profile and efficiency metrics from last year, you should be hoarding him at his current best-ball price of WR62.