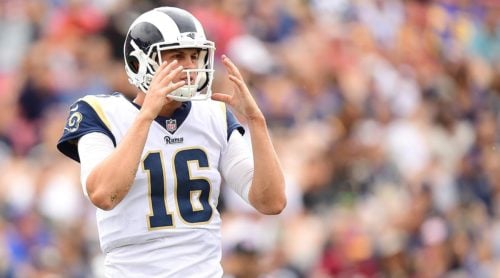 Jared Goff completely fell apart against the San Francisco 49ers in Week 6, but it was not just a matchup-based collapse. Based on the advanced metrics and data at PlayerProfiler, it’s easy to differentiate between on-brand performances like Goff’s or outlier performances like Cooper Kupp‘s. Should we fade busts like Goff for good, steal them from opponents or play them for bounce-back weeks? PlayerProfiler’s advanced stats and metrics can help us figure out who to sell low and who to buy high.

Awful. Goff-ful. Jared Goff was so bad against the 49ers that he couldn’t even outscore backup quarterback Taysom Hill, who put up 1.7 fantasy points against Jacksonville.

In Week 6, the Tennessee Titans benched Marcus Mariota and officially made Ryan Tannehill their  Week 7 starter. 2019 is the final year of Mariota’s contract.

The mustache let everyone down. After scoring at least 16 points in each game, Gardner Minshew put up a Week 6 dud.

However, based on his +17.7 (No. 8) Production Premium, 7.4 (No. 9) Adjusted Yards-Per-Attempt and 125 (No. 8) rushing yards, Minshew Mania will return. It’s important to remember four points in regards to Minshew:

Smith-Schuster is a matchup dependent WR2 until further notice.

When Jared Goff imploded, he took Cooper Kupp with him. Even though Kupp is third in targets (69), third in receptions (45) and fifth in receiving yards (523), he finished with four receptions for 17 yards against the 49ers.

Keenan Allen has posted less than six points in back to back weeks. Moreover, he’s only garnered six targets in each of his last three games.

What’s mind-boggling is that Philip Rivers has six more attempts in Week 4-6 than in Weeks 1-3. With Hunter Henry, Gordon and a healthy Mike Williams back into the mix, Allen is losing targets.

Unfortunately, the Los Angeles Chargers face the Titans, Bears and Packers in their next three games. Allen is a hold for fantasy gamers and a buy-low before his Week 10 matchup against the Raiders.

Denver had one plan in mind against the Titans: stop Derrick Henry and make Marcus Mariota throw. On 15 carries and three targets, Henry mustered 33 yards and 4.3 points. His 44.6 (No. 55) Run Blocking Efficiency Rating and 36.3-percent (No. 3) Stacked Carry Rate aren’t doing anything for him. Additionally, Tennessee’s 2.86 (No. 22) Game Script isn’t ideal for a grinder.

While it’s unknown whether Ryan Tannehill will fare better than Mariota, it’s at least a chance for improvement. With 86.6 (No. 15) Weighted Opportunities and six (No. 4) breakaway runs, Henry is still a viable option.

Is Aaron Jones the rebirth of Jonas Gray? Because they are the only running backs in recent memory to fall hard after rushing for four touchdowns the week prior.

What on Earth does Jones do to have such little trust from coaches? He’s 12th in Production Premium, fifth in Dominator Rating and 10th in Evaded Tackles on PlayerProfiler.com. Even with that, Packers coaches continue to turn to Jamaal Williams. The lack of trust in Aaron Jones gives him a 16.0 (No. 1) Weekly Volatility mark, and it’s why he’s the ultimate boom/bust running back.

Honestly, there weren’t many tight end busts this week. Outside of the top tight options (Travis Kelce, George Kittle, Zach Ertz, Austin Hooper, Mark Andrews, Greg Olsen), the rest of the bunch are always a dart throw. That makes Ertz and Kelce the “busts” of Week 6. Not because they fell off a cliff, but because they weren’t top-five options.

While Dallas Goedert‘s emergence is cautionary for Ertz, Kelce is a buy-low option based on his Expected Touch Downs and Expected Fantasy Points Per Game: