Ezekiel Elliott and the Fallacy of the Buy Low Running Back 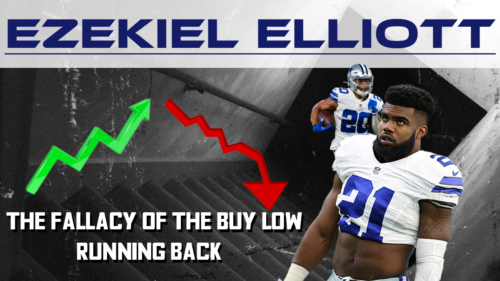 We have heard this adage so many times playing fantasy football that I can’t blame anyone for thinking it makes sense.

In investing, it’s straightforward: buy a stock at a price lower than its projected value, sell when the stock rises, and secure the profit. The difference between stocks and football players is the finite nature of their value.

Thus, I have a different mindset when it comes to dynasty.

Even blue chip dynasty assets decline, and eventually retire. The value of aging players is forced downward by the market in anticipation of their diminished value. This is especially true for running backs who reach their age apex four to five years into their career.

As I wrote in my debut article for PlayerProfiler, you should prioritize ‘buying high’ on athletic, young, stud running backs.

Nonetheless, you’ll find countless articles from #BigFantasy proclaiming running backs at age 25 or older as ‘buy lows,’ and imploring us to sell the hype on young studs such as Jonathan Taylor or D’Andre Swift.

I understand the theory of this article but respectfully disagree.

This is symptomatic of a misunderstanding of how to maximize value in the dynasty market.

While these are all young players – this is actually a better list of sells for rebuilders than contenders (cont.) https://t.co/uWde4NqqOu

In 2021, nobody better exemplifies the fallacy of the ‘buy low running back’ than Ezekiel Elliott.

‘Buy Low’ Does Not Mean What You Think It Means

If you are considering ‘buying low’ on Ezekiel Elliott, you should realize what this means for your team. If you plan to flip him for profit next year, expect to be disappointed. In 2020, Elliott’s 2016 draft class contemporary, Derrick Henry, rushed for 2,027 yards and 17 touchdowns, finishing as the overall RB3. After one of the most superlative running back seasons in league history, his dynasty ADP rose just one spot, from RB13 to RB12.

Elliott – drafted RB10 – has never amassed as many fantasy points in a season as Henry scored last year. Any expectation that his market value will increase after a big year is misconceived. In fact, the Henry corollary suggests he will require a top five finish just to hold his current value as he transitions from his age 26 to age 27 season in 2021-22.

The buy low veteran running back, contrary to the term, is not about market value. It is about production.

Theoretically buying an age-apex running back such as Elliott is a pathway to elite 2021 production at a discounted cost. This is a short-term maneuver with high risk, but potentially championship-winning reward. Will Elliott provide that?

I am often reprimanded for my ‘ageist’ rank on the likes of Derrick Henry, Dalvin Cook, and Aaron Jones (both my personal ranks and PlayerProfiler’s are below ADP on all three). I accept this consequence of my prioritization of value-accruing players, but respect the talent of the aforementioned studs. Ezekiel Elliott is a different case. Elliott has been a fantasy stud since entering the league, but his performance slipped badly in 2020. The Cowboys star fell to RB14 in Fantasy Points Per Game, and fell short of expectations beyond fantasy. Using PlayerProfiler’s advanced analytics, one would realize he had an average 23.3-percent (No. 23) Juke Rate, but ranked outside the top 50 qualified running backs in True Yards Per Carry, and outside the top 40 in both Yards Created Per Touch and Breakaway Run Rate.

Further context does not improve the picture. David Zach annually charts Rush Yards Created Over Rxpectation (RYOE), accounting for offensive line play, stacked box rates, and yards created both before and after contact. Elliott grades out as one of the least effective rushers in the league.

In what has become a staple for measuring RB performance, this adjusts YPC for O-line blocking, % carries vs 8+ front, yards before/after contact, etc.

I will concede there a variety of RYOE models, and not all pain Elliott’s performance as this abject. But even in the most generous model, he does not profile as an elite running back in the backend of his prime. Compare him to the aforementioned Cook, Henry or Jones, who rank within the top five in RYOE. Elliott is a once-great talent in the midst of decline.

Ezekiel Elliott‘s backers insist his downturn in 2020 was not indicative of talent. Instead, his depressed efficiency was a result of the season-ending injury to Dak Prescott and the disintegration of his offensive line. If we project forward from Elliot’s fantasy pace from early 2020, he may bounce back (bounce-Dak?) to the elite tier when re-united with a healthy Dallas offence. Unfortunately, this defense has more glaring holes than the Cowboys secondary. To begin with, in 2019, Elliott had already become an inefficient running back. The table below shows his efficiency in 2019 vs. 2020 using PlayerProfiler data. He has since lost explosiveness, but was already creating yardage at a sub-par rate.

Elliott also was among the worst in David Zach‘s 2019 RYOE grade. He was one of only four running backs to finish below -0.20 RYOE per attempt in both years alongside Frank Gore, Todd Gurley and Peyton Barber.

The purpose of this process was to see if we can measure each RB’s ability to create on their own. As such, it was adjusted for O-line blocking, % vs stacked fronts, yards before/after contact, etc.

Not the kind of company you want your RB1 to keep.

I will acknowledge there is a more optimistic interpretation of my case thus far.

“Hey nerd, if Ezekiel Elliott was inefficient in 2019, but was still an elite fantasy back, why should I care about your stupid stats?”

If he receives the volume he did in 2019, you shouldn’t care about my stats. However, the market is too confident of this outcome. Only three highly relevant fantasy backs were under water in David Zach‘s yards created over expectation in 2020: Elliott, Josh Jacobs, and Joe Mixon. The market has cooled considerably on the later two (RB16 and RB20), yet Elliott remains top 10. However, unlike the Raiders or Bengals, the Cowboys have another running back on their roster with potential to flourish in the lead back role. This adds an element of downside risk that Elliott’s price does not reflect.

Tony Pollard: The Best Running Back in Dallas?

If the supporting cast prevented Cowboys running backs from succeeding in 2021, someone forgot to tell Tony Pollard. Per PlayerProfiler’s analytics, he grades out as the far superior and more explosive running back.

Taking Zeke round 1 is betting on bad coaching

The question remains: will any of this matter if volume remains in Ezekiel Elliott‘s corner?

Pollards In The Mirror May Be Closer Than They Appear.

In his 2019 rookie season, the former Memphis product saw 40-percent of the snaps in two games; both massive Cowboys blowouts. For the first seven weeks of 2020, Pollard did not crack this threshold. In his next four games, he converted 25 rush attempts into 169 yards and a touchdown (6.8 YPC). Meanwhile, Elliott converted 68 rushes 249 yards and a touchdown (3.7 YPC). To close the year, Pollard saw 40-percent of snaps or more in each of the last five games, including one spot-start in which he posted 132 yards and two touchdowns on 18 touches. He was the week’s fantasy RB1.

Is it more likely the Cowboys – who remained in playoff contention until Week 17 – were resting Elliott to preserve him for 2021? Or that Pollard earned more playing time by outperforming the starter?

The Best “backup” in the NFL ? pic.twitter.com/5apXP5LfKa

The highly athletic Pollard has sufficient size and a receiving background. It is at least within the range of outcomes he asserts himself as a true ‘1B’ in a committee backfield.

The case for Ezekiel Elliott has been divorced from the football field. Elliott backers who admit his talent deficiency are relying on a team playing an inferior player more than they did last year. This theory is often supported by Elliott’s contract and the supposed stubbornness of Jerry Jones. Contract worshippers must forget how quickly Todd Gurley‘s four-year, $60 million contract was brushed aside when his role was reduced in 2019 before being cut in 2020 costing $20.15 million in dead cap. They must forget Le’Veon Bell was released 19 months after inking a four-year, $52 million deal, or that David Johnson was benched for Kenyan Drake in the first year of a three-year, $39 million contract before being traded in the offseason.

All players at all positions must earn the right to remain on the field. Star running backs are no different. I am not predicting Elliott’s release, but if he continues to be out-played by Tony Pollard, no one should be surprised if Pollard’s touches increase and Elliott is no longer a fantasy RB1.

Over his last four starts of 2020, Ezekiel Elliott averaged just 59-percent of the team’s snaps. If that holds or improves, he will still provide fantasy value as the primary option in a high scoring offence. But reduce his once-dominant volume and he profiles closer to Clyde Edwards-Helaire, Chris Carson, or Mike Davis in 2021. He would be a third round player at a first round redraft ADP. In dynasty, If I am ‘buying low,’ I prefer options such as Edwards-Helaire or Miles Sanders. Both carry lower ADPs and remain on their rookie contracts. It is easier to imagine these players with increased market value next offseason.

Is Ezekiel Elliott still a Top-10 Running Back in Dynasty? ? pic.twitter.com/3uts5UnbOD

If I am looking for discounted production, I concede Elliott retains top five upside in 2021 if handed the workhorse role. However, I would prefer any of Aaron Jones, Austin Ekeler, or Derrick Henry. All of whom are more efficient, carry less risk, and are cheaper to acquire.

Buying low on Ezekiel Elliott is not analogous to investing in an undervalued stock. Instead, you are buying an overvalued stock, and assuming others will make suboptimal valuations allowing the stock to rise anyhow. If this is how you wish to play dynasty, I encourage you to place your entry fees on Tesla instead.