Running Back Does Matter… In your Dynasty League 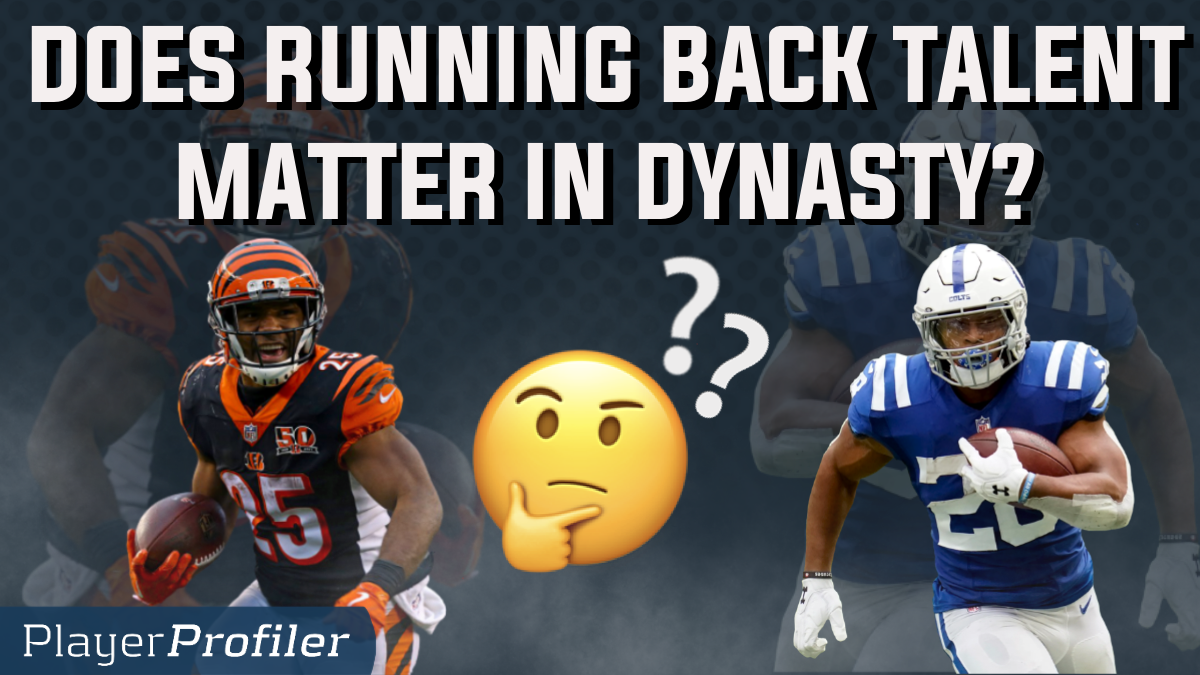 If you’re a data-inclined football fan, you’ve surely seen this phrase spattered across your timeline. You may have uttered it yourself. For dynasty players, running back is the grand paradox. One experiences cognitive dissonance when the position they decree ‘does not matter’ is most important to winning a fantasy league.

Today, we use PlayerProfiler’s advanced stats and metrics to cure the dissonance. The ‘running backs don’t matter’ (RBDM) thesis states rushing offenses are highly dependent on scheme and line play. Thus, running back talent matters only on the margins. I fear many misapply this real life football lesson to their dynasty leagues.

Dynasty Players Value Situation Above Talent at Running Back

I asked on Twitter what factor mattered most to folks when acquiring a dynasty RB1. The results were clear. Almost half the respondents chose projected workload, while over two-thirds emphasized situational metrics over talent.

Ok twitter. Help me out for my next article by answering honestly

What do you care the most about in a dynasty RB1 you’re acquiring?

The shorter the performance window, the more weight should be applied to projected workload and offensive situation. Mike Davis, Jamaal Williams, and Giovani Bernard were smash plays in daily fantasy for this reason. As discussed earlier, running backs are dependent on external elements to be successful. We should examine their production more skeptically than wide receivers, who compete with teammates for touches on each play. A running back guaranteed a workhorse role in a good offense rarely fails.

In the long run however, does talent eventually rise to the top? Weeks before the above poll, I made such an argument.

🚨Running Backs: Do they matter?🚨

Yes and No: A thread 🧵 pic.twitter.com/roMErcLFDD

‘Running Backs Don’t Matter’ Does Not Apply To Fantasy

Those preaching RBDM ought to be most aggressive in acquiring truly elite running backs. RBDM stipulates RB production does not necessarily equate to talent, making the position replaceable. Investing significant capital in a top back who vanishes from utility is catastrophic to a dynasty team. Thus, RBDM proponents should run away from mediocre rushers who succeeded due to sheer volume. The few safe havens set to produce at an elite level for years to come should be coveted.

I decided to dive into the data to find out whether I was crazy, or if running back evaluations – isolated from situational influence – can predict dynasty success. To do this, I used an approach even more simplistic than the box score scouters and head coach mind-readers employ. I charted every RB who was drafted within the top 12 per Dynasty League Football since they began tracking in 2014. I inputted their Speed Score, Burst Score and College Target Share. 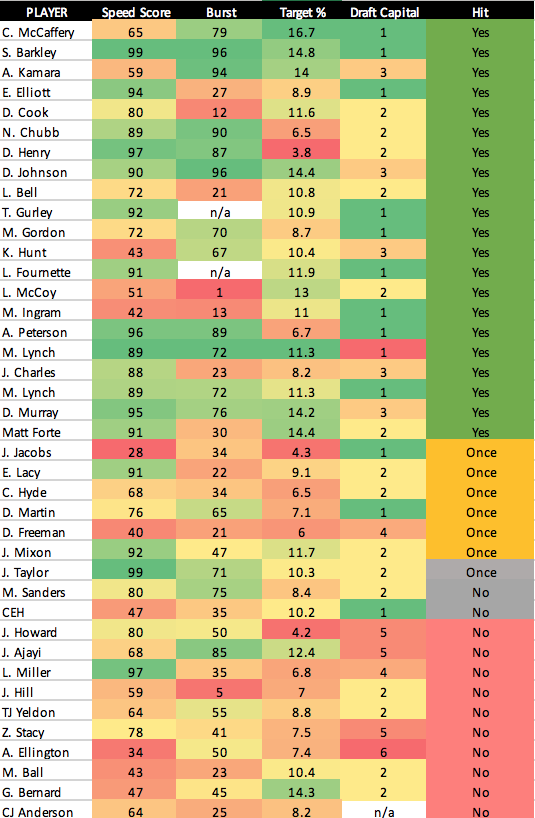 Players who produced two or more RB1 seasons after being drafted as an RB1 were labeled hits. Of the 40 individual rushers, 22 qualified. Ten players never posted an RB1 season from that point, six posted one such campaign, and three – Jonathan Taylor, Miles Sanders, and Clyde Edwards-Helaire – were marked pending, though Taylor already has one hit.

Are You Athletic? Do You Catch Passes? Welcome to the Team

Among the hits, a trend emerged in that 68-percent had a Speed Score in the 80th-percentile or higher. Of those who did not, four of seven posted well above average Burst Scores, and six had a College Target Share at or above 10.0-percent. The only successful back who did not boast an 80th-percentile Speed Score or 10.0-percent Target Share is Melvin Gordon. He developed into an effective pass catcher in the pros, averaging 49.7 catches per year in his three RB1 campaigns and never falling below 32 receptions in an NFL season.

In the whole sample, only two players who boasted a Speed Score in the 80th-plus percentile with above average burst failed to hit RB1 status twice. These players are Jonathan Taylor, a heavy favorite to join the ‘green’ group next year, and the 23-year old Miles Sanders.

This presents an apparent cheat code to avoid running back landmines. When assessing which RB1 to buy high on, those with elite size-adjusted athleticism are nearly a lock to be an RB1 for multiple seasons. If a back lacks elite athleticism, they must be a top-tier pass catcher to have any chance at success .

The more we look, the more amazed we will be at how simple it is to identify which running backs we can trust. The average and median (from left to right on the chart) size-adjusted speed, burst, and Target Shares are demonstrably higher among the hits than the misses or those who only hit once. 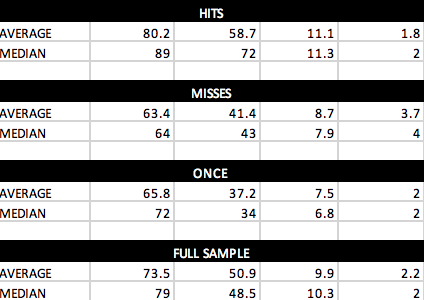 The correlation is magnified when examining success rate for players based on each metric. I used an 80th-percentile threshold for Speed Score, 67th-percentile for Burst Score because the burst average was much lower in the sample, and 10.0-percent for College Target Share. 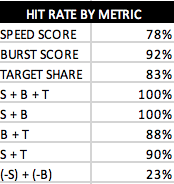 While the overall hit rate excluding ‘pending’ players is 55-percent, the hit rate with any of the metrics discussed is considerably higher. Players with elite speed and burst were 100-percent successful, while those with neither had their success rate chopped by over half the sample wide rate.

There is assuredly more to running back talent than athleticism, but after reading this article you’d hope more than a paltry 22-percent of dynasty players put it at the forefront of their analysis.

What Should We Expect From Today’s Running Backs?

Running back talent has surged recently. The 2017 and 2020 draft classes gave rise to an RB renaissance. It’s on dynasty leaguers to make shrewd decisions on which current RB1s and emerging talents to place their chips on moving forward.

New additions to the Dynasty RB1 ranks at DLF are Cam Akers, D’Andre Swift and J.K. Dobbins. All three present solid bets to prove their worth, with Swift hitting all three thresholds. Dobbins is the most uncertain with no recorded athletic testing at the Combine and a 7.6-percent (56th-percentile among qualified running backs) College Target Share. However, if reports are to be believed, he shattered both athletic thresholds out of high school, and the Dobbins viewing experience suggests he is an athletic specimen. Akers hits the Speed Score and Target Share thresholds and falls barely short on burst, profiling to be a rock solid bet.

Cam Akers is officially a Top-8 running back on Dynasty Deluxe: pic.twitter.com/5vFKWFvZGa

I would target Sanders or Gibson in trades for Josh Jacobs, and would sell David Montgomery in exchange for Dillon and a draft pick. Both Jacobs and Montgomery missed all three thresholds and project to disappoint. Because PlayerProfiler’s obsessive focus on the right details comes from the top, it’s no surprise that both players were included among the Sonic Truth Dynasty Podcast’s sell candidates. To quote The Podfather:

If you Want to Win your Dynasty League: Running Backs Matter

Fantasy football is not always hard. Even this highly simplified evaluation of running back ability uncovered thresholds highly correlated to fantasy success. Following this approach when deciding which rushers to make cornerstones of your dynasty team will yield far better results than playing fortune teller to guess at workload distribution or offensive effectiveness.

This offseason will be another roller coaster, so I encourage you to step off and keep it simple. Running back talent may not equate to winning in the NFL. But if you want to win your dynasty league, it ought to matter to you.