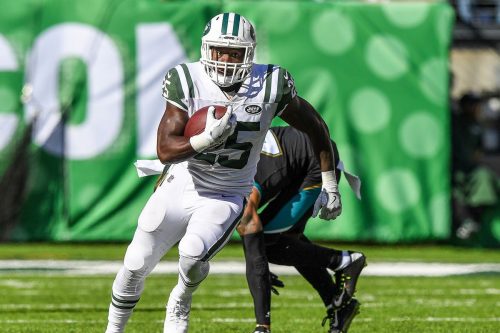 We’ve said it before, but it bears repeating. Stashing the right player at the end of your bench can be the difference between sinking and swimming when it comes to traversing the terrains of injuries and bye weeks with advanced stats, metrics, and analytics. If you pay enough attention to the right sorts of details, these players become easier to spot. Cameron Meredith benefits from playing in the Saints offense. But when the Saints began running fewer three-receiver sets upon Mark Ingram‘s return, Meredith became a drop candidate. Navigating the next few weeks will be harder if you’ve been keeping him over some of the other receivers touched on in the week 7 version of Tomorrow’s Newspaper.

Of all the long-term plays touched on in the aforementioned piece, the best was D.J. Moore. Though he needed a Torrey Smith injury to break out, there were enough positive indicators in his favor. Among them are his first-round draft status, positive efficiency metrics in a small sample and a favorable rest of season schedule. Moore became a must-stash once Cam Newton emerged as fantasy football’s preeminent buy-low-ish candidate. Those who have been patient with him have been rewarded with a plug-and-play WR3 in the best match-up imaginable against Tampa’s beleaguered secondary. With a fantasy playoff schedule that includes the Browns, Saints and Falcons, he’s trending towards becoming a league-winner.

With all the other rookie QBs starting games this season, it’s fair to wonder when Lamar Jackson will see his turn. Joe Flacco is running out of chances to hold him off. Despite his weapons affording him the league’s top average target separation, his efficiency has been poor in spite of positive counting stats. This week’s match-up against the Steelers offers Flacco one last chance to impress before Baltimore’s bye. Jackson should be stashed now in the event that Flacco craters on Sunday and is replaced during the off week.

The Ravens offense looks and feels different when Lamar Jackson is under center. Though he ranks 13th in QB rush attempts with 23, his 129 rushing yards ranks eighth at the position. He offers a dual-threat dimension to the offense that Joe Flacco could only dream of contributing. And his presence under center opens up opportunities for his teammates, as we saw last week when he was under center for an Alex Collins touchdown. If he has enough accuracy to take advantage of a weapon like John Brown, it could lead to a fantasy fireworks show in the second half of the season.

Certain players have a certain way of resonating with the RotoUnderworld unlike any others. Spencer Ware is most certainly an outlier when it comes to the players we typically like to target as bench stashes. He’s a player who, despite an underwhelming college resume, has gotten the absolute most out of his relatively limited athletic ability. He’s also a player who, before tearing his PCL last preseason, was slated to begin the year as Kansas City’s starter. This a year after finishing 16th among RBs in Fantasy Points per Game.

In an alternate universe, we could be living in a world where Spencer Ware is the starter and early-down pounder for the Patrick Mahomes-led Chiefs with Kareem Hunt as the change-of-pace satellite back. That said, we’re not stashing Ware in the hopes that there’s a chance he wins his job back. We’re stashing Ware because Kansas City’s offense is one of the best in the league and we want all the pieces of those offenses. They’re good enough to reach a point where they can lean on Ware in the second half of a blowout win. And unlike a lot of backup RBs across the league, we already know that he can succeed if given the chance to start again.

Elijah McGuire should’ve already been stashed on your roster. He should’ve been added where possible two weeks ago when he returned to practice, before he was activated from IR. His return coincided with Bilal Powell‘s season-ending neck injury. And with Isaiah Crowell offering next to nothing in the passing game, McGuire will return value right away. While Trenton Cannon has filled in admirably, he wasn’t the one threatening Powell’s role before the season began.

Elijah McGuire‘s best comparable player on Player Profiler is Charles Sims. As an original Charles Sims truther, I’m obligated to say (and believe) that this is a good thing. McGuire’s 11.82 (11th-percentile) Agility Score is poor for any player, much less a 214-pound running back. The more important number is his 15.4-percent (93rd-percentile) College Target Share. While Trenton Cannon has a superior Agility Score, he topped out at 21 receptions in a college season. The fewest number of receptions McGuire ever recorded in a college season was 22. If Cannon could turn nine targets over the last two weeks into 16.5 fantasy points, imagine what McGuire could do as the primary pass-catching back for the oft-trailing Jets.

The Broncos trading Demaryius Thomas didn’t exactly send shockwaves through the NFL for those who have been paying attention. Regardless, the Denver passing game is going to look a lot different without him. The biggest and most obvious beneficiary is Courtland Sutton, who should already be rostered. And if he hadn’t sprained his MCL, this section of the article would belong to Daesean Hamilton. The next man up is Tim Patrick, who is intriguing in his own right.

Tim Patrick may not be as explosive an athlete as Demaryius Thomas was in his prime. But he is a good enough athlete to offer considerable upside as a starter in three-receiver sets. He’s seeing higher Snap Shares and running more routes as the weeks progress. He scored a 24-yard TD last week, and projects to draw the beatable coverage of Shareece Wright this week. He’s not the sexiest name to stash, but I always take notice when an undrafted free agent who records positive efficiency in small samples sees his role expand.

Demaryius Thomas becoming a Houston Texan would be a lot more exciting if he hadn’t spent the last few years battling drops, gross inefficiency and a steady decline in his play. Though with Will Fuller lost for the season with a torn ACL, you can see why the win-now Texans made the move. If Deshaun Watson has proven anything, it’s that he’s willing to take enough chances to remain a fantasy QB1. As a result, it makes sense to stash players on this Texans team that stand to see opportunity boosts. Keke Coutee being ruled out for Week 9 opens the door for Vyncint Smith to become a thing.

Vyncint Smith has the athletic profile of a discount Robby Anderson. That player paired with a gunslinger like Deshaun Watson could make for a great fantasy football tag team over the second half of the year. Especially given the real possibilities that Keke Coutee‘s balky hamstring continues to be an issue and/or Demaryius Thomas continues to battle drops and inefficiency. Smith’s best comparable player is Kenny Bell, who we promise is a real player, and he’s an undrafted free agent from Limestone, which we promise is a real school. But his combination of opportunity, skill-set and QB make him an intriguing stash if he can produce a fantasy-usable week before Houston’s bye.

In the event that Vyncint Smith doesn’t fire, or you need more TEs and fewer WRs, Ryan Griffin makes for a great stash. A lot of the same reasons for stashing Smith apply for Griffin as well. Mainly the loss of Will Fuller combined with Deshaun Watson‘s general recklessness and Keke Coutee‘s balky hamstring. Unlike Smith, Griffin is a proven performer in this offense. And while Griffin has been out for the last two weeks with a back injury, rookie Jordan Thomas‘ production showed that the tight end (no matter which one is playing) is going to be a big part of the offense.

Ryan Griffin embodies what we like to look for in tight end and general fantasy football targets. He checks the boxes of size, speed and weight-adjusted agility, evidenced by an 11.44 (67th percentile) Agility Score. All while having spent his career over-performing his less-than-stellar athleticism. If anything, he makes for a fine waiver replacement for Travis Kelce owners who will need a fill-in for Week 12. And as we’ve seen in the past, he has the potential to become a lot more than that for your fantasy squads.