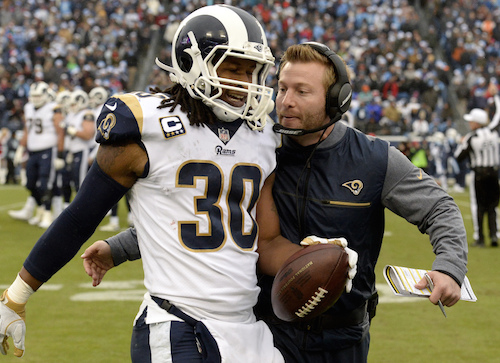 It’s hard to overstate the impact of Sean McVay’s offensive system. Taking recent league-wide trends to the extreme, the 2017 Rams were akin to the Houston Rockets in the NBA, almost single-mindedly chasing high-efficiency decisions. They famously got to the line before the quarterback communicator shut off to allow for more dynamic play-calling; their ability to win in numerous ways and willingness to mechanically take what defenses allowed consistently put players in the best possible situations to succeed.

Consider Todd Gurley. After a punchless 1,200 total yards in 2016 that featured terrible efficiency, spotty passing game involvement, and few high-value touches (owing in large part to a terrible offense around him), Gurley hit nearly 2,100 total yards in 2017, catching 21 more passes for more than double his 2016 receiving yardage output and jumping his total touchdowns from 6 to 19. His yards per carry increased from 3.2 to 4.7, in no small part because he ran against light fronts 73.8% of the time, an absurd rate for a high-volume back (and way up from 44.6% in 2016). None of the other 25 RBs with at least 175 attempts faced a light front on even 50% of their runs.

Some of that is due to the Rams running the league’s favored personnel grouping, “11,” on a league-high 81% of snaps (per Sharp Football). That three-WR set spreads things out and forces more defensive backs onto the field, which in turn creates better running opportunities. But 59% of all 2017 plays were run in 11 personnel, so the Rams were hardly the only team featuring it. Meanwhile, the Rams also led the league in game script with an average margin of +6.39; they were in plenty of obvious run situations, which makes the degree of Gurley’s light-box ratio all the more astounding. In raw terms, he had 58 more light box rush attempts than any other back, and only two (Le’Veon Bell, Kareem Hunt) were within 100 of his 206 carries against these fronts. This was no outlier – this was a commitment to the ideal that passing sets up the run in the modern game and carries should be almost universally dictated by box advantage.

Apart from capturing an efficiency boost for his 279-carry star RB usually reserved for the most extreme passing-down specialists, McVay’s passing game was also the picture of efficiency. After a putrid 5.3 AYA in his rookie season, Jared Goff led the league with an 8.0 mark. The offense rarely forced things, instead spreading the ball around without discretion; the three starting WRs plus Gurley all finished between 70 and 94 targets, while the top two TEs combined for 77. This is slightly misleading considering Robert Woods missed four games, but controlling for missed time while incorporating air yards with a metric like Josh Hermsmeyer’s Weighted Opportunity Rating (WOPR) shows the value of the targets each WR saw was relatively similar – Woods led at 0.53, Cooper Kupp posted 0.44, and the now-departed Sammy Watkins finished at 0.40 thanks to his team-leading 14.4 aDOT.

Each of the three WRs had a Production Premium among the top 20 at the position, with Watkins a surprise on that list because of how notably inefficient he was in traditional terms. He and Goff were never quite on the same page as a full 35.7-percent of Watkins’ targets were deemed uncatchable. It’s no surprise then, given how they played during the season, the Rams sought to patch that inefficiency over the offseason.

There are positive indicators underwriting Gurley’s massive 2017 turnaround, but he also blew away the league’s RBs in areas where a repeat performance in 2018 might be difficult, and they open the question of whether a back with a history of knee issues is worth the first overall fantasy pick.

Gurley’s rate of light box attempts might have been even more dramatic if not for a league-leading 22 carries inside the 5-yard line, four more than any other back. He scored on 10 of those attempts, accounting for more than half of his total TDs, while no other team had more than 12 such rushing scores. He’s as safe a bet for goal-line touches as there is — all other Rams combined for just two rush attempts in that area of the field — but the Rams ran the sixth-most plays from scrimmage inside the 5 and Gurley’s conversion rate was fantastic.

In the pass game, Gurley’s 12.3 yards per reception led the 17 backs with at least 40 catches, pacing fellow efficiency superstar Alvin Kamara — the only other back in double figures — by a full 2.2 yards per. Maintaining a WR’s YPR on a 1.1 average target distance — 749 of Gurley’s 788 receiving yards were racked up after the catch — will be difficult. He also led all backs with six receiving scores.

The Rams used Gurley creatively in the passing game much like on the ground, and there aren’t glaring signals why he can’t be immensely productive again. It’s possible and perhaps probable he matches some of his otherworldly 2017 rates. But apart from the valuable workload, his efficiency was off the charts in almost every facet of the game (which is of course true for any player who finishes as the top overall fantasy scorer). It’s easy to project Gurley for a huge opportunity share in 2018, and McVay’s ability to put him in positions to succeed is obvious, but efficiency regression in some areas has to be the expectation. In a range, his 2017 results are an upper 5-percent outcome for 2018.

The pressing question is how much defenses can and will adjust to the Rams’ offense. It seems a given teams will try more defensive shifts late in the play clock, after the comms have shut off, though they can’t substitute at that point. Routine safety blitzes or other post-snap deviations from alignment are an option to combat the ratio of light boxes the Rams run against, but would make defenses more susceptible to the play-action passing game, which would just create a bigger problem. It seems likely Gurley will continue to reap the rewards of what appears to be a deliberate attempt to put the running game in positions to succeed. The Rams also return all five starting offensive linemen from a group that rated third in run blocking.

The passing game is another question, and identifying potential defensive adjustments is more complicated. It’s probably unrealistic to expect Goff to repeat as the league-leader in AYA, and yet there is still some room for improvement. Any lost efficiency from, say, his targets to Gurley, could potentially be made up if new addition Brandin Cooks fits into the offense better than Watkins did.

This is a highly-concentrated offense — the top three WRs all played between 75-percent and 85-percent snap shares, while Gurley was one of three backs in the NFL over 80-percent — that will lean on their preferred three-WR personnel. And McVay’s results in year one have probably earned him some benefit of the doubt in terms of his ability to prepare for potential defensive adjustments in his second offseason. We might even see other offenses around the league implement McVay’s hurry-to-the-line approach, although the element of the Rams’ success that can be attributed to McVay’s reported virtuosity calling plays will be harder to replicate.

Cooks is a pretty direct replacement for Sammy Watkins from a projection standpoint, as his 14.2 average target distance over the past two seasons indicates. Expect Woods and Kupp to play similar roles, with 10.2 and 8.6 yards of average target depth, respectively. The biggest threat to their production is if Cooks thrives in the downfield role in a way Watkins didn’t, though the circumstances that led to Woods’ breakout year haven’t changed much. A positive note for Kupp was his red zone usage, where his share of targets jumped to 29.5-percent (eighth highest among WRs) from a 19.7% share overall. He wound up with the worst touchdown rate among the Rams’ big four receiving options, something we could see shift in 2018.

It’s hard to see the TE position producing much in the way of fantasy relevance when nothing came from Tyler Higbee or Gerald Everett in the highly-efficient 2017 season. Higbee dominated snaps, but the target split was closer and the two combine to be the fifth option in this offense.

Parsing where the production will come from beyond Gurley is a challenge, but we know McVay and the Rams will seek to exploit the edges presented in the modern game. That should help mitigate any efficiency regression, and while it might be maddening on a week-to-week basis to own any of the WRs, getting a piece of a highly-concentrated and productive offense is rarely a losing bet, so long as it isn’t too pricey to make.