Tomorrow’s Newspaper: Darius Jackson and Waiver Wire Prescience for Week 16 and Beyond 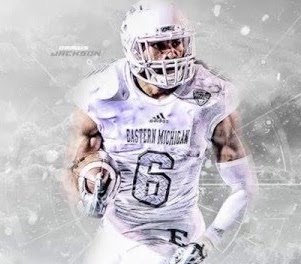 For those of us who play in dynasty leagues and have already been eliminated from the playoffs, now is an ideal time to begin looking ahead to next season when it comes to stashing players.  Even in the deepest of leagues, there’s always likely to be at least a few lottery ticket-types of players floating around waivers.  There’s zero downside to making these moves now since we don’t have to worry about whether these guys are going to put up any sorts of numbers for the rest of the year.  And if their respective teams make high profile moves in the draft or free agency that block their paths to playing time, you can feel free to cut them since they were acquired for free anyway.  But given the number of players who have received opportunities to produce this season because of injuries to players ahead of them on the depth chart, you may want to hold onto these guys either way.

With Ezekiel Elliott being the fourth pick of the 2016 NFL Draft, the road to the top of the Dallas Cowboys RB depth chart was always going to be a long one for Darius Jackson.  After being waived to make room for the return of Darren McFadden, Jackson will receive a fresh start in Cleveland after the Browns claimed him off waivers.  While he’s not likely to make an impact in 2016, it will be a lot easier for him to earn playing time in a backfield that doesn’t have a talent like Elliott in it.  And while Isaiah Crowell and Duke Johnson haven’t been particularly bad, they haven’t bee good enough to guarantee that Jackson won’t work his way into next year’s rotation.  Especially if the team goes winless and wholesale changes are made across the roster.

Darius Jackson has the traits we look for in a potential workhorse NFL running back.  His production and athletic metrics paint the picture of a player who can succeed in all phases if given the chance to be a starter.  Indeed, Jackson’s Speed Score and Burst Score are both above the 90th-percentile. Unfortunately for Jackson, the same thing can be said about Duke Johnson.  As a third round pick, Johnson has a draft pedigree edge over Jackson.  But if Isaiah Crowell struggles to begin the year in 2017, he could be a candidate to start losing some early down work to a player of Jackson’s athletic caliber.  You never know when a player like Jackson is going to be put into a Kenneth Farrow-kind of situation, where they’re the last back standing on their team.  That alone makes him an ideal stash for next season.

As a seventh-round draft pick, the odds that Daniel Lasco was going to make a first year impact at the NFL level were slim.  Of course, if you’ve been following Player Profiler throughout the offseason, you should’ve already known this from reading the numerous pieces that we wrote about him over the course of the year.  The sporadic usage of the New Orleans running backs that we’ve seen throughout this season should inspire some hope that Lasco can eventually work his way into the rotation.  And with Saints backs accounting for over 100 of the team’s targets to this point in the year, there’s plenty of room for him to at least become an effective third down back if he can continue to stick around the roster.  But at this point in the year, you’re stashing Lasco because he has a higher ceiling than most people think.

Though it’s easy to dismiss Daniel Lasco because he’s a seventh-round pick, you can’t dismiss his athletic profile.  If he had recorded the same 10.97 Agility Score at the Combine than he did at his Pro Day, there’s a chance he could’ve been drafted even higher.  And with a higher draft slot may have come increased rookie year opportunity.  If anything, it proves that he’s an even better athlete than he’s already given credit for.  Even if his NFL future is strictly as a third-down back, that’s likely to be a pretty valuable position in this high-octane Saints offense for at least a few more seasons with Drew Brees at the helm.  Give him one or two monster highlight-reel plays during next year’s preseason, and he’ll become the next hot last-round flier.

With his 12 fantasy points per game still ranking eighth at the position, Zach Miller was well on his way to becoming the next breakout start of the Late Round TE Roulette series.  And though he has one more year on his current contract, the fact that he’s been prone to injury throughout his career doesn’t paint the brightest picture for his long-term future.  The team signing Ben Braunecker, an athletic and productive UDFA out of Harvard, shows that they’re already thinking about their future at the position.  And that future now includes another intriguing athletic flier at the position in MyCole Pruitt.  After being signed off of Minnesota’s practice squad, Pruitt should get a chance to earn a 2017 roster spot in Chicago.

Because he’s another player who was a late-round pick in the NFL draft, it’s easy to overlook a player with the kind of profile that MyCole Pruitt has.  An 81-catch, 863-yard, 13-TD senior season at Southern Illinois helped him record a 96th-percentile College Dominator Rating.  So we know he has the ability to carry an offense.  Doing it as a 6-2, 251-pound Move TE at the NFL level is going to be a challenge.  But with Logan Paulsen on board as a blocking TE, Pruitt won’t have to worry as much about perfecting that aspect of his game.  Though that will limit his overall upside as he wouldn’t be an every-down player in that scenario, it doesn’t mean he wouldn’t be able to record some boom fantasy weeks if given a sufficient target share.  By this time next season, it wouldn’t be out of the question for us to be talking about Pruitt as a potential starting option in playoff match-ups.

At this time last season, Will Tye was helping fantasy owners win championships.  After recording six double digit outings in his final seven games filling in for an injured Larry Donnell, 2016 was supposed to see Tye pick up where he left off to end last season.  But even with Donnell relegated to special teams duties, Tye has only been able to manage 5.5 fantasy points per game.  He’s still seeing the majority of the snaps at the TE position for the Giants, but he only has one double digit fantasy game to show for it.  With his increasing Snap Share failing to translate into the same kind of success as it did last season, the team could begin to look elsewhere for production at the position.  Sixth-round rookie Jerell Adams has flashed at times this season, and is a candidate to be the source of said production.

Though he’s only played 137 snaps on offense over the course of 11 games in his rookie season, Jerell Adams still ranks 23rd among qualified TEs with 1.72 Fantasy Points per Target.  The fact that he’s recorded a positive Production Premium and Target Premium is all the more impressive when considering how rookie TEs tend to struggle early on in their careers.  His sixth-round draft capital doesn’t guarantee him anything, but it’s still important to remember that both Larry Donnell and Will Tye came to the Giants as undrafted free agents.  The strong history of fantasy production for TEs playing with Eli Manning can’t be understated.  With Donnell being a free agent in 2017, and Tye being an exclusive rights free agent, Adams may have a quicker path to increased playing time than any fantasy owners realize.