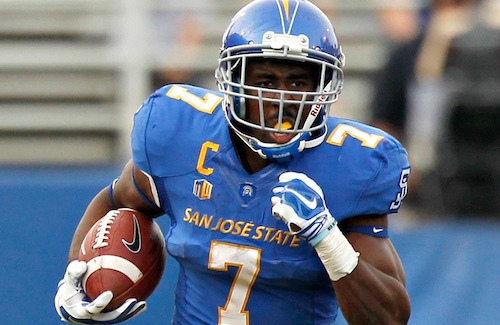 Ezekiel Elliott and Derrick Henry are the consensus leaders of a pretty deep class of rookie running backs.  Indeed, Elliott and Henry are stack-ranked 1-2 in virtually every set of pre-draft rankings.  After that, it’s anybody’s guess as to who deserves to be ranked where.

What makes this class of incoming rookie runners so exciting, and what makes them harder to rank as a result, is that each player brings such a unique skill-set to the field.  Given the subjective nature of ranking players, different rankers will value certain players over others for various reasons.  It shouldn’t surprise any of the Roto Underworld minions that PlayerProfiler is among a small minority of websites who value C.J. Prosise as a top-3 running back in this draft class, given his similarities to David Johnson.  That’s because this site places a premium on big, fast runners who are slick in the passing game.

Until these rookies are drafted to NFL rosters, all we have to go off of is college production and NFL Combine numbers.  We’ve already established that the wide receiver testing at this year’s Combine was depressing, given how productive a lot of these players were in college.  On the opposite end of the spectrum, the running back testing exceeded expectations across the board.  As a result, a number of players have become worthy of becoming late-round picks in dynasty rookie drafts.

This piece is going to focus on three running backs who are currently ranked outside of the top-5 in PlayerProfiler’s rookie player rankings, but who each deserve more praise than they’ve received to this point in the offseason.  These players range from potential third or fourth round picks to potential undrafted free agents, depending on whose rankings or mock drafts you’re reading.  While a majority of their success is likely to depend on when they get drafted and by which teams, these three runners each bring a different flavor to their play on the field and could make for potentially game-changing late round rookie picks.

Of the three running backs in this piece, Marshaun Coprich has the longest odds of being drafted.  But the 2015 Missouri Valley Conference Offensive Player of the Year was the only back from the FCS to receive an invitation to the Combine, which is cause for optimism that he’ll catch on somewhere as a free agent if he isn’t picked during the NFL draft.  His workout metrics aren’t fantastic, but it’s definitely a good sign that his Best Comparable Player on PlayerProfiler is Maurice Jones-Drew.  He also reported to the Combine 10 pounds heavier than his playing weight at Illinois State, which may or may not have something to do with the subpar burst and agility numbers he recorded.

For what it’s worth, Marshaun Coprich was said to have improved his 40-time to 4.38 at his Pro Day.  And he improved his Vertical Jump to 38 inches, up from his Combine mark of 34-inches.  Pull up a random scouting report on Coprich and you’re likely to see something about how he wins at the running back position with vision and quick feet.  All of this makes me feel more confident that his on-field lateral quickness is not fully reflected by his 11.84 (6th-percentile) Agility Score.

Even though he did a lot of wideout work at his Pro Day, running routes with receivers and catching everything thrown at him, the fact that Marshaun Coprich only caught 33 passes in four college seasons isn’t great for his every-down potential at the next level.  But there’s nothing wrong with being an early-down thumper in the NFL if you’ve had the kind of production that Coprich had throughout his college career, having recorded over 4,000-rushing yards and 50-rushing touchdowns over the past two seasons alone.  Watching Coprich against the only FBS team on Illinois State’s 2015 schedule (Iowa), I feel that he showed enough to make me think he’ll be successful if he gets to play behind an NFL-caliber offensive line.

If injury hadn’t limited Daniel Lasco to an ineffecient nine games in 2015, he would’ve generated a lot more buzz following his stellar NFL Scouting Combine performance.  His 41.5-inch Vertical Jump and 135’-inch Broad Jump were the best marks of the event, with his Broad Jump being an all-time Combine record for RBs and the 7th best all-time mark of any player.  All of this adds up to a 138.1 (100th-percentile) Burst Score, the highest score in the entire PlayerProfiler.com database.  When watching him on film, you can see how his elite burst helps him accelerate through holes and potential tackles that many other backs wouldn’t be able to make it through.  His strength (23-bench reps at the Combine) also helps him break those tackles.  If he had declared for the NFL Draft after his prolific junior season, where he registered 243 touches for 1,471 total yards and 14 total TDs, these workout metrics would likely bring him closer to being a first round pick.  Looking at a player’s best college season, even if it wasn’t their final one, is ideal in these situations because it gives you a window into their ceiling.

In the 2015 season’s second week, Daniel Lasco was in the middle of what would be his best game of the year before suffering a strained hip.  This injury messed him up for the rest of the season, and the ankle sprain he suffered in a game in November didn’t do him any favors.  Standing 6-0, and weighing only 209-pounds, the most likely explanation for the injuries is his 12th-percentile Body Mass Index (BMI) of 28.3.  Due to the low BMI and his penchant for getting nicked up, his best chance for long-term fantasy and reality football relevance may be as a passing-down specialist.  This could be his best-case scenario for a number of reasons.

Despite a low BMI, Daniel Lasco allowed just three pressures on 154 snaps in pass protection over the last two years.  Per Pro Football Focus, he ranked in the top 10 in the nation with a 98.7 pass blocking efficiency rating in 2014.  If he can add more weight once he reaches the NFL, it will only help him.  With a 33-catch season on his college resume, we also know that he possesses more lateral agility than his subpar Agility Score of 11.48 (29th-percentile) suggests.  This notion was confirmed when Lasco participated in California’s Pro Day and improved his numbers in both the 20-yard shuttle (4.13 from 4.26) and the 3-Cone Drill (6.84 from 7.22).  Those numbers would give him an Agility Score of 10.97, which would move him from the 29th-percentile to somewhere between the 88th and 89th percentiles.  It would also explain the 92-yard catch and run TD that he has on his college resume.  Assuming his true agility is closer to his Pro Day numbers than his Combine numbers, which is probable given the unusually large disparity between his scores, this could be a great sign for his future value.

In 2015, Tyler Ervin played his final season at San Jose State weighing 177-pounds.  Despite having “a very lean body type with limited growth potential,” he showed up to the NFL Combine weighing 192-pounds.  But even factoring in the weight gain, his BMI of 27.5 still ranks in the 4th-percentile among RBs.  Though he’s undersized compared to most workhorse runners at the NFL level, the well-rounded Ervin is the best bet among these three players to eventually become an every-down back.  Time in an NFL strength and conditioning program could help him come closer to the 200-pound mark.  And since he added 15 pounds to his playing weight in between the end of the season and the Combine, any presumed additional weight gain shouldn’t adversely affect his impressive workout metrics.

Tyler Ervin has drawn comparisons to Darren Sproles throughout the pre-draft process.  Which is easy to understand, being that both players were feature backs in college who recorded seasons of 300-plus touches despite being undersized.  And though Sproles demonstrated more strength at his Combine (23 bench press reps to Ervin’s 17), Ervin’s scouting reports listed his ability to withstand contact as a strength even when he was playing at 177 pounds in college.  But while there are these similarities, and though Ervin admittedly models parts of his game after Sproles, it’s not the most accurate comparison.  Sproles’ calling card has always been his agility, represented by his stellar 10.92 (93rd percentile) Agility Score.  It’s also not a surprise that this score was recorded by a 5-6, 185-pound running back who can get lower to the ground than most players.  The 5-10, 192-pound Ervin’s relatively unimpressive 11.37 Agility Score isn’t a huge concern, because his college receiving numbers tell us that he has the ability to win in that phase of the game.  These numbers include a 45-catch season in 2015, with three games of six or more receptions and six games with more than four receptions.

There aren’t many successful NFL running backs that fall into Tyler Ervin’s relatively unique archetype of being fast, bursty and undersized, which makes 2015 undrafted free agent Raheem Mostert his Best Comparable Player on PlayerProfiler.  Fortunately Mostert’s best college season, where he recorded 111 touches for 645 total yards and 3 TDs, can’t hold a proverbial candle to Ervin’s best college season where he had 339 touches for 1,935 total yards and 15 total TDs.  While Mostert played for Purdue, a school in a better conference than San Jose State, he never showed the ability to win as a feature back at the college level.  So this comparison isn’t a death knell to Ervin’s fantasy stock by any means.  But it may cause some fantasy owners to see him strictly as a pass catching specialist at the NFL level, which could make him a value for those who wait to pick him in their rookie drafts.

If you still doubt Tyler Ervin’s ability, consider that he was a much more prolific special teams player in college than even Darren Sproles (who wasn’t exactly a slouch in that department).  This is important to note because Rotoviz.com has taught us that special teams success can be important for identifying undervalued running backs.  Ervin scored five return touchdowns in his college career and averaged 188 all-purpose yards per game in 2015, second in the FBS behind Christian McCaffrey.  Special teams play is important for players like Ervin who will enter the NFL undersized, because it will keep him on a roster if a coach can’t identify a role for him within their offense right away.  It’s doubtful that any team who adds him will expect him to be a feature back from the start.  But it’s not impossible for him to get there at some point in his career.

Tyler Ervin is one of the more versatile backs in the 2016 draft class, having even spent some time playing cornerback in college.  He has high volume passing down back potential, but can be a home run if he adds even more weight and threatens to become an every down workhorse.