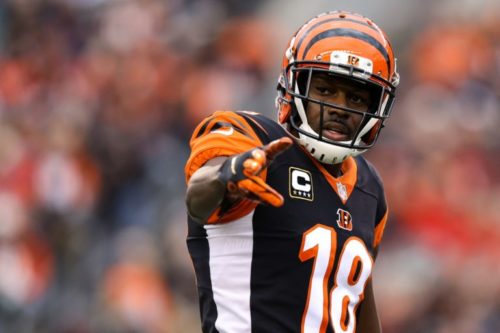 The goal of the Air Yards DFS Value Index is to determine the best “bang for your buck” in daily fantasy. This is accomplished by utilizing a players Air Yards and Air Yards Share to create a weighted Air Yards metric. We then compare this metric with each player’s DFS salary to create a Value Score. The best value Air Yards play on the week is always scored with a value of 100. All other players are compared against that player with decreasing value. This list is not a mere recitation of where each player is ranked — a simple machine could do that. This list contextualizes each players Value Score so as to present the top ten Air Yard values in DFS for the week focusing on players priced at or below $5,500 on Draft Kings.

This week, we’ll discuss two higher salary options and then present the top ten Air Yards value players priced at $5,500 or below on Draft Kings.

A.J. Green enters Week 3 of his age-32 season leading the league in Air Yards. Unfortunately, the veteran wide receiver has translated this opportunity to only 8.0 (No. 69 among qualified wide receivers) Fantasy Points per Game. Leading the league in Unrealized Air Yards and ranking No. 1 on this week’s Air Yards Value model, the former Pro Bowler is at a inflection point. Is he still one of the game’s top wide receivers or is he a sell low candidate? With a projected matchup against Darius Slay in Week 3, we may have to wait to find out.

Most fantasy gamers expected Adam Thielen to seize the lion’s share of the opportunity in the Vikings passing game this season. However, with a secondary receiving option yet to emerge, few predicted this type of volume. With a 33.3-percent (No. 3) Target Share and a 53.3-percent Air Yards Share, Thielen is the passing game in Minnesota. Assuming Kirk Cousins, can rebound from his dreadful start to the 2020 season, Thielen is set to explode as early as this week.

While K.J. Hamler‘s Air Yards numbers may look unimpressive, it’s important to remember that these statistics are cumulative. Making his rookie season debut in Week 2, Hamler quickly caught up to his teammates, finishing two yards shy from leading the Broncos in Air Yards for the week.

With Courtland Sutton out for the season, Hamler will continue to be heavily used by the Broncos and is seeing the opportunity to produce splash weeks. For the stone cold minimum on DraftKings, he is a screaming value.

At the start of the season, few would’ve predicted former UDFA Kendrick Bourne leading the 49ers in Air Yards after two weeks, but here we are. Among the most injured teams in the NFL, if not the most injured, the 49ers may be without George Kittle in Week 3. If Kittle remains out, Bourne is the best bet to lead the 49ers in receiving.

Michael Gallup is set to go off in Week 3. He is seeing top 24 WR opportunity, ranking No. 22 among qualified wide receivers in Air Yards, but has been unable to translate that to fantasy points with 94 Unrealized Air Yards. Look for him to realize his Air Yards in a plus matchup against a Seahawks secondary that has given up the most passing yards in the league. Giddy Up!

Henry Ruggs is continually targeted downfield by Derek Carr, evidenced by an 18.1 (No. 4) Average Target Distance mark. With 111 Unrealized Air Yards, the speedy Raiders rookie has yet to haul in a deep ball from Carr. 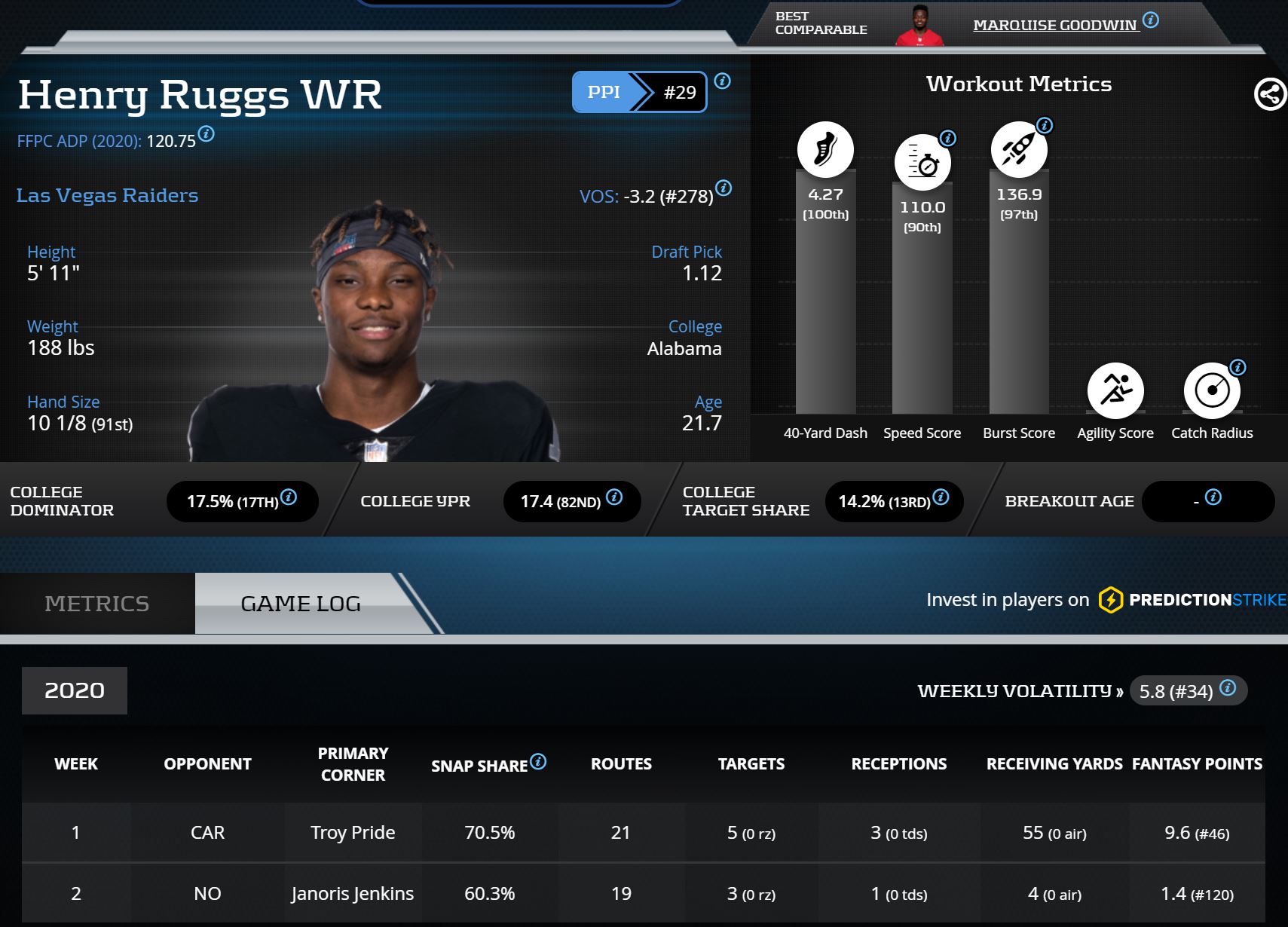 Ruggs will either square off against Stephon Gilmore, who was recently torched by a similarly speedy D.K. Metcalf, or be left alone by Gilmore if the stud cornerback takes on Darren Waller, who saw 16 targets. Regardless, Ruggs is an interesting contrarian play that is bound to hit a long touchdown at some point.

Jerry Jeudy is a focal point of the Broncos passing attack, accruing 203 Air Yards over the season’s first two weeks. With Courtland Sutton set to miss the rest of the season, it will likely stay this way. While Jeudy has underachieved thus far, ranking No. 7 among wide receivers with 133 Unrealized Air Yards, he is still seeing the opportunity required to be a week-winning receiver in DFS.

Just like that, Diontae Johnson appears to have over taken Juju Smith-Schuster as the go-to wide receiver in Pittsburgh. Not only is he out targeting JuJu 23 to 14, he also has outpaced him in Air Yards 174 to 62.

Despite these signs that he is clearly Pittsburgh’s go-to receiver, Johnson remains $1,200 cheaper. Being among the few receivers on this list that is clearly atop his teams depth chart as the WR1, he’s a smashing value.

A devastating season-ending injury to Saquon Barkley may result in the Giants airing it out a bit more in the passing game. If they do, Darius Slayton is the clear beneficiary. He continues to lead the Giants in Air Yards and has remained efficient with his opportunities, posting a +29.3 (No. 17) Production Premium, with only 44 Unrealized Air Yards. Still priced below $5,000, Slayton will look to continue his excellent efficiency against a banged up 49ers defense.

Robby Anderson appears on this list for the second week in a row, but some caution is in order. Unlike most of the receivers on this list, he is not leading his team in Air Yards categories. That honor belongs to D.J. Moore. This said, Anderson has outscored Moore thus far this season. While this is unlikely to continue, Anderson should still see his fair share of opportunities for a Carolina team that will constantly be in comeback mode.

Christian Kirk disappointed again in Week 2, posting only eight fantasy points on four targets. While the target volume is lacking, Kirk has been primarily utilized as a field-stretcher, averaging 20.4 (No. 1) yards of Average Target Distance.

Battling a groin injury, Kirk has yet to practice this week. If he does play, look for him to resume his role as the vertical threat in the Arizona passing offense and look for him to cash in on his 132 Unrealized Air Yards. If he doesn’t play, he may have to hope that Andy Isabella can’t capitalize on the opportunity in order to keep seeing his share of Air Yards.

DeSean Jackson remains at the top of the Air Yards Value Index for the second consecutive week. Much like the Eagles, he continues to underperform expectations. He currently ranks No. 4 in the league in Air Yards and averages single-digit Fantasy Points per Game. Look for Jackson and the Eagles to right the ship soon, starting this week against the 0-2 Bengals.

Good luck to all in week 3. May all your Air Yards be realized.