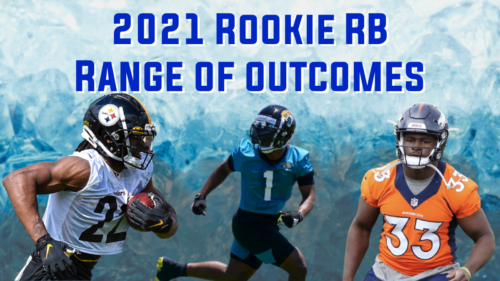 The Best Comparable Players tool on PlayerProfiler has the purpose of allowing users to find analytical anomalies, such as Clyde Edwards-Helaire. The Podfather and many in the RotoUnderworld community pumped the breaks on Edwards-Helaire as the rookie 1.01 in non-Superflex leagues last year. The reason was that there weren’t many running backs that looked like him that succeed at the NFL level, shown by his Best Comparable Player of Chase Edmonds. This article will be the start of a series that dives into the 2021 rookie class using a player’s five Best Comparable Players and other advanced stats in order to create a range of outcomes for the rookies.

An early lesson learned back in my minion days as a lurker on the PlayerProfiler website was not to overvalue a player’s Best Comparable Players. One look at Travis Etienne‘s comps, however, shows why he is the No. 1 running back in the 2021 rookie class. All five of his Best Comparable Players have had at least one season with 200 carries.

Marlon Mack represents Etienne’s floor. Before his junior season in 2019, Etienne admitted to feeling “nervous” when the ball was thrown towards him.

He worked on this perceived weakness because he finished his collegiate career with a 12.2-percent (87th-percentile among qualified running backs) College Target Share.

With a similar 11.8-percent (85th-percentile) College Target Share, Mack profiled as a three-down back. However, his 33 targets in his rookie season remain his career-high. During his two-year peak in 2018-19, Mack totaled 43 targets in 26 games (1.65 targets per game). His lack of receiving game work capped his ceiling as a touchdown-dependent RB2. If Etienne’s work in the passing game doesn’t translate to the NFL, he will be on the Mack career arc.

Fortunately for Etienne, joining him in Jacksonville is his collegiate quarterback, Trevor Lawrence. And with reports of Etienne running plays out of the slot in training camp, he should remain active in the passing game. Second-year running back James Robinson remains on the team and, because of that, Etienne’s rookie season may mirror his No. 1 Best Comparable Player, D’Andre Swift.

Through Week 8 last season, Swift only saw more than six carries in two games. Despite the frustration of low volume on the ground, he saw 29 targets in seven games and finished with five top-28 weeks during that span. In the second half of the season, he took over the carries while still seeing work in the passing game. In five games where he received double-digit carries, he had four top-18 performances.

Taking carries from Robinson is the hurdle for Etienne to secure a mid-RB2 floor with top five upside.

Measuring at 6-1 and 232-pounds, Najee Harris has the adequate size to be a bell-cow running back in the NFL. On the other hand, his glaring lack of Pro Day workout metrics was concerning for dynasty managers in rookie drafts. Unlike Jonathan Taylor (2020) and Saquon Barkley (2018), Harris was far from being the 1.01 lock in non-Superflex drafts despite his similar build to Taylor and Barkley.

Based on the similar draft capital, Mixon and Fournette represent the ceiling of Harris’ career.

In their respective four-year careers, Mixon and Fournette combined for RB7, RB9, RB10, and RB13 seasons in total points in PPR. This is promising for Harris since both have played behind porous offensive lines for most of their careers. With the sudden release of David DeCastro, the Steelers will have four new starters on the offensive line.

If Mixon and Fournette’s backend-RB1 seasons are Harris’ ceiling, then Conner’s backend RB2 seasons in 2019 and 2020 represent his floor.

Back to Williams’ Best Comparable Players, we are left with Knowshon Moreno and Joseph Randle. Moreno last played in the NFL in 2014 and Randle last played in 2015. Randle fell out of the league because he’s an asshole, not because of a lack of talent. Moreno struggled to stay healthy in his six-year career; he only played 16 games twice.

Moreno averaged 14.0 or more Fantasy Points Per Game in PPR scoring in three of his six seasons, including 18.5 (No. 4) FFPG in the last healthy season of his career in 2013. At his worst, Moreno had a solid floor built on his involvement in the passing game. He had four seasons where he averaged over three targets a game.

The takeaway from Moreno is that the archetype that Williams resembles has been able to produce in fantasy football.

Athleticism matters. 63 running backs averaged 7.0 Weighted Opportunities Per Game or more in 2020. 17 of those running backs had at least a 120.0 SPARQ-x Score, and nine finished in the top-24 in Fantasy Points Per Game.

Because of a lack of more recent Best Comparable Players, slightly less explosive Aaron Jones is an athletic comparison I have for Williams. Jones has a comparable 96.2 (49th-percentile) Speed Score to Williams (93.1), is built similar (5-9, 208 pounds), and has an identical 11.02 (89th-percentile) Agility Score.