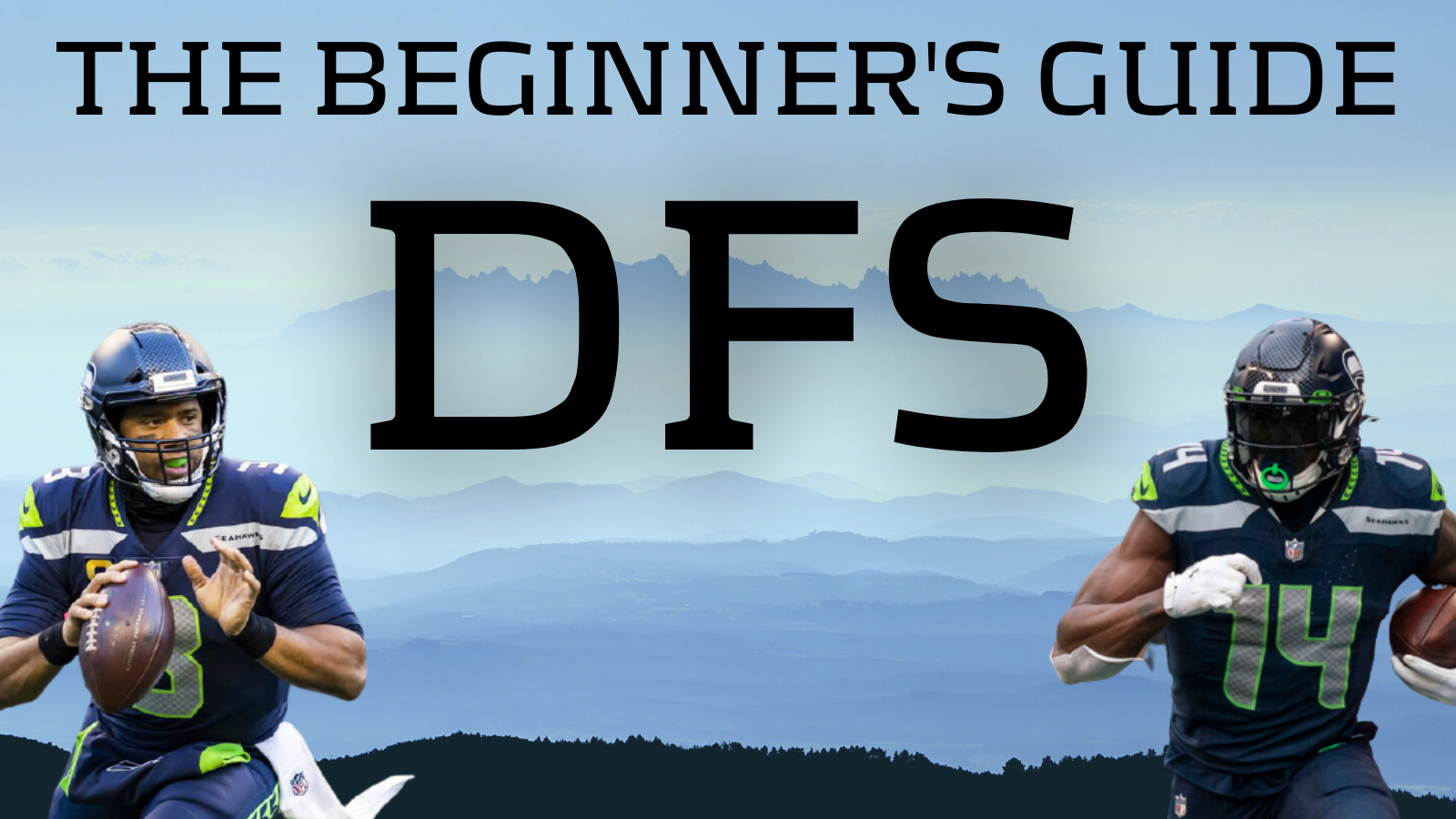 Explore the 2021 Beginner’s Guide to DFS

A quarterback with a pass-catching running back is a contrarian stack that can net you serious points. Game Script plays a significant part. If the team has a separate third-down back or pass catcher, they will see an increase in snaps if their team is down or if the game is high scoring. Shootouts are matchups you want to attack, and grabbing the pass-catching back could separate you from competitors targeting the same game. 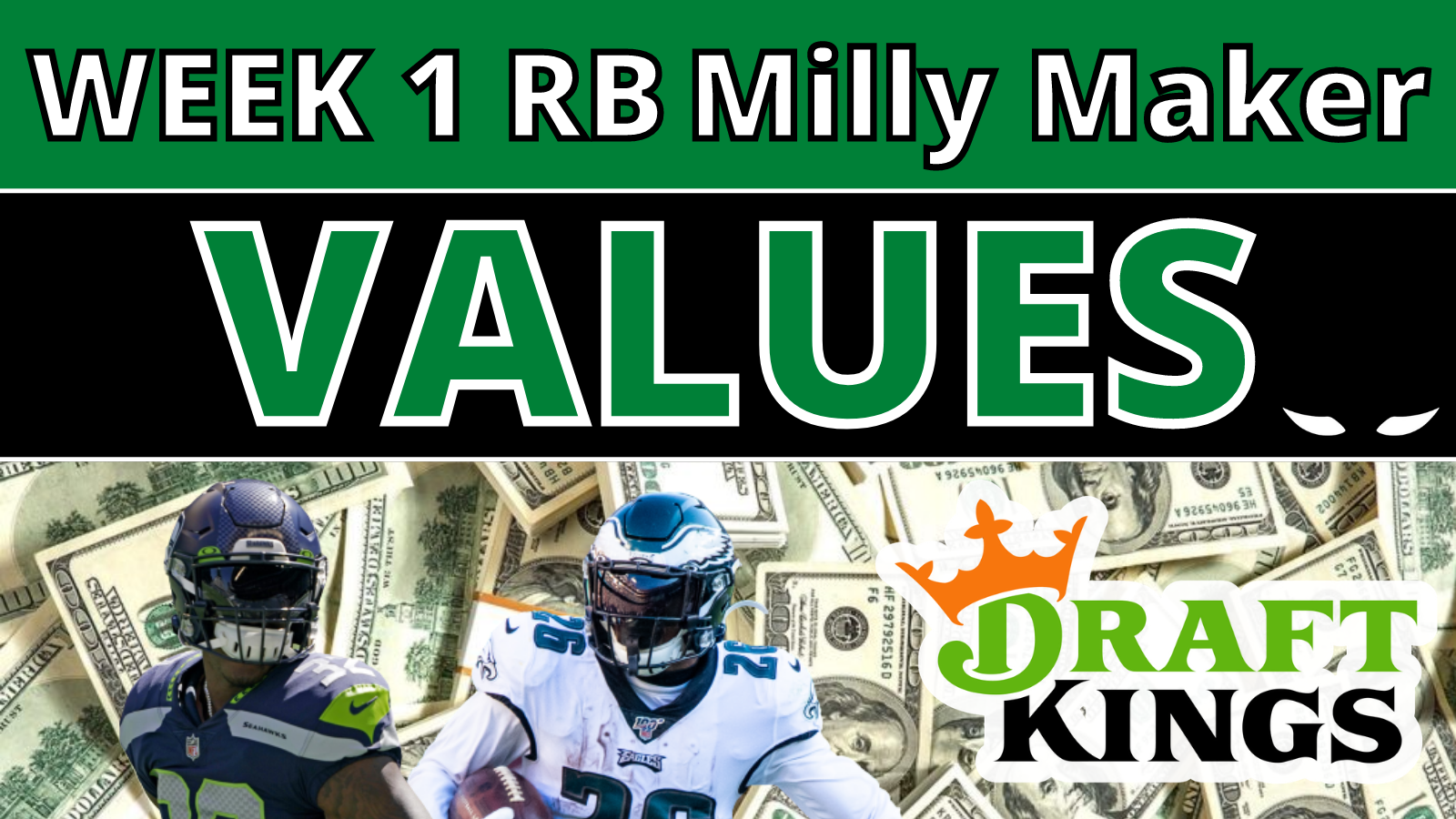 Although the Falcons were solid against the running backs in 2020, the defense was ravaged by injuries, specifically in the secondary. If they’ve improved whatsoever, Miles Sanders should be in for some work out of the backfield. His 2.71 (No. 24 among qualified running backs) Yards Created per Touch while his beat-up line offered a 59.3 (No. 13.) Run Blocking Efficiency rate should be a testament to what he’s capable of if the line is healthy.

With Travis Etienne being injured so close to the season, expect there to be a decently high percentage of ownership in all contests for James Robinson, who is far from a free square. He was only worth rostering in four tournament contests in 2020. Against the Texans, he disappointed in both matchups. However, with the loss of their best run defender in J.J. Watt and eight new starters in a different system, expect plenty of opportunities to get chunk gains and Breakaway Runs. 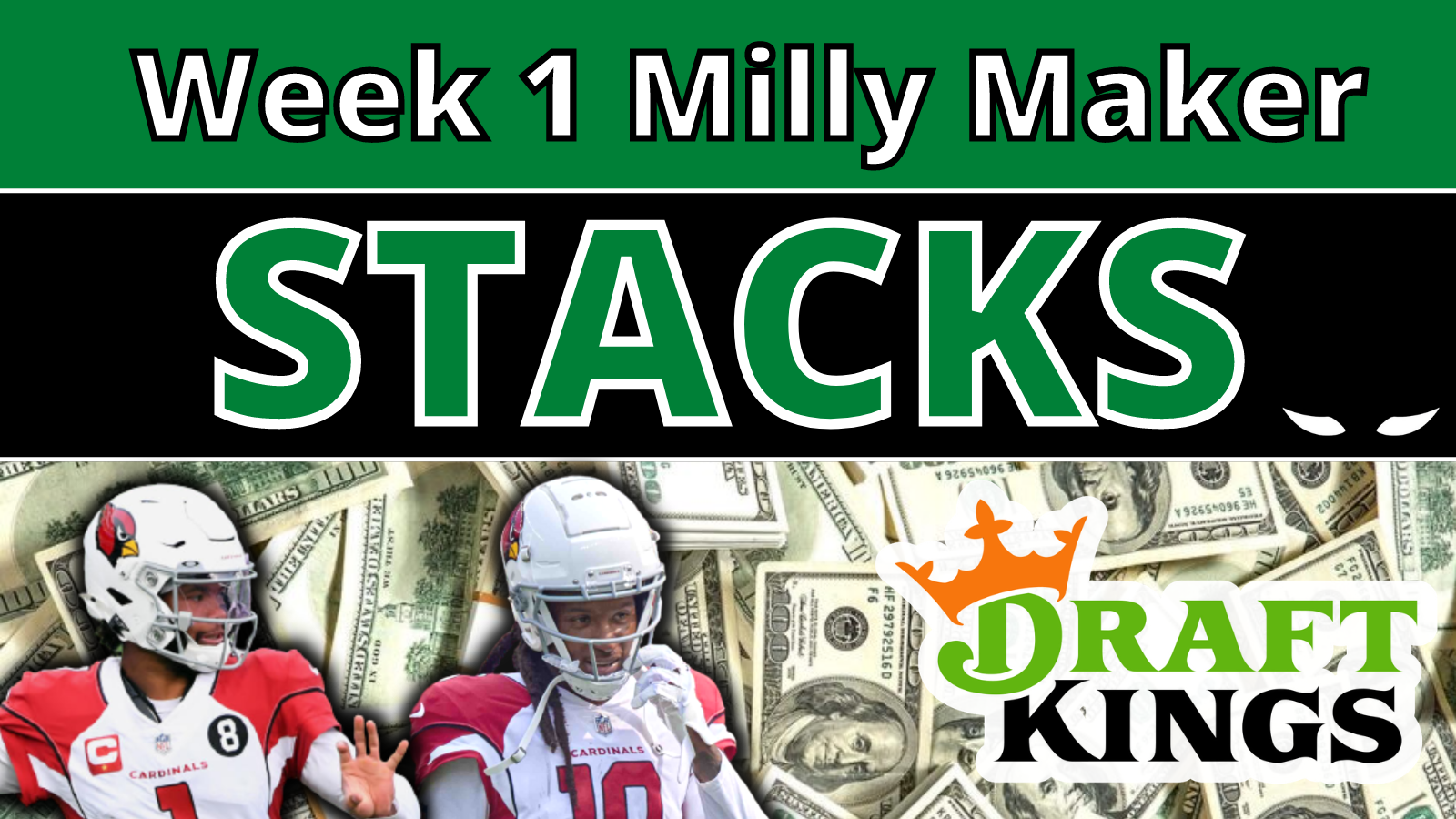 This Titans defense is going through a masked rebuild. They lost 11 defensive players to free agency, five of them starters. Kyler Murray and DeAndre Hopkins is one of my favorite Week 1 Milly Maker stacks, and if people are sleeping on how bad the Titans defense will be, they might be lower rostered than expected. Regardless, Hopkins should see a high roster percentage, so rolling him out with Rondale Moore should give some variance to the lineup.

The chalk of Week 1 Milly Maker stacks has arrived. Storylines surrounding Aaron Rodgers will undoubtedly result in a high roster percentage. Additionally, the pricing crushes any hope of leading with a Rodgers-Davante Adams stack. However, playing the stack with a third member of the offense might help eliminate some other shareholders. The Rodgers-Adams stack will have significantly high ownership levels and fading it is more likely to leave you high and dry than with a winning lineup. 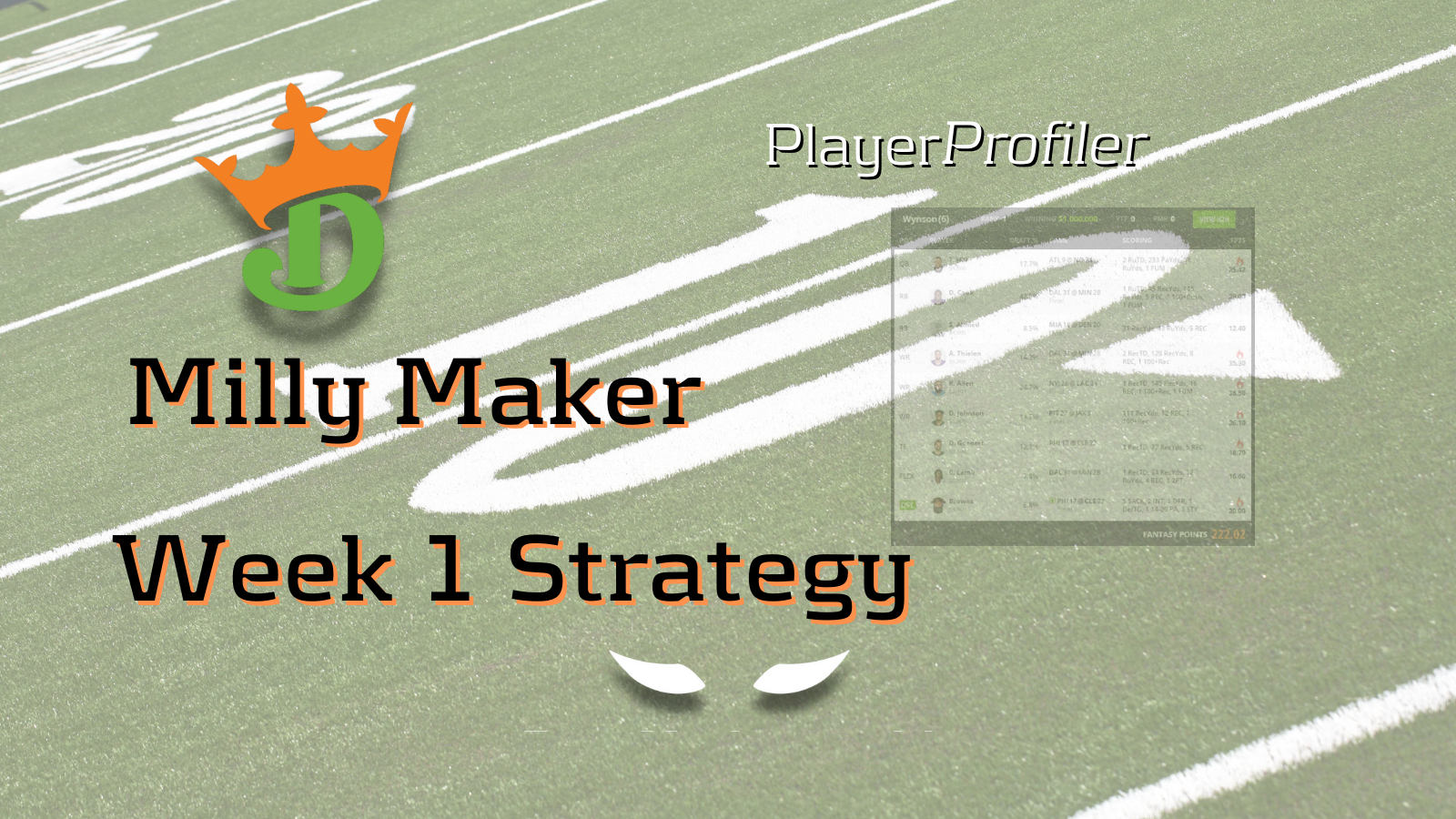 The first three to four weeks are always the toughest to play in the DraftKings Milly Maker, but nothing was tougher than playing the first three to four weeks in 2020. Without any preseason or live practices, there were few indicators of individual player value. With 2021 actually having preseason and live camps, the public will get to view some of these situations to make more accurate decisions for Week 1. However, nothing is guaranteed.

Building a base through stacking is the recommended method to go about constructing a lineup, especially early in the season. Each winning team for the first six weeks of 2020 had a dual stack; the first four stacked two wide receivers. This partially had to do with great offenses going against terrible defenses, but these first six weeks shouldn’t be ignored. The Milly Maker saw 50-percent of its first six winners in 2019 finish with dual stacks. 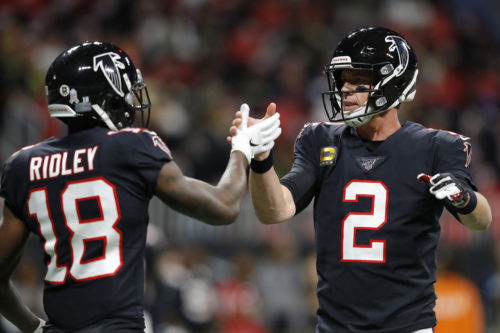 Calvin Ridley continues his reign as the Air Yards play if you are looking to pay up at the position. This is Ridley’s sixth consecutive appearance in this article dating back to Week 12. Since then, he has failed to finish outside of the top 25 receivers in fantasy points scored each week. He has also flashed WR1 overall upside. He remains a strong play again this week.

Jerry Jeudy’s usage in the Broncos offense saw a huge boon last week. His Air Yards had taken a hit after the rookie wide receiver suffered an ankle injury in Week 12. He made up for his lost opportunities in Week 16, seeing 15 targets and 180 Air Yards. Unfortunately, despite this monster usage, he only finished with 12.1 (No. 35 among qualified wide receivers) fantasy points. Assuming he is fed again, look for him to straighten out the drop issues and perhaps be a week winner in DFS. 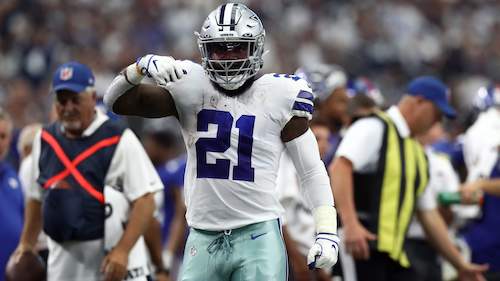 Ezekiel Elliott is not the 20-point lock that he used to be, but he still been a reliable producer across most of this year. Despite some struggles in the second half of the season, he averages 14.8 (No. 14 among qualified running backs) Fantasy Points per Game. With his price dropping down to $6,500, this might be the cheapest he will be in his prime. With Dallas’ defense likely to turn the game to a shootout, he has both a solid floor and high upside.

With a potent offense and a horrid defense, the Titans should provide a number of opportunities for Duke Johnson to get involved. In addition, it is possible the team lowers David Johnson’s workload due to his injury history and lack of game importance. Duke is exactly the kind of unreliable, cheap running back that could end up as a big win. At close to the minimum, he has a chance to provide value in all formats. 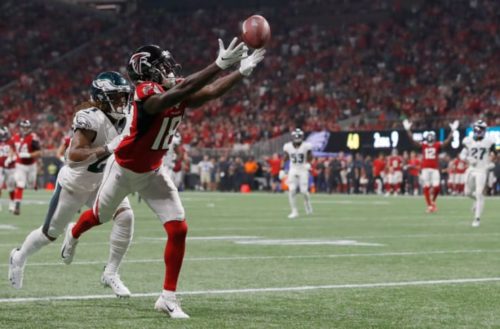 Calvin Ridley has transformed into the Air Yards Value king over the course of the past two weeks. During this time, he has seen over 200 Air Yards and at least 12 targets in each game. He finished as the WR3 in Week 14 and the WR1 in Week 15. Somehow, despite this production, Ridley is not the highest priced receiver on the slate. Exploit this error by DraftKings and make Ridley a mainstay across all formats.

Jerry Jeudy doesn’t seem to be the same after suffering an ankle injury in Week 12. Since then, he has averaged under 50 Air Yards per game. Prior to week 12, he averaged over 100 Air Yards per game. On the off chance that he just needed some additional time for the ankle to get fully healthy he is worth a tournament dart throw. However, beware that his recent usage suggests a different trend for his fantasy potential. 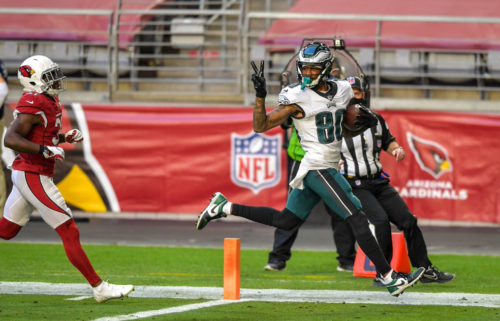 One bust week and one boom week earned Quez Watkins his Weekly Volatility score of 8.3, which ranks No. 24 among qualified wide receivers. It’s a sign of things to come from the sixth-round pick out of Southern Miss. At the stone minimum of $3,000 on DraftKings, he offers gamers salary relief and flexible roster construction coupled with upside. And at low projected rostership, he’s also a leverage play in large-field GPPs.

Chase Claypool’s recent streak of bust games figures to end sooner than later given his volatile nature. While JuJu Smith-Schuster and Diontae Johnson dink and dunk with short passes from Ben Roethlisberger, Claypool leads the team with a 29.4-percent (No. 32 among qualified wide receivers) Air Yards Share and 25 (No. 5) Deep Targets. And priced at a salary of $5,900 with a fantasy ceiling of 40 points, he offers an intriguing play. 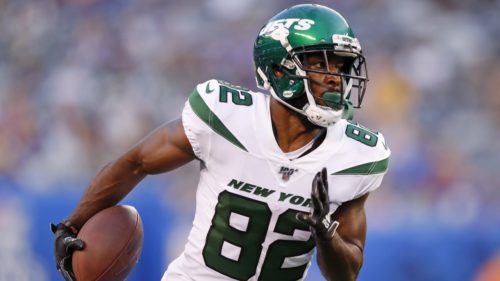 Jamison Crowder has once again separated himself as the alpha receiver for the Jets after hauling in six balls for 66 yards in their first win of the season. The Browns rank No. 25 in Defensive Passing DVOA and their slot CB Kevin Johnson is one of their weakest links, allowing big games to Golden Tate, Corey Davis, and Tyler Boyd this season. Crowder is a much better play on DK thanks to his low pricing and their full-PPR format.

XFL DFS cheat code Donald Parham is finally getting his shot in the NFL this week with Hunter Henry on the COVID list. Parham isn’t in play on FD due to his price, but he’s the stone-minimum on DK at $2500. His pricing makes him viable as a Flex option if you want to pay up for Chiefs stacks including Travis Kelce. He also correlates well in Chargers stacks given their high team total (26.0) and his projected red zone role. 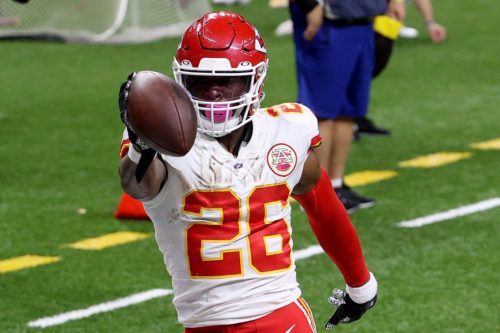 The Atlanta Falcons have allowed the fifth-most receptions to RBs on the season, giving a bonafide receiving back like Le’Veon Bell a high-floor. Given the spread of this game, Bell and the Chiefs should see nothing but positive Game Script. His price isn’t cheap, but at $5800, he projects as one of the week’s best values. Plus, there aren’t many exciting RB options without Alvin Kamara, Dalvin Cook, or Derrick Henry on the main slate.

Melvin Gordon has now averaged over 5.0 yards per touch in three straight games while averaging 18.1 DK fantasy points. He should get a solid usage bump on top of his efficiency this week with both Phillip Lindsay and Royce Freeman not practicing with hip issues. If they don’t suit up against the Chargers or are limited in any capacity, Gordon’s 59.9-percent (No. 20 among qualified running backs) percent Opportunity Share would certainly rise to elite levels.