The Titans secondary scared the masses off of Will Fuller this week. Still, his undeniable upside is inescapable, even with a $6,800 price tag on DraftKings. Sure, he faces a tough challenge against Tennessee’s Malcolm Butler and his +40.0 (No. 13 among qualified cornerbacks) Coverage Rating. However, in a divisional showdown with an over/under of 53 points, Fuller figures to eat regardless. His teammate Brandin Cooks boasts a higher projected rostership after he obliterated the Jaguars last week, but don’t bank on two boom weeks in a row from Cooks. His 12.0 (No. 7) Weekly Volatility mark signals extreme fantasy scoring fluctuation. 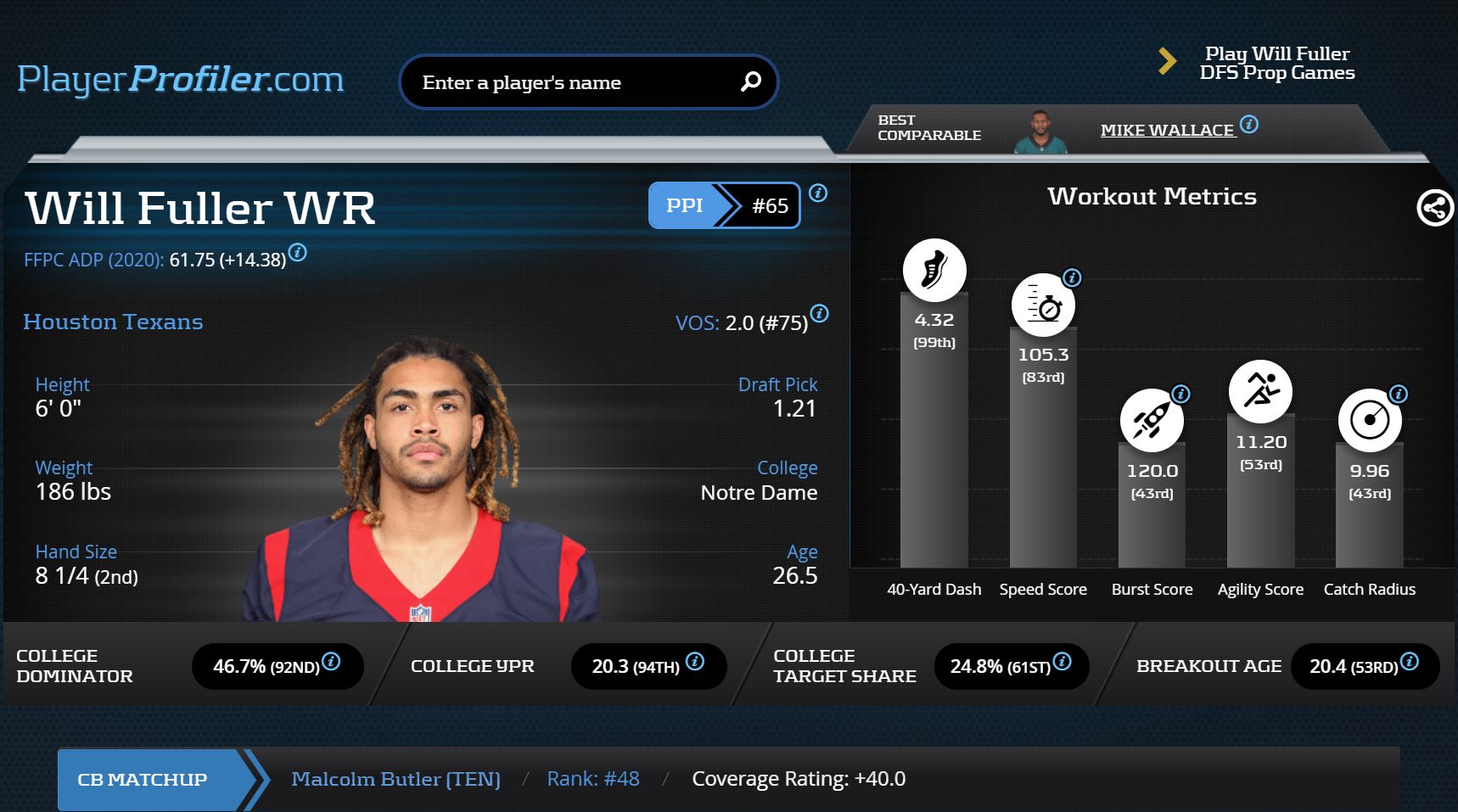 Fuller comes off a “down” game in which he posted 15.8 (No. 23) fantasy points, but his 34 routes run in Week 5 marked a season-high. He’s also found paydirt in three straight games, seeing a combined 15 targets over the past two. Considering his volatile nature, evidenced by a 8.7 (No. 23) Weekly Volatility score, and the fact that he hasn’t truly boomed yet this season, count me in. Few players offer the massive ceiling he provides. Remember, he posted a fantasy 50-burger against the Falcons last season.

Meanwhile in narrative land, it’s also no secret that the Texans started playing with a renewed energy following the firing of inept head coach Bill O’Brien. Their first game without O’Brien at the helm also marked their first win of the season. Deshaun Watson recorded season-highs with 359 passing yards, 347 Air Yards, and three touchdowns. He also recorded season-highs with 10.3 Yards per Attempt and 24.9 (No. 6) fantasy points. That’s good news for Fuller, whose has 272 (No. 12) Completed Air Yards. He always offers leverage in large-field tournaments when his rostership remains low, and this week is no different.

Darnell Mooney brings all the makings of a DFS-deployable boom-or-bust archetype, and has seen an increased role in recent weeks. His 4.38 (96th-percentile) speed gives him the ability to smoke defenses over the top. He’s also seen at least five targets per game and ran 33 or more routes in each of the last three. He’s drawn 25 (No. 45) targets to Anthony Miller‘s 23 (No. 51) and looks like Chicago’s new No. 2 receiver.

The rookie from Tulane averaged a robust 17.8 (84th-percentile) College YPR while commanding a 28.0-percent (77th-percentile) College Target Share. With his skillset, it’s a matter of time before he pops off for two TDs and 100-plus yards. At the bare minimum of $3,000 on DraftKings, he’s an ideal upside dart throw with low projected rostership. Carolina’s secondary poses an intimidating matchup, and the Panthers don’t yield a ton of fantasy points. Still, Mooney should fly under their radar and projects to see the most of Troy Pride, the No. 125-ranked player in PlayerProfiler’s cornerback rankings.

While it might feel dirty to roster anyone from the Jets in DFS, take a look at Jeff Smith this week. He’s seen 20 (No. 68) targets in two games this season – including five (No. 32) Deep Targets – and boasts a 100.0-percent (No. 1) Route Participation mark. His 77 (No. 91) Completed Air Yards compared to 169 (No. 28) Unrealized Air Yards signals that there’s room for more production if he can increase his efficiency.

Smith comes in at bare bones salary ($3,000) with an intriguing matchup against Miami. The Dolphins don’t do a great job of defending the deep ball. According to Sharp Football Stats, they’ve allowed a 10-percent explosive pass play rate, tied for third-highest in the league. Smith’s primary matchup figures to be against Xavien Howard, who is no pushover. His +52.2 Coverage Rating ranks No. 10 among qualified cornerbacks, but with 4.41 wheels, Smith possesses the speed to burn Howard.