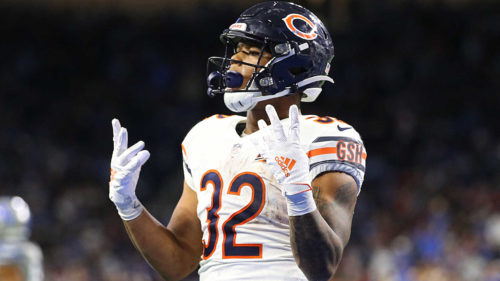 Free square running backs refer to RBs that come in severely underpriced relative to their projected roles. These players are often priced at the stone-minimum, opening up the DFS slate to jam in the premium plays. DraftKings has raised the salary floor for running backs this season from $3000 to $4000, so spotting these freebies is paramount if we want to afford the high-floor, high-upside smash plays. Using PlayerProfiler’s advanced stats, metrics, and analytics, we can identify RBs that fit the criteria. Here are the free square RBs for the NFL Week 6 DFS main slate.

A new bonafide bell cow has emerged in the NFL. In the wake of Tarik Cohen’s season-ending ACL injury, David Montgomery’s passing game usage has skyrocketed. Over the last two weeks, he has run at least 30 routes and seen 14 total targets. That usage put has put him at No. 6 among qualified running backs with 115 Routes Run and No. 7 with 23 targets. Montgomery has also seen Snap Shares of 86.2-percent and 78.6-percent over the last two weeks. For comparison, he only had a 57.9-percent (No. 17) Snap Share last season. This means he is active in every phase of the Chicago offense, which will be massive this week.

The Bears have a matchup with a Panthers defense that ranks No. 29 in Defensive Rushing DVOA through five weeks. Every RB not named Kenyan Drake has posted top-5 numbers against them. Even the dusty Todd Gurley managed 150 total yards and found the end zone on a long run last week against this unit. With 4.7 (No. 33) Yards per Touch, Montgomery’s efficiency hasn’t been there thus far, but he has shown the ability to create on his own, evidenced by a 26.6-percent (No. 20) Juke Rate.

Given his usage and matchup, Montgomery’s $5800-price tag is laughable. He projects as one of, if not the, best values this Sunday, making him the chalk in cash lineups. He won’t be easy to fade with a lack of premium RBs on the main slate, but that makes a Bears passing stack excellent leverage off of him.

Making his weekly appearance as a free square RB is David Johnson. After his opportunity dipped in Week 4, he bounced back with 17 carries, four targets, and his first 100-scrimmage yard game since Week 1 against the Chiefs. The touchdowns haven’t been there, dragging down his overall production, but the usage is what is important. He’s dominating work in his backfield, seeing an 80.4-percent (No. 6) Opportunity Share despite Duke Johnson‘s return. He also ranks No. 2 among RBs with a 79.1-percent Route Participation mark and 129 Routes Run, meaning his low reception total of 11 (No. 27) isn’t indicative of how Houston uses him. A major spike week is coming, and the Titans present the perfect chance.

Tennessee has ceded standout performances to Melvin Gordon, James Robinson, and Dalvin Cook, with all three finding the end zone and two of them topping 120 scrimmage yards. They also rank No. 21 in Defensive Rushing DVOA and are No. 19 against the pass, so the Texans should find efficiency in all phases of this game. That should lead to more red zone opportunities for Johnson, who has only seen seven (No. 41) Red Zone Touches through five weeks. He is bound for a multi-touchdown game based on his usage in this explosive offense.

The new DFS layup is whoever faces the Jets. Their offense is entirely inept, putting their No. 25-ranked DVOA defense in horrible situations every game. Myles Gaskin gets that luxury spot this week, with the Dolphins being 9.5-point home favorites against the brilliant mind of Adam Gase. Miami has the third-highest implied team total on the slate as well, meaning you should want the starting RB on this team. While Gaskin has been the unquestioned leader of this backfield all season, he officially booted Jordan Howard out of the mix last week when he was a healthy scratch. The Dolphins rolled with only Gaskin and Matt Breida, showing how much faith they have in their 2018 draft pick from Washington.

Gaskin has been a high-floor asset all season thanks to his excellent receiving role. He ranks No. 6 or better in targets, Target Share, receptions, and receiving yards. He also ranks No. 3 among all RBs with 22 Red Zone Touches. That’s a massive number for someone that has only scored once. Howard was the only one stealing the coveted goal line carries, but those will belong to Gaskin now in the best spot of the season. We can easily project him for work on all three downs with red zone touches. This slate has a serious lack of talent at RB, so Gaskin deserves consideration in cash lineups.

Given Melvin Gordon’s legal situation, Phillip Lindsay is worth mentioning as a potential free square RB. This will be his first game back from a toe injury that cost him four games. The good news is that Royce Freeman gained zero ground in his absence. Gordon dominated work without Lindsay with Freeman never touching the ball more than five times in a game. Lindsay also has established history in this offense, running for 1,000 yards in back-to-back seasons for Denver. He won’t be an 80-percent Opportunity Share guy, but he’ll pace the backfield in carries and boasts a 14.6 (93rd-percentile) College Target Share. He’ll be active on all three downs in this game and beyond.

The only downside is that he’s up against the Patriots. They aren’t the defensive juggernaut they were last season, ranking No. 21 in Defensive DVOA, but the Broncos haven’t hit their stride yet. This will also be Drew Lock’s first game back from his shoulder injury. For those looking to save significant salary in a lineup, Lindsay is the easiest path to that, but this isn’t a situation to trust in cash lineups.