Week 1 was a mixed bag. Fading Amari Cooper (4.7 fantasy points in PPR) was a correct call. Fading Michael Thomas was a good call for three quarters when he had less than 10 receiving yards…until he scored two fourth-quarter touchdowns. Starting Jakobi Meyers did not pay off either as the Patriots and Dolphins played one of the slowest games on the slate. But it’s a new week, so let’s dive into Week 2 of WR-CB Matchups.

Let’s recap what I’m looking to accomplish in this series: 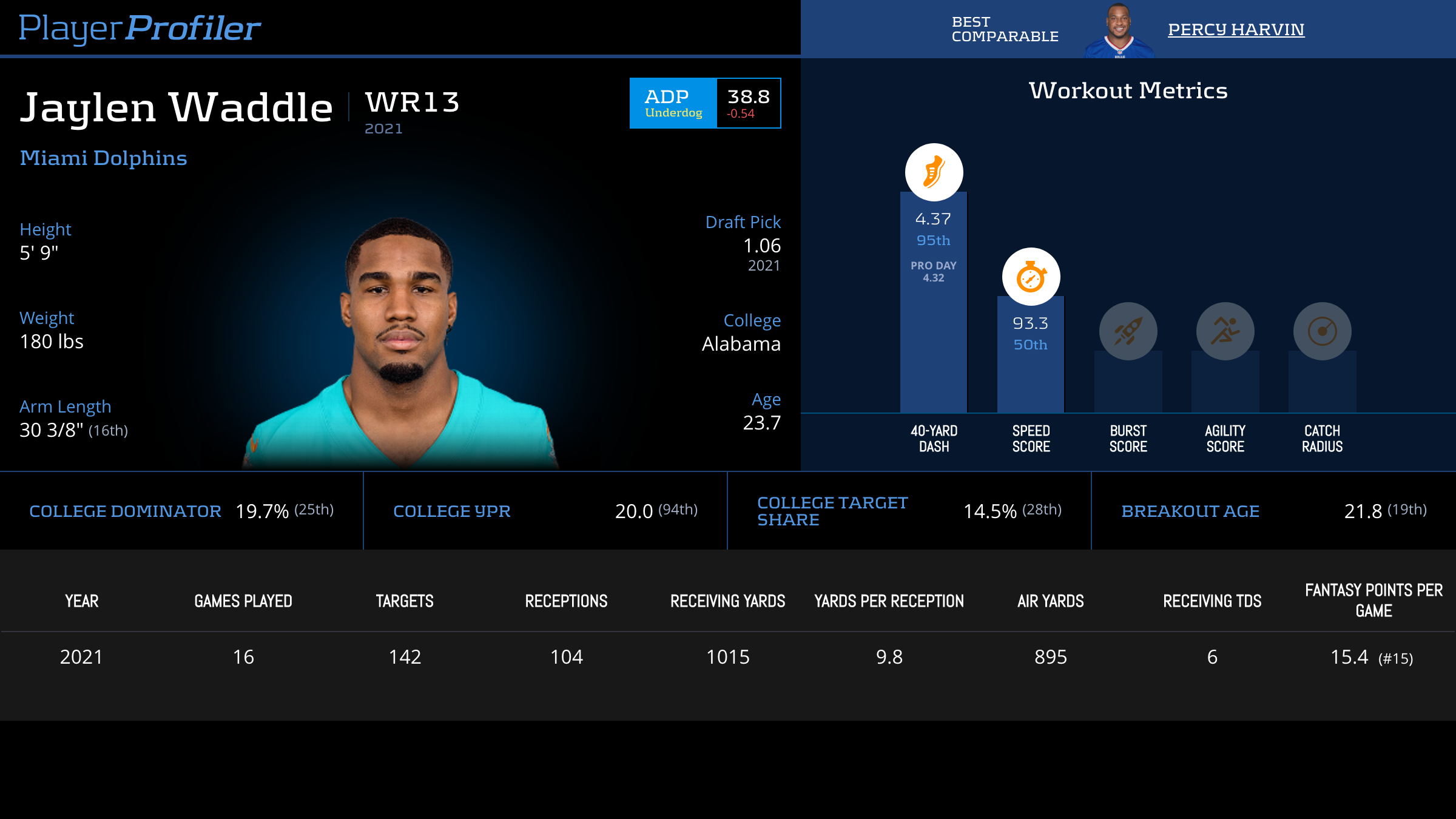 Fasten your seat belts Jaylen Waddle drafters. This fantasy season will be a bumpy ride. Waddle finished inside the top-20 last week thanks to a touchdown, but his opportunity metrics are concerning. His Target Share ranks No. 40 among wide receivers, and his Slot Rate plummeted from 43.8-percent last season to 17.5-percent in Week 1.

Meanwhile, Tyreek Hill monopolized the Target Share (41.4-percent, No. 3) AND Air Yards Share (No. 5) in Miami. The high volume of targets isn’t there for Waddle this season, and Tua Tagovailoa needs to prove that he can support two fantasy-relevant players.

Waddle’s primary coverage will be against Marlon Humphrey who is a fellow Alabama Crimson Tide alumni. Humphrey’s last season found him ranked No. 4 in Coverage Rating and No. 5 in Catch Rate Allowed. Last season against Miami, Humphrey allowed only two receptions for 20 yards. Last week, Humphrey was in peak form as he only allowed three receptions for 25 yards. 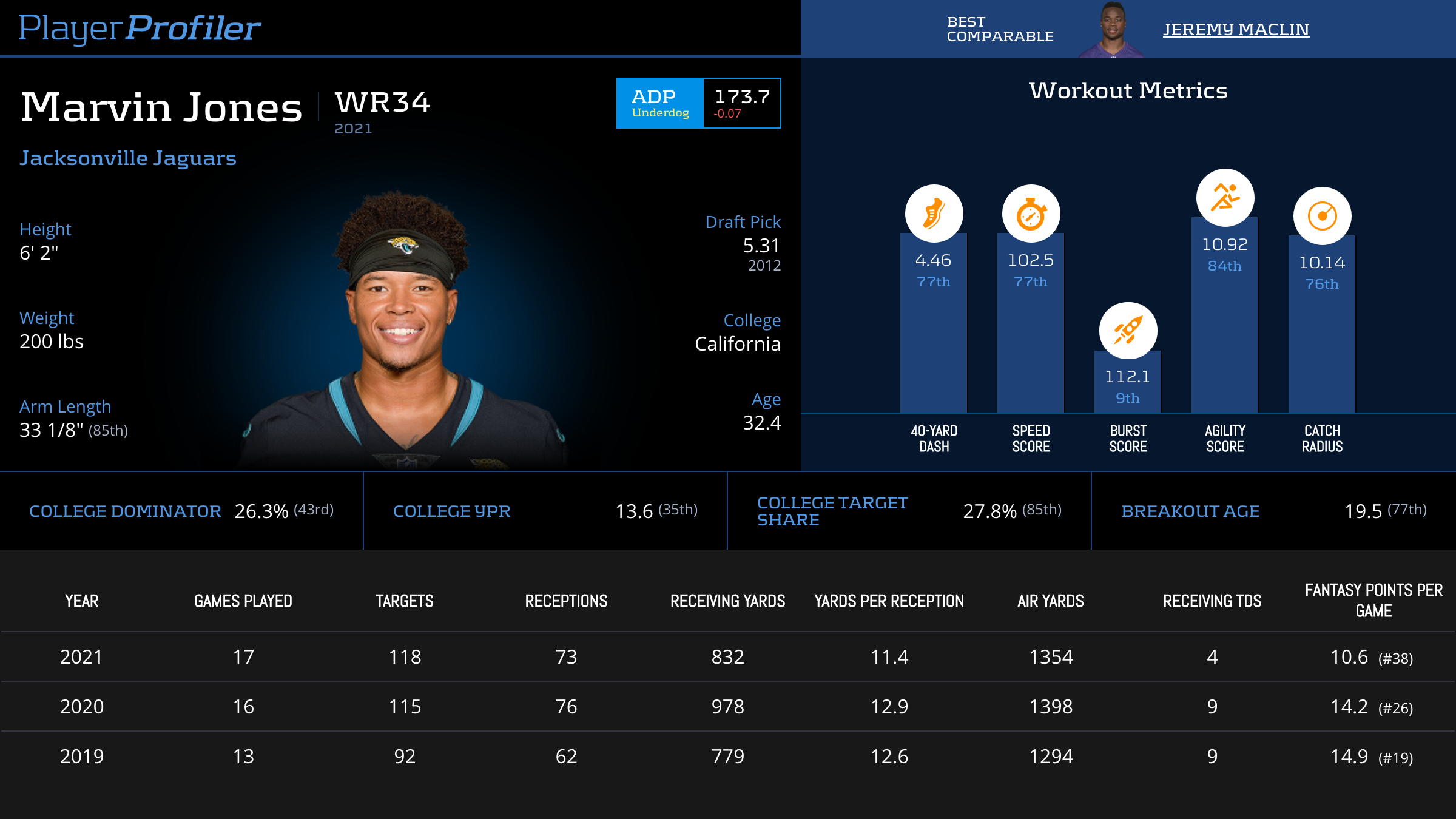 Travel north from Miami to find a different receiver in Florida to play in fantasy instead of Waddle. Marvin Jones isn’t sexy, and that’s why he’s only rostered in 15-percent of Sleeper leagues, but he’s the perfect target for desperate teams that need a good play. Jones is top-20 in Air Yards and Routes Run. On top of that, he’s top-10 in Average Target Distance, Unrealized Air Yards, and Deep Targets.

What Jones lacks in a desirable Target Share (15.8-percent, No. 48), he makes up with a respectable Snap Share which ranked just outside the top-30. Jones’ receiver teammates Christian Kirk and Zay Jones are matched up against two top-35 cornerbacks with Shadow Rates inside the top-40.

Brandon Facyson has a negative Coverage Rating (-7.3) and lacks the speed (43rd-percentile 40-Yard Dash) to keep up with Jones on deep routes. It’s worth mentioning that Marvin Jones‘ best fantasy performance last season was the Jaguars’ home game against the Colts. Both the Jaguars and Colts finished inside the top-8 teams in Pace of Play. 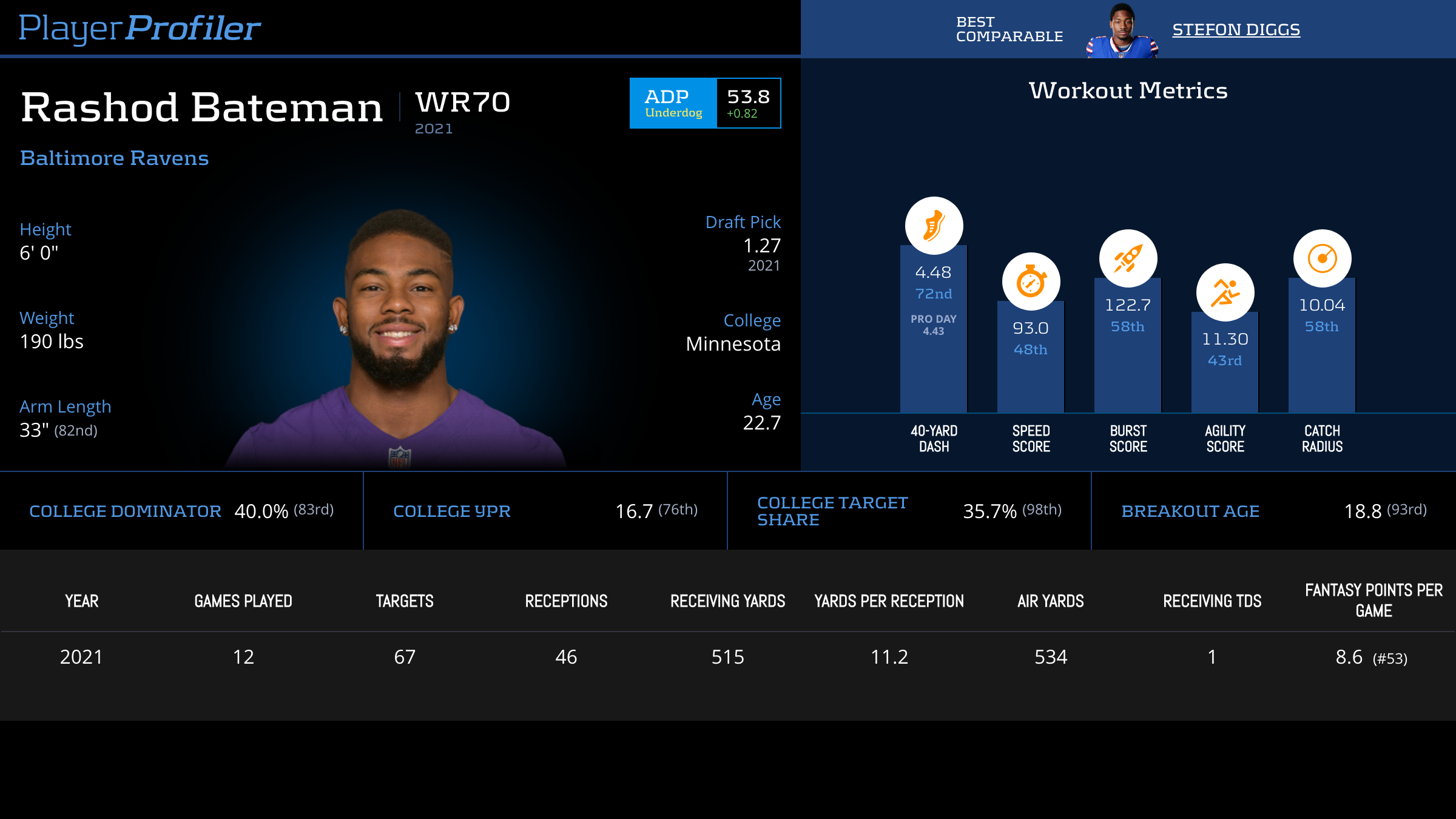 As previously mentioned with Jaylen Waddle, the Dolphins and the Ravens are two slow-paced teams. Expect a slow game, with little passing and not much scoring. The game total is at 43 points, and the Ravens are a 3.5-point favorite at home. A low-scoring game with the home dog favored? That’s the perfect scenario for the run-heavy Ravens to keep the ball on the ground instead of airing it out.

Bateman avoided a disastrous Week 1 performance with a 55-yard touchdown reception late in the third quarter. His opportunity metrics from Week 1 show that inconsistent performances will occur. He was outside the top-50 in targets, Snap Share, and Route Participation.

Xavien Howard appeared sharp to start the season. He’s No. 2 among cornerbacks in Snap Share and there are few metrics that he’s actually outside the top-30. Last season, his Coverage Rating was +16.0 (No. 16). In Week 1, he stayed the course, finishing with a Coverage Rating of +16.6 and a 50-percent (No. 22) Catch Rate Allowed. 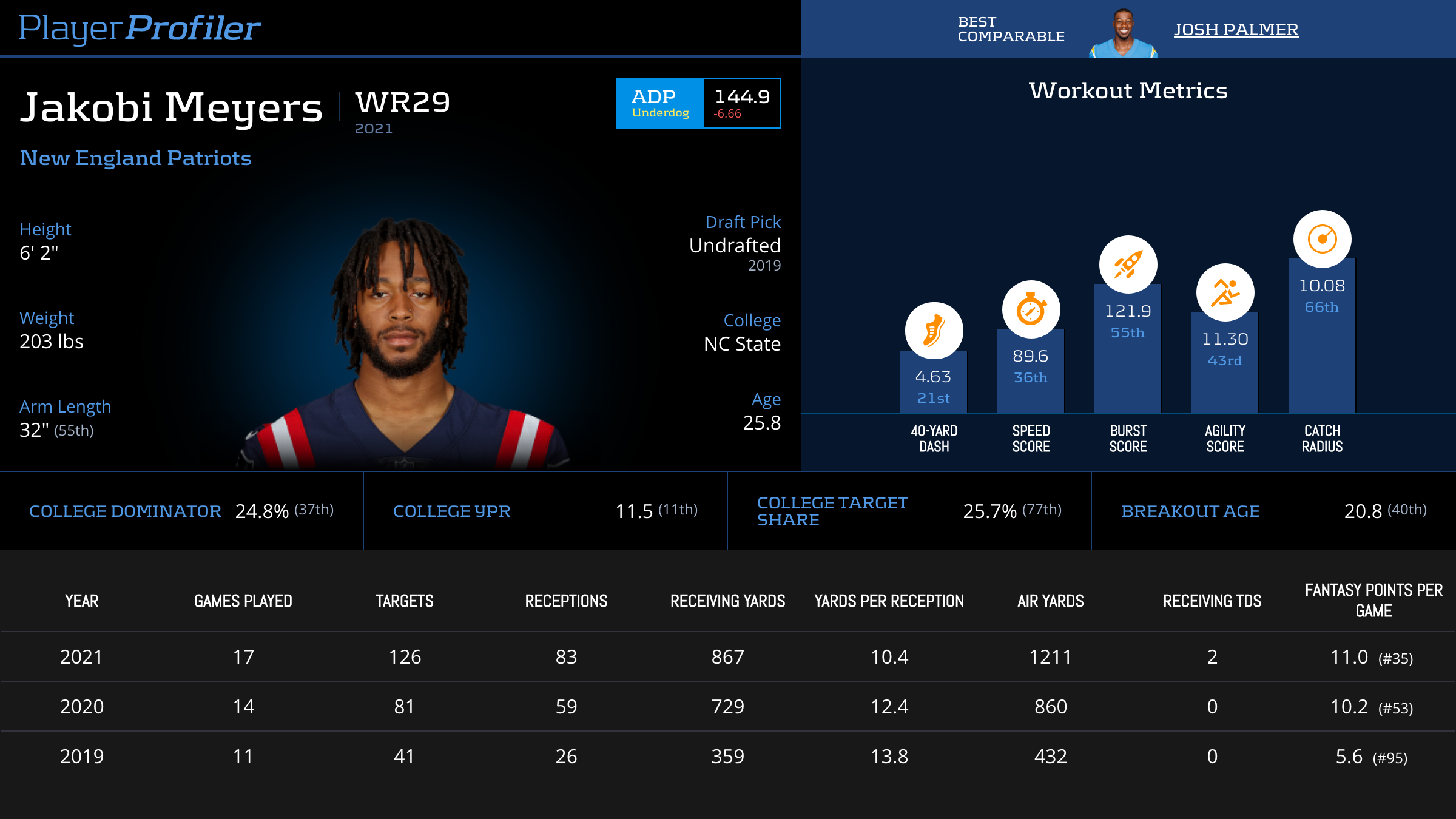 I know, I know, I know. I told readers to PLAY Jakobi Meyers last week, and he responded with a 4-55-0 stat line and barely topped 10 fantasy points. But there is not a better play that’s available in over 50-percent of Sleeper leagues.

Meyers saw a 92.5-percent (No. 16) Snap Share, 20.0-percent (No. 32) Target Share, and 32.7-percent (No. 23) Air Yards Share. On top of that, his 14.8 (No. 14) Average Target Distance in Week 1 was MUCH higher than in years past where he’s been under 11.0 every season. The opportunity metrics are there for Meyers, and the production will follow suit. Unlike their Week 1 opponent the Miami Dolphins, the Pittsburgh Steelers are a faster offense with a 2.01 (No. 13) Pace of Play. Fast offenses can pick up the pace for a slower offense like the Patriots. More plays lead to more opportunities which will lead to a greater chance of Meyers scoring fantasy points.

Meyers’ matchup this week is Cameron Sutton who was targeted against TEN times by the Cincinnati Bengals last week. Joe Burrow identified him as the weak link of the Pittsburgh Steelers defense. To his credit, Sutton only had three receptions allowed, but his primary coverage was Mike Thomas, a journeyman WR. Expect Bill Belichick and Mac Jones to target and challenge Sutton early and often.