This is, unfortunately, this is the last Thursday night game of the year and thus the final edition of this season’s TNF Showdown series. Without further ado, let’s see what the red-hot Kansas City Chiefs and the surging Los Angeles Chargers have in store for us and we make our maiden voyage through the 2021 fantasy playoffs.

The Chiefs have turned the tide from dead to red hot, yet Patrick Mahomes still struggles to put up elite fantasy numbers. He averages a disappointing 21.8 (No. 8 among qualified quarterbacks) Fantasy Points per Game, now because of the lack of need to throw. Over the past three games, Mahomes averages 30 Pass Attempts per Game (well below his seasonal average). While he’s been more erratic than normal, he’s still been performing at elite efficiency levels. Against a powerful Chargers offense, the Chiefs will have to be more pass heavy and score more points. Because of this, I’m not worried about his down-trending volume and am slotting Mahomes right back into the top 5 QBs this week.

Surprisingly, the Chief’s running backs have been solid producers, even with Clyde Edwards-Helaire and Darrell Williams playing in tandem. This output, however, mainly derives from the 3 total touchdowns the pair have scored over the past two weeks. Clyde has been the backfield’s touch and snap leader since returning, and is averaging 15.33 Fantasy Points per Game in his last three performances. He hasn’t been efficient, but any lead-back in a Mahomes offense is worth deploying.

Some teams have figured out how to slow down Tyreek Hill, which has led to a spotty season. He’s finished with under 15 fantasy points in seven of 13 games. Kansas City has the league’s most consolidated target distribution, with Hill capturing a 27.0-percent (No. 9) Target Share. His opportunity metrics are off the charts and, with 348 (No. 9) Yards After Catch and 8 (No. 6) Total Touchdowns, is the same game-breaking threat that he’s always been. Chargers Asante Samuel and Derwin James are both game-time decisions, making Hill an elite play.

The TE1 is back to doing TE1 things. Yes the past two weeks were rough, but Kansas City needed nearly zero offensive output to win those games. The passing game is going to be back in full force tonight. Opportunity is not a problem for Kelce, who has a seasonal 22.6-percent (No. 4) Target Share and a 15.0-percent (No. 4) Hog Rate. The problem has been converting targets to receptions, as shown by his 66.4-percent (No. 25) Catch Rate. Nevertheless, the most consistent TE fantasy play since prime Rob Gronkowski is always a top play.

Justin “Herby Hancock” Herbert has been in one funky groove this season, coming in to the tune of 23.6 (No. 3) Fantasy Points per Game. The high volume thrower has efficiently amassed a 92.9 (No. 12) True Passer Rating and a 81.5-percent (No. 2) Catchable Pass Rate. The killer is that lineman Rashawn Slater, who plays an integral role in the Charger’s 87.6-percent (No. 4) Protection Rate, will be sidelined tonight. Both sides will be missing players, as the Chiefs will be missing L’Jarius Sneed, Willie Gay, and potentially Chris Jones. Losing Slater is a killer, but not enough of one to drive me away from herby in fantasy. 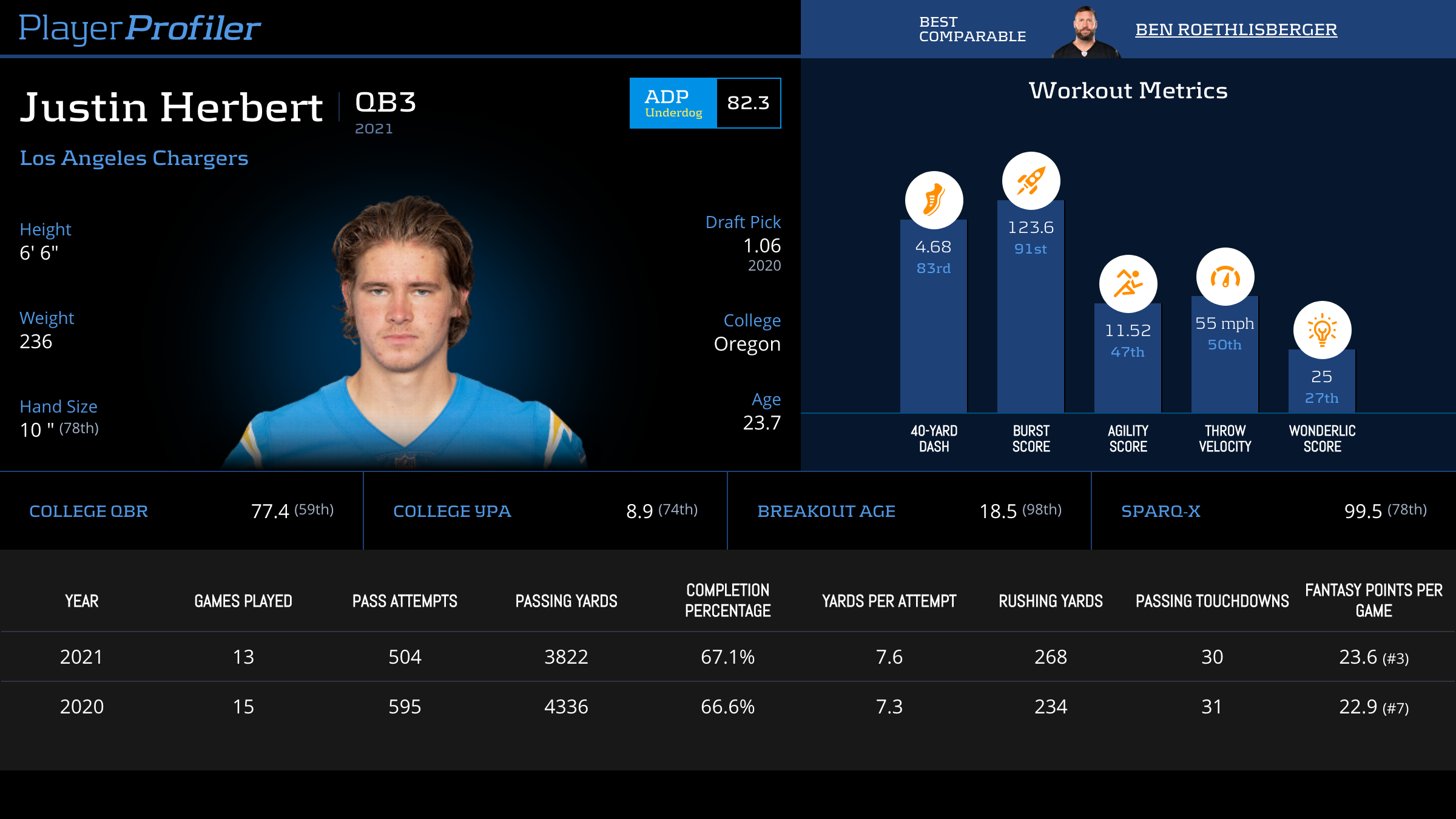 Austin Ekeler is a game-time decision with an ankle injury, but is expected to suit up and play. If he’s a full-go, he’s a surefire hit. The former UDFA is averaging 21.3 (No. 3) Fantasy Points per Game and has earned 214.4 (No. 4) Weighted Opportunities. He’s also hyper-efficient, creating 1.17 (No. 3) Fantasy Points per Opportunity. To seal the deal, he earns a 15.3-percent (No. 4) Target Share. He’s the best process play of the 2021 season. You’ll have to monitor pre-game activity, but its likely that Ekeler will be a full go unless otherwise stated. If he doesn’t go at all, neither Justin Jackson  nor Joshua Kelley are worthwhile enough to deploy in the playoffs.

Keenan Allen isn’t a good use case for an efficient receiver, but surely is a solid representation of a productive one. Yearly, he maintains an elite opportunity share and has a massive 27.0-percent (No. 6) Target Share and 18.0-percent Hog Rate in 2021. He is proof that volume and consistency can yield an elite output in PPR leagues, scoring 15-plus fantasy points in eight of 13 games. Kansas City’s injury issues only boost Allen’s already elite outlook for tonight’s matchup.

While he’s having a career year, Mike Williams is still battling decoy disorder. Through the first three weeks, it was clear that his usage was different (and more fitting to his skillset), and the results were beautiful. He’s regressed to his typical usage since, but has shown a glimpse of a late season revival. He creates plays and sees a hefty amount of Red Zone opportunity, with 347 (No. 10) Yards After Catch and 17 (No. 6) Red Zone Targets. Given the situation, he’s is a Flex play tonight. If Austin Ekeler sits, drive Williams’s projections through the roof.

The Chief’s enter the day as visiting favorites, favored by 3 points. Both teams will be missing key pieces. For Kansas City, missing Chris Jones and Willie Gay is a huge blow. The Chargers are out Rashawn Slater and could additionally miss 3 other vital members. The Chiefs are the better team at full strength, but the injury situations make this tough to predict. Because I expect at least Derwin James to suit up, I am picking the Chargers to cover.

The point total is set at 52 points. Myself, along with the majority of betters, love the over with this total. Both defenses are either missing players or have players battling injuries, and the Chargers are out their best offensive lineman. Both teams are going to have to go full throttle on offense if they want to win this game. We are going to get a shootout tonight.