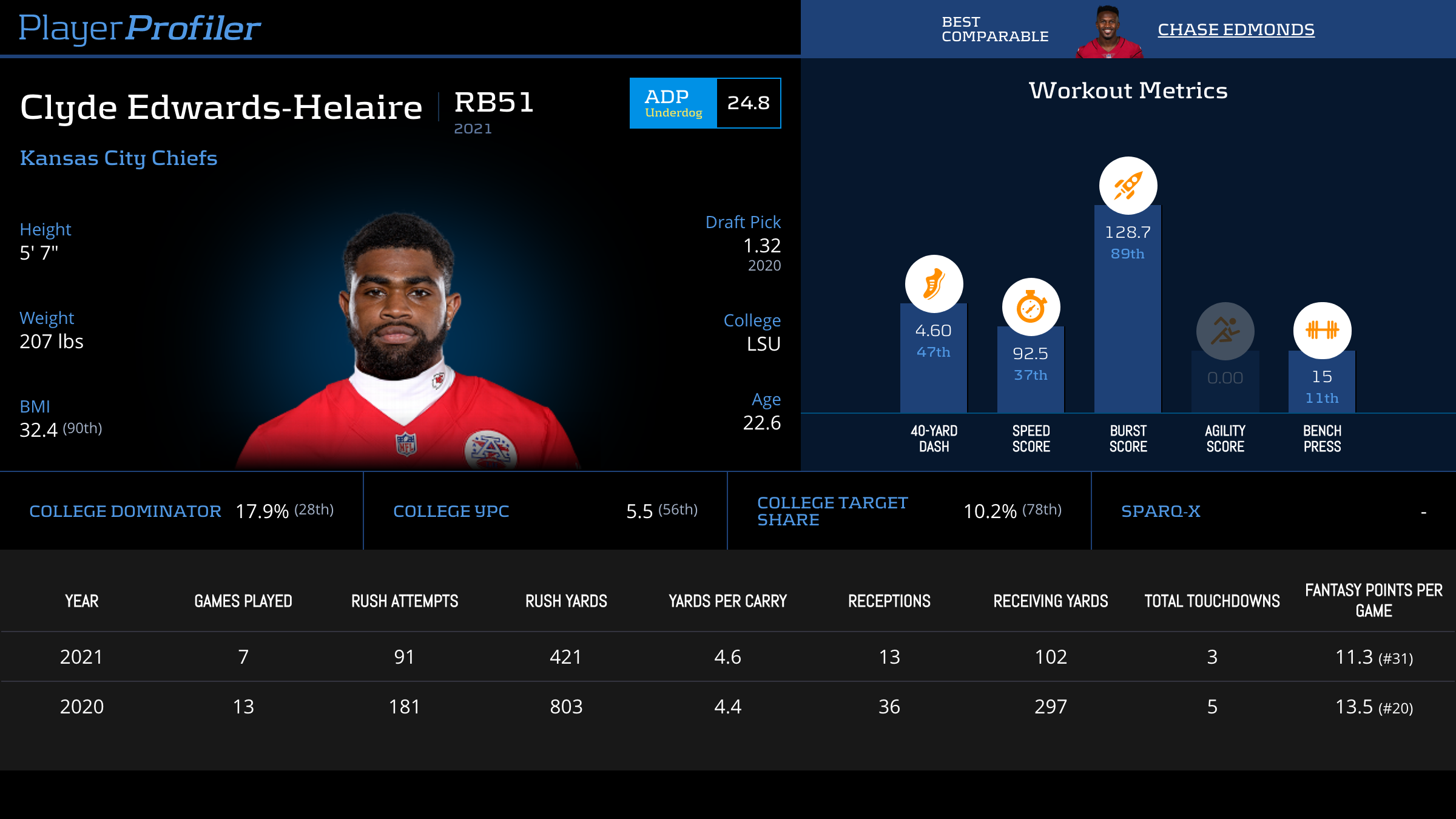 In three games since returning from injury, Clyde Edwards-Helaire has 44 touches and 3 rushing touchdowns. While he is still splitting snaps with Darrell Williams, CEH has double-digit fantasy points and top-24 RB finishes each of his games back from injury return.

The Chargers have continued to struggle against the run this season. They have allowed at least 100 yards rushing to opposing backfields in seven of their last nine games and allowed at least 4 receptions to opposing backfields in four of their last five. Los Angeles is easier to run on than pass on, and while Patrick Mahomes will let it fly, expect CEH to be involved as a runner and a short-yardage receiver. With a juicy matchup this week, look for CEH has a greater chance to boom with his fantasy output.

Baltimore once again finds itself on the receiving end of this list as the Ravens secondary has taken hit after hit in the injury department this season. Their current top corner is Anthony Averett, who will likely guard WR1 Davante Adams. Chris Westry, a rookie UDFA, slot CB Tavon Young will likely cover Marquez Valdes-Scantling and Allen Lazard.

Just like that, Chris Westry, a guy signed to a reserve/futures deal in January, is going to be a difference-maker for the Ravens down the stretch as a replacement for Marlon Humphrey.

Neither Westry nor Young rank in the top-70 of PlayerProfiler’s CB rankings. MVS and Lazard have seen a combined 41 targets in each of their last three games and will continue to be used often with Randall Cobb out. Expect both to get plenty of usage and opportunity for big fantasy output against a banged-up Baltimore secondary. 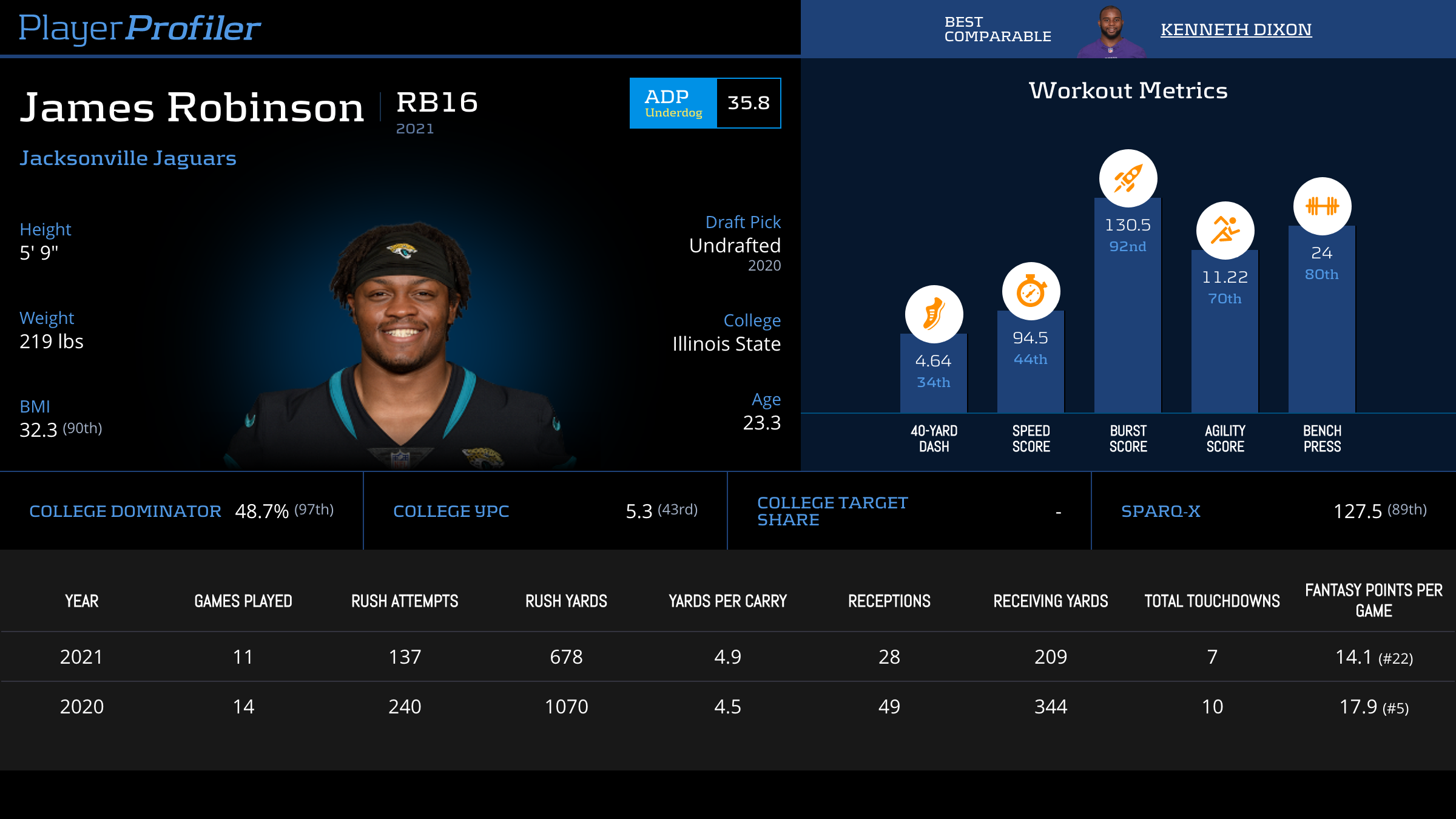 Houston’s run defense this season has been subpar. The Texans have allowed over 100 yards rushing to opposing backfields in all but two games this season, including over 150 rush yards given up each of their last two games. While Urban Meyer’s usage of James Robinson has been questionable lately, he has 6 top-20 RB finishes this season. Entering Week 14, Robinson had 4.7 (No. 12 among qualifying RBs before Week 14) True Yards Per Carry and 7 (No. 11) total touchdowns. He has been efficient and scored well for fantasy. Houston has allowed the second-most rushing TDs in the league this season. While Robinson’s usage has not been great lately, he is in a great spot with opportunity to carve out chunk runs and score against Houston this week. 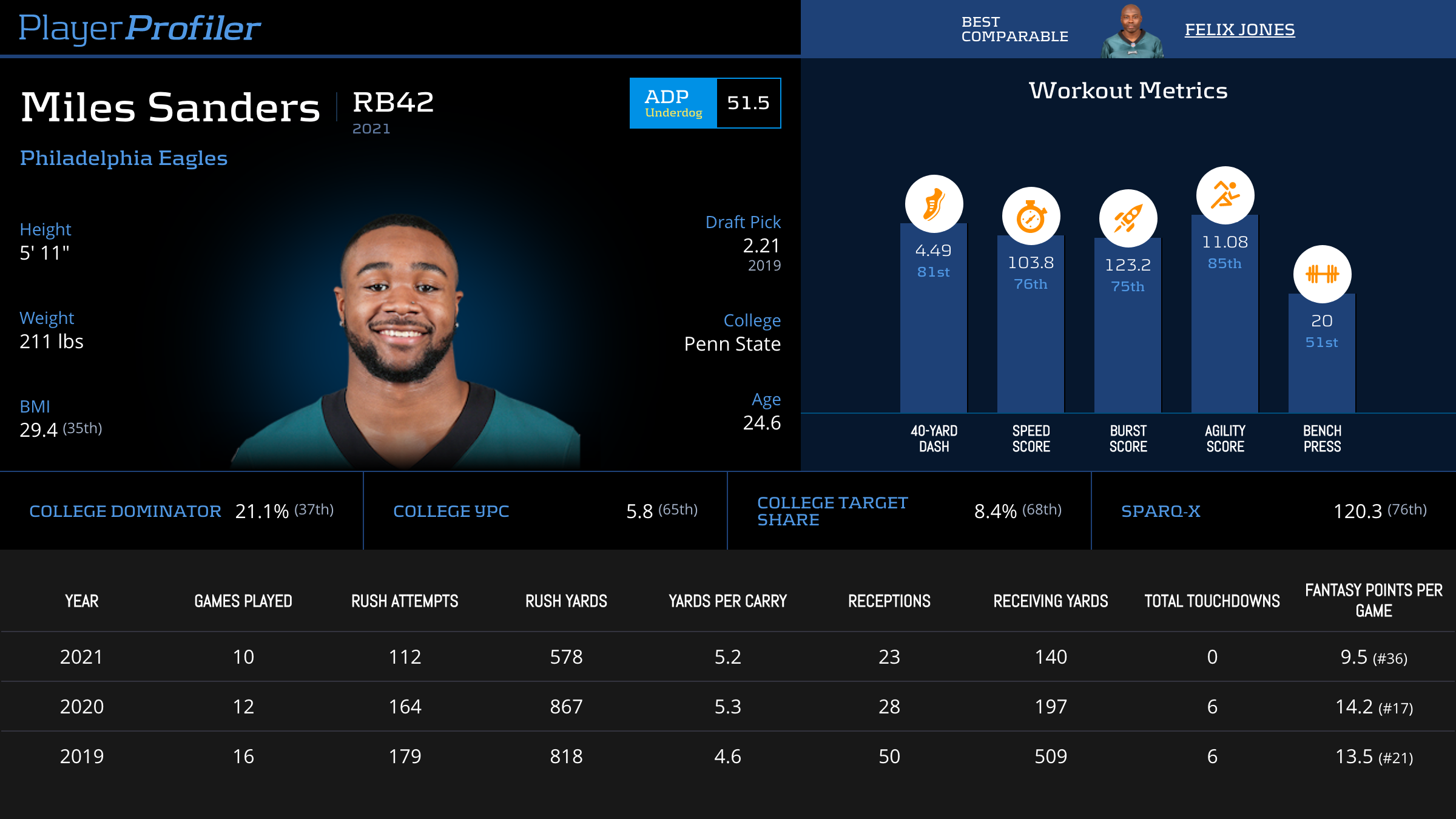 So far this season, Miles Sanders has been an underwhelming fantasy player. He has just two top-20 RB finishes on the season and three games with over 70 total yards. With the Eagles running the ball more lately, his prospects could be looking better, but he faces Washington’s run defense this week. The Football Team has allowed opposing backfields to rush for 100 yards in just two of their last seven games and ranks top-5 in the league in yards per carry allowed. While Washington is susceptible to RB receptions, Sanders entered week 14 with a 9.7-percent (No. 26 among qualifying RBs before Week 14) Target Share. Don’t expect a big game from Sanders for this week of the fantasy playoffs. 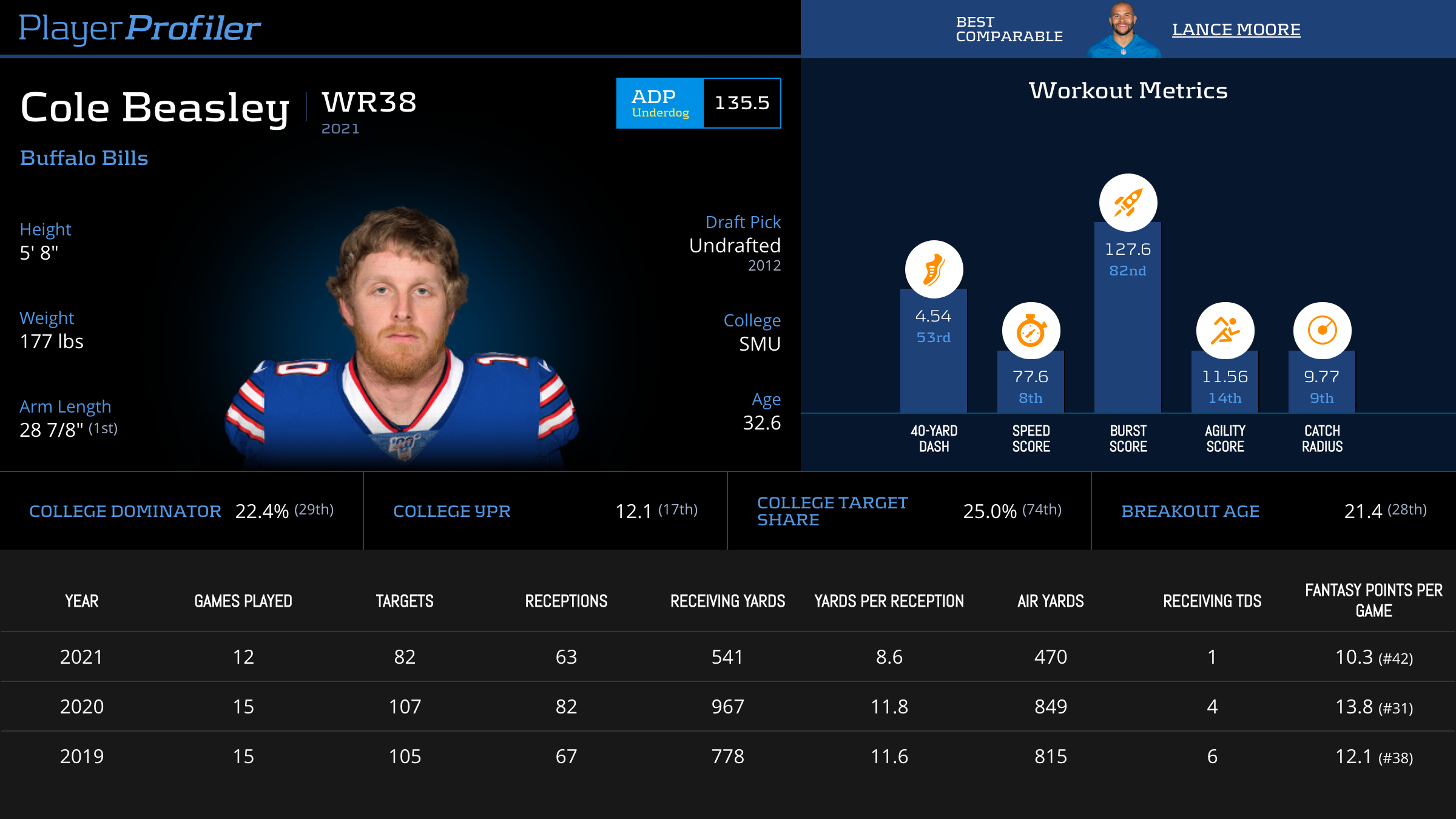 Interestingly this year, Carolina has held opposing WRs in check. The Panthers rank top-10 in the league this season for receiving yards allowed, receiving touchdowns allowed, and yards per reception allowed. They also have three CBs in the top-55 of PlayerProfiler’s CB rankings. While Stefon Diggs is a weekly start, Emmanuel Sanders, Cole Beasley, and Gabriel Davis are more erratic for fantasy. All three have a combined 15 double-digit PPR finishes and 3 top-10 WR finishes, compared to a combined 21 finishes outside the top-50. Beasley is likely the WR you want most out of the trio, but they are too variable to be trusted in a tough matchup against Carolina’s secondary this week. 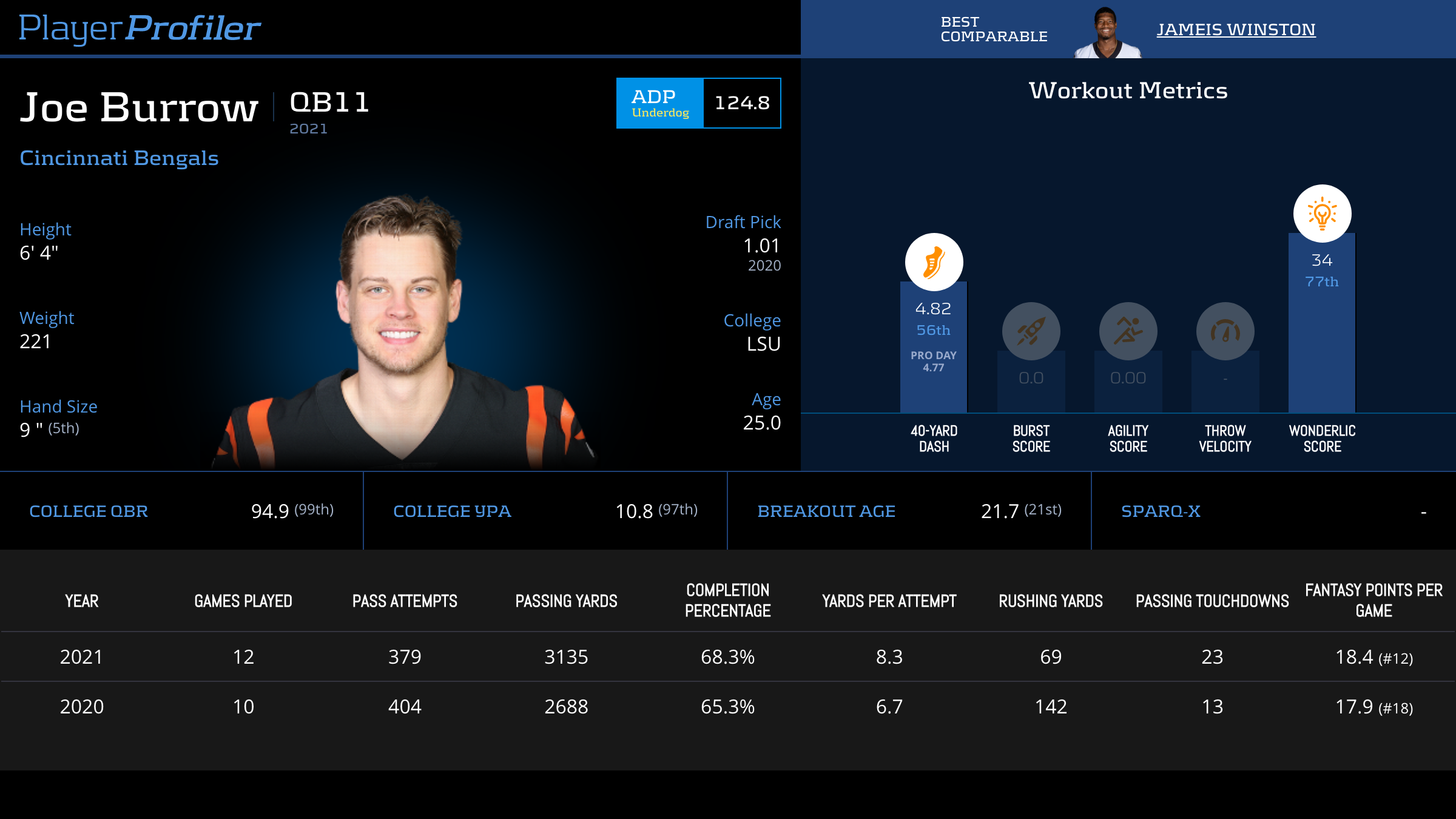 This season, Joe Burrow has been the driving force behind a playoff-contending Cincinnati. However, he may not be a QB for fantasy playoff-contending teams. Burrow has 3 top-10 QB finishes on the year, and does not provide rushing value, not exceeding 20 rushing yards in a game all season.

From Week 7 onward, the Broncos defense has accounted for just 15.0 points allowed per game — third-best in the NFL. Only New England (10.4 PPG) and Kansas City (13.1 PPG) are better in that span.

The Denver defense has been solid against opposing QBs, allowing less than 240 passing yards in four of their last five games, allowing 7 passing TDs to grabbing 6 interceptions in that span. Burrow entered Week 14 with a 7.26 (No. 1 before Week 14) Supporting Cast Efficiency, but a 75.4-percent (No. 34) Protection Rate. Expect Denver to bring the pressure and limit Burrow’s fantasy output this week.