The playoffs are here! Congratulations to everyone still alive in their quest for a fantasy championship. Whether a championship is on the line or DFS advice is being sought, a lot of NFL and fantasy implications ride on this matchup between the Tennessee Titans and Pittsburgh Steelers. Digging deep in analyzing this game is necessary to find the right lineups and underrated gems to advance in the playoffs. Let’s get on with it!

Sunday marked the return to action of the future Hall of Famer Julio Jones. Julio looked like the stud we’ve been accustomed to watching every Sunday, but Tennessee eased him into action. Why wouldn’t they? They did play the rudderless Jacksonville Jaguars, after all, and didn’t need to ask a ton from Jones. Jones played 32 of a possible 70 snaps last week, running 20 routes on 34 Titans dropbacks. However, he did manage to attract six of Ryan Tannehill‘s 31 targets, double that of the next wide receiver on the team. Jones still is averaging 10 Yards Per Target and 2.37 Yards Per Route Run, ranking No. 13 among qualified wide receivers in both categories. Health is the biggest factor for Jones and he’s healthy right now.

With A.J. Brown still on the sidelines, a big Julio week is on the horizon against this suspect Steelers secondary.

After Jones, however, it’s hard to trust any other Titans pass-catching option. If there was another option, my bet would be on Nick Westbrook-Ikhine. He did play the second-most snaps of any Titans offensive player (50 of 70) last week and ran the most routes (28), but turned that opportunity into three receptions and 31 yards on three targets. He’s played at least 67-percent in each of Tennessee’s last three games, had six or more targets in two of the three, and scored above double digits (in PPR formats) in two. For those in deeper leagues and/or desperate situations, there are worse options out there than Westbrook-Ikhine. Outside of him, no other wide receiver or tight end on this team should be in many lineups. 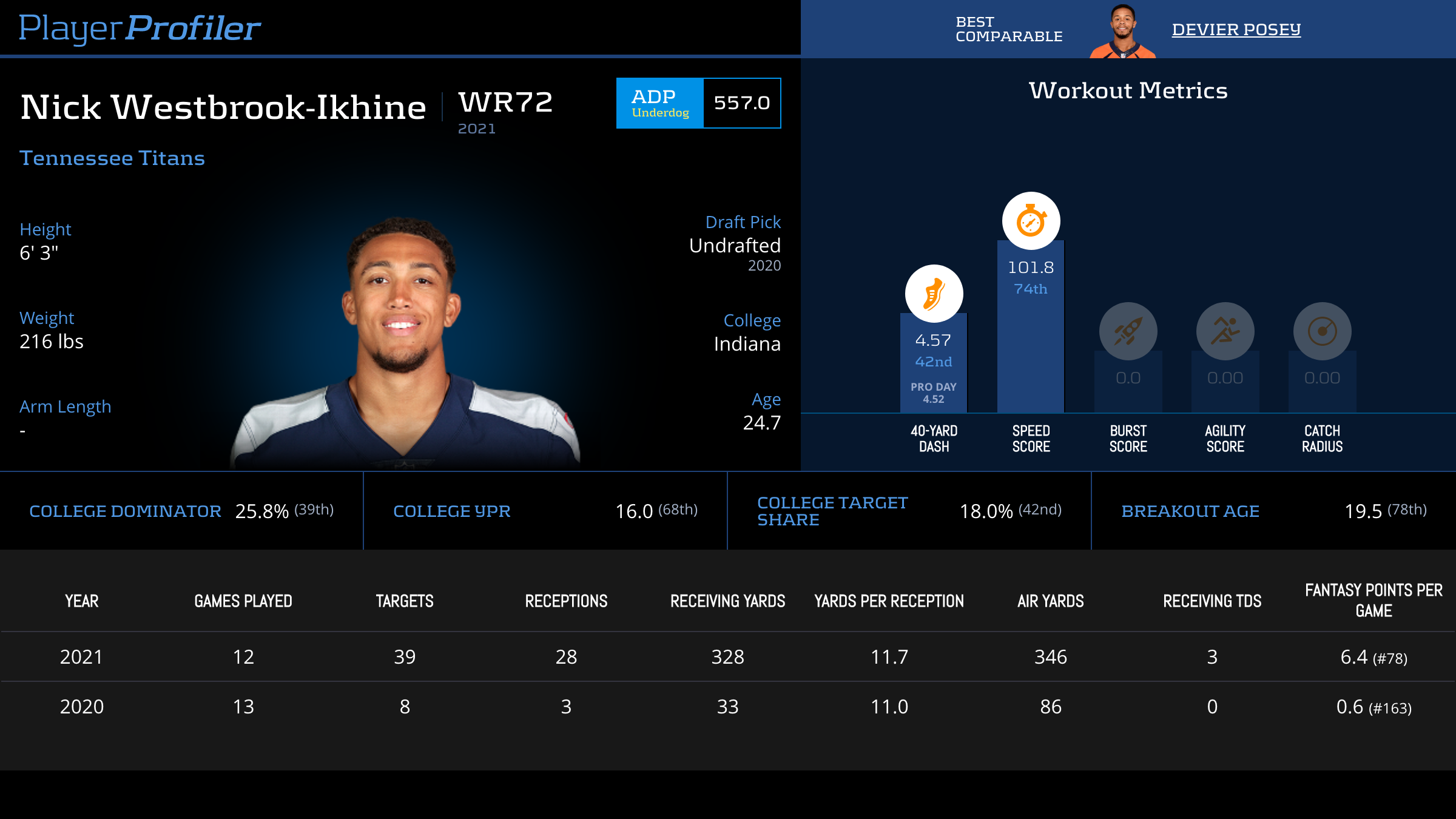 Without Brown and Derrick Henry, the lack of explosive plays has hurt Tannehill’s production. His rushing has kept him viable as an option (he has five rushing touchdowns in his last eight games), but he hasn’t been able to deliver through the air. In that same span, he has eclipsed 250 passing yards three times. He is a fine streaming option this week, but that’s it, and there are other options with better matchups that I’d prefer over him.

He isn’t Derrick Henry, but D’Onta Foreman has passed the test of filling his shoes. For the second consecutive game, Foreman led the way for the run-heaviest team in the NFL. He registered 15 touches; Dontrell Hilliard and Jeremy McNichols combined for 14 touches. Foreman also scored double-digit points for the second consecutive game after he punched in a touchdown from the five yard-line. In fact, he now has 14 (No. 49) Red Zone Touches on the year. Not only is he getting the majority of the work, but he’s been heavily utilized in the red zone as well, which is what every fantasy gamer yearns for from their running back.

Everything is set up for Foreman to smash this week.

It’s possible for Hilliard and McNichols to make an impact as well, but their opportunities will be more limited. Hilliard spelled Foreman for a drive here and there last week, while McNichols mostly subbed in for third-down work until he racked up garbage time carries. It’s a shame the Titans coaching staff has pigeonholed McNichols into a scatback role when I believe he’s capable of doing it more, but it’s clear to see what the Titans think of him. Hilliard busted a big run against the New England Patriots, but if these two are splitting the limited pass-catching role, then neither can be relied upon for fantasy purposes.

What more is there to say about the Steelers? We know Diontae Johnson is going to get fed. He’s drawn less than 10 targets twice all season. He’s No. 3 among qualified receivers in Snap Share, Route Participation, Targets, and Target Share. The Titans defense allows the second-most points to wide receivers this season. Johnson is geared up to be a week-winner yet again.

The same goes for Pat Freiermuth. His targets have dwindled from no fewer than six a game from Weeks 6-11 to no more than four the last three weeks, but the fantasy production hasn’t gone anywhere. A lot of that has to do with his heavy red zone usage. Freiermuth’s 17 red-zone targets rank first (I repeat: first!) among tight ends. That’s where he scored last week and almost scored again on the last play of regulation before having the ball punched out of his hands. Touchdowns are fluky by nature, but less so if a player gets looked at repeatedly around the end zone. Freiermuth is as safe a tight end option out there.

The only question among the Steelers pass catchers is what to do with Chase Claypool.

Everyone got their pound of flesh when Claypool celebrated a first down as time was ticking, but lost in all that noise was that Claypool got targeted! Nine times at that! Thursday Night marked the fourth time all season Claypool hauled in at least five receptions, finishing the night with eight. The matchup this week isn’t as tantalizing as last week’s against Minnesota, but the Titans are another good one for receivers. I like Claypool to double up with another solid performance this week. 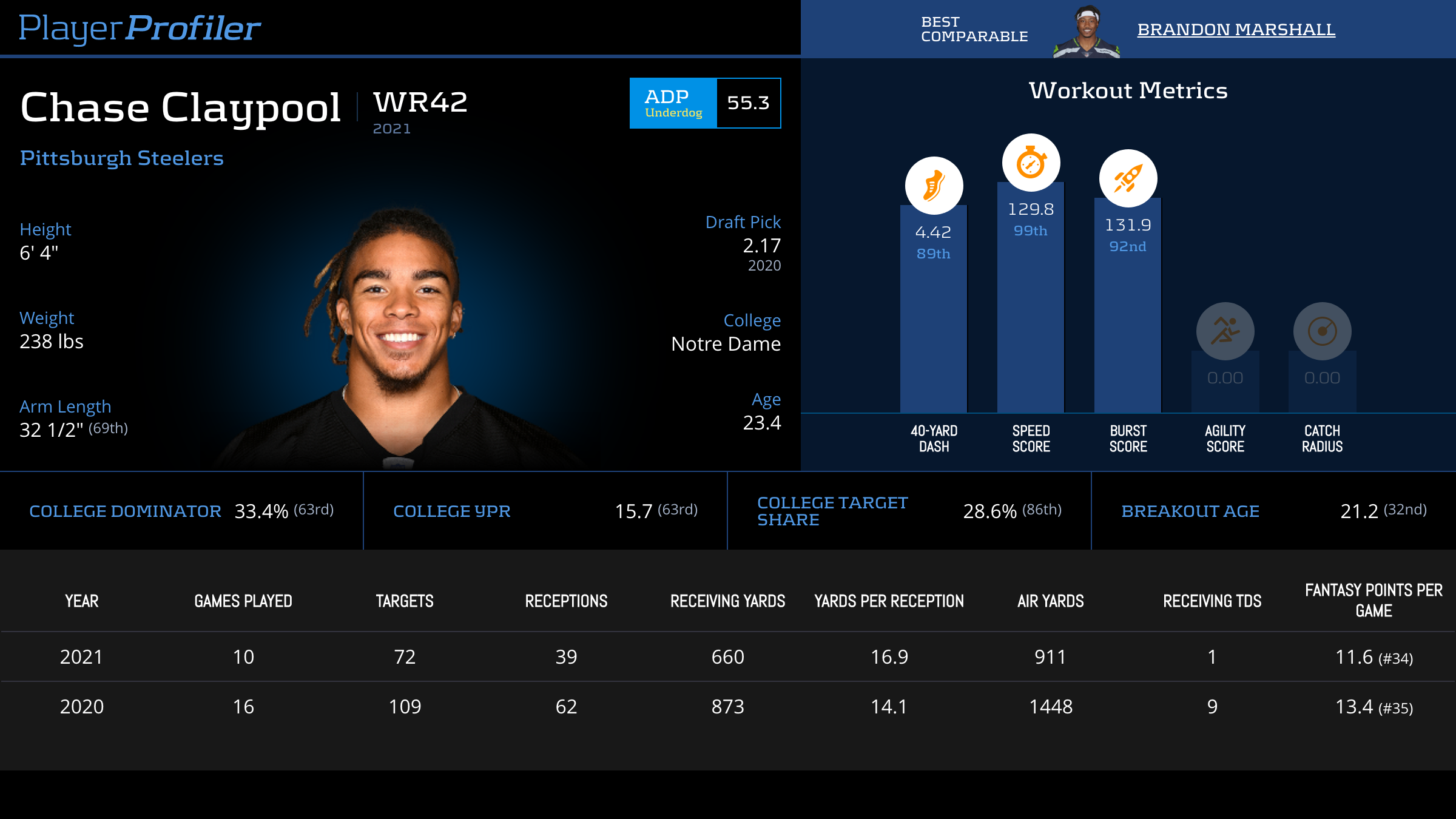 It’s hard to trust Ben Roethlisberger and his noodle of an arm, but he’s still churned out results. The Steelers throw the ball the third-most of any team and it’s because they have to. Despite looking as rusty as ever, Roethlisberger has profited from that volume. Roethlisberger has at least 40 pass attempts in three of his last four games and mustered up at least 19 points in said games. Like Tannehill, there are better options out there, but in a tight spot, Big Ben might still help win fantasy playoff matchups for those willing to get ugly.

Everything is still chugging along on the Najee Harris bandwagon. Harris ranks first among all running backs in Snap Share (85.9-percent), Opportunity Share (87.9-percent), and Weighted Opportunities (260). He’s No. 3 in carries with 237 of them, and second in targets with 75 on the season.

When looking up workhorse in the dictionary, a picture of Harris shows up. You’ve ridden him this far; why stop now?

RB: Najee Harris is unimpeachable. D’Onta Foreman is the man in Tennessee and a great start.

WR: Diontae Johnson is incredibly sturdy. Julio Jones and Chase Claypool are both solid starts. Nick Westbrook-Ikhine can be started if in a pinch.

The Steelers are desperate for a win to stay in the mix for the playoffs. Getting one this week would go a long way to save their season, but I don’t think it will come. Vegas has the Titans as 1.5 point favorites with a 41.5 over/under.