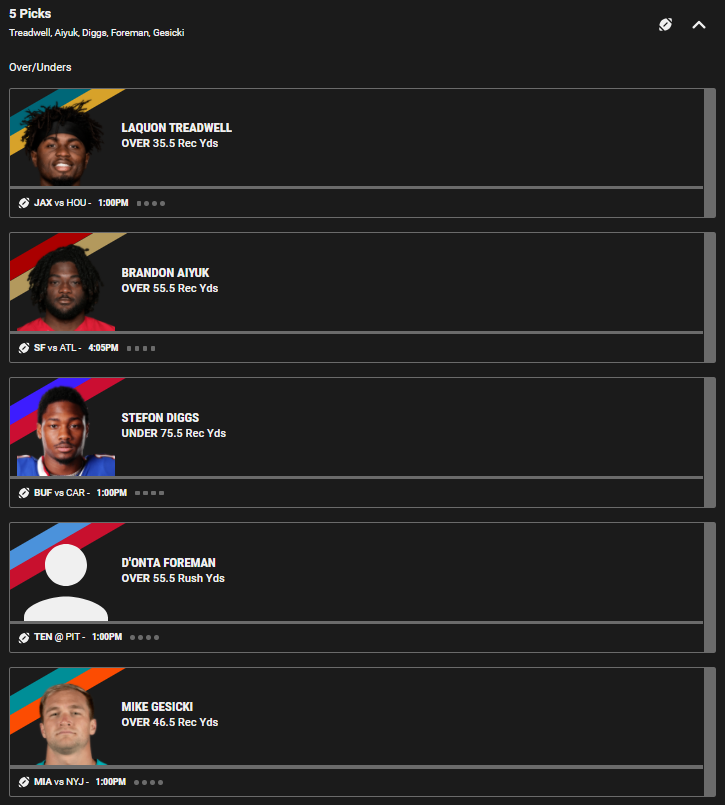 Don’t tread on me for going back to the well on Laquon Treadwell, for I will defend this pick with vigor! Actually, I don’t need to vigorously campaign for this line because it’s simply a low yardage total for a starting wide receiver in a breezy matchup. Treadwell has hit this line in every game since earning starter reps alongside Marvin Jones and Laviska Shenault. He is averaging 4 targets per game and 15.1 Yards Per Reception, so he has a solid chance of hitting this line on half of his projected receptions. PlayerProfiler.com shows that Treadwell will be matched up against Tavierre Thomas (CB 90), further cementing this pick as my Higher than high confidence play of the week.

Jaylen Waddle is on the COVID-19 list, priming Mike Gesicki to smash the OVER on his Underdog Fantasy line this weekend. Gesicki already sees 6.8 (No. 3 among qualified tight ends) Targets Per Game and he will surely benefit from Waddle’s vacated 8.9 Targets Per Game. Consequently, Gesicki’s 25.3-percent (No. 5) Air Yards Share has no where to go but up. He has hit 46 receiving yards in eight out of 13 games this season and he’ll certainly hit the OVER against the Jets on Sunday.

D’Onta Foreman will hit the over because the Titans like to run and the Steelers like to get run on. Unsurprisingly, the Titans roll out 31.5 (No. 1 in the NFL) Team Run Plays Per Game. And the Steelers rank bottom-3 in rushing yards allowed per game. Foreman’s underwhelming 40.45-percent Snap Share in the hodge-podge Tennessee backfield will provide enough opportunity to hit the OVER due to Tennessee’s willingness to stick to the ground game in any game environment.

Underdog Fantasy threw players a bone with this free square line for #teamOVER. Brandon Aiyuk has hit 55 receiving yards in five of his last six games and he will make it six for seven after San Francisco faces off against the porous Atlanta secondary. Starting wide receiver Deebo Samuel saw a season low 1 target last week against Cincinnati, showing that the 49ers are easing him back into the mix. As a result, Aiyuk will continue to flourish as one of the main options in the San Francisco offense.

Everyone has the Bills projected to crush the Panthers today and that can make it tempting to take the OVER on this line. However, Stefon Diggs will find it difficult to produce against one of the leagues best cornerbacks, Stephon Gilmore. A quick glance at Gilmore’s player page on PlayerProfiler.com shows that he has allowed only 2 receptions since joining the Panthers in Week 10. Also, the Panthers as a whole have a top-3 defense in receiving yards allowed. Finally, Diggs has hit the OVER on this line in four out of 13 games this season. Now is the time to hit the UNDER. 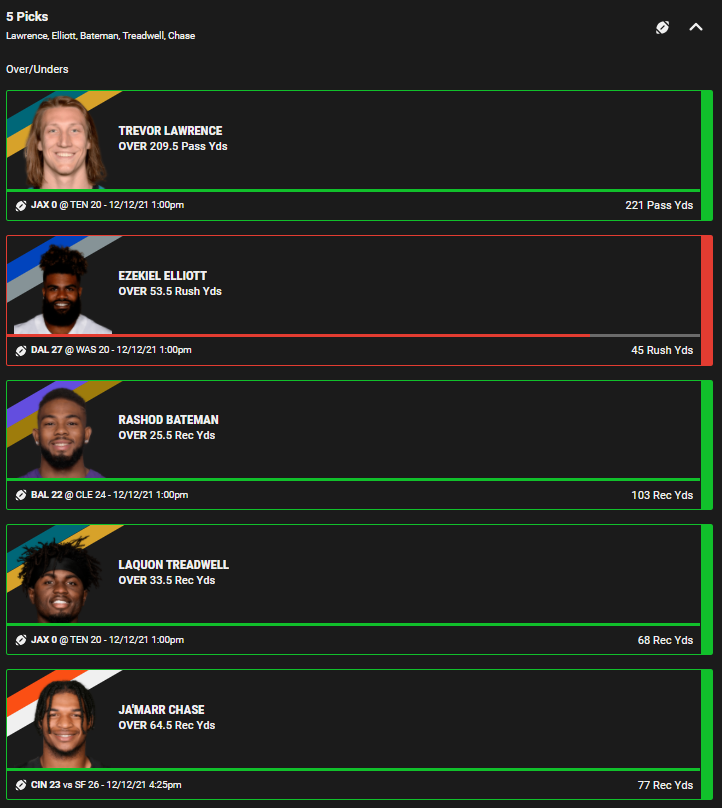 A blowout win by the Titans coupled with a meager 6 rushing yards between James Robinson and Carlos Hyde lead last week’s slip to a strong start.

Victory lapping carries on because Rashod Bateman crushed this line with 8 targets, 7 receptions and 103 receiving yards. Last week I said that his 1 target game was an anomaly and boy did that turn out to be true!

The Jacksonville WR1 continued his hot streak of hitting the OVER on this line in every game since becoming a starter.

Ja’Marr Chase came through for the Bengals in regulation and for this slip with 77 yards of highlight reel catches in Week 14.