We discussed Terry McLaurin last week in this same section. Despite a pretty solid game against James Bradberry and the Giants, DraftKings added only $100 to his salary. He remains modestly priced heading into a matchup against a terrible Cowboys defense.

McLaurin is the only wide receiver of relevance in Washington’s passing game, amassing a 44.2-percent Air Yards Share. While he has yet to convert this opportunity into consistent WR1 production, he is set to explode in Week 7.

The last time D.J. Moore found himself in the Paying Up section of this article was in Week 4, when he was also priced at $5,600. He proceeded to disappoint, scoring only 8.9 (No. 49 among qualified wide receivers) fantasy points. Moore is again priced at $5,600 and will look to redeem himself against a Saints defense that just gave up double digits fantasy points to both Keenan Allen and Mike Williams.

Moore lead the Panthers with 128 Air Yards last week and drew 11 targets to five for Robby Anderson. The two seem to be flip-flopping the 1A receiver role in the Panther’s offense. Regardless, more than enough opportunity is divided between the two receivers to make Moore a great Week 7 DFS play.

D.J. Chark has seemed to disappoint thus far this season despite averaging 13.9 (No. 28) Fantasy Points per Game.  He only has one WR1 week and has generally finished as a WR3 in fantasy when healthy. This has led to him drawing his lowest price of the season entering a Week 7 contest against the Chargers.

Chark is still the go-to wide receiver in Jacksonville, leading the Jaguars in Air Yards Share, and but for missing a game due to injury would likely be leading Jacksonville in Air Yards as well. Coming off a week where he saw 182 Air Yards, Chark is primed for a resurgence.

Cole is the clear second fiddle in Jacksonville’s passing game. He comes off a week where he finished as a WR1 in fantasy, amassing 20.3 (No. 8) fantasy points and seeing more Air Yards (195) than D.J. Chark. Priced at $800 less than Chark, Cole is a fine pivot option for those looking to gain exposure to the Jaguars passing game.

After underachieving for most of the season, Christian Kirk has finally begun to realize some Air Yards. Kirk has finished with double digit fantasy points in each of the past three games, and is coming off a two touchdown performance which included an 80-yard reception. With his matchup against the Seahawks still on the main slate, the ascending third-year receiver is set to smash again in Week 7.

Seeing an Average Target Distance of 17.6 yards, third-highest among qualified wide receivers, Mike Williams is used as the downfield threat for the Chargers. This has led to boom-bust performances thus far. He has finished with less than 4.0 fantasy points in two games this season, and is coming off of a week where he finished as the WR5 overall.

Being a jump-ball receiver, many of the passes Williams hauls in result in painful collusions with the turf. He can be just as painful to start in DFS as a result of his Weekly Volatility. However, his volatility is a double-edged sword, allowing for boom weeks similar to what he saw last week.

The Patriots passing game is struggling, dragging down Julian Edelman along with with. The veteran wide receiver has failed to crest 7.0 fantasy points in each of the past three weeks. That said, unlike most of the 30-something wide receivers to make the Value List, Edelman has shown that he is not washed, previously posting 25.9 fantasy points and finishing as the WR3 for Week 2. 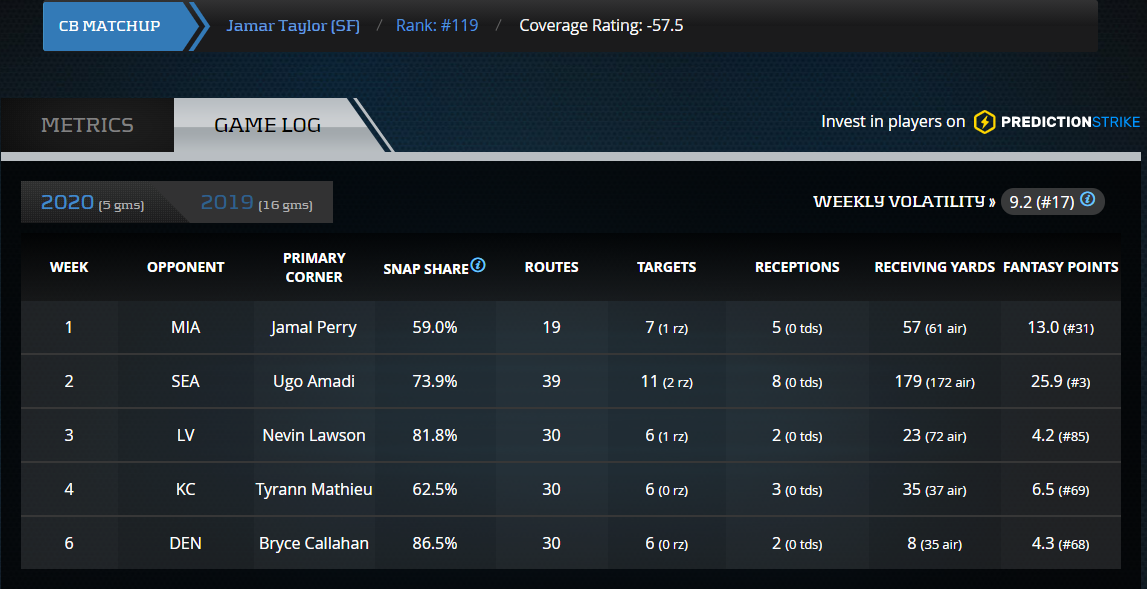 With Cam Newton on the mend from COVID and able to practice, New England’s passing game will have to eventually get on track. It may happen as early as this week against a low-key exploitable 49ers defense.

Tim Patrick is currently the WR1 on the Broncos. The undrafted veteran has scored double digits fantasy points in each of the past three games, including back to back top-24 finishes. He has also seen 294 Air Yards compared to first round pick Jerry Jeudy‘s 145 Air Yards over the past two weeks.

Set to face the Chiefs in a game that will likely shoot out, Patrick is the ideal correlative stack for anyone looking to jam Patrick Mahomes, Travis Kelce, and Tyreek Hill into their lineups.

Damiere Byrd appears to have overtaken former first round wide receiver N’Keal Harry in the Patriots wide receiver target pecking order, out targeting Harry 14 to eight over the past two weeks. He has also led New England with 229 Air Yards during that same time.

Despite elite 4.32 (99th-percentile) Forty-Yard Dash speed, Byrd has not been utilized heavily downfield with only five (No. 43) Deep Targets on the season. However, assuming he is able to continue to see this type of volume in the Patriots passing offense, it is only matter of time before he uses his speed to break away for a huge play.

The idea that Cincinnati’s WR1 is still priced below $5,500 is insanity. I look forward to the day that Tee Higgins is no longer on this list because it means that he’s received the respect he deserves. Until that day though, the rookie wide receiver remains a huge value in DFS.

Higgins comes off a game where he finished with 18.7 (No. 11) fantasy points against a tough Colts Defense. Not sure what else he needs to do at this point to be priced above $5,500, but DraftsKings’ inability to recognize his talent is our gain.

Andy Dalton‘s relief of the injured Dak Prescott did not bode well for Michael Gallup in Week 6. Gallup, despite multiple red-zone targets, finished with only 4.3 (No. 68) fantasy points. While the third-year receiver finished third among Cowboys receivers with 65 Air Yards, he is still seeing enough opportunity thanks to the Cowboys defense keeping the offensive in pass favorable Game Scripts. While Gallup appears to be a fade in Week 7, set to face off against a stingy Washington defense, he has scored double digit fantasy points in every week he has appeared on this list. Trust the process.

Marquez Valdes-Scantling is the clear number two option in the Packers passing game behind Davante Adams. However, he has seen more Air Yards in the two full games the receivers have played together thus far this season.

With an 18.9 (No. 2) Average Target Distance mark and 12 (No. 5) Deep Targets, Valdes-Scantling is the go-to receiver for the bulk of Aaron Rodgers‘ downfield bombs. He is bound to find the ball in his hands at some point, and he will win someone a GPP when he does.

Good luck to everyone in Week 7. May all your Air Yards be realized.