My name is Aditya. I’m ashamed to say, as of this writing, I’ve only drafted Saquon Barkley once in redraft leagues this year. Barkley’s fantasy value has been on a rollercoaster ride this season. Uncertainty about his injury timetable has led to a fall. A recent return to practice has raised his draft position just a bit.

His ADP is not high enough. Saquon is an EXCELLENT value at his current season-long league ADPs.

In Week 2 last season, Saquon Barkley suffered a torn ACL, along with meniscus and MCL injuries. His timeline for return has been slow, and the Giants are being cautious with his injury. A torn ACL isn’t exactly an uncommon injury to return from. However, with Barkley still under 25 and with several years ahead of him, New York may be trying to preserve him.

The Giants expect Saquon Barkley to pass his physical today, be activated off the physically unable to perform (PUP) list and begin practicing with team, source confirms, as @NYPost_Schwartz reported.

Encouraging development for Saquon on the road back from ACL surgery.

In the past, many players have returned from similar injuries. Adrian Peterson is the biggest case of success. Peterson tore his ACL and MCL in 2011, then returned the following season looking excellent. According to Pro Football Reference, Peterson rushed for 2,097 yards on 328 carries in 16 games. He totaled 2,314 yards from scrimmage and 13 touchdowns. Peterson was an All-Pro and Pro-Bowler in this 2012 season. While this is a best of the best example of injury return, Barkley is one of the best of the best. He is an athletic freak of nature and a top-tier NFL athlete. It is well within his range of outcomes to at least return to Pro Bowl form.

Other major successful returns from ACL and MCL injuries include Rob Gronkowski from 2013, and Tom Brady in 2008. Even Willis McGahee from 2003 is an example of success coming off a major knee injury. NFL players can return to form from major knee injuries.

26 days till NFL kick off brings you: Saquon Barkley
– My #2 RB in my rankings
-coming back from ACL tear from week 2 of 2020
– more weapons around him=more scoring opportunities
– #8 running back in auctions going for $42… I’m buying!@loadedbox @MyFantasyLeague pic.twitter.com/L6ZVQ4nF2K

Barkley is likely to be eased back into action at the beginning of the season. Devontae Booker will get a sizeable share of rushing opportunities to start with. Daniel Jones will also see some rushes, but expect Saquon to take back the lion’s share upon full return.

Why His Value Fell

Let’s talk about why Saquon Barkley has fallen in drafts. Due to uncertainty around his injury timetable, many fantasy managers are torn on his value. Can he still be explosive? Barkley had an 88.7-percent (No. 3 among qualified running backs) Opportunity Share the season before getting hurt in 2020. With the severity of his injury, many are questioning his ability to return to a bell-cow type workload and produce with similar efficiency. Fantasy managers are fading him out of caution that he will return closer to a Jay Ajayi level of explosiveness, rather than a Dalvin Cook level.

A part of fantasy managers’ worry is his slow return. He was initially supposed to return to practice earlier than he did. News kept breaking that he would take it slow and would not be rushed back.

I’ve never seen so many tweets predicting FF dominance for a player expected to begin practicing two weeks later than what was originally expected at the time of injury.

Additionally, fantasy managers are worried that he will not hold up against a leaky Giants offensive line. While he has had success with bad o-lines before, taking extra hits contributes to worries about his injury recovery. A struggling and inexperienced offensive line negatively impacts not only the run game, but the pass game. Barkley is a significant part of the Giants’ passing game, so a dent in passing efficiency is a dent in his production.

Why am I seeing #Giants fans enraged by PFF ranking the offensive line last heading into 2021?
It's an unproven unit w/ minimal Rd. 1 draft capital (Thomas) invested into it + no depth at any position.
We hope coaching + progression happens, but that's also true for all 32 teams.

All of these worries have led to a decrease in Barkley’s value. However, he is still an A-class athlete. Even if he does not get a full bell-cow workload initially, his receiving and physical abilities will give him RB1 fantasy relevance.

It seems forgotten that Saquon Barkley has one of the best athletic profiles of a running back in recent years. 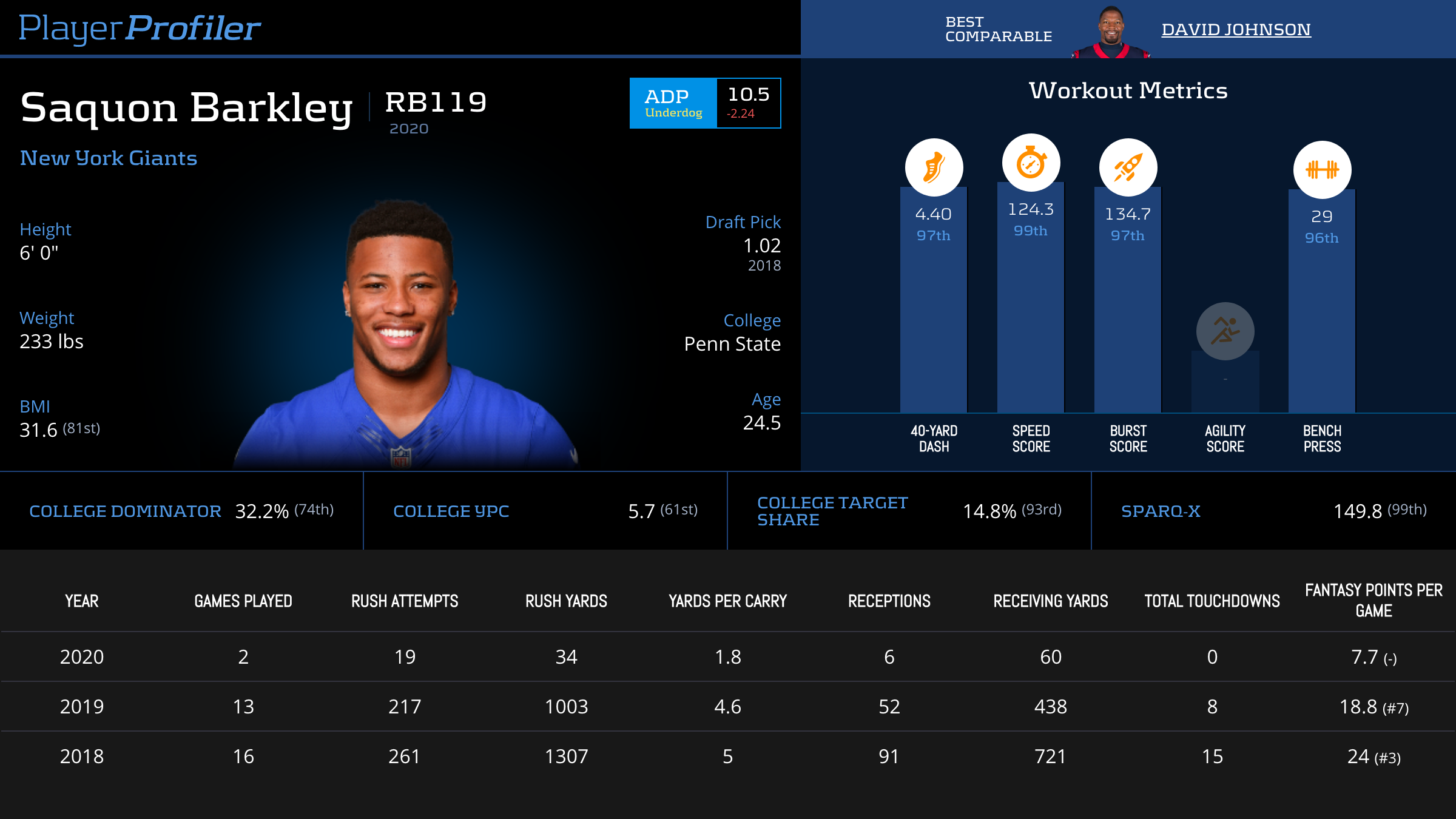 Barkley ranks in the 96th-percentile or higher in PlayerProfiler’s listed workout metrics, except for an unrecorded Agility Score. He has a 149.8 (99th-percentile) SPARQ-x score and a 32.2-percent (74th-percentile) College Dominator Rating, showing his all-around abilities as a young back still on his rookie deal. He even has the No. 1 Breakout Rating of all time on Breakout Finder.

.@saquon’s elusiveness is next level ?

Barkley uses his speed to elude tacklers and create yards in the open field. He had at least 1.87 (top 10) Yards Created Per Touch in both the 2018 and 2019 seasons. In 2019, he impressively accomplished this feat with a 63.2-percent (No. 47) Run Blocking Efficiency. The New York Giants’ offensive line struggled to get Barkley holes to run through, so he created his own yards. Despite the offensive line’s shortcomings, he still finished with 18.8 (No. 7) Fantasy Points Per Game in 2019. His talents are among the best that the NFL has seen in recent years. Do not waste them by letting him fall in drafts.

Compared to Other Top RBs

The most common RBs being taken before Saquon Barkley: Christian McCaffrey, Dalvin Cook, Alvin Kamara, Derrick Henry, and Ezekiel Elliott. While CMC is the de facto first overall pick, Barkley has the ceiling to be taken over the others. Cook and Kamara have the strongest arguments out of the non-CMC group to be taken over Barkley. Both have pass-catching ability, efficiency, and are the definitive RB1s on their respective teams. Barkley has a better physical profile than both, but it is arguable that Cook and Kamara are safer and similar-ceiling players relative to Barkley.

The best of the best ? pic.twitter.com/Vh2gMiLG9B

Moving past those top three, Henry is also commonly taken before Barkley. Last season, Henry ran for 2,027 (No. 1) rush yards and scored 17 (No. 2) total touchdowns. Despite this stellar rushing production, he had a 20.7 (No. 3) Fantasy Points Per Game average. At a ceiling performance of a 2,000-yard rushing season, Henry finished third in PPR. He had just 19 (No. 46) receptions and a 78.5-percent (No. 4) Opportunity Share. Barkley had a higher Opportunity Share and nearly three times as many receptions in 13 games in 2019.

Henry’s ceiling is limited as a non-receiver, and Barkley has more upside.

I would take 15 weeks of Saquon Barkley over 17 weeks of Derrick Henry https://t.co/wuaxwnTbpU

Ezekiel Elliott is the other back often seen selected above Barkley in most formats. Elliott is a formidable receiver, but is inefficient. In 2020, he averaged 4.4 (No. 51) yards per touch and 3.9 (No. 53) True Yards Per Carry. He also put up just 0.7 (No. 104) Fantasy Points Per Opportunity with 14.9 (No. 14) Fantasy Points Per Game. His fantasy value is more reliant on his volume rather than efficiency. For both Elliott and Henry, wear and tear can catch up to them. Both have more than 1,100 career carries, far more than Barkley. Despite his injury, Barkley’s legs are fresher than Elliott and Henry’s.

?: if you were fading Barkley before, you should keep fading

?: why were you ever fading Saquon barkley lmao

Draft Him Before His ADP Rises

For Underdog Fantasy, Saquon Barkley has an ADP just outside the top 10. In redraft leagues across various sites, he is going in the 5-7 range, an ADP that makes more sense for SuperFlex leagues.

In any league that rewards receptions, Barkley should go higher than backs like Derrick Henry and Ezekiel Elliott, in at least the top 4 RB range. He has the upside and ceiling to finish as THE RB1, like he did in 2018.

Target Saquon Barkley as an absolute VALUE in your league.