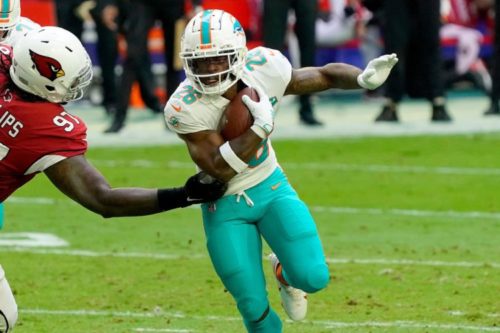 The NFL Regular Season is flying by with 10 weeks already in the books. Fantasy teams are starting to clinch playoffs, and others are eliminated for good. With many trade deadlines behind us, the waiver wire is your only options for getting your squad in shape down the stretch. Luckily, Player Profiler’s advanced stats and metrics can help you identify tomorrow’s breakouts today.

Salvon Ahmed‘s 21 carries for 85 yards and a touchdown in Week 10 cannot be ignored in the new look NFL that is devoid of workhorse backs.

Ahmed is slotted in as the direct replacement for Myles Gaskin and is an ideal RB2 to help you with your playoff push, especially with Jordan Howard now out of the picture. Don’t overthink it.

La’Mical Perine‘s biggest flaw is that he plays for the Jets. This offense has started to gain traction with some touchdown upside over the last few weeks. A potential high-scoring affair against the Chargers helps fantasy managers gain some confidence with this one.

The upside here includes Perine’s workhorse profile and the coaching staff’s public declaration that he will be the team’s workhorse. He is the ideal candidate to be tomorrow’s RB2 du juor, so get him today.

Cordarrelle Patterson truthers are parading in the streets after a breakout performance on Monday Night Football. Matt Nagy is forced to deploy his all-purpose weapon (to the teams benefit) with no other options in this backfield.

A Week 10 bye limits Patterson’s immediate upside, but stash this guy for Week 11 and beyond.

Rex Burkhead belongs on a football field, plain and simple. He is building a case to belong in fantasy lineups as well. The Patriots backfield is a complete mess with multiple runners involved and Cam Newton hogging all of the overall low touchdown upside. Still, Burkhead has solid passing game and red zone involvement. You can do worse at flex.

Cam Akers led this backfield in Week 10 touches despite an overall murky situation. Darrell Henderson will continue to be involved and Malcolm Brown refuses to fade into irrelevancy, but Akers has elite upside if given opportunity. He belongs on the end of your bench and even in the Flex if you’re desperate.

Carlos Hyde is the upside play of the week with a projected competitive game against Arizona and a chance to earn significant touches. Though Seattle has turned into a pass-first team, rookie DeeJay Dallas has been losing his grip on the starting job in recent weeks. If Hyde finds the endzone this week, he’s likely to return RB2 production at value.

Michael Pittman‘s 15 catches for 157 yards over the last two weeks are encouraging for the second-round pick.

T.Y. Hilton remains banged up and the running game is in flux for a Colts team that is battling for a Wild Card spot. They should be airing it out in the weeks ahead, and targets will continue to come Pittman’s way.

Jalen Reagor led the Eagles with seven targets against the Giants this past week. This team looks bad right now, but they pay in a soft division and will score points. Reagor has a strong chance to become the next breakout rookie receiver.

David Moore is the next man up in Seattle’s high-octane offense after Tyler Lockett was declared questionable with a knee sprain.

If Lockett is out, get excited for Moore, who has flashed big play potential for years when tethered to Russell Wilson.

Josh Reynolds has eight or more targets in each of his last three games. That kind of volume warrants starting consideration while playing for a competitive Rams team.

After Week 11, Reynolds’ upcoming schedule includes potential shootouts against the 49ers, Cardinals, and a Week 16 game against the same Seahawks team he just tagged for eight catches and 94 yards. Stash him now.

Jakeem Grant is the deep threat in a booming Miami offense. The once fantasy-unfriendly Dolphins offense have become a mecca of unexpected fantasy producers.

Jakeem Grant is the next man up following another Preston William’s Injury. pic.twitter.com/viOTcpFmhQ

Cash in on your lottery ticket now and toss Grant onto your bench.

Tim Patrick continues to be a featured weapon for a Broncos team that is constantly digging themselves out of holes. The touchdown upside is limited and Lock has injury concerns, but Patrick is a viable Flex play, especially in deeper leagues.

Marvin Hall continues to produce in Kenny Golladay‘s absence as Detroit’s de facto deep threat. His Week 10 upside was entirely generated off one big play, which isn’t promising for the long term, and Matthew Stafford is banged up a bit. Regardless, fantasy gamers can squeeze one more productive performance out of Hall with a juicy Week 11 matchup against Carolina’s soft secondary.

Famous Jameis is back! Jameis Winston is in line to start with Drew Brees dealing with multiple injuries. In any given week, Winston’s range of outcomes is anywhere from QB1 on the week to QB32. Though a matchup against the Falcons, a Sean Payton playbook, Michael Thomas, and Alvin Kamara equals a recipe for fantasy success.

I am ready to ride the roller coaster one more time with this volatile big play quarterback.