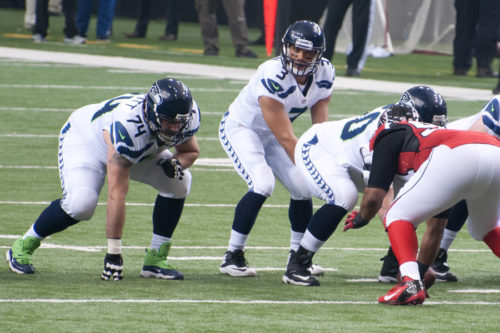 Fanduel split the Wild Card Round into two slates, Saturday and Sunday. We’ll go position by position with a look at the tournament and cash strategies for each slate. Here we’ll look at the Sunday slate. Be sure to check out the Saturday Breakdown as well.

The Sunday slate features the two highest totals of the weekend, so the cash options at quarterback are much more bountiful. However, Russell Wilson ($8,200) is the only one with a rushing floor. Wilson ended the 2019 regular season with 75 (No. 5 among qualified quarterbacks) carries, 13 (No. 8) red zone carries and 342 (No. 6) rushing yards. His rushing yardage total is more than all of the other passers who will start on Sunday combined.

Did we mention he’s a god at passing the football?

Between his rushing production and passing efficiency, there are too few ways for Wilson to fail to not play him in cash.

Quarterback scoring is generally grouped tightly between all passers not named Lamar Jackson, both low and high priced. The same can’t be said for ownership. Drew Brees will be a massive chalk play, with Russell Wilson not too far behind. That leaves us with two passers, and the Eagles skill-position unit is more of a graveyard than a professional football squad.

That leaves Kirk Cousins ($7,700). Cousins also plays in the game with a higher total (49.5) on Sunday, and the Saints/Vikings total has come up 2.5 points since opening. The Eagles/Seahawks game has come down a point. Unique stacks with high ceilings start with Cousins.

The Saints have been a favorable matchup for opposing passers–allowing 2.19 fantasy points above the mean (No. 9) to the position–because they’ve been an easy team to score on, particularly at home. New Orleans has allowed 21.3 points per game this year, but that number jumps to 22.9 when they play at home.

Playing tournaments doesn’t have to be hard. Games in New Orleans score points, loads of them.

Dalvin Cook ($8,200) and Alvin Kamara ($8,400) are both quality options at running back in cash, but one of them sees 21.6 touches per game and 3.6 of those come inside the opponents 20. The other player is Kamara. The debate between the two is much closer on DraftKings, but Cook is the clear cash game back on FanDuel.

Cook sees more carries and red zone looks, both of which are more valuable when receptions net half as many points.

The Vikings gave Cook three weeks to get healthy and he reportedly could have played in Week 17 if it was necessary. Playing both Kamara and Cook in cash is great but if you can only have one, a fresh-legged Cook is the move.

Low ownership on small slates is rare. Any player with a pulse who will see less than 15-percent ownership has to be looked at, to say the least. Because Marshawn Lynch ($5,900) and Travis Homer ($6,100) are unknown quantities, both may end up being low-owned backs. This is in spite of the fact that Seattle rushes the ball more than almost any other team, and they do it well:

One of Lynch or Homer will be the key to winning the Sunday slate, and we lean Homer. Lynch only saw two more carries than Homer (12 to 10) and he was not targeted once. Homer saw five targets and caught all of them.

The Saints have an implied team total of 28.75 points. No other team playing this week has an implied total over 24.5. We have to have at least one Saint in our lineups, and multiple would be ideal. Capture as many points as possible with New Orleans players.

The best part about rostering Thomas is his massive 32.0-percent (No. 12) Dominator Rating combined with his comically high floor. If the Saints offense pops off, we’re going to capture a third of the fantasy goodness with Thomas. If they don’t, he hasn’t been largely affected. Before a meaningless Week 17 game versus the dead Panthers, he had a single game below 12 FanDuel points. That’s a higher floor than Christian McCaffrey.

Tyler Lockett ($7,300) is a fringe cash play but most definitely a priority for tournaments. This season, Lockett battled through illness and a deep thigh bruise. He scored 19 PPR points over a four-game stretch from Week 10 to Week 14. Including this stretch of games where dragged his own lifeless and decaying body onto the field for our entertainment, he has still been a red zone fiend. In that part of the field, he’s managed 17 (No. 2) receptions on 23 targets and 127 snaps with a 73.9-percent Catch Rate.

No matter how we slice it, Lockett is one of the best, most used receivers in the red zone. This week, he faces an Eagles secondary that is the third-easiest matchup for wide receivers. Philadelphia allows opposing receivers to score 5.17 extra fantasy points above their season averages.

The Seahawks are quietly extremely thin at wideout. They’re without Josh Gordon and Jaron Brown this week for sure. Malik Turner has not practiced as of Wednesday while dealing with a concussion. Let us re-introduce you to David Moore ($4,700).

Moore has a phenomenal profile and a path to becoming Russell Wilson ‘s clear third receiver. He’d be a lock in both cash games and tournaments if Turner is ruled out.

Tight end is a brutal position until the team’s with bye weeks join the slate in the divisional round. Jared Cook ($6,700) is as safe as they get until then. Let’s just continue to soak up Saints points here. Cook’s season is broken up by an ankle sprain but his efficiency numbers illuminate a dominant fantasy season:

Zach Ertz is dealing with cracked ribs and a lacerated kidney. He did not play last week and Dallas Goedert ($6,600) was the most owned tight end. This slate has a quarter if the games and no great plays at tight end. If Ertz can’t play, Goedert will be comical levels of chalk.

The blueprint for Goedert chalk week was set a few days ago when Joshua Perkins ($5,100) outscored him by 4.5 points. Goedert played every snap and saw 10 targets. He’s a great play when Ertz is out. However, Perkins took the field for 78.4-percent of the Eagles’ snaps and was targeted six times. Lots of variance goes into those targets, and all it takes is one touchdown swing for Perkins to put up more fantasy points than Goedert, who will still be upwards of 10 times as popular. This is the type of leverage that tournament players dream of.

The Vikings/Saints game features a rising total that’s shown no signs of slowing. The Seahawks/Eagles game is expected to be quiet by comparison. Seattle ($4,100) are 1.5-point favorites, and Philly put up a whopping nine points the last time these two teams faced off.

The Eagles are also dealing with a rash of injuries. Miles Sanders is expected to play through an ankle sprain while Zach Ertz‘s odds of playing through his kidney laceration seem less likely. Without their top receiver and a banged-up Sanders, it will be hard for the Eagles to put points on the board.