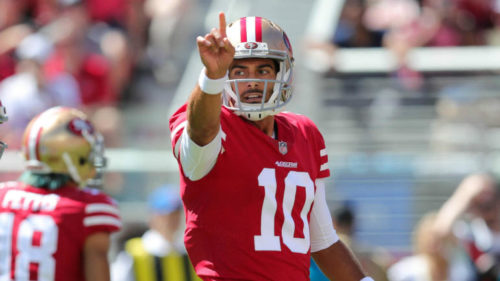 Last week, Fanduel split the weekend into two main slates and later corrected that mistake by opening one large slate. They made all three slates available this weekend, but we’re only focusing on the two Saturday games here. Feel free to combine both of these articles like a non-copyrighted version of some gems and a glove that bestows great power upon the wearer.

The pricing is pretty soft on Fanduel and Lamar Jackson ($9,500), in addition to his propensity to throw touchdowns, infuses lineups with the upside usually reserved for elite running backs. He set quarterback records with 1,206 rushing yards, 176 attempts and five 100-yard rushing games. He’s gone over 40 yards on the ground in all but one game. Fortunately, that game was one of three where he threw five touchdown passes.

The tournament options on Saturday are pretty brutal. Ryan Tannehill and Kirk Cousins both travel to face teams coming off extra rest. Each of their opponents also has a top-five DVOA defense. Instead of flying into the headwind, pivot to the only other option on the slate, Jimmy Garoppolo ($7,900).

The 49ers have the second-highest team total of the slate at 25.5, and Garoppolo has shown a decent amount of upside this season. His three games with four passing scores are second only to Lamar Jackson.

Jimmy GQ was a top-10 passer in 2019 by a number of advanced metrics. Most importantly, he’s the No. 1 Deep Ball passer by completion percentage among qualified quarterbacks, an important skill for tournament-winning signal callers to possess.

Receptions are valuable, but not that valuable, especially in this Ravens offense. Edwards, the grinder on a team that’s a 10-point home favorite, is a free square if Ingram sits.

Ingram has been the team’s go-to back when active, as long as their opponents keep the game close. He’s a modest value at his price if he does end up playing.

Raheem Mostert ($6,800) is the lead back for a 7.5-point home favorite and still may end up the least popular starting running back on a slate with four teams. He’s seen double-digit carries in each of the past five games and has scored a touchdown in six straight. Tevin Coleman and Matt Breida have peaked at six and seven touches respectively over the previous five. Mostert is possibly the only way to roster low-owned running back touches on Saturday.

Deebo Samuel ($6,600) is a better bet than Emmanuel Sanders ($5,800) from a raw projection standpoint, but the price discrepancy between the two is not warranted. Since Sanders joined the 49ers, he has put up 607 Air Yards on 53 targets compared to Samuel’s 455 Air Yards on 59 targets.

This also includes targets from the San Francisco’s overtime loss to Seattle, where Sanders exited with an injury in the fourth quarter and Samuel went nuclear. Sanders is $800 cheaper and the volume is equivalent.

We’re not looking to be as price-sensitive in tournaments, so Samuel is the better option there. His rookie year efficiency has been too good to overlook, with 0.55 (No. 13 among qualified wide receivers) Fantasy Points Per Pass Route and 2.31 (No. 5) Fantasy Points Per Target.

Stacking doesn’t get much easier than this. There are two low-owned (for a two-game slate) and hyper-efficient players on Saturday. They play in the same game and share the same (last) name: A.J. Brown ($7,500) and Marquise Brown ($5,300). Both were horrendous the last time we saw them, with Marquise putting up 15 yards on two catches in Week 17 and A.J. catching one ball for four yards in the WildCard round. They’ll be less popular this week as a result, which will happen when the name of the game is catch two deep balls or go home with next to nothing.

Hollywood gives us access to a Lamar Jackson ceiling game without having to pay up for him, and the Titans should be throwing frequently with Vegas having them as 10-point dogs.

Tight end is a desolate wasteland and doing anything other than paying up is difficult. We’re willing to eat the chalk on George Kittle ($7,300) in all formats. San Francisco’s 25.5-point implied team total is second only to Baltimore, but Kittle’s ownership of those points is higher than any non-QB on the Ravens. He achieved a 26.5-percent (No. 3) Dominator Rating in spite of his lackluster and fluky 5.9-percent touchdown rate. Few offenses run through their tight end more than the 49ers. He’s a must-play.

His ownership will be sky-high, but the work-around for this is simple. Getting different with a Kittle lineup is easy and correlated when also rostering Jimmy Garoppolo, who will come in at low ownership.

Baltimore ($4,800) faces the lowest team total of the slate (18.25) and faces an offense that allowed sacks at a higher rate than any other team this year. Tennessee passers were sacked on more of their dropbacks than any other team, and Marcus Mariota did not skew that number. Ryan Tannehill enters the week with a 9.8-percent sack rate, second in the league.

On a tiny slate like the single-day playoff ones, it’s not a bad idea to play one player into the opposing defense. It’s hard to avoid sometimes. That leaves a Baltimore Defense-Marquise Brown–A.J. Brown stack on the table. However, we still tend to shy away from that situation when possible.

This brings us to the 49ers ($4,600) because they’re less expensive and will likely end up lower-owned that Baltimore. This is a particularly sharp play when we don’t stack 49ers, but instead run their defense back with Raheem Mostert.

The 49ers are a top-five defense by DVOA and the No. 1 defense by yards per play allowed (4.7).  With no strong reason to play one of the large underdogs at defense, this is as different as we should be willing to get.