In the Red Corner: Travis Etienne, In the Blue Corner: Najee Harris 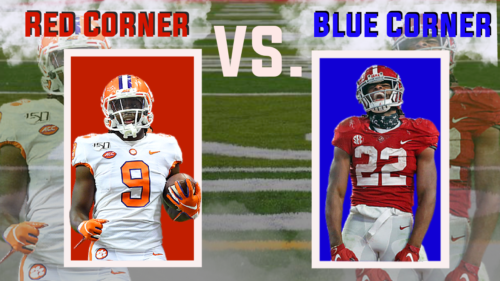 Introducing first, in the RED CORNER: hailing from Clemson University, standing in at 5-10, and weighing in at 215-pounds: “HEAT LIGHTNING” TRAVIS ETIENNE.

His opponent, in the BLUE CORNER: hailing from the University of Alabama, standing 6-1, and weighing in at 232-pounds: “THE RYDEOUT” NAJEE HARRIS.

This heavyweight bout features the two most elite running back prospects in the 2021 class. Both Najee Harris and Travis Etienne have prolific college profiles. However, there can only be one true RB1 and 1.01 in 1QB leagues.

Etienne vs Harris is a hot debate in the fantasy community right now, especially with rookie drafts taking place, and has been a featured topic on many RotoUnderworld Radio program episodes. Following the information gained from Etienne’s pro day, there appears to be a commonality between those who prefer either back.

Many film-grinders support Harris, while the analytics junkies tend to prefer Etienne.

The drafting of one’s first player in a rookie draft, especially if it’s the first pick, is a decision that cannot be misguided. It can be the birth of a rising contender, or it can cripple a squad for years to come. Using the advanced stats and metrics of these prospects, I’ll help guide you to the proverbial promised land. I will hold up the true RB1 “Simba” for the entire fantasy kingdom to see. As a bonus, we’ll dive into how some of our esteemed judges view this debate (hint: one of them has a history of getting a little…angry).

This fight will go the distance and the judges’ scorecards will be close, but in the end we will find out who is the ultimate black-box prospect.

“If you were to make a PPR monster in a lab, it’s probably gonna look a lot like Travis Etienne. How is Etienne not the best PPR fantasy prospect at running back since Saquon Barkley?” – Josh “Angry Larky” Larky, Mind of Mansion Podcast

Travis Etienne is a home-run hitter with breakaway speed and explosiveness. Proof of this lies in his 4.50 (78th-percentile among qualified running backs) 40-yard Dash, 104.9 (80th-percentile) Speed Score, and 121.0 (64th-percentile) Burst Score. While most expected him to run a slightly faster 40-time, the speed he showcased at 215-pounds cemented him in the “all-purpose back” category as a prospect. Size matters, and if Etienne can play at or near 215-pounds, the wheels are all the way up for the ACC’s all-time rushing leader.

Age-adjusted production also matters, and Etienne has been the man since he was 19 years old. His production profile is nothing short of prolific. He followed his impressive freshman breakout season with two straight years of at least 1,600 rushing yards and 20 total touchdowns.

This is a feat that, according to PlayerProfiler data, only Dalvin Cook, Chase Edmonds, Donnell Pumphrey, and Ray Rice have accomplished.

Playing with Trevor Lawrence capped Etienne’s DCollege Dominator Rating at 25.7-percent (54th-percentile), but he was efficient with his lighter workload. He posted a 6.6 (87th-percentile) College YPC average, with a 7.95 YPC average during his two 1,600 yard seasons.

Travis Etienne is the Best RB in the 2021 Draft ⚡ pic.twitter.com/RSSs3XZPYU

To further round-out his prospect profile, Etienne capped his college career with a 60-target, 48-reception senior season, earning a 12.2-percent (87th-percentile) College Target Share. This has a drastic impact on his fantasy outlook. Thanks to Josh Larky, we know that the average running back reception yields more fantasy points than the average running back carry. Using historical trends, Josh was able to project 79 and 64 receptions in Etienne’s best and second-best NFL seasons, respectively.

“If Etienne can have an NFL season with 79 catches, and another season with 64 catches, I’m probably running Travis Etienne 1.01 victory laps at the Olympic Trials.” – Josh “Angry Larky” Larky, Codebreaker Podcast

For some, this level of profile is more than enough for one to be ingrained as a class’s top prospect, but many in the film-grinder community, including Ray Garvin, aren’t so easily convinced.

“I cannot sit back and just look at the numbers and say ‘This is one of the best running back prospects we’ve seen.’ He’s not! He’s not! He. Is. Not.” – Ray Garvin, Breakout Finder Podcast

When players test at the Combine and/or at their Pro Day, it allows for more accurate player comparisons and expected range of outcomes to better predict a prospect’s success. With talks of Najee Harris going in the NFL Draft’s first round beginning early, he decided to opt out of testing. Declining to test doesn’t mean Harris isn’t a great running back, but it makes it harder to prop him up over a guy like Travis Etienne who has proven size-adjusted speed and explosiveness. Another fellow judge in this contest, Matthew Freedman, weighed in on Harris’s athleticism on the Mind of Mansion podcast.

“We know that he’s not really all that athletic. He’s got agility, but he doesn’t have the long speed to break long runs.” – Matthew Freedman

Luckily for Harris, you don’t need off-the-charts athleticism to be a good running back, especially with his 6-1, 232-pound frame. While he didn’t break out until his junior season, Harris produced when called upon in a loaded Alabama backfield. Playing behind Damien Harris, Bo Scarbrough, and Josh Jacobs resulted in an 89.8 Teammate Score, by far the highest in the 2021 running back class. Harris was dominant when given the lead role, posting 1,200 and 1,400 rushing yards along with 20 and 30 total touchdowns in his final two seasons, respectively.

Najee Harris had 50+ rushing yards in 35 of 51 games at Alabama ⚡ pic.twitter.com/SP7kr6zzJq

This debate matters much more than most will realize. This is not just a battle of two prospects, it’s a battle of process. Film grinders vs analytics junkies. Travis Etienne has the edge in the majority of factors that matter. He has efficiency, an early Breakout Age, two straight years with monster production, has proven to be a solid receiver, and displayed impressive size-adjusted speed at his Pro Day. The combination of Etienne’s athletic profile and age-adjusted dominance is beyond rare for the position.

Najee Harris doesn’t check all of the analytical boxes that Eitienne does, but he can flat out ball. 2,700 rushing yards and 50 total touchdowns in two years is no small feat. Harris moves well for his size, and will assuredly be a valuable all-purpose back for years to come.

Both of these running backs are incredible prospects, but we can only choose one. Etienne possesses the more secure range of outcomes because of the boxes he checks. The first round of rookie drafts is all about minimizing risk. That’s why you go with the better overall prospect with the more secure long term outlook and draft Etienne.

Whichever of these backs you choose, Ray Garvin offers one last piece of assurance to anyone who listens to the RotoUnderworld Radio programs: