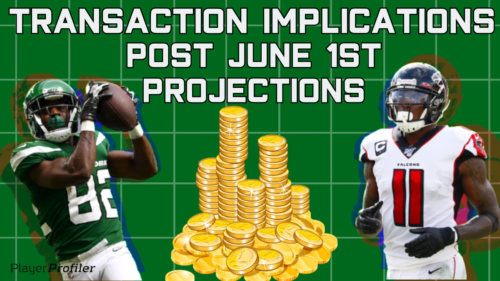 I was perusing over a copy of a newspaper at the Fantasy Mansion when I was shocked to discover the date of the newspaper. June 2nd, 2021. How did I stumble upon this newspaper from the future? The answer is I listened to the latest Mind of Mansion podcast with ASSshampoo and got the address for the Mansion. It was at the Mansion where I discovered a fabled copy of tomorrow’s newspaper.

The Podfather has given me his blessing to share what I discovered. Three veteran players will be on the move soon as part of the aftereffects of the 2021 NFL Draft and a salary cap concept known as Post-June 1st Cuts and Trades. Since I, the Salary Cap-tain of RotoUnderworld, know what will happen, let me explain why it will happen.

Post-June 1st: What Is The Significance?

In the NFL, when a team opts to release a player from his contract or trade him to another team, they take an accelerated hit on their salary cap equal to the remaining guaranteed money on his contract. A player’s signing bonus that is prorated over the course of his contract is the most common example of guaranteed money in their deal.

Let’s use an example to show how a June 1st cut works. Jesse James was released from the Detroit Lions. He was under contract for three more seasons before his release and he had a yearly $1,429,000 signing bonus in each of the three seasons. Releasing him accelerated the hit of his $4,287,000 guaranteed money (his signing bonuses for each of the three seasons) on the team’s 2021 salary cap.

Julio Jones‘ $40.55 million (second-most among wide receivers) dead money made people believe that he would remain in Atlanta this upcoming season despite the overhaul in the front office and the coaching staff. That’s far from a guarantee though.

From an efficiency standpoint, Jones is still productive. His 2.70 (No. 3 among qualified wide receivers) Yards Per Route Run, +23.9 (No. 8) Production Premium, 94.4-percent (No. 7) True Catch Rate, and 0.51 (No. 8) Fantasy Points Per Route Run are examples of his elite level of play. The concern, however, is his declining health. 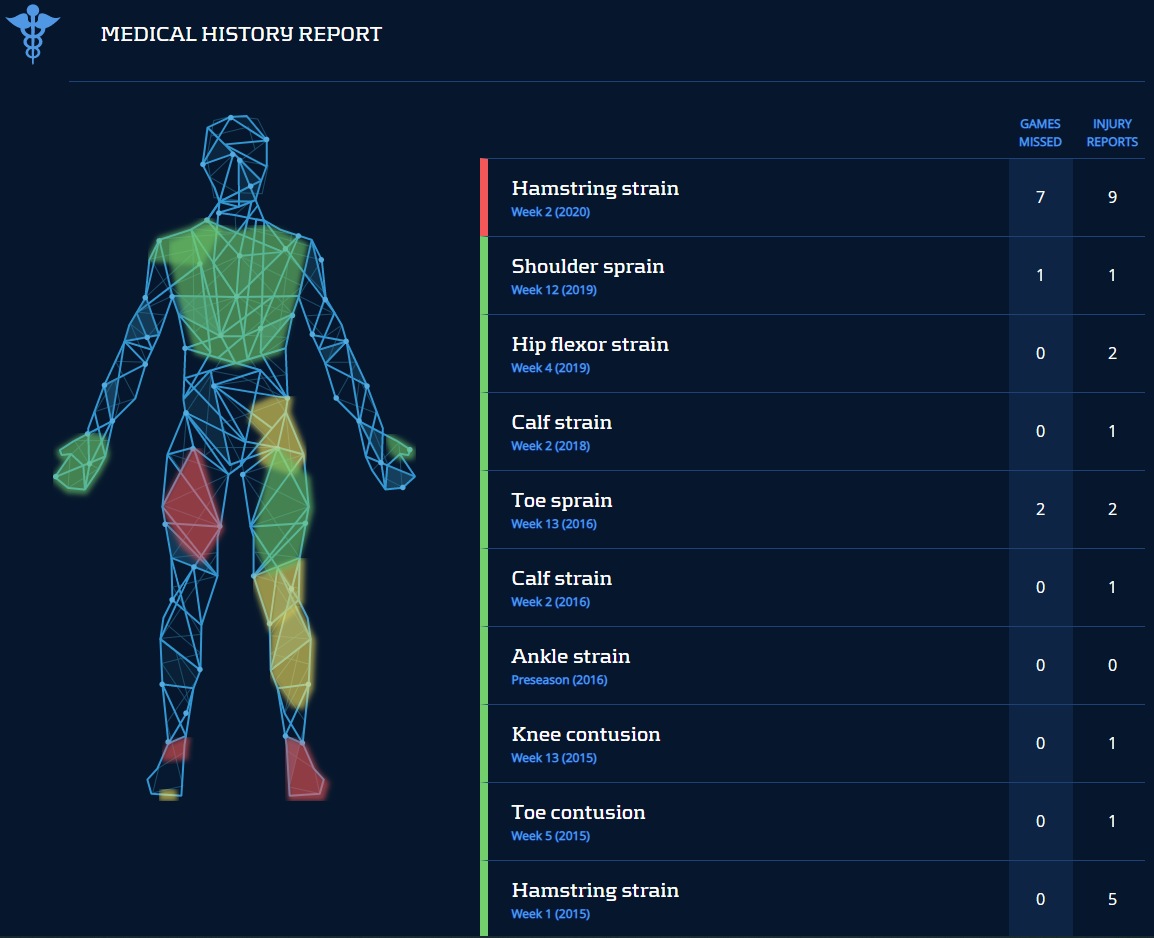 Last season, a hamstring strain limited Jones to nine games. This was his second-fewest games played in a season, and one look at his Medical History Report raises alarms. In his career, 2017 was the only season where he did not suffer a muscle strain or ligament sprain. Now 32 years old, he will be more susceptible to strains and sprains as most athletes are as they get older.

On top of the piling injuries in his career, the Falcons have to prepare to extend Calvin Ridley (2023 FA). With a predicted less than $2 million in cap space for their top-51 players in 2021 and currently projected to be over the 2022 salary cap, the team is in dire need of cap space. Ridley’s Calculated Market Value is estimated at $18.8 million AAV. This is where a post-June 1st trade enters the picture.

A post-June 1st trade would save the Falcons $15.3 million in cap savings for 2021. With a base salary of $11.51 million in both 2022 and 2023, that’s a reasonable salary for contending teams to offer up draft capital to acquire Jones for a Super Bowl push. With holes up and down the roster, a rebuilding Falcons team needs to acquire any draft assets they can from players on the roster. Why didn’t they trade Jones before the 2021 draft if they are embracing a rebuild? A post-June 1st trade disqualifies a team from acquiring draft picks used in April’s draft. Unless the Falcons wanted to eat over $40 million in dead cap on their 2021 salary cap (spoiler: they weren’t), then 2021 NFL Draft picks could not be acquired in as part of a Jones trade.

New Falcons general manager Terry Fontenot and the new front office have left the possibility of a Jones departure with one small, unnoticed decision. Despite their financial difficulties, the Falcons did not restructure Jones’ contract. Restructuring a player’s contract creates short-term cap space, but it’s also a commitment a team makes to a player by converting unguaranteed money (base salary) into guaranteed money (prorated signing bonus). More guaranteed money means more dead cap on a player’s contract, making it harder to financially move on from them. The Falcons did not make that commitment to Jones. 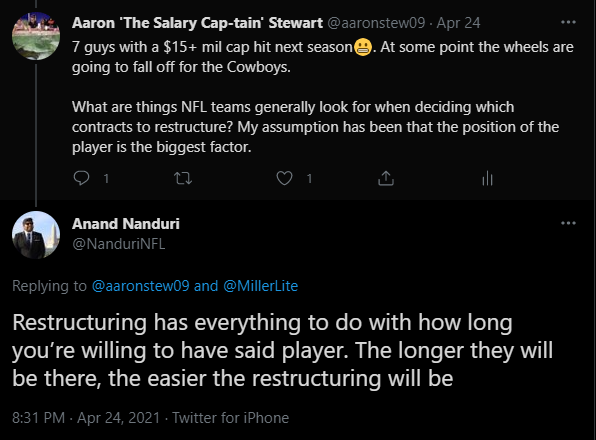 Contract Restructure Explained By Friend of the Rotounderworld, Anand Nanduri

The Eagles moving on from Zach Ertz was a foregone decision. The team has failed to shield their intentions to trade the longtime tight end. Coming off of a poor season that saw him finish with a -6.3 (No. 126) EPA with an NFL-leading 2021 tight end cap hit of $12.72 million, three options were on the table for the Eagles and Ertz. 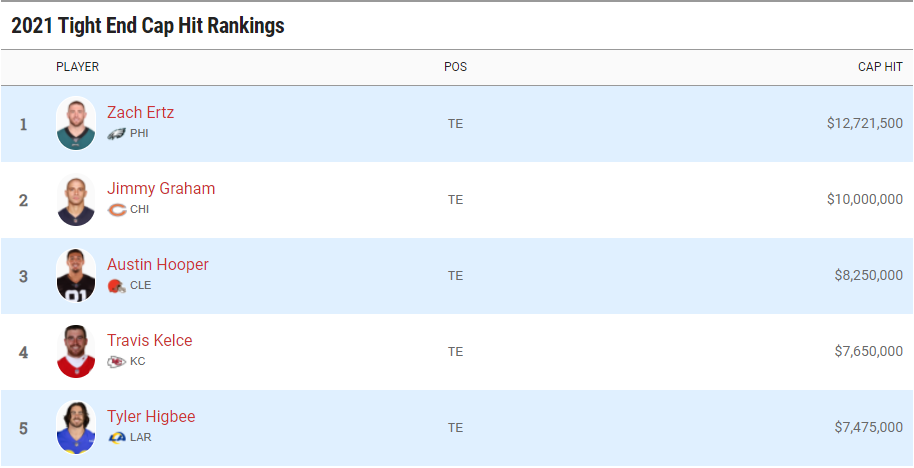 One, he would be asked to take a pay cut to remain with the team. This was unlikely to happen because of his veteran status and NFL interest around the league if he entered free agency. Two, he would be extended and had his base salary converted to a bonus prorated across the length of the extension. The Eagles have deferred paying the toll of the salary cap for many seasons while attempting to return to their 2018 Super Bowl glory. Because of this, the roster imploded as the core exited their collective primes contributing to their lack of top talent.

The final and likely option is that the Eagles moved on from Ertz with Dallas Goedert entering his prime and set to enter free agency in 2022. The Eagles moving on from Ertz was the worst-kept secret around the NFL. Hence the reason no team has stepped up to trade for him. Why trade for a player that will be released? The divorce between Ertz and the Eagles has already started and he is holding out of camp. Designating him as a post-June 1st cut would save $8.5 million (his 2021 base salary) for the Eagles in 2021. But there’s a catch.

Zach Ertz Wonders What The Catch Is

Teams are allowed to designate up to two players as a post-June 1st cut, and they’ve already designated Alshon Jeffery and Malik Jackson. The Eagles are projected to have $4.9 mil in cap space locked up on their top-51 players, eighth-lowest in the NFL. With a lack of cap space and a purge of aging, declining veterans already starting, the team will proceed with cutting Ertz and saving almost $5 million in cap space. 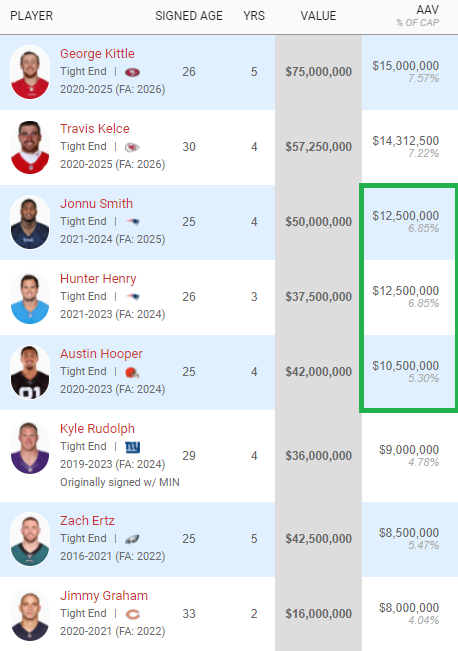 Jonnu Smith and Hunter Henry secured $12.5 million AAV contracts as 25 and 26 years old free agent tight ends in a year where the salary cap dropped. The year before, a 25-year old Austin Hooper signed a contract worth $10.5 million AAV in free agency. This should be the range that the Eagles and Goedert look to receive in his next contract. The cap savings from Ertz’s release will go directly to Goedert’s impending extension.

The writing is on the wall for Jamison Crowder. Releasing him is an easy decision for three separate reasons. The first is pecuniary. He has a cap hit of $11.35 million on the Jets’ 2021 salary cap. That is the second-highest cap hit on the Jets’ entire roster this season. With only a $1 million dead cap hit on the 2021 salary cap, the team can save over $10 million by releasing the slot receiver. Denzel Mims had a Snap Share of 90.0-percent or higher in seven of his nine games played after coming back from an early-season hamstring strain. With Mims and the signing of Corey Davis, Crowder and his 67.8-percent (No. 15) Slot Rate would be the third WR option on the 2021 Jets.

The second reason is the front office. At PlayerProfiler, we don’t blame or applaud coaches (Shan-a-han, Shan-a-han, Shan-a-han), but we DO care about general managers. GMs identify areas of the team to improve and add talent to the NFL teams. When GMs make transactions, fantasy football analysts pay attention. GM’s actions speak louder than the coach’s words. Enter Joe Douglas, who joined the Jets in May of 2019, less than a month after that year’s draft and a couple of months after free agency kicked off. Why is this important? He didn’t sign Crowder; his predecessor, Mike Maccagnan, did.

Douglas inherited Crowder and his $16 million guaranteed for the first two years of his contract; Crowder wasn’t his guy. For the first time in his position, Douglas can move on from him as he did last season with Le’Veon Bell, another addition from the previous regime.

This leads to the third and most important reason that Crowder will be released. Douglas got his guy last month in with the No. 34 overall pick of the 2021 NFL Draft in Elijah Moore. Crowder has been a serviceable option in the slot; in fact, he finished with 8.83 (No. 6) Slot Fantasy Points Per Target.