In the Red Corner: Jaylen Waddle, In the Blue Corner: DeVonta Smith 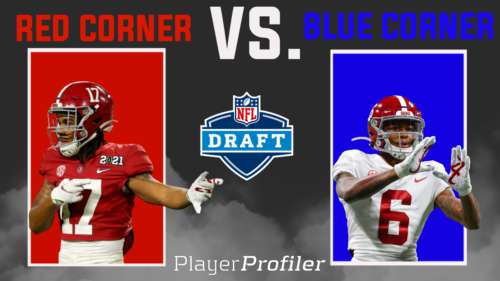 Introducing first, in the RED CORNER: hailing from the University of Alabama, standing 5-9, and weighing in at 180-pounds: JAYLEN “MAGIC” WADDLE.

His opponent, in the BLUE CORNER: also hailing from the University of Alabama, standing 6-0, and weighing in at 170-pounds: “THE SLIM REAPER” DEVONTA SMITH.

The matchup you didn’t know you needed, the Alabama boys pitted against each other. The Senior versus The Junior, The Slim Reaper versus Magic, The Eagle versus The Dolphin.

Yes, both of these players are amazing talents, but who will be victorious? Waddle and Smith have been playing alongside each other for three years now, destroying college defenses left and right with no remorse. They played in the shadows of Calvin Ridley, Jerry Jeudy, Cam Sims, and Henry Ruggs throughout their collegiate careers, and 2020 was the year for them to ball out. However, one won the Heisman and the other suffered an ankle injury, halting his electric start to the season.

There is no easy way out of this. Sides have to be picked. Let’s get into it.

Jaylen Waddle’s game-breaking speed was part of the reason he was drafted No. 6 overall by the Dolphins, but what were the other reasons that they picked him so early? His ability to get DBs off balance and create separation was a major factor because it helps out his old Alabama quarterback, Tua Tagovailoa. His 20.0 (93rd-percentile among qualified wide receivers) College YPR average pairs well with his speed. Although he didn’t produce well in college, he had an impressive freshman season in 2018 behind Jerry Jeudy, Henry Ruggs, and DeVonta Smith. 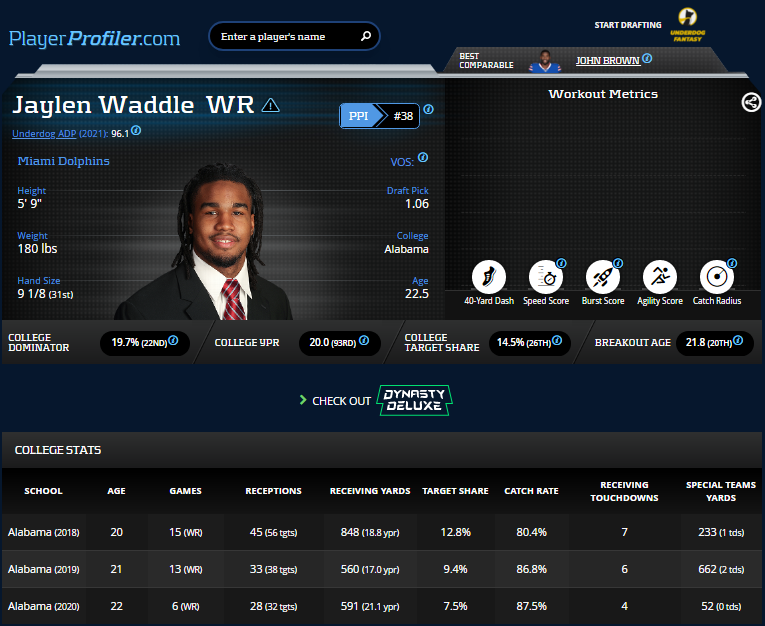 After failing to improve upon his production as a sophomore, 2020 looked to be his bounceback year. He was averaging 139.2 yards per game over his first four, outproducing Smith. Then he went down with an ankle injury and Smith went on to win the Heisman. Aside from the low production, Waddle has more negatives in general, including a 21.8 (20th-percentile) Breakout Age and a 19.7-percent (22nd-percentile) College Dominator Rating. He doesn’t have an alpha profile, and his Best Comparable Players aren’t exciting either, with John Brown being his most favorable.

Waddle to the Dolphins is an interesting landing spot. He’ll be competing with Will Fuller, DeVante Parker, Preston Williams, and Mike Gesicki for targets. No doubt a crowded offense for him to break out in, but he does have a connection with Tagovailoa. Miami ranked No. 20 in plays per game and No. 18 in passing plays per game in 2020. Not favorable for Waddle.

When you think of a player both film grinders and analytics gurus can enjoy, DeVonta Smith definitely doesn’t come to mind. Yes, Smith was a great college player, but his weight is the big issue. A listed weight of 170-pounds certainly warrants skepticism. Only a couple players come to mind when you think of successful lightweight receivers: Marvin Harrison and Chad Johnson. Even then, they were both heavier coming out of college, but they didn’t produce at Smith’s level. When it comes to weight, he is undoubtedly an outlier. 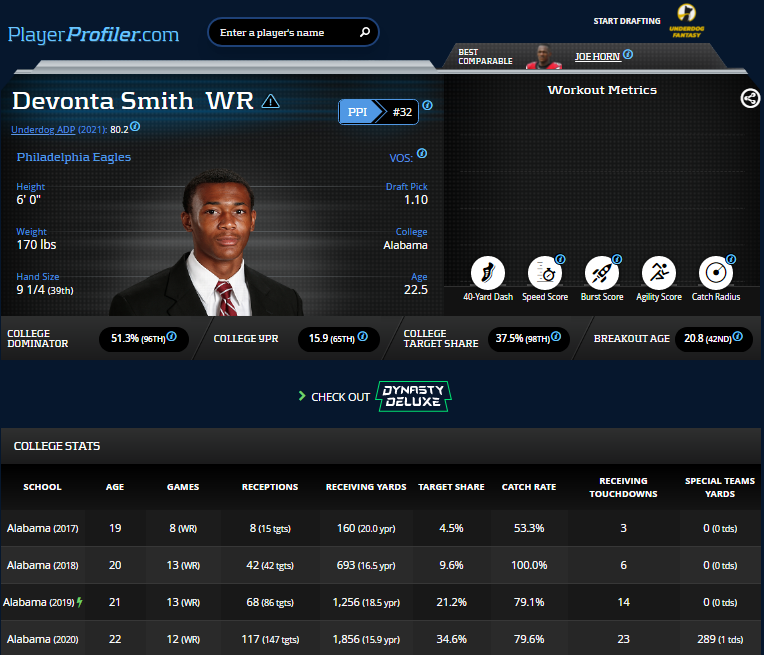 Although Smith didn’t have early production, which attributes to his 42nd-percentile Breakout Age, he had insane target competition, evidenced by having the Breakout Finder app’s highest all-time Teammate Score. In 2018, Smith’s sophomore year, he put up 693 yards, 10 TDs, and caught all 42 of his targets while playing with Henry Ruggs, Jaylen Waddle, and Jerry Jeudy. The next year, he put up 1,256 and 14 TDs while playing with the same trio. With Ruggs and Jeudy in the NFL and Waddle going down, Smith ran away with the Heisman trophy, logging a 34.6-percent Target Share and a 51.3-percent (96th percentile) College Dominator Rating. When he finally got the spotlight, he balled out.

Smith going to the Eagles is great for him. He gets to be the undisputed WR1 and reunites with his former college quarterback, Jalen Hurts. With the potential for lots of negative Game Script, and the NFC East bolstering their offenses, expect a lot of come from behind scenarios where he will be fed targets.

At the end of the day, this is a comparison of outliers. One is underweight and the other didn’t produce in college. Both of these guys received first-round draft capital, and their franchises are invested in them for the long-term.

Yes, Jaylen Waddle is faster and more athletic, but I’m raising DeVonta Smith’s arm on this one and awarding him the win by T.K.O.

Waddle’s lack of production in college is a bigger issue than Smith’s weight. Smith was able to out-produce Henry Ruggs and Jerry Jeudy in 2019, but Waddle wasn’t even close. On top of that, Smith’s landing spot is more favorable in terms of Target Share and Game Script. He’s the outlier to bet on.