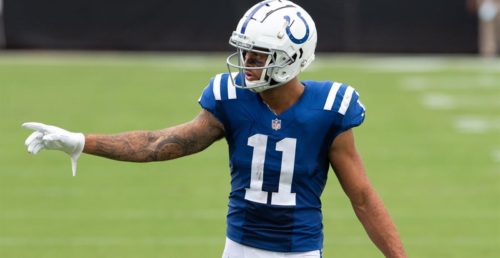 It’s time to identify wide receiver-cornerback matchups to target in fantasy football for Week 11. The Week 9 article identified Will Fuller and he finished as WR14 for the week. His 21.0 fantasy points were his third-most recorded in a game this season. The article also identified Marvin Jones and he finished as a respectable Flex play in 12-team leagues with 13.3 (No. 35) fantasy points. Implied Vegas points, predicted game outcome, weather, and projected primary coverage will determine three wide receivers to start in fantasy. One challenge this week is that this article will avoid no-brainer starts such as Julio Jones vs. the Saints.

Is it cheating to go back to the well with Will Fuller again? He finished outside the top-36 WRs in two of his last three performances. In those games, his primary coverage was Jaire Alexander (PlayerProfiler’s No. 5-ranked cornerback) and Denzel Ward (No. 2). When he matched up with top cornerbacks in the league, his teammate Brandin Cooks outscored him in fantasy points. This week, Cooks is the Texans receiver with the tough cornerback matchup. J.C. Jackson (No. 13) has five straight games with an interception. His +48.6 (No. 9 among qualified cornerbacks) Coverage Rating, 57.4-percent (No. 15) Catch Rate Allowed, and 61.7 (No. 6) Passer Rating Allowed are among the best at the position. Meanwhile, Fuller’s primary coverage is Stephon Gilmore (if healthy) or his backup Jason McCourty. 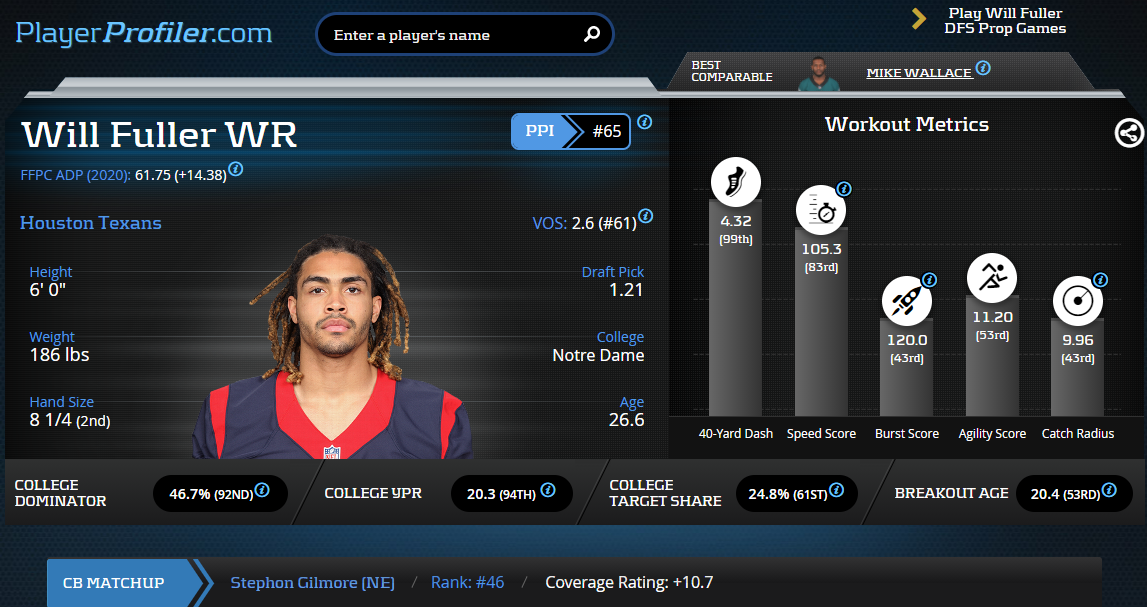 Gilmore, the reigning DPOY, has struggled this season before his Week 7 knee injury. In 2019, he led cornerbacks with a +65.6 Coverage Rating and a 44.6-percent Catch Rate Allowed. This year’s +10.7 (No. 43) Coverage Rating and 66.7-percent (No. 51) Catch Rate Allowed represent a significant dropoff in production. Gilmore’s 0.75 (No. 3) Target Separation mark and 0.0-percent (No. 1) Burn Rate displays his ability to stick to his coverage assignment. However, his 1.90 (No. 57) Fantasy Points Allowed Per Target is near the bottom among qualified cornerbacks. McCourty’s stats are worse than Gilmore’s, but his 156 Routes Defended are not enough for him to qualify. His 147.0 Passer Rating Allowed is nearly perfect. Fuller’s 122.1 (No. 14) QB Rating When Targeted means that McCourty is a weak link on the Patriots defense for Deshaun Watson to target.

The Patriots-Texans game has an O/U set at 49 points, and only three games on the slate have a higher projected total. On top of that, the Texans are a Vegas underdog playing at home in a dome. While Cooks has out-targeted Fuller in each of the last three games, it doesn’t matter. Fuller’s 2.33 (No. 11) Fantasy Points Per Target trumps Cooks’ 1.70 (No. 70) mark. He makes his targets count, evidenced by his +29.9 (No. 6) Production Premium compared to Cooks’ -2.2 (No. 53) mark. Expected to play from behind in a dome against weaker primary coverage means that Fuller is a wide receiver to start in a high-scoring game.

Matt Kelley told Patrons to stash Michael Pittman in redraft leagues back in Week 8. Pittman flashed potential in a tough Week 9 matchup against Baltimore. His four receptions for 56 yards did not stand out, but his 37 Routes Run and 108 Air Yards revealed that a breakout performance was on the horizon. Ray Marzarella told PlayerProfiler readers to pick him up before Week 10. Then Pittman put together a 7-101-0 stat line with a 21-yard carry for a total of 19.2 (No. 16) fantasy points in Week 10. The momentum continues this week as the Colts host the Packers in their home dome. The 51-point O/U for the game is the second-highest total on the slate, and Pittman is the No. 1 wide receiver for the Colts in the game.

At 6-4, 223-pounds, Pittman has the prototypical size that the Indianapolis Colts lack in their receiver core. Combined with his 111.2 (93rd-percentile) Speed Score and 10.24 (89th-percentile) Catch Radius, he is a red zone threat for Philip Rivers to target. Per PlayerProfiler’s Data Analysis Tool, Pittman has a 17.2-percent (No. 36) Red Zone Target Share. Only four wide receivers exceed his 80-percent Red Zone Catch Rate on a larger Red Zone Target Share. Unlike other wide receivers with the same physical build, Pittman is a threat after the catch, averaging 4.2 (No. 36) Yards After Catch Per Target. For comparison, Pittman has almost the same YAC (117) as Mike Evans (135) on half of the receptions.

Kevin King is Pittman’s primary coverage this week and he plays his first game since Week 4 due to a quad injury. King struggled before his injury, hence his low spot on the cornerback rankings. His -14.7 (No. 70) Coverage Rating and 73.7-percent (No. 72) Catch Rate Allowed is a disappointing showing in four games. Can King stop Pittman? Pittman’s 75.0-percent (No. 19) Catch Rate is impressive for a rookie; it jumps up to a 95.5-percent (No. 6) True Catch Rate when factoring out uncatchable targets.

Tyler Boyd’s 11 (No. 6) red zone targets are comparable to fellow slot receivers Adam Thielen and (2019) Cooper Kupp. This allows Boyd to have a WR2 floor each week in PPR leagues as a chain-mover, racking up 60 (No. 7) receptions with touchdown upside. Boyd benefits this season from Joe Burrow upgrading the quarterback position. His 6.1 (No. 34) Target Quality Rating and 7.89 (No. 12) Target Accuracy mark means that Burrow is delivering passes that he can convert. To his credit, his 1.3-percent (No. 86) Drop Rate reciprocates Burrow’s accuracy by not dropping passes thrown to him. 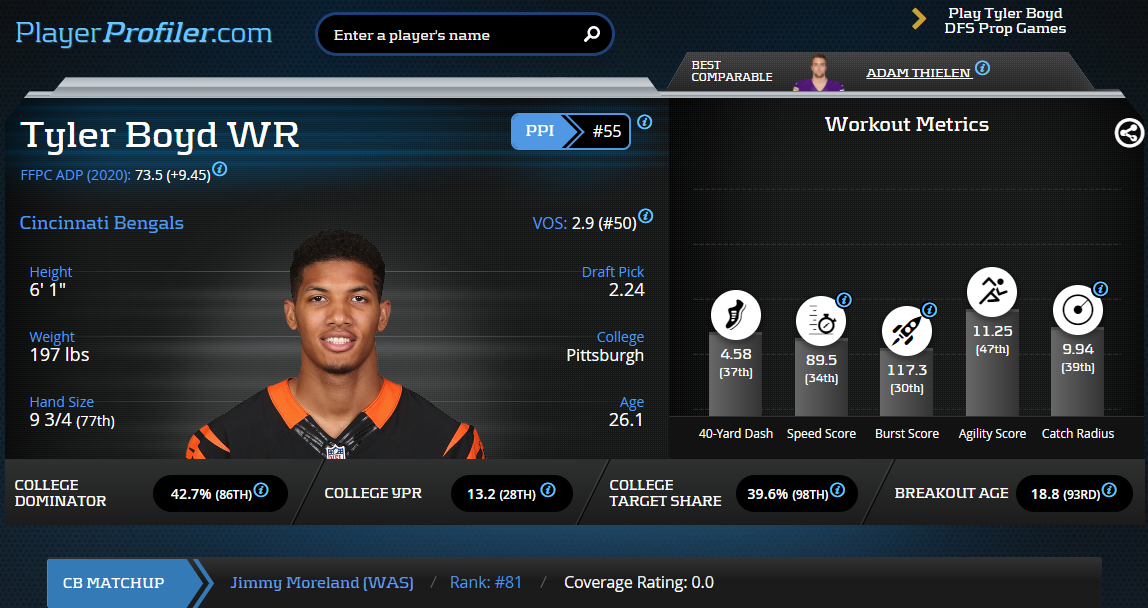 Jimmy Moreland is in for a long day on Sunday. Back in Weeks 1-2, Moreland was targeted 22 total times and gave up 16 catches for 171 yards while primarily covering Greg Ward and a 37-year-old Larry Fitzgerald. His poor performances while filling in for an injured Kendall Fuller early in the season limited his snaps since those games. The Cincinnati Bengals lead the NFL in 11-personnel (3WR) usage, which will force Moreland onto the field more. Moreland allowed a 22.7-percent Target Rate when he played, but his 154 Routes Defended prevent his stats from qualifying. Among qualified cornerbacks, only 13 were targeted more.

The game between the Cincinnati Bengals and Washington Football Team will be played outside with a 0-percent chance of precipitation. With the weather a non-factor in this game and the Bengals playing as a Vegas underdog, expect the league’s No. 2 pass volume team (44.8 Pass Plays Per Game) to sling the ball. Boyd and his 377 (No. 1) Slot Snaps are ready to exploit his inferior opponent.