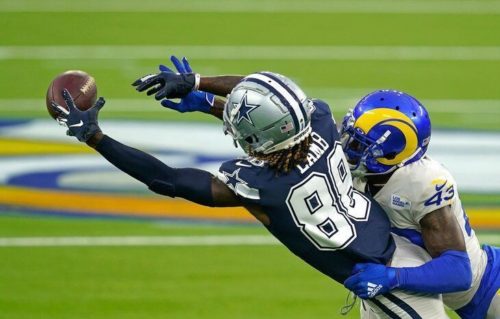 Leverage Lamb Against the Fantasy-Friendly Falcons

With Andy Dalton cleared to play after battling COVID-19, his return boosts the outlook of the Cowboys receivers and the offense as a whole. And Dallas finds itself in the perfect get-right spot against the Minnesota Vikings.

Cowboys-Vikings offers an enticing main slate matchup. Vegas puts the odds in Minnesota’s favor by a touchdown in a game with a projected total of 47.5 points. That brings with it possibility of a Game Script which involves Dallas throwing a ton while playing from behind. In what profiles as a smash spot for Dallas receivers, large-field GPPs gamers should target CeeDee Lamb. Priced in between Amari Cooper ($6,900) and Michael Gallup ($5,400) on DraftKings, Lamb ($5,800) offers leverage at low projected rostership. 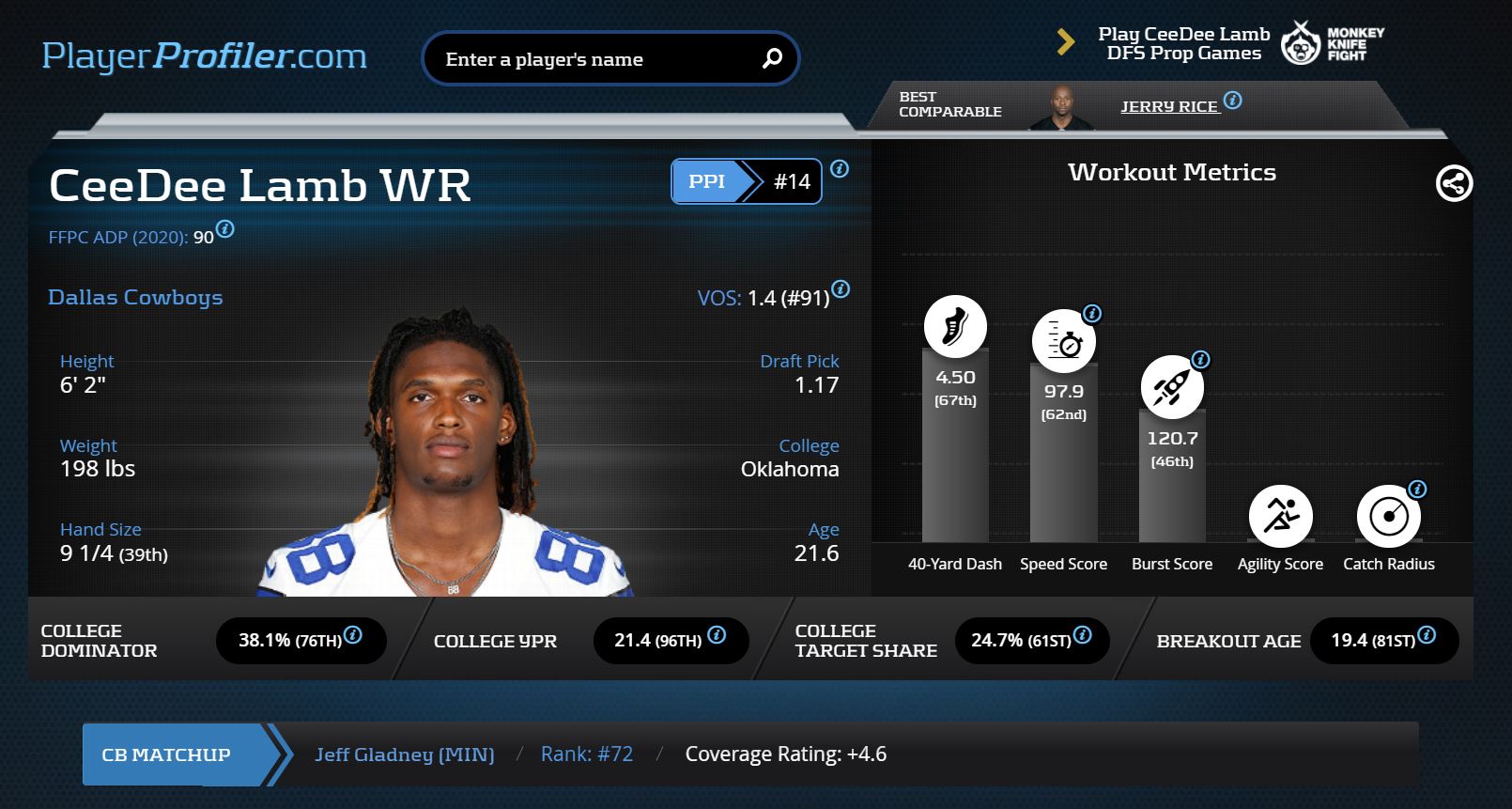 Lamb’s rookie campaign has seen its share of highs and lows, which is reflected in his 7.2 (No. 45 among qualified wide receivers) Weekly Volatility score. In other words, he profiles as a boom-or-bust type of player. He has posted one WR1 and two WR2 finishes this season, eclipsing 25 fantasy points in his most productive game. He has also finished with 11 or fewer fantasy points four times. Despite that – and Dallas’ adversity at QB – the first-rounder from Oklahoma ranks in the top-20 with 44 (No. 15) receptions, 595 (No. 20) receiving yards and 416 (No. 18) Completed Air Yards. He also leads the Cowboys with 13 (No. 19) Deep Targets (13) and three (No. 31) touchdowns. Against the Vikings, he’s primed for a boom week.

The Vikings secondary offers the cure for what ails struggling receivers. Minnesota has yielded 19 receiving touchdowns so far this season and allows +4.09 fantasy points above the mean to opposing receivers, both the sixth-most in the league. Lamb draws a favorable primary matchup against Vikings cornerback Jeff Gladney, whose +4.6 Coverage Rating ranks No. 54 among qualified cornerbacks. Gladney allows 2.00 (No. 61) Fantasy Points Allowed Per Target and has given up as many TDs (three) as he has pass break-ups..

What Chase Claypool has accomplished to date in his rookie campaign makes for an impressive NFL entrance. The second-round pick from Notre Dame has recorded nine (No. 2) touchdowns – seven receiving, two rushing – through his first nine games. He’s proven himself a versatile yet volatile player who carries a low floor but an immense ceiling, topping 40 fantasy points in his Week 5 coming out party.

No stranger to the boom-bust life, Claypool’s 12.3 Weekly Volatility score ranks No. 5 among qualified receivers. Scores over 10 reflect extreme fantasy scoring fluctuation. His volatile nature coupled with the overall talent of the Steelers receiving corps makes pinpointing his blowup weeks tough. However, he’s a threat to take it to the house each time he touches the ball and his heady ceiling can’t be ignored. He’s seen 9, 13 and 10 targets over the past three games, scoring three touchdowns in that time. With Ben Roethlisberger hitting his stride of late, his 128.4 (No. 7) QB Rating when targeting Claypool reinforces their dynamic connection. 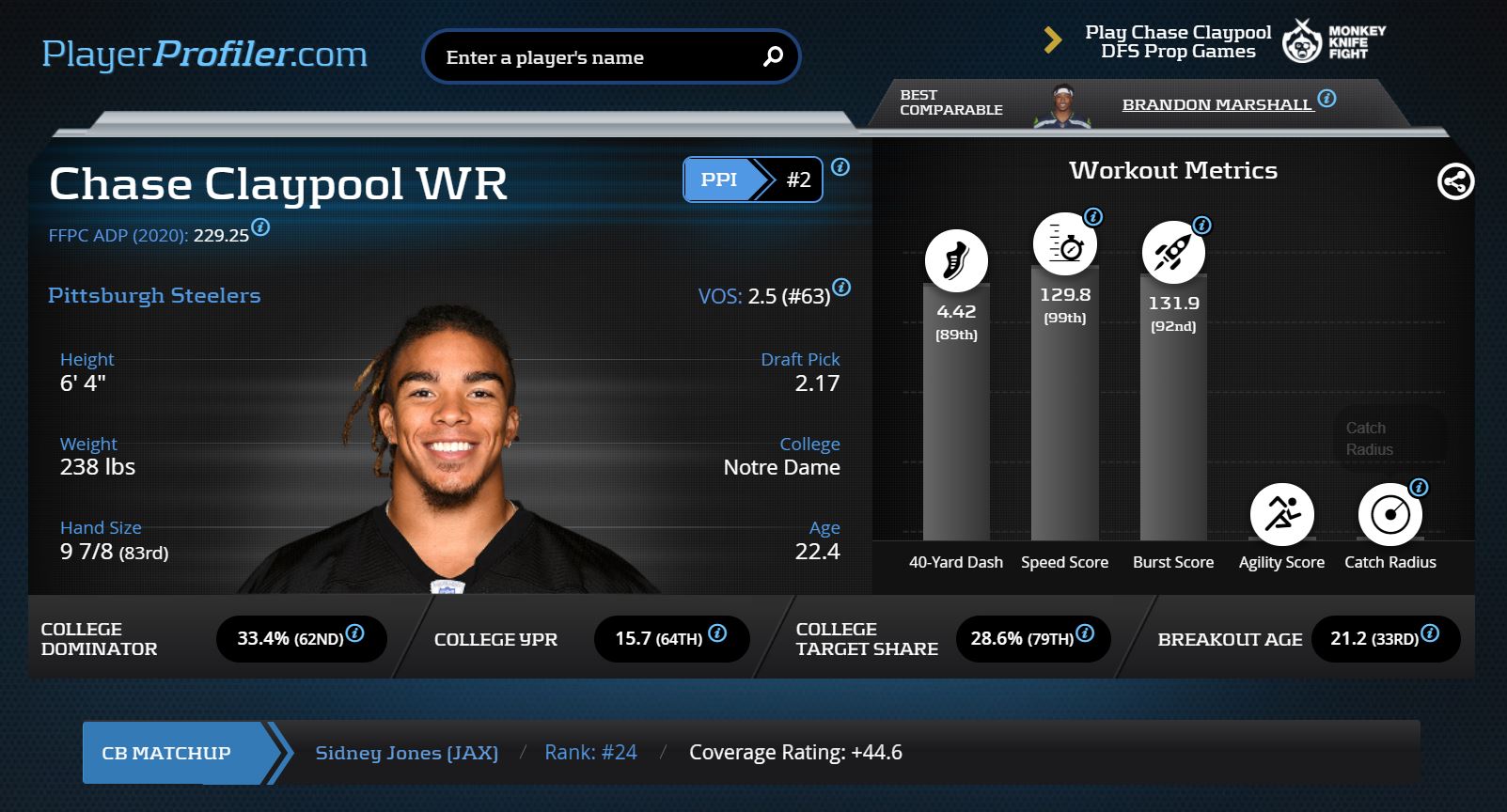 Despite his success, Claypool is an undervalued GPP asset this week with low projected rostership in a matchup against Jacksonville. The Jaguars yield +0.97 (No. 12) fantasy points above the mean to opposing receivers. However, according to Sharp Football Stats, they allow an explosive pass play at a rate of 10-percent, which is tied for the fourth-most in the NFL. They’ve yielded 31 plays of 20-plus yards this season. That sets up Claypool, who has drawn 16 (No. 8) Deep Targets, to drop the hammer. He’ll face a tough test against Sidney Jones, PlayerProfiler’s No. 24-ranked cornerback. But given’s Claypool’s 6-4, 238-pounds frame coupled with his elite athleticism, he figures to get the upper hand.