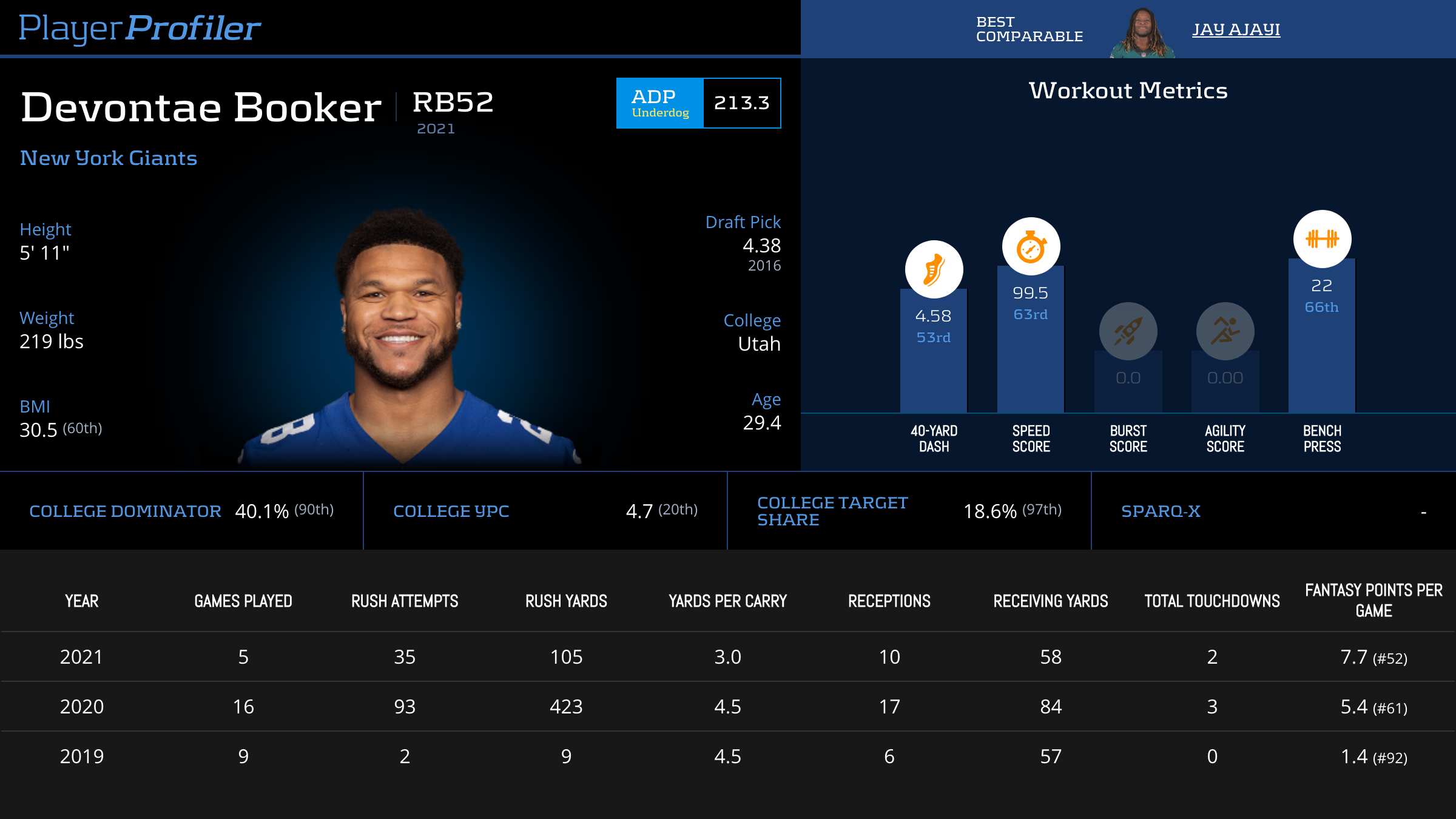 Facing a bad Chiefs defense, Devontae Booker will see the opportunity for a big game. With Saquon Barkley out the last few weeks, Booker has been a nice fill-in, putting up double-digit fantasy points in each of the last three. He is getting over 15 touches per game without Barkley, with solid usage in the passing game too, seeing 11 targets over the last three weeks. The Chiefs have a bad defense all around, allowing over 90 yards rushing in every game but one this season.

They have also allowed at least 4 RB receptions each of the last five weeks. With Booker seeing the bulk of the Giants’ backfield opportunities, he stands to have a great matchup for Week 8. 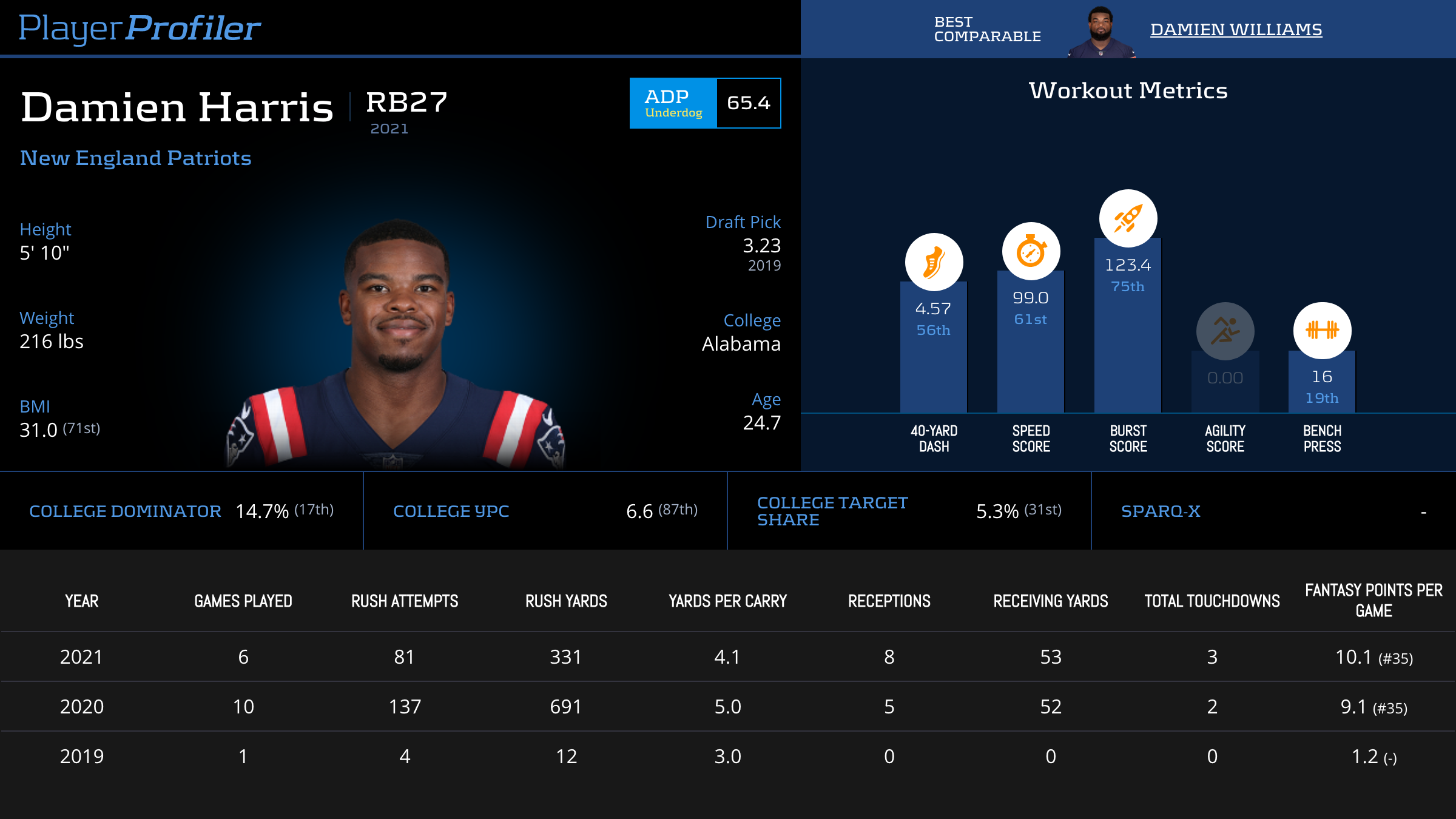 Damien Harris has been an aggressive, excellent runner for the Patriots. He had a 7.4-percent (No. 9 among qualified running backs) Breakaway Run Rate entering Week 7, and ripped off 106 rush yards on 14 carries in Week 7. Meanwhile, the Chargers have allowed over 100 yards rushing to opponents every week except Week 4 this season.

*Damien Harris has entered the chat*

The Charger defense is porous, especially when it comes to the run and teams have taken advantage of that. The Patriots use several different backs, but Harris is the primary downhill runner, seeing at least 14 carries the last three weeks and scoring in all three games. For Week 8, Harris is in an excellent position to produce for fantasy, with the susceptible Chargers defense up on the schedule. 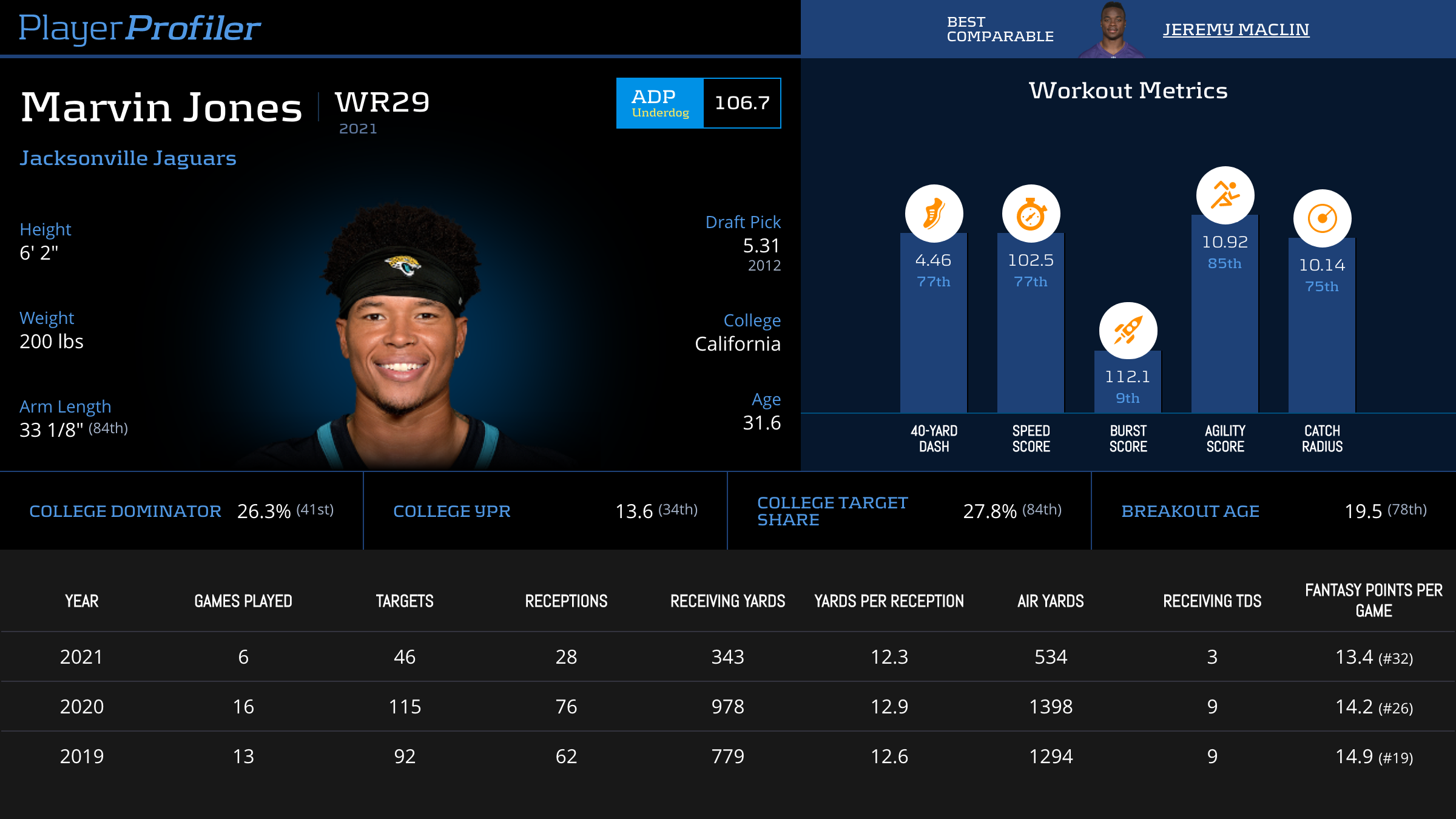 Entering his Week 7 bye, Marvin Jones had 534 Air Yards (No. 16 among WRs entering Week 7) and an 89.9-percent (No. 9 entering Week 7) Snap Share. D.J. Chark‘s injury has led to a little more opportunity for Jones. He has received at least 6 targets in all but one game this season, including 16 combined targets the last two games. The Seahawks defense had a streak of four straight games allowing over 300 passing yards from weeks 2 through 5. Entering Week 7, Seattle corners Sidney Jones and D.J. Reed both ranked outside the top 80 in yards per reception allowed. Jones himself ranked outside the top 130 corners in Passer Rating and Catch Rate Allowed entering Week 7. Marvin is set to put up big fantasy numbers this week. 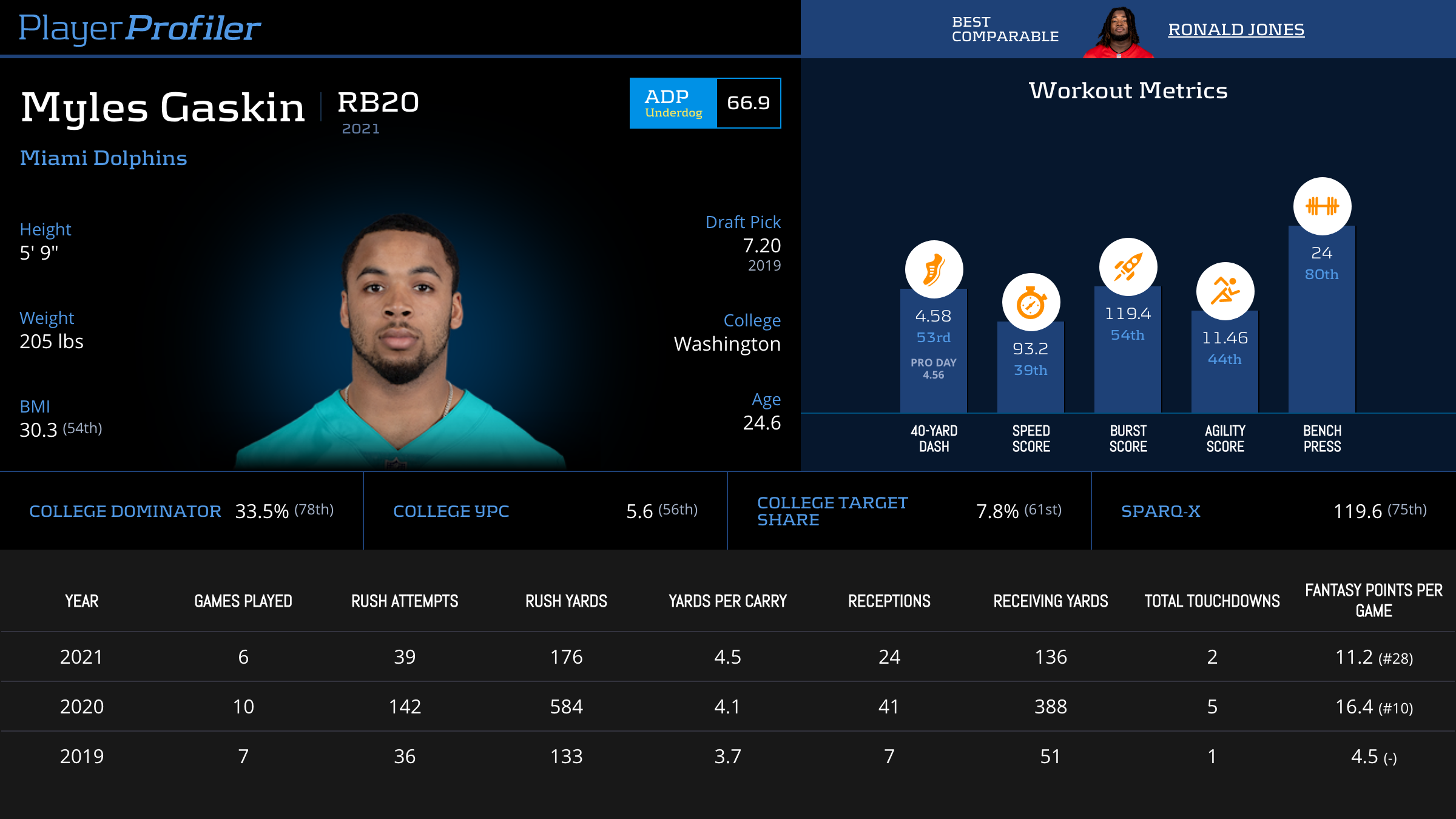 Myles Gaskin‘s fantasy season has been a rollercoaster. He has hit double-digit PPR fantasy performances four times, exceeding 30 fantasy points once. However, he has put up three single-digit duds. Entering Week 7, the Dolphins averaged 19.2 (No. 32) Team Run Plays Per Game, and while Gaskin gets passing game work, it has not been enough to give him consistent performances each week. This week, he faces the Bills, who have a good defense, headlined by Ed Oliver and Tremaine Edmunds in the front seven, among others. When the Bills and Dolphins played earlier in the season, Gaskin only saw 5 carries. He had 4 receptions, but the Dolphins were scoreless in a blowout. Don’t expect the Dolphins to use their run game often this week. Despite Malcolm Brown‘s injury, Gaskin will be a touchdown-dependent fantasy RB this week. 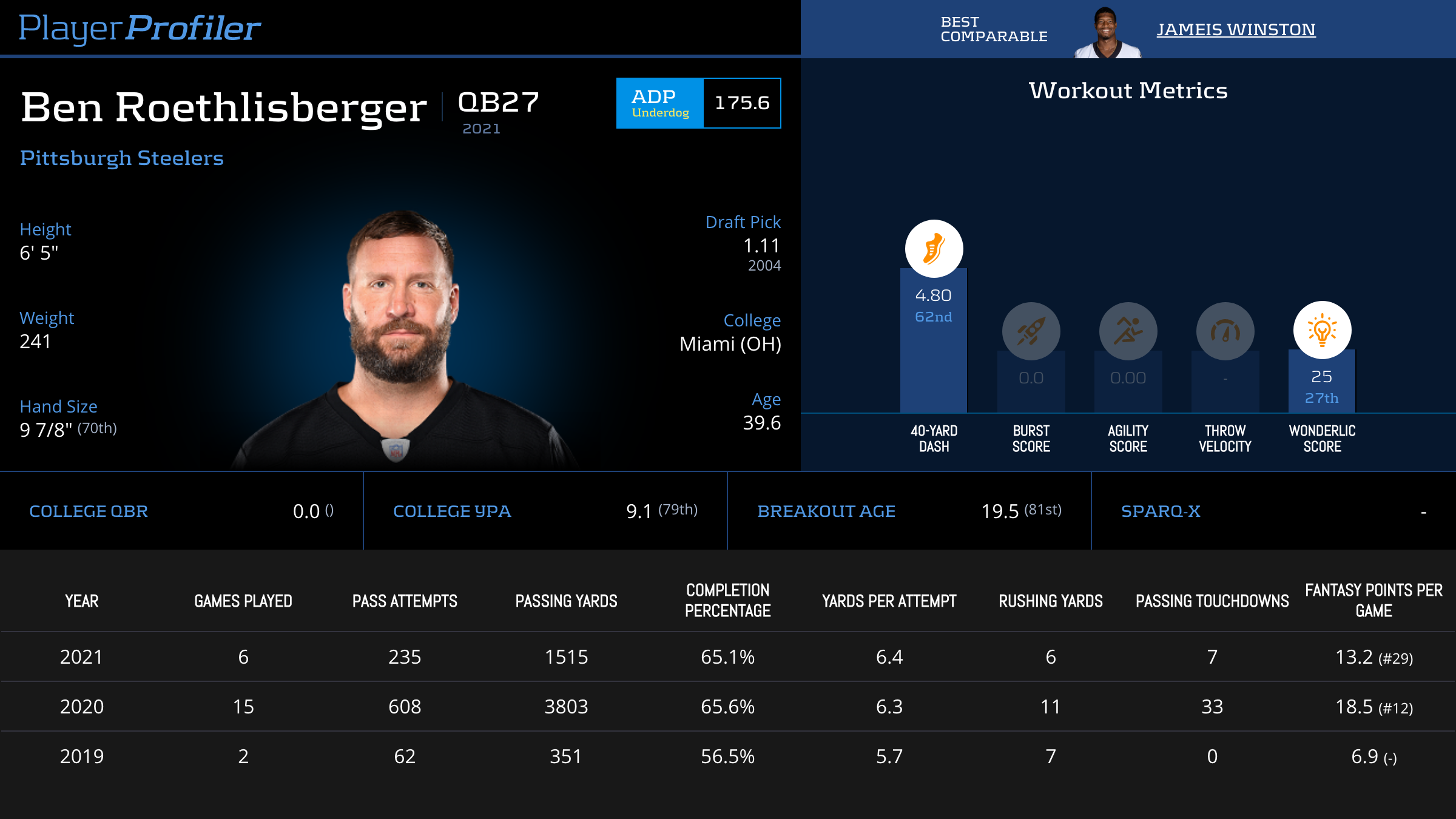 This is not where we want to be. Ben Roethlisberger has been near the very bottom of the list for some time now. https://t.co/LRAj9Nq9IF

The Browns have been trouble for mediocre QBs, allowing less than 230 passing yards a game to QBs not named Kyler Murray, Justin Herbert, and Patrick Mahomes this season. With Roethlisberger’s low yards per attempt, Myles Garrett bearing down on him, and a strong Browns secondary, Big Ben is not a great option this week. 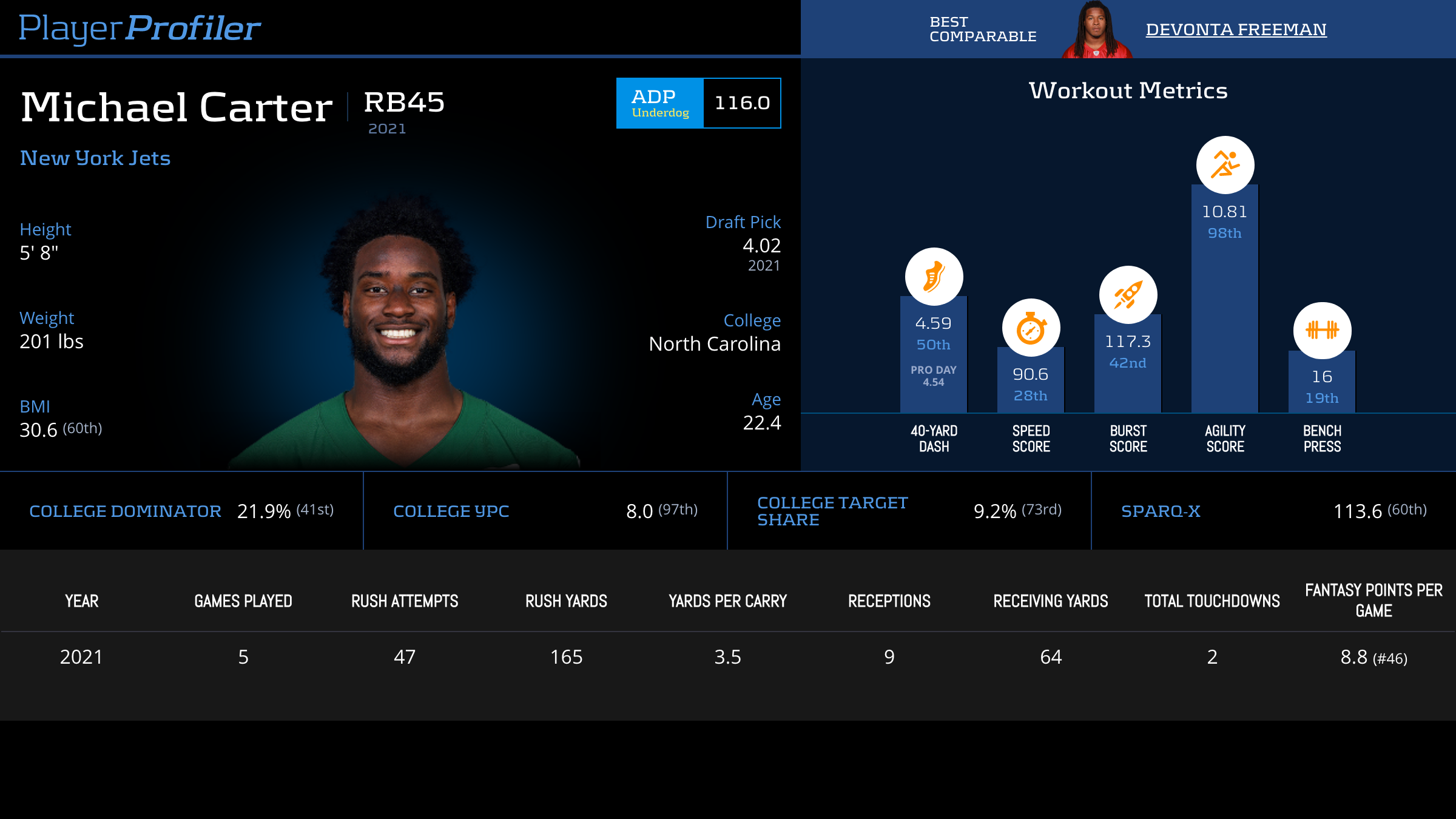 Michael Carter is finally a Flex play for fantasy. He has been the lead back, with Ty Johnson still getting some work for the Jets. However, Carter has yet to see more than 13 carries in a game. In Week 7, with Mike White replacing Zach Wilson, Carter reeled in 8 receptions, a good amount of those in part due to a huge blowout. It was also his first time seeing more than 3 targets.

With White (or Joe Flacco) at QB, an already iffy Jets offense won’t look great. The Bengals have been solid against the run lately, holding Ravens and Lions RBs to under 50 rush yards each of the last two games. While the Jets very well may be playing catch-up this game, allowing Carter to become a receiver, he won’t get the rushing volume, efficiency, or scoring opportunity needed to have a good fantasy game against the Bengals.