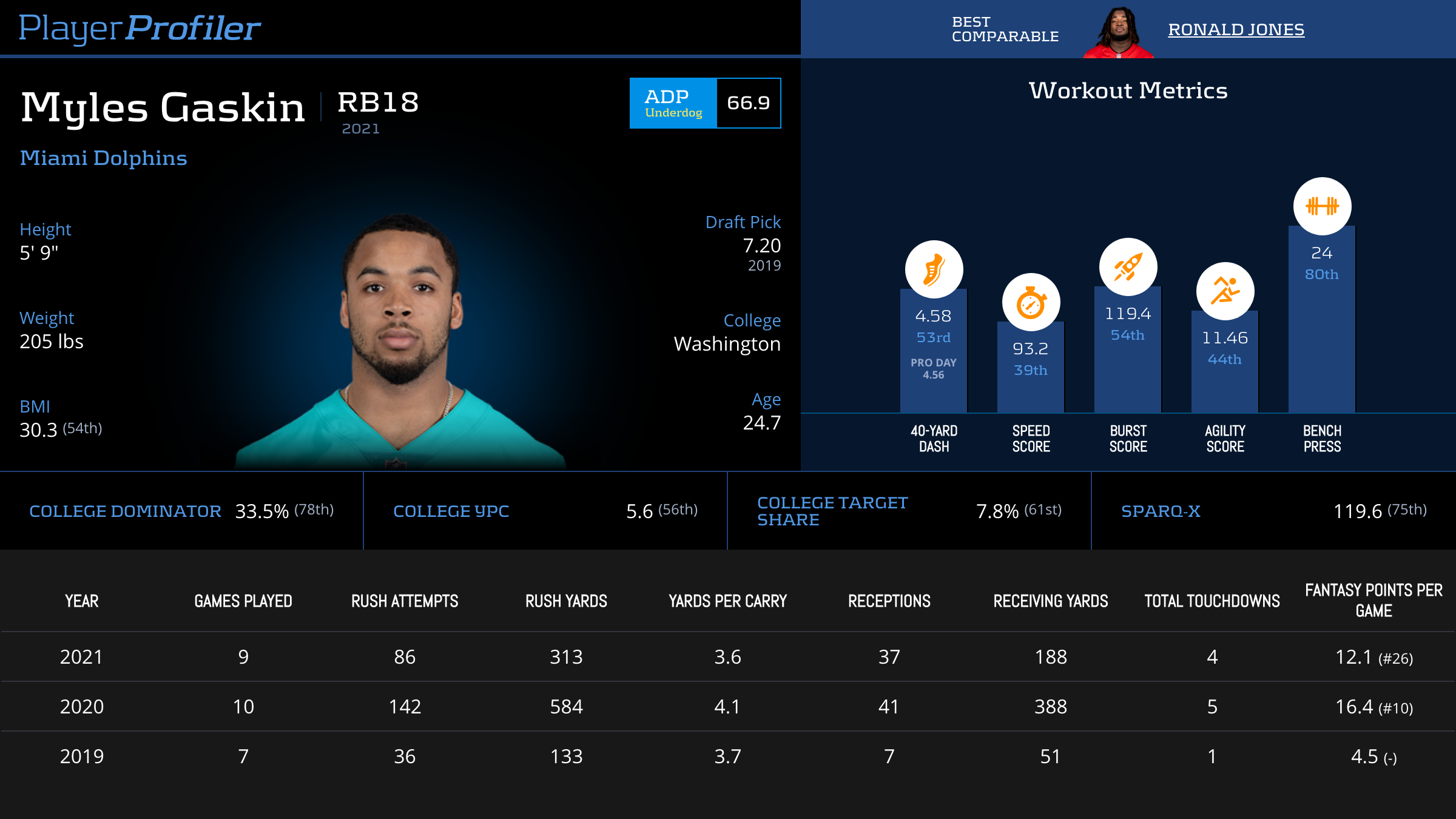 The New York Jets have allowed at least 6 receptions to opposing RBs in five of their last six games, allowing at least 4 receptions to opposing RBs each game this season. The Jets have also allowed at least 3 touchdowns to RBs in three of their last four games. Entering week 10, Myles Gaskin had 46 (No. 3 among qualifying RBs prior to Week 10) targets with 123.8 (No. 9) Weighted Opportunities this season.

Damn man, I really wanna get off the Gaskin train, but he gets to play the Jets this week. Also this is supposed to be his “on” week (half joking but kind of serious). He SHOULD be a decent flex play, but play with caution pic.twitter.com/fLs8dMpi5O

Gaskin has had four straight games with at least 15 touches, including at least 3 receptions in four of his last six games. Facing a New York team that struggles against pass-catching backs, Gaskin is set up nicely to perform better than his usual output. 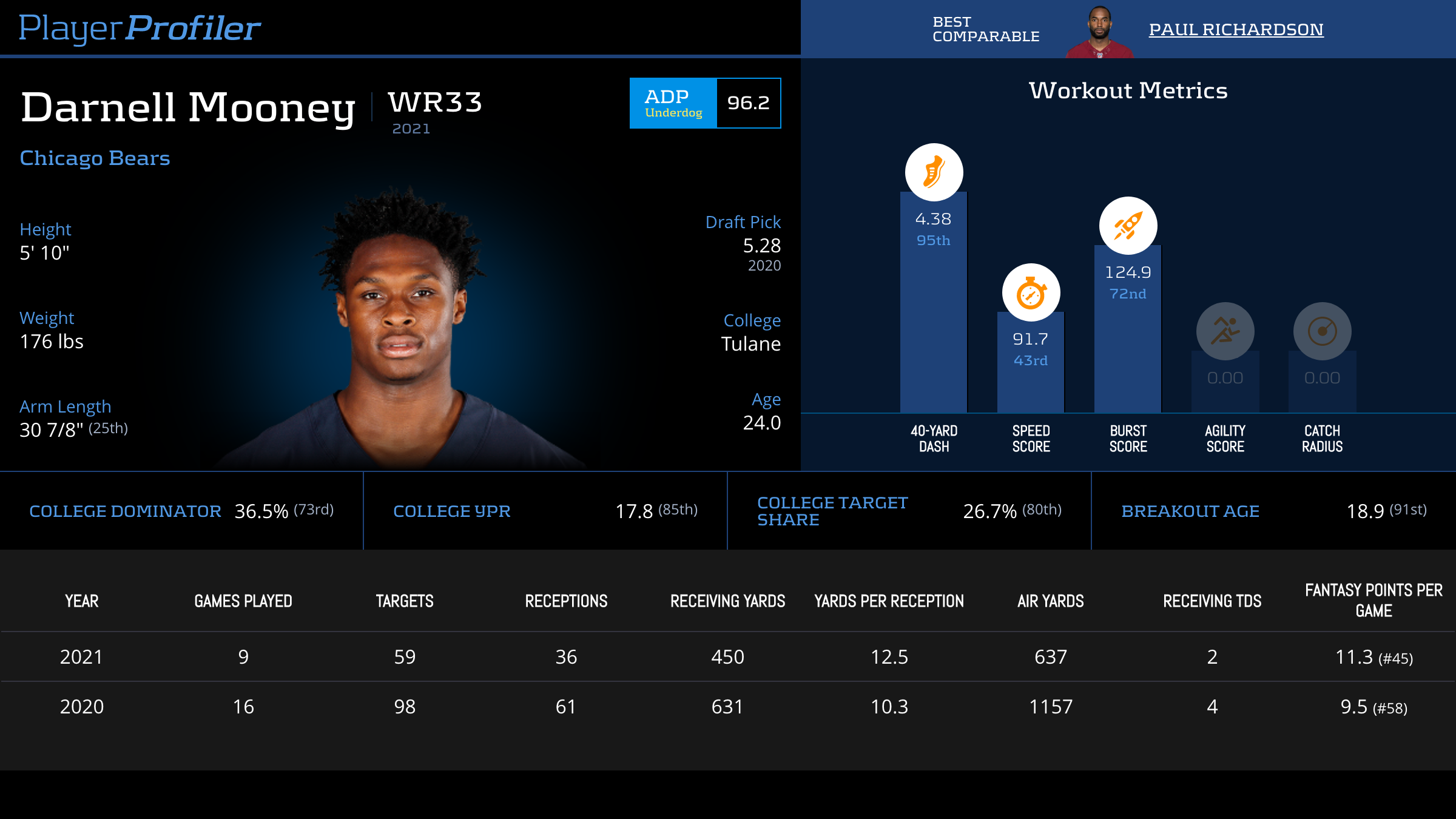 With a 25.4-percent (No. 16) Target Share heading into a Week 10 bye, Darnell Mooney looks like Justin Fields‘ top target. Mooney has seen 20 targets his last three games and has a 93.2-percent (No. 14) Route Participation this season. Meanwhile, the Ravens are allowing big plays this season with a struggling defense. Baltimore has given up over 300 yards through the air in three of their last five games and constantly finds itself giving up large chunk plays. Mooney has 10 (No. 29) Deep Targets this season and Fields has 38 (No. 7 among qualifying QBs prior to week 10) Deep Ball Attempts. Mooney’s high usage against a Ravens defense that allows big plays through the air bodes well for him this week. 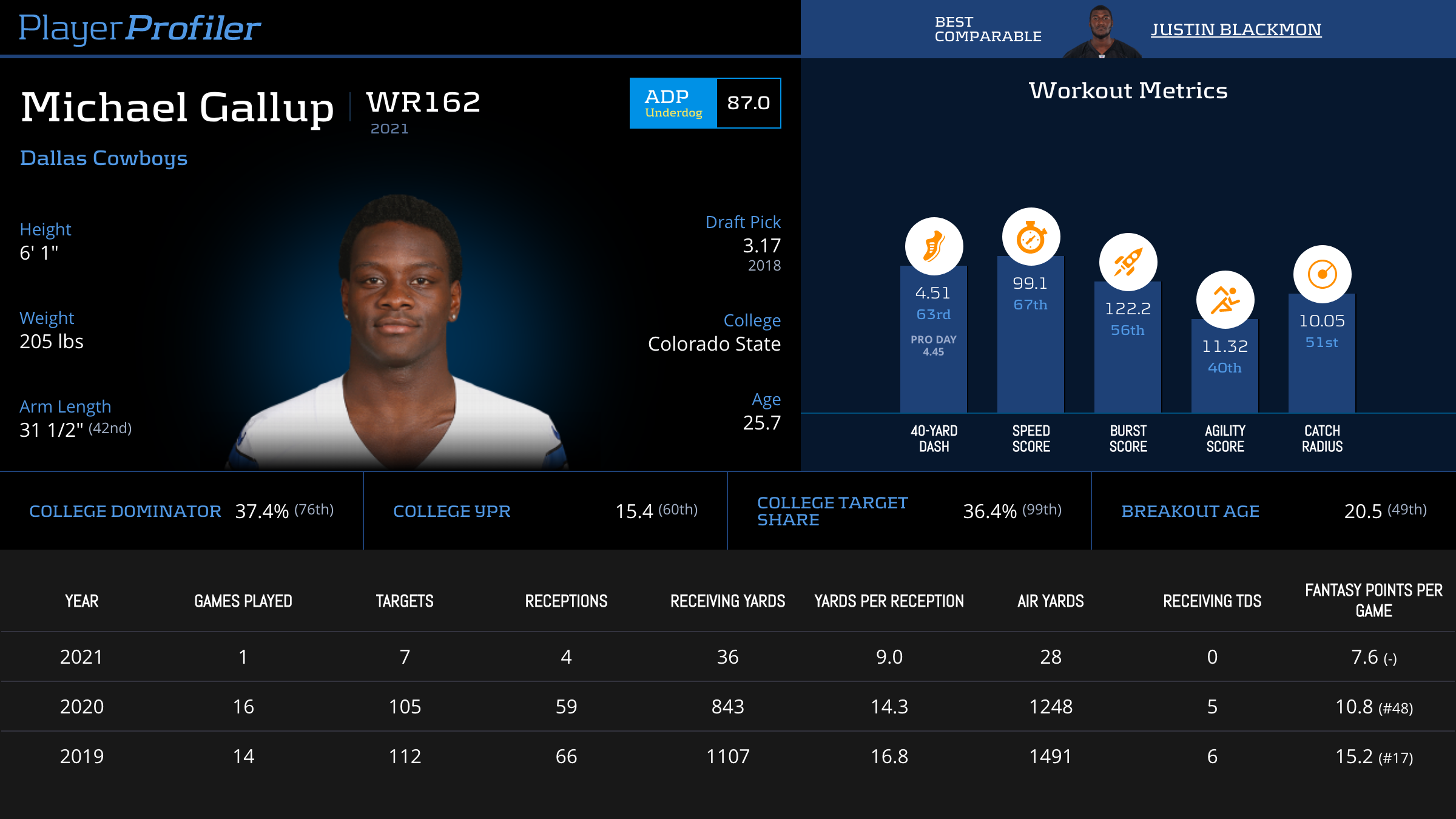 Coming off injured reserve last week, Michael Gallup had 3 receptions on 5 targets in a blowout win. CeeDee Lamb and Amari Cooper are ahead of him on the receiving chain, but there is still plenty of receiving work to go around for Gallup. Dak Prescott has thrown over 50 passes in a game twice this season, and the Cowboys averaged 37.1 (No. 13) pass plays entering Week 10.

The Chiefs secondary, while better the last couple games, is still bottom five in receiving yards allowed in the league. Slot corner L’Jarius Sneed is the only Chiefs corner in the top 40 of PlayerProfiler’s Cornerback Rankings through Week 10, and Gallup does not spend much time in the slot. Expect him to have a good game as he continues to work back from injury this week. 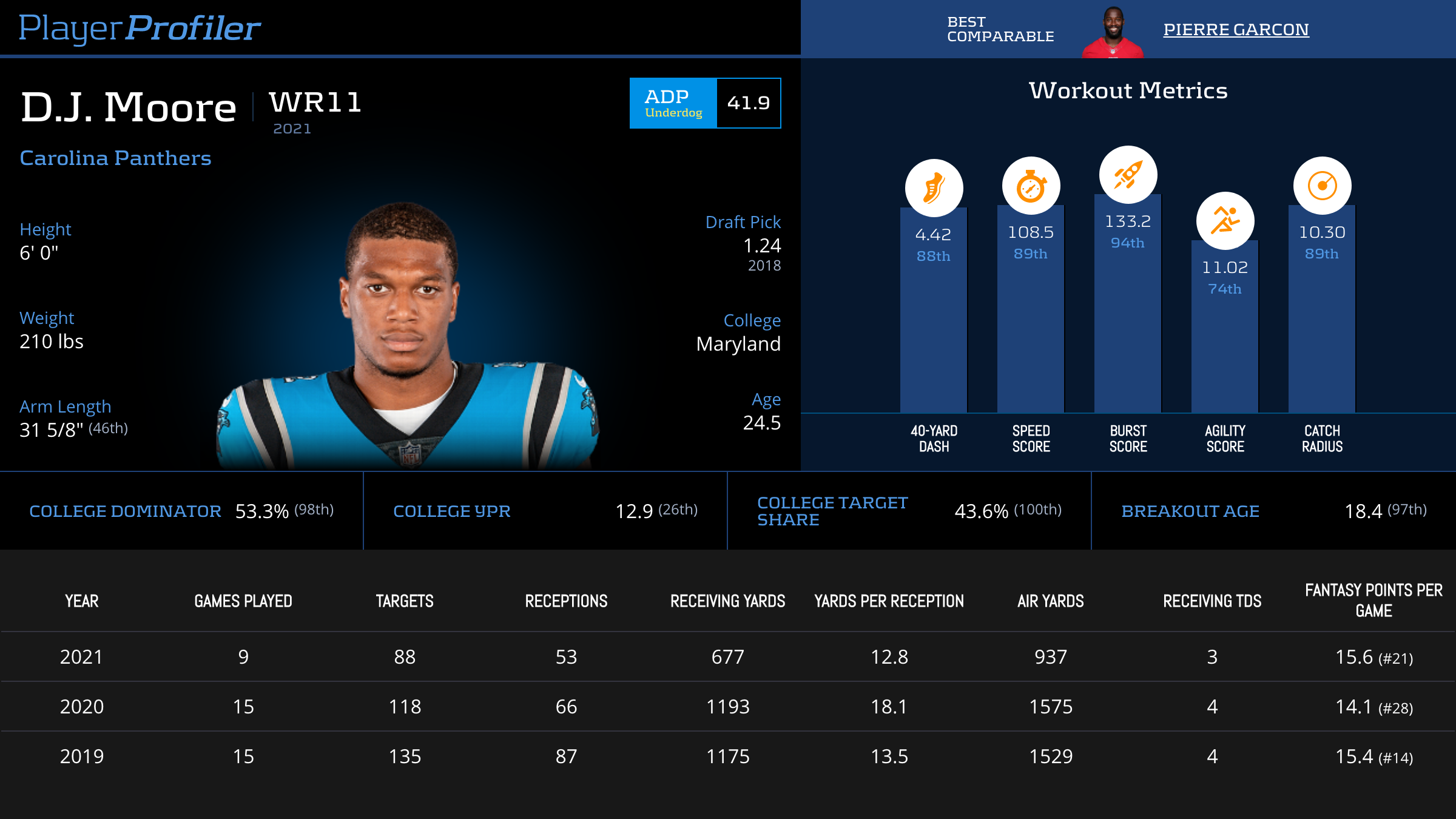 Carolina has had a bit of a QB carousel this season. P.J. Walker got the start last week, but Cam Newton returned for a few plays as well. Throughout this, D.J. Moore‘s fantasy production has been teetering. Despite a 28.9-percent (No. 6) Target Share entering Week 10, he averaged 15.6 (No. 21) Fantasy Points Per Game before putting up 6.2 PPR points in Week 10. Moore has not finished as a top 20 WR since Week 4, with just one top 35 finish in that time. Washington just shut down Tom Brady and Tampa Bay, giving up just 220 passing yards and snagging 2 interceptions. The Football Team has not allowed a 100-yard WR since Week 1, so don’t expect Moore’s production to jump back up this week. 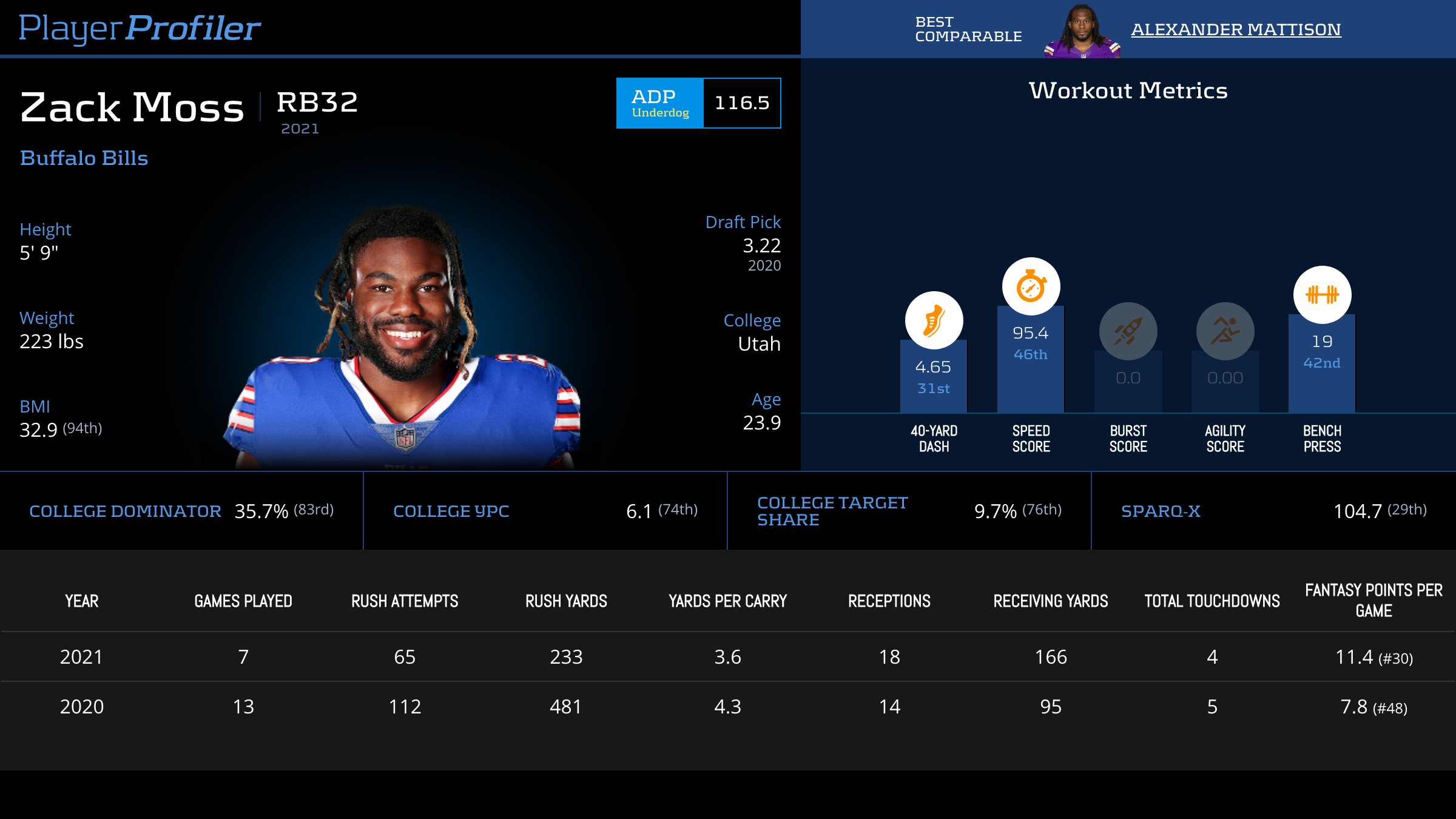 The Colts’ defense has been solid against opposing RBs this season. While they are middle-of-the pack in rush yards allowed, the Colts have allowed 4 rushing touchdowns (two from Jacksonville last week) and forced 7 rushing fumbles this season. Meanwhile, Zack Moss has been splitting work with Devin Singletary, and recently, Matt Breida. Entering week 10, Moss received a 51.7-percent (No. 29) Opportunity Share with 0.89 (No. 28) Fantasy Points Per Opportunity.

While he has seen more receiving usage this year, Moss is still seeing around 3 targets per game, while Singletary gets around the same. Moss is the most-owned Bills RB, so more fantasy players will look to start him. However, his medium receiving usage, split opportunity, and the Colts’ touchdown-preventing defense indicate a less-than-ideal matchup for him. 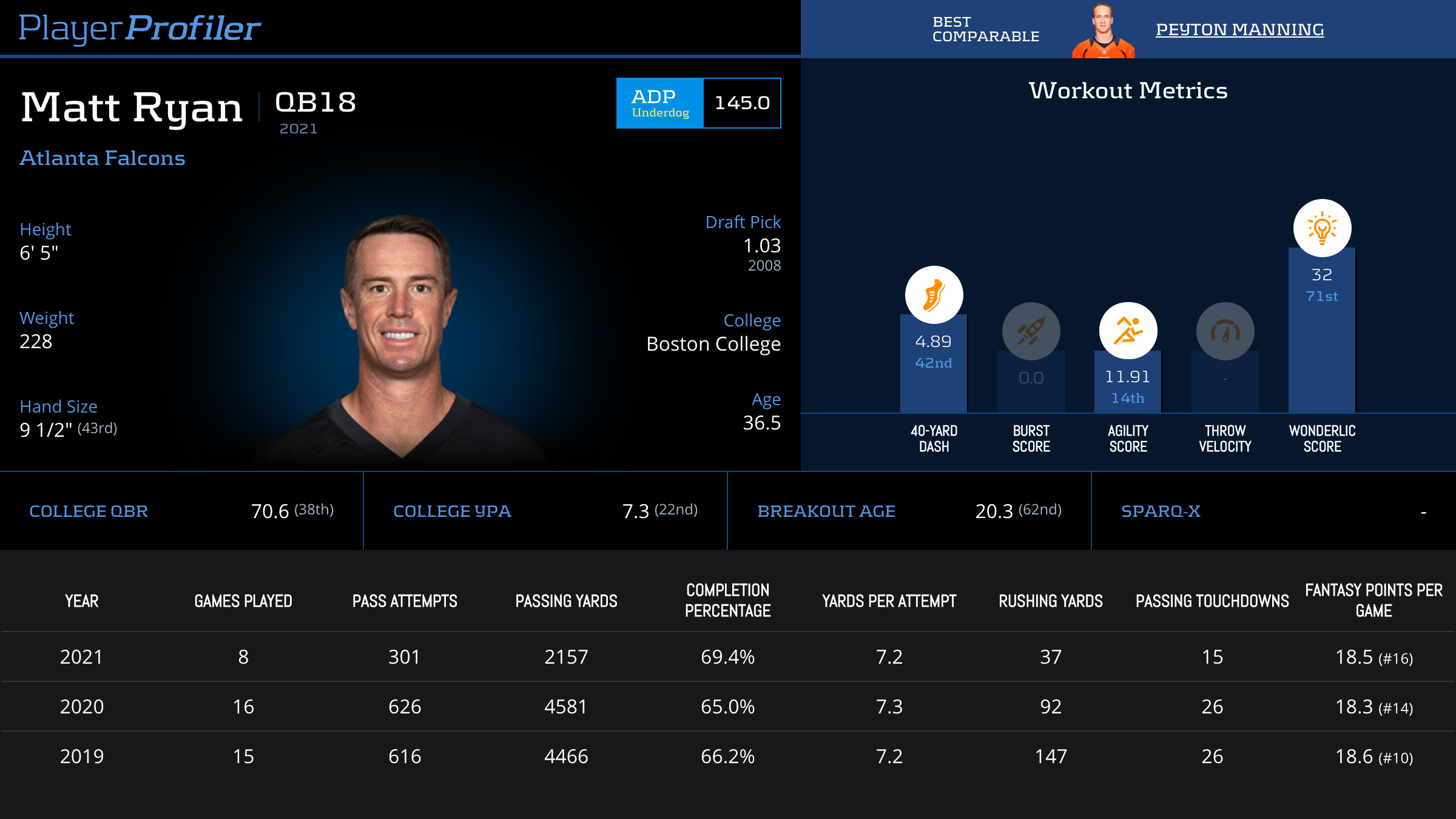 Falcons QB Matt Ryan is not widely rostered but is still a potential borderline starter in SuperFlex/2QB leagues, entering Week 10 with 18.5 (No. 16) Fantasy Points Per Game. He struggled greatly in week 10, throwing 2 interceptions against Dallas. With Calvin Ridley out, Ryan only has Kyle Pitts and a sparse receiving corps to throw to. Not to mention, Cordarrelle Patterson is hurt now too. The Patriots have been a good pass defense this season, allowing over 300 passing yards just twice this season. They have not allowed more than 200 passing yards each of the last two games. With Matt Judon bearing down off the edge and J.C. Jackson controlling the secondary, Ryan is not set up for a good game this week.