Las Vegas Raiders Wide Receiver Bryan Edwards has long oozed fantasy potential. Edwards has frequently crushed training camp practices and garnered an obscene amount of hype in the process. Those flashes of hype began to translate through Las Vegas’ first nine games of the season. Edwards’ role has steadily increased over the course of the season. Now is the time for him to take a leap into stardom.

Entering the draft after four years playing for the South Carolina Gamecocks, Bryan Edwards checked many boxes in spectacular fashion. At a gargantuan 6-3 and 212-pounds, he shot out of a cannon, posting a 4.53 (57th-percentile among qualified wide receivers) 40-yard dash. When adjusting for size, his Speed Score reigns supreme over many prospects in PlayerProfiler.com’s database, ranking in the 79th-percentile. He was not strictly an athlete who happened to play wide receiver, either. He matched his sublime athleticism with big-time production at the college level too.

Edwards first broke out in college at 17.8 years old, the youngest breakout age ever recorded on PlayerProfiler.com. His 48.4-percent College Dominator Rating is stout as well, ranking in the 94th-percentile. His 29.1-percent College Target Share ranks in the 88th-percentile as well. All this was accomplished despite the fact that he shared the field with NFL talent while in college. The most notable of teammates he shared the field with were Deebo Samuel and Hayden Hurst. Both of whom were drafted with round one or two draft capital. 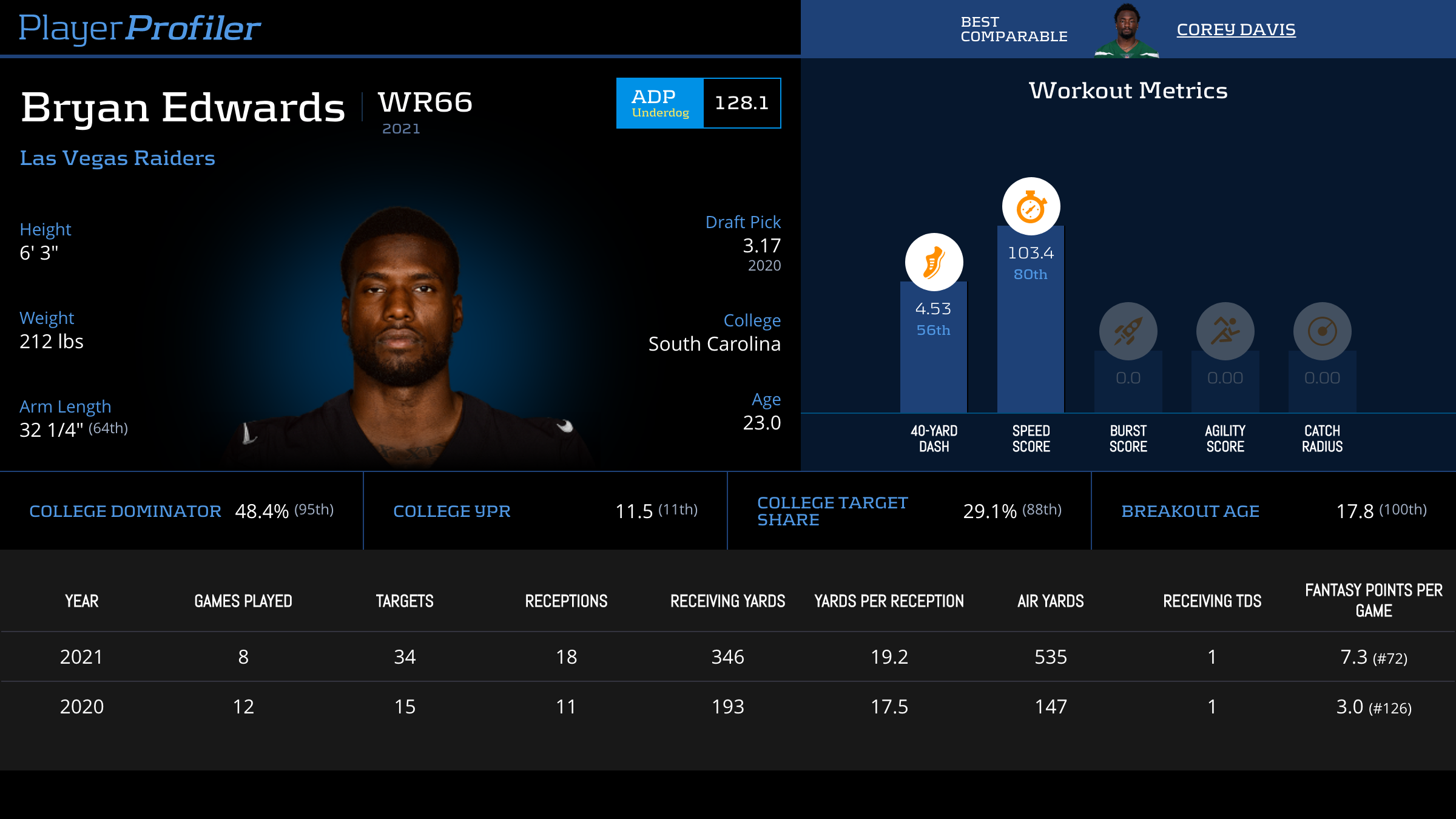 The NFL talent that Edwards played with at South Carolina was not limited to Samuel and Hurst, either. Fellow receiver and 2021 sixth-round pick Shi Smith, now a Carolina Panther, played with Edwards. Multiple running backs during his Gamecocks tenure elevated to the NFL too. Ty’Son Williams made his mark with the Baltimore Ravens after injuries ravaged their backfield. Rico Dowdle is currently a Dallas Cowboy after toting the rock for South Carolina. Dowdle looked the part during preseason action before suffering a season-ending injury.

Edwards wasn’t stranded in a barren wasteland. He competed with legit NFL talent and still churned out a sparkling draft profile.

He had the resume to be selected much higher in the 2020 NFL Draft than he wound up going (third round, 81st overall), and he would have had he not suffered a foot injury during his senior season. Getting drafted in the third round is still significant draft capital, though. Now that Henry Ruggs is out of the picture, however, the Raiders don’t have a receiver with as much investment as they do in Edwards.

Bryan Edwards was a beast in college and now he’s manifesting that talent at the next level. In a league full of world-class athletes at wide receiver, His efficiency numbers rank on-par with the best. He is currently averaging 20.7 (No. 2) yards per reception and 11.4 (No. 7) yards per target. That is a testament to his talent. It also is a benefit having Derek Carr throwing him passes at quarterback.

Carr has been sensational this season. His play has revamped the Raiders’ passing attack into a potent force. Las Vegas ranks second in the NFL in passing yards per game (298.9) behind just Tampa Bay. Vegas ranks seventh in passing plays per game (39). Carr has not been bashful pushing the ball down the field. His 42 deep targets rank fourth in the NFL among quarterbacks.

Edwards has been featured heavily in that department. His Average Target Distance this season has been 16.3 (No. 4) yards downfield. Two other receivers have higher Average Target Distances. He has 11 targets deemed to be ‘deep’ targets. Of players on the Raiders’ roster, only Darren Waller has at least seven such targets. Despite how difficult it is to connect deep down the field, Carr has served such passes on a platter. Edwards’ Target Accuracy (how well a ball Carr throws to Edwards) sits at No. 42 among wide receivers. His Target Quality Rating ranks No. 23. Not only does Edwards have the goods to make the most of his targets, but Carr is giving him a ton to work with. It all was on display Sunday night, where they connected on three separate completions over 20 yards, one of which went for a touchdown.

Despite this production and talent, Bryan Edwards has yet to carve a consistent role in the NFL. He has played in 21 games over two seasons. The number of times he has generated at least five targets in those games? Only three times, all during this season. He has never registered more than four receptions in an NFL game and he’s only scored three touchdowns in his career. Darren Waller is and will continue to be Derek Carr‘s number one target. All of these are true. It is fair to be skeptical if Edwards will ever amount to anything worthwhile in the NFL.

However, he has proven to make the most of what work he’s received, and his opportunity should only grow from here.

Once Henry Ruggs was released, he and his 36 targets went out the door. Edwards has accumulated just 11.2-percent of Las Vegas’ targets this season, but 13.5-percent (at the time of Ruggs’ release) of those targets opened up. Why couldn’t he gobble a large percentage of those now vacated targets? With Ruggs out of the picture, the Raiders don’t have a receiver with the investment or draft capital that they do in Edwards. Working into a larger role makes sense. ‘

Hunter Renfrow actually leads the Raiders’ wide receiver room in targets on the season with 69, but his damage is done closer to the line of scrimmage. His role should largely stay the same. Zay Jones, Dillon Stoner, and DeSean Jackson are the only other wide receivers on the team at the moment, but they’ve combined to see only 14 targets this season. Jackson was not a featured part of Las Vegas’ offense in his first action with the team. The path is there for Edwards to usurp a larger number of targets from this potent passing offense.

Bryan Edwards is a monster talent at the wide receiver position. He is already producing at great efficiency and has room for more. However, he’s unproven at the NFL level. Yes, he’s only generated five or more targets in a game just thrice in his 19 game career. He’s never had more than four receptions in an NFL game. Darren Waller isn’t going away any time soon. That’s all understandable. However, Edwards has never had the opportunity that stands in front of him now. He’s never had the chance to truly become the alpha receiver he’s capable of being. This is what fantasy football gamers and managers have been waiting for. Now is the time for Bryan Edwards to become a star. Don’t miss out on the ride.