Predicting how vacated targets will be distributed is no exact science. Vacated target deniers (I like to call them Anti-Vaccers) will joke, “Hunter Henry had 92 targets last year, so that means Mike Williams is set up for 177 targets this year!” That’s clearly not how it works, and no one has claimed it to be. The reality is, most (if not all) vacated targets on a team will be filled somehow someway. The point is to get an estimate of what we can expect to see, but I’ll save the theory behind vacated targets for another article.

New Orleans, Detroit, and Tennessee are three teams with major roster changes, ambiguous situations, and plenty of surplus targets to go around. I covered the Saints in a previous piece, and now I’m here again to guide you through the vast wasteland that is the Detroit Lions and the “new year, new me” Tennessee Titans.

NFL coaches and general managers are pathological liars, it’s in the job description (see Belichick, Bill). The one time we know that executives cannot lie is in their transactions. The trade to acquire Julio Jones hints that the Titans are looking to pass more frequently this season. With a declining defense, mid-level Game Script, and more firepower in the passing game, Ryan Tannehill is set to blow his career high pass attempts out of the water. The World Famous Draft Kit has Tannehill projected for a whopping 562 pass attempts in 2021. This potential volume increase and the 224 targets left behind by Corey Davis, Adam Humphries, Jonnu Smith, and others leads us to the million dollar question: “Where are these targets going?”

Will the real dynasty WR1 please stand up? The A.J. Brown train was full steam ahead prior to the Julio Jones news. While the move does slightly hinder his 2021 upside, you’d be crazy to predict a volume decrease for one of the league’s most prolific pass catchers. Brown is the three-legged alpha. In each of the past two seasons he has finished top 10 among qualified wide receivers in Yards Per Target, No. 2 in Yards Per Route Run, top two in Production Premium, and top seven in Fantasy Points Per Target. That’s just the tip of the iceberg. When it comes to vacated targets, you should always chase the talent. Alphas eat first. With AJB already earning an elite Target Share, don’t be surprised when he stockpiles 140 targets.

If you think Julio Jones’ tank is running on E, think again. Last season at age 31, the future Hall of Famer racked up a +23.9 (No. 8) Production Premium, 2.7 (No. 3) Yards Per Route Run, and 2.15 (No. 15) Fantasy Points Per Target. These, among his other performance/opportunity metrics, are outstanding given his age. Coincidentally, Jones and Davis saw eerily similar opportunity metrics last season.

The only difference is that Julio is much better at the game of football, even at 32.5 years old. The Titans wanted a better player to come in and fill the role they carved out for Davis, and Julio is that guy pal. We can expect Jones to see similar target volumes to what he and Davis have seen in the recent past, but with a marginal increase due to the expected increase in volume. Add an extra game on top of all of that, and we can easily peg Jones for 110-plus targets in 2021.

Josh Reynolds was the sleeper candidate of the year prior to the Julio Jones trade, but now that dream has become a nightmare. In training camp, mostly for incoming players, no news is bad news. With Reynolds sidelined currently with an injury, the lack of buzz or even an appearance points to him not seeing any sort of significant role in this offense. He’ll be the cemented WR3, but Tennessee deploys three-receiver sets sparingly. As tracked by Warren Sharp, the Titans ran their most three-receiver sets out of 11 personnel, but only utilized this grouping 38-percent (No. 31) of the time. Conversely, Tennessee ran 12 personnel (two-receiver sets) 35-percent (No. 1) of plays and 21 personnel 10-percent (No. 9) of plays.

Given Reynolds is the slot man by consequence in this offense, a role the Rams handed him in a mere 20-percent (T-No. 63) of his snaps, and the frequency of two-receiver sets the Titans use, he is in an uphill battle for playing time and target volume. His brief production history isn’t anything to gawk at, either. Reynolds posted a depressing 1.27 (No. 91) Yards Per Route Run average, -11.0 (No. 74) Production Premium, and 1.53 (No. 90) Fantasy Points Per Target while fighting for time against Van Jefferson in a pass-heavy Rams offense. He may be worth a roster spot in deeper leages, but you’re betting on other pass catchers getting injured for Reynolds to provide worthwhile production.

Anthony Firkser is another derailed hype train, however his outlook is more optimistic than Josh Reynolds’. Jonnu Smith and his 4.6 targets per game have walked out of the door, and there is now no threat behind Firkser to compete for looks. Considering the lack of competition and how both he and Smith were used last season, the case for Firkser is an intriguing one. Smith displayed efficiency in his role, while Firkser did not. Firkser wasn’t awful by any means, but his -3.4 (No. 14) Production Premium, and 1.58 (No. 28) Fantasy Points Per Target indicates he provided average efficiency in both fantasy and real-life football. 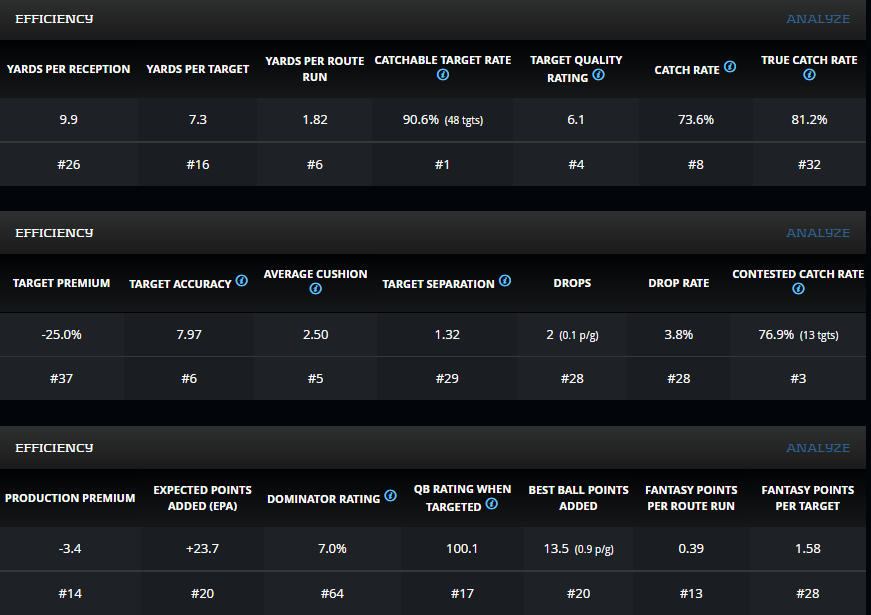 That being said, the way Firkser was used behind Smith undoubtedly made it more difficult to flash in the statistics department. His -25.0-percent (No. 37) Target Premium tells us his targets were not fantasy friendly ones. Now he’s staring down the barrel of the featured tight end role, and will see a much needed increase in red zone targets. His talent and ability to play in the slot graces him a desirable upside, but the usage uncertainty and the lack of a solid production profile makes him a cautionary tale. Expect Firkser to see between 65 and 75 targets this season. A low target volume and an inability to play an every down role will likely lead to disappointment most weeks for shareholders.

Detroit’s offensive roster was shaken up more than a bagged goldfish that a small child won at the county fair. Former field-maestro Matthew Stafford has left the building. In his place, the illustrious *checks notes* … Jared Goff. Kenny Golladay, Marvin Jones, and Danny Amendola have also packed their bags and leave a slew of opportunities for retained pass catches and newcomers Tyrell Williams, Breshad Perriman, and Amon-Ra St. Brown. The downgrade in talent and new head coach Dan Campbell’s lack of commitment to being a “system guy” breeds caution for fantasy gamers. Still, with 360 vacated targets, there does exist potential to take advantage of in fantasy drafts.

Anthony Lynn coming to the motor city as the Lions offensive coordinator is a blessing for D’Andre Swift. We know that running back targets are schemed more often than they aren’t, and that particular facet of football is Lynn’s strength. Swift saw 57 (No. 13) targets last season, and is rightfully expecting an increase. Dan Campbell wants to get his playmakers in winnable one-on-one battles, and Swift running routes against linebackers checks that box. Look for him to see significant uptick from the he was tragically handed in 2020. He was efficient with his rookie target volume, posting 7.8 (No. 11) Yards Per Reception and averaging 1.69 (No. 6) Yards Per Route Run. If Swift is used correctly this season, his efficiency and production floor gives him massive receiving upside.

T.J. Hockenson’s breakout party was not one to miss. Facing heavy competition for targets, Hock-daddy still earned himself 101 (No. 5) targets, an 18.0-percent (No. 10) Target Share, and a 15.5-percent (No. 13) Air Yards Share. This list doesn’t stop there. He also finished top 10 in every PlayerProfiler-listed productivity metric for tight ends. 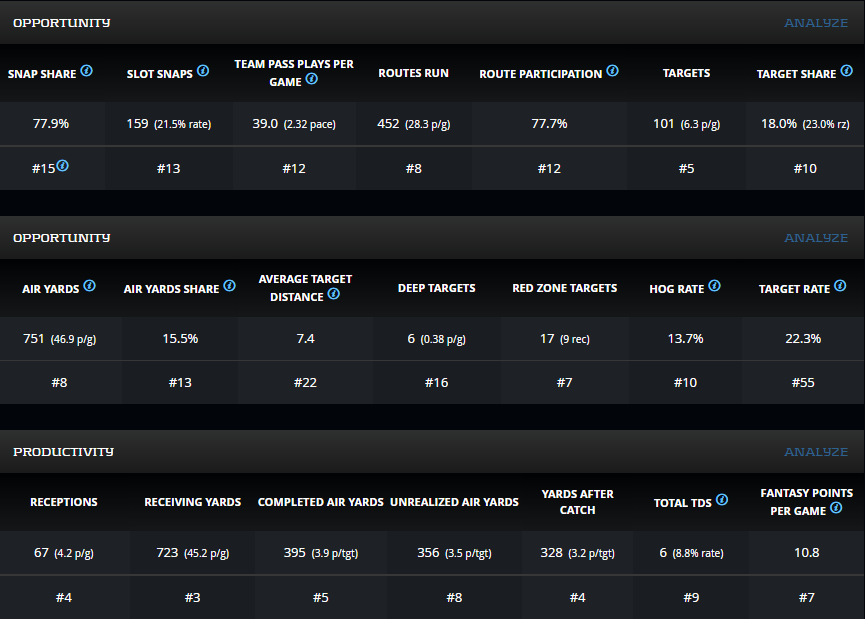 Hockenson’s skillset perfectly fits that of Jared Goff, who prefers to throw shallow passes and let his pass catchers do the grunt work after the catch. The Lions have no true alpha at the wide receiver position. Hockenson is their alpha. If you’re keeping track, that makes his situation similar to Darren Waller’s last season. I’m not calling 140 targets. I am calling that Hockenson will be the bonafide go-to target for this offense, and the first read on many plays. Somehow he is a value in drafts right now. If you still aren’t convinced, just know if you take Mark Andrews over Hockenson this year, Josh Larky will definitely no longer be your friend.

Had to cut a lifelong friend out of my life earlier today ?

It’s tough being open/honest on Twitter but I tried to share my story in this video, hopefully it can help just one person ☺️ pic.twitter.com/1UGjNbuvgK

Tyrell Williams has been used as a decoy-X for the majority of his career. In his past, he’s seen high Snap Shares and route percentages, but only 64 targets in each of his past two seasons. When he was targeted, however, Williams performed well. In both 2018 and 2019 Williams cracked the top 15 in Yards Per Target, the top 15 in Fantasy Points Per Target, and the top 10 in Production Premium.

The major issue with Williams is that he’s a low-floor/low-ceiling player who won’t be a target priority in Detroit. He finished below 10 fantasy points in 60.7-percent of his last 28 games, with only three games over 20 points in that span. While he does walk into the number one receiver role in Detroit, you know what you’re going to get out of him this season: a few random weeks of usability.

Why have one Tyrell Williams, when you can have TWO? Breshad Perriman is a less efficient Williams with more straight-line speed. His recent floor-ceiling combo also mirrors that of Williams. Perriman failed to score 10-plus fantasy points in 57.7-percent of games in his last two seasons, with three games of 20 or more points. Bring out the Spiderman meme again.

Perriman’s 59 (No. 72) targets, 16.8 (No. 9) Yards Per Reception, and 15.2 (No. 8) Average Target Distance without significant production totals to pair with it screams field stretcher. The icing on the cake? He scored less than five fantasy points in six of his 12 games played in 2020. Perriman has flashed sparingly, but he’s proved that he can’t be trusted on a weekly basis.

Amon-Ra St. Brown’s college production and workout metrics are *gulps* not the most promising. The USC slot receiver did manage to break out his freshman year at age 18.9 (91st-percentile) and rack up a 1,000 yard season with Michael Pittman still on the team. However, his 4.66 (14th-percentile) 40-yard Dash time, 11.16 (59th-percentile) Agility Score, and 22.6-percent (63rd-percentile) College Target Share raises concerns. When you watch him play though, you can clearly see his talent. He runs solid routes, makes contested catches, and has solid footwork in the open field.

Given what we know about Tyrell Williams and Breshad Perriman, it’s not out of the question that St. Brown is the most talented wide receiver on this roster. The rookie’s skillset pairs up nicely with Jared Goff’s. While Williams and Perriman open up the defense, St. Brown will work underneath and could be funneled targets. Realistically, expect all three of these Lions wideouts to see between 65 and 80 targets. All three have scary low floors, but St. Brown has the highest upside of the group because of his skillset and Goff’s throwing tendencies.